Finished games are posted here, once they've been tested and are ready for wide release.
Forum rules
Adult content should not be posted in this forum.
Post Reply
69 posts
Message
Author

Story
Chrysandra is the crowned princess of Novaria, but she is not first in line for the throne. To rectify that grave injustice she has decided to get even with the whole kingdom and get a dragon to help her in her mad grab for power (or in burning the place to the ground).

Of course procuring a dragon for her evil schemes is not always easy, and with a do-gooder mage hindering her, she might have to think about very crafty ways to get what she wants.
Will she succeed? Will she fail? Will she fall in love?

The Scheming Chrysandra
Our lovely princess who wants what is not-so rightfully hers - the throne.

Cyril the Competent
He has the job that nobody wants, guarding the dragons. It's too bad he's so meek that he hasn't been able to stand up to the rest of the council of mages.

The Dastardly Balrung
Balrung has been imprisoned for a long time, due to a long lost love who rathered die than get kidnapped by the calculating Balrung. Now he's a bitter, old dragon with more than a few tricks up his sleeve.

The Insatiable Niir
Niir sees people as his playthings, he only sees entertainment value in anything he does. Besides mentally undressing the protagonist, he plays tricks around the castle and is itching to get out of there. But at what cost?

AND CONGRATULATIONS ON FINISHING!!!

Edit: Actually, are the download links up yet? I can't seem to find them on either site? DD:
Completed: Elvine (GxB), The Life Threads, Helena's Flowers (GxG)(As Writer, Coder), Dr. Frank's Build-A-Boyfriend (BxB), Beyond the Deep (GxB)(As Artist), The Bog's Heart, The Girl with the Gray Hair Awakens, The Far Rings, NB107A.

All available to play on my itch.io page!
Top

At last!
The files are downloadable from itchio: http://godline.itch.io/wanted-dragon
Please tell us if something is not working.
Enjoy!

Yay it's done i've been keeping eye on this game for a while and atleast it done!
Top

Haha! Finally! Congrats on the release, am downloading it right now and will get back to you soon!
Top

Thank you so much for that xavimat! You're a lifesaver! (I'll update Indie DB at a later date).

I hadn't had a chance to put these up earlier, but for all who have done playing:
QUESTIONS
1. What ending did you get first?
2. Were there any characters you were immediately drawn to?
3. Would you like to see a voiced version of this somewhere down the track?
NEW STUFF: https://twitter.com/intrigueVN

Congrats on finishing your NaNo! The title and premise hooked me from the start. I haven’t finished the whole game yet, but it’s a ton of fun so far! Good villain protagonists can be challenging to write imo, but Chrysandra is just so witty and charming and shamelessly evil that I can’t help but love her.

The dialogue is general is great and made me laugh a lot!

I also like how you played with unconventional shapes for the GUI (the torn paper, etc.). Sometimes the contents would run off the paper or into the border (like the bars on the prefs screen, or some text on the choices), but maybe that adds to the quirky charm? ;D The music also has a lot of "quirky charm" and does a great job of playing up the comedic tone.

The dragon forms in the CGs are actually really cute imo! It’s too bad the dragons aren’t shown outside of the CGs (like when Chrysandra transforms into a dragon, her normal side sprite is still shown). But that’s totally understandable given the NaNo timeframe!
1. What ending did you get first?
I got Balrung’s bad ending
where he married my sister. I was actually aiming for the solo/independent ending, but that turned out to be worse. D:
2. Were there any characters you were immediately drawn to?
Evil protagonist ohohoho~.

3. Would you like to see a voiced version of this somewhere down the track?
Hmm, I don’t know. I usually click too fast to listen to the voices, and even pro VA sometimes sound cheesy imo. But if you find suitable VA, then sure, why not. If you’re planning to add more stuff later, CG/Ending Replay/Music Galleries in the Extras would be great too. :3
Complete: a2 ~a due~ (music, language, love)
In progress: The Pirate Mermaid (fairytale otome)
On hold: AXIOM.01 (girl detective game)

Concept grabbed me immediately! Downloaded and loved the music and GUI right off the bat, looking forward to playing more when I have time.
My Visual Novels
Asher | Tell a Demon | The Empress of Aeser
Top

Congratulations on finishing your game! =) I just finished my first playthrough and it was awesome. I loved the dialogue and the characters.

1. What ending did you get first?
Cyril's "Dragon Queen" ending! Who wouldn't want to be a dragon?
2. Were there any characters you were immediately drawn to?
Cyril (he is adorable!) and, of course, the MC!
3. Would you like to see a voiced version of this somewhere down the track?
Not really, I dislike voiced visual novels (maybe with the exception of TMGS2...)

Well, guess I am going to see what other endings I can get now!

1. What ending did you get first?
Balrung’s: Queen's Gambit ♥

2. Were there any characters you were immediately drawn to?
Balrung hehe~

3. Would you like to see a voiced version of this somewhere down the track?
Yes, it would be cool! Niir talking with all of those "sss"

BUT, I have a problem. I can't save. When I try, an error window appears. Help? 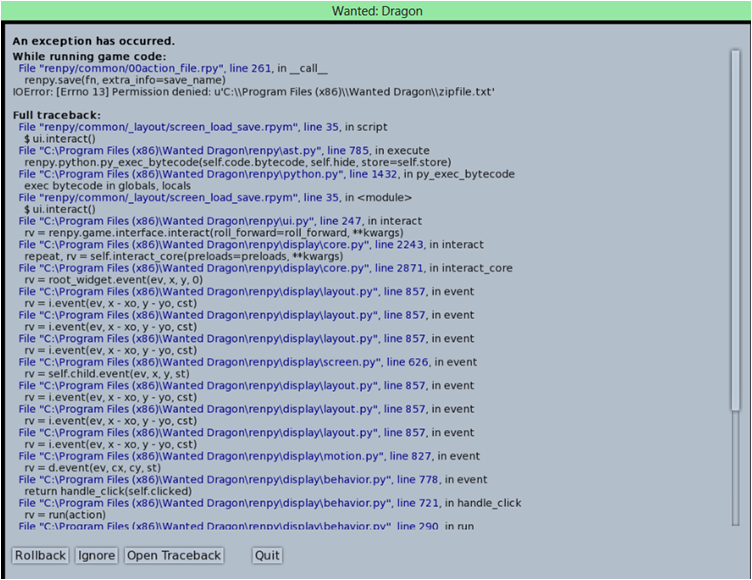 Thanks, Kirlett. I'm looking at it.
For now, try using the PORTABLE version. Your save games and unlocked endings should work the same.

Thank you! Actually, it's fine. The game is short so I can skip it until I find the choice I wanted.
Top
Post Reply
69 posts