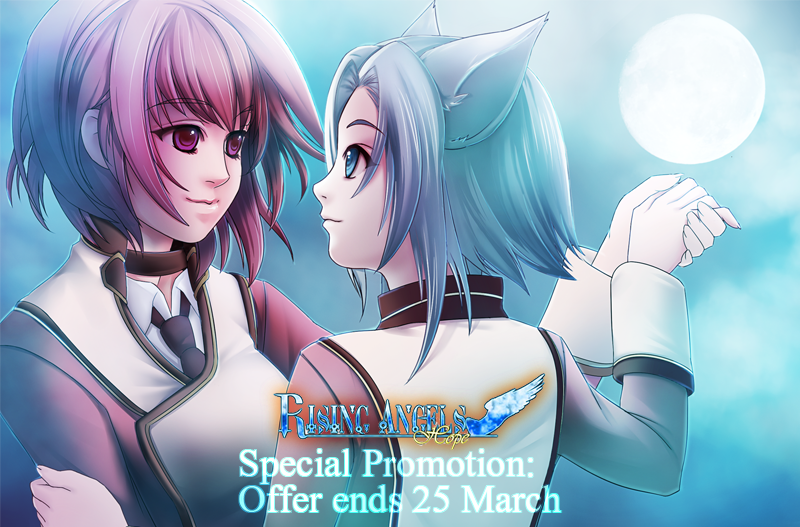 Rising Angels: Hope is the story of Faye Moonfallow, her squad of somewhat loveable misfits, and their dreams of joining the Katajion Space Force. However, before they can get there, they have to first pass the rigors of the Space Sector Academy. Can Faye and her squad overcome the challenges posed to them or will the group destroy itself in chaos? Each day is an adventure as the young researcher tries to find her new place in the galaxy and maybe friendship and maybe even love.

The remake allows the choice of different paths to the ending and the ability to pursue the affection or love of one of three girls, a feature that was missed in the original freeware game. The story has also been rewritten and includes new and modified scenes that were improved upon also thanks to our backers' feedback.

Features:
- Expanded remake of the original Rising Angels story, Rising Angels: The Red Rose
- 8 - 10 hour adventure spanning Faye's year
- 10 CGs (soon to be patched with 2 additional ones to add more romantic moments!)
- Options to help guide Faye through her adventure and choose different friendships
- Unlockable gallery with unseen images from both the original game and the new, improved remake


Rising Angels: Hope is a Yuri visual novel with 3 parts that will be released as free updates. The combined parts adding up to an 8-10 hour adventure of love, mystery, and growth.

Thank you for reading! We hope you'll enjoy Rising Angels: Hope and please let us know what you think! We'd love to hear your comments and impressions! Particularly if you have a favorite pairing!

Re: Rising Angels: Hope [GxG] Commercial (33% Off Until Mar

Will this game be available for purchase other than through Steam?

Re: Rising Angels: Hope [GxG] Commercial (33% Off Until Mar

Will this game be available for purchase other than through Steam?

Not at the moment. As Steam allows for active updates, which is how we are doing the episodes, we will be keeping the game only on there until all episodes have been released. After that, we are considering our options.

Thank you for your response. I will just cross your game off my to buy list, even though I enjoyed the demo.

by Renmiou
The second episode is out now and the final two CGs have been drawn. I'm just dropping by to leave a sneaky preview!

by KomiTsuku
The final episode has been released!
All times are UTC-04:00
Page 1 of 1
Powered by phpBB® Forum Software © phpBB Limited
https://www.phpbb.com/