Finished games are posted here, once they've been tested and are ready for wide release.
Forum rules
Adult content should not be posted in this forum.
Post Reply
15 posts • Page 1 of 1
Message
Author 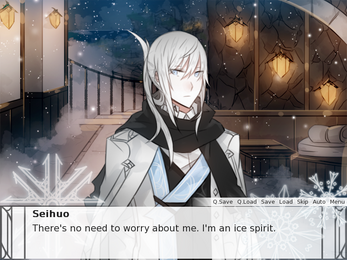 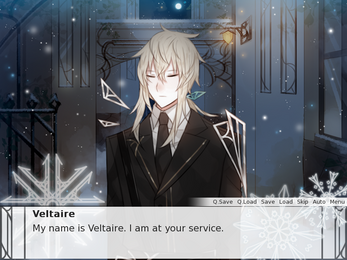 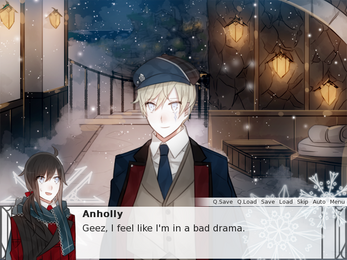 Story
This is game 1.5 in the Magical Otoge series, an interlude between Ciel and Melanie!
Anholly is the only person who lives in the freezing town of Solvalis. One day, she meets a dying ice spirit who has resigned to his fate. She takes it upon herself to convince him otherwise and to find a way to save him...

This is a straightforward visual novel, so there's no walkthrough necessary.
It's a free game/pay what you want and takes about one hour to play. Anholly: The protagonist. A bubbly girl who makes the best of her situation. Sometimes pretends to be more cheerful than she actually is.

Seihuo: The dying ice spirit who meets Anholly. He seems to be cold and emotionless most of the time, but he thinks a lot to himself. Very sarcastic.

Riov: Anholly's childhood friend, and only friend. He's young but quite mature, though he is lacking in social skills.

Veltaire: A mysterious and polite man who visits Solvalis in order to observe something...
Download Link
https://batensan.itch.io/magical-otoge-anholly

Share it with your friends so you can cry (half-joking) together!! Thank you for playing and sharing this game!!
Check out my art blog on tumblr (batensan.tumblr.com) for more on Magical Otoge or my twitter for all the times I yell about my stories.

I'm very nervous about this game, but I hope people enjoy it!
Feel free to compliment me to refuel the vast life energy I spent on this game. Really, if you enjoy my work and want to see more, compliment me and tell me what you liked!
(By the way, please don't compare which Magical Otoge you like better right now! It's not valuable as data right now.)
Last edited by Batensan on Fri Jun 03, 2016 5:31 pm, edited 18 times in total.
Top

YES!!
I looooved Magical Otoge Ciel so I'm super excited to play this one!!

[EDIT] So I've returned after playing the game and going through all options!
Although the application and I got off to a bad start (game suddenly crashed on me with no warning and the music was reduced to an incessant beeping, which played even though the program had stopped running - I restarted my computer and it went away), I tried running it a second time with no problems! [RE-EDIT] I also had this problem after replaying Ciel, so it's possibly it's my computer?

The characters were all very lovable (I particularly liked Seihou because tsundere!), including "Ghosts of Games Past"

Anholly's chipper attitude in the face of absolutely anything was pretty refreshing and comedic.
I got a few nice chuckles from it and it brightened my evening~
I couldn't really bring myself to cry thanks to the fun view of their afterlife.

Thanks a lot for your hard work!

Can't wait for the next one in the series! I hope our favorite characters make some cameo appearances

Answers:
- Who was your favorite character(s)? What did you like about them?
My favorite character was probably the ice slime. An odd answer, I know. The art for them was very cute, as was their language. I enjoyed seeing slimes in Ciel as well, so I hope you continue to include them in the series!
- What were your favorite parts?
My favorite parts were both towards the end, when Anholly basically sacrifices herself for Seihuo's well-being. I thought that was a very touching moment in the story. I also liked Seihuo's rivalry with Veltaire ("I gave her a dying confession! Top that!").
- How did you feel at the peak emotional moments/ending?
I probably wasn't as sad as I was supposed to be, because their deaths didn't come as a surprise. I would say it was a touching story, but the comedy kept it from being depressing.
Last edited by sangoandmiroku799 on Sun Apr 03, 2016 8:51 pm, edited 3 times in total.
Top

I've been playing through the Nano VNs, and this one is just so cute! I really love the character art, and their designs - especially Seihuo, he's so lovely... Long haired anime boys are super pretty ehehe...
The CGs were also really, really cute - they look so soft and pretty. I'm impressed you got so much done in only 1 month!
Ah, the use of the snow falling effect was really nice, too - it made the screen look a bit livelier, and added to the general atmosphere of the story.
You did a really, really nice job on the GUI, too. I especially love the save/load menu - and all the white/light blue colours used throughout the menus added to the theme of the story. It was really nice and cohesive, and made the reading experience feel more complete.
The music, too, really helped with the atmosphere. So nice ///

Some of the puns were pretty funny, and the callback to Magical Otoge Ciel (ghosts of games past XD), but I think
this quite light-hearted writing style maybe contrasts a bit with the pretty sad ending? I'm also a fan of 4th wall breaking jokes, if used sparingly, but it seemed there was quite a lot of meta comedy, and I don't think you need to write in the text itself 'you fell over, for plot convenience!', since it can break immersion and take you out of the story - which is a shame since all the elements of this VN (visuals/music/graphic design) work together so nicely. I know some people like this kind of humour more than me, though, so I imagine other people wouldn't be bothered by it.
Also, the jokes about if the dog is really a dog... Was that a crack at your own art style? If so, you shouldn't worry - HD was really cute, and definitely dog-like XD;

But I liked how pacy the writing was, and how it went through scenes relatively fast, while still feeling there was enough depth to them. The conversations between the characters were done well, and their dialogues felt realistic, and different from one another. I got a pretty good sense of Anholly as a character, and I grew to like her a lot.
Her very cheery personality, in the face of a really tragic backstory and a pretty tragic situation, made her pretty likeable, so I was sad to see what happened to her.
Also, I think Anholly pairs the best with Seihuo... But that's just my opinion XD; They're super adorable...
I have a lot of free & commercial VNs available on Steam and itchio.io if you want to check them out! ☆
Top

I love love loved Magical Otoge Ciel, so I've (along with my friend, whom I can cry with) been waiting for this!! It looks super good. And congratulations on finishing in time!
Top

*glances at the papers piled up beside her laptop* I-I'll play after I get through my exams.

I'm glad to see that people have been enjoying this game! I've added some generic questions in the first post if you don't know what to say after finishing the game. It's good to see people's progress on NaNoRenO!
Top

I cried so much!

Still halfway but what should I say... It's sweet!
Really like those snow slimes just like "Bwa~" Bwa~~~~~~~
The snow slimes are irresistably cute! And their sound is like Pook!!~
Seihuo is so sarcastic, I like it. *u*
Hahahah it's funny that Riov is so JEALOUS!
Games at Pastelle Studios/~•Mimi's art thread•~/Item End Jam! 2016/Resources~

I finished the game, and I cried at the bathroom!!!!
This game is so touching.

Thank you! I'm always a little surprised when my stories make people cry but I'm glad that I as able to do so! I was really wondering if I would be able to do so with a game that only takes an hour to play, but it looks like I was successful with some people!
Top

You can now play online to Magical Otoge Anholly: http://sandbox-adventure.com/magical-otoge-anholly.html

The game is in full HTML5 so there is no need to download or install anything.
You have to register to save your game but not to play the game.

While in game, you can hit F1 to display a list of available shortcuts.

You can find more information about Sandbox Adventure Engine on this thread.

I played Magical Otoge Ciel and I can say that was an amazing VN so I'm excited for this one!

I just finished playing it and I can wholly say that I enjoyed the jokes a lot, (I practically laugh at everything so that may be why)

I'm not going to lie, I actually love the snow slimes more than the characters, just because they're super cute.

To be honest, I didn't like this as much as Ciel, but you did say it was a 1.5--it felt more like a filler with different characters. Other than that, the artwork and writing is still as spectacular as ever and I'm super duper hyped for Melanie!
Commissions open:
http://unclechristine.weebly.com/
Top

Woooow. . I'm really excited to play this game since i loved magical otoge ciel (especially anton♡♡ ~~)..i am sure i'll love this one too
Top

This was cute and sad and funny! Nice and succinct for a month's production! Thanks for putting it online, it was very convenient

I haven't played Ciel yet, but I'll probably get to it when I have more time.
The art is really pretty, and I liked all the fourth wall and puns in the writing. I didn't feel there was anything super new or original about the characters, and obviously there were some plot convenience things, but the comedy made it feel fresh and intentional so I didn't mind ;D

- Who was your favorite character(s)? What did you like about them?
Anholly~ her awkwardness and humor are so lovable though she was still much too perfect of a character to seem realistic X'D... And also HD!
but did i miss something?! i still don't know who HD is! someone tell me who he/she is!! i'm sorry i'm dumb!
- How did you like the story/character interactions?
Loved them! There was no place in the story when I thought the characters were having an off day, and I'm glad the interactions helped me get to know all of them

- What were your favorite parts?
When I got to choose weird things like say I was a masochist. When stupid things happened like those darn birds taking away my stuff [though it's too real when Anholly dies so soon...

]. Petting Riov's head.
- How did you feel during the peak emotional moments/ending?
Troubled because I didn't think I understood everything/ still don't think I understand everything. Distressed because Anholly is too altruistic to live. Kind of touched because all the characters were kind. The ending was still funny though so I didn't have to cry-- but if you changed up the music a bit and made it sad I probably would have cried-- though I'm kind of glad you didn't do that because I didn't want to cry? -- I'm all awkward now thanks to Anholly and Seihuo and all the main characters actually. Wow.
Anyways, congrats on finishing this! It was very enjoyable!