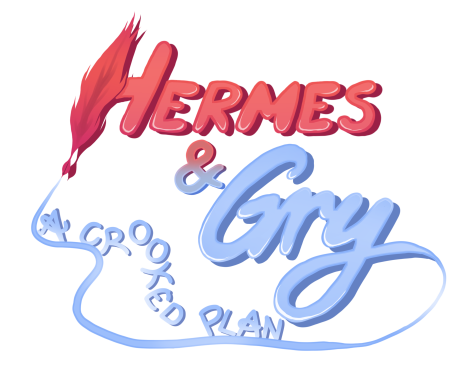 Play if for FREE on itch.io HERE

Sypnosis
It’s been three years since the Cataclysm brought ruin upon the world you once knew and destroyed any trace of hierarchy within it. There’s no better time to become the new world’s emperor! Equipped with an ego bigger than the universe you’re trying to rule and followed by your stupidly loyal assistant Hermes, you’re almost ready—now all you need is a plan…

Hermes & Gry: A Crooked Plan is a short comedic visual novel about the “hero” Gry’s first step to becoming an emperor. Gather information and tools to come up with part one of his master plan: turning “The Butcher”, the strongest warrior in the world, into one of your loyal minions. 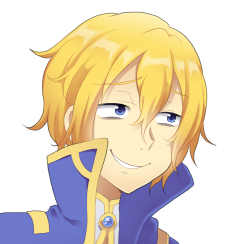 Gry Filorness
The protagonist, obsessed with glory and power, lacking any sort of moral compass. Will conveniently get rid of anyone standing in his way, including your imaginary friends. Oozes charisma but also sheer stupidity and a complete lack of self-awareness. 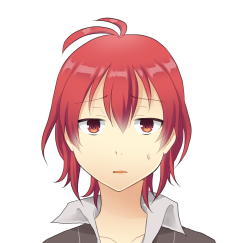 Hermes Ludwig
Gry’s assistant who does everything for him no questions asked. Should not be underestimated despite looking frail. No one knows what emotions are hidden behind these soulless eyes, besides unbreakable loyalty. Far more intelligent than Gry, except maybe for that one poorly thought-out choice to be his servant. 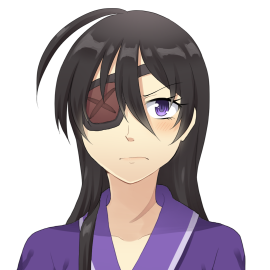 Arias Varsha
Once the strongest warrior in the world, known as “the Butcher”, she has lost all of her memories in the Cataclysm. Her new joyful attitude creates an opportunity that Gry doesn’t want to miss. 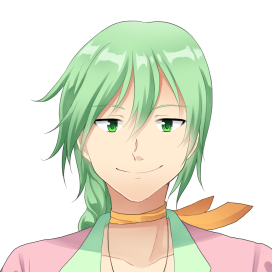 Elraz Fippio
The great of hero of light and eccentric rival to Gry. Will fight evil wherever he sees it. He matches our protagonist almost perfectly in terms of both stupidity and ego. 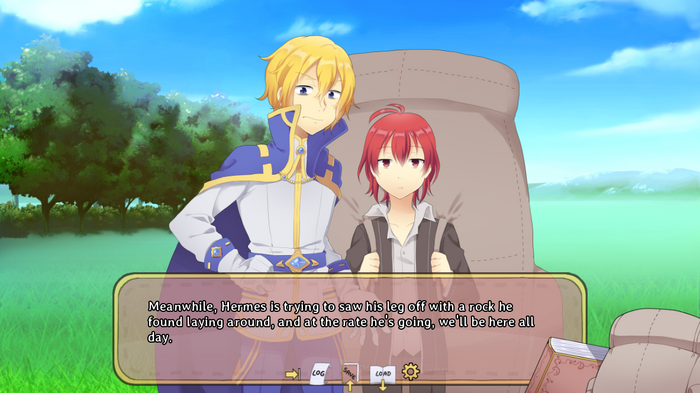 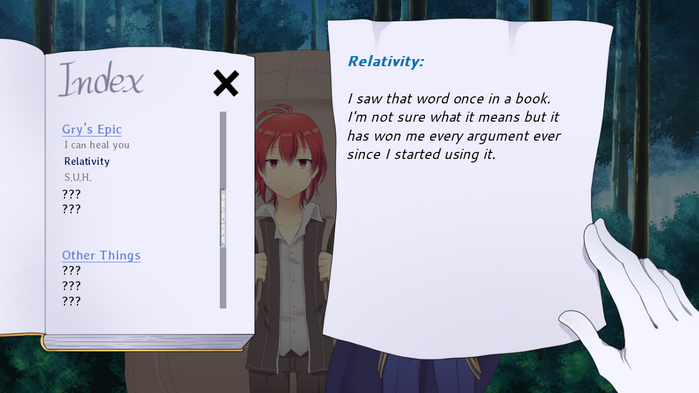 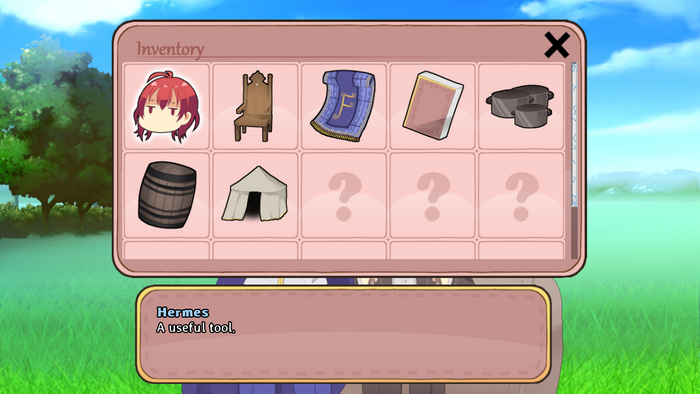 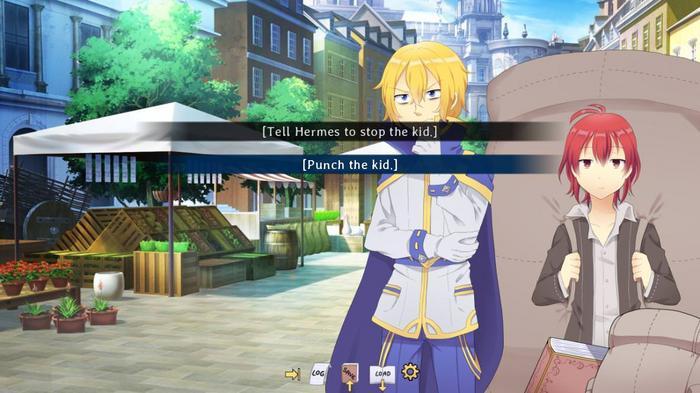 Other than experiencing the visual novel style storytelling, you also get to explore your surroundings by speaking to townspeople and searching for items to help you come up with up to three different evil plans (leading to three different endings) to achieve your goal.

The game has around 47,000 words, for about an hour of playtime (Or more, depending on speed).

There is also a fourth TRUE ENDING. You can get it by:
Getting every possible index entries and items and then going for the third plan.

We would love to hear from you! What ending did you prefer?
Was there any scene that made you laugh? Do you want to see more of these characters in the future?
Who would you like to know more about? What did you enjoy the most?
The more we know, the more we can better ourselves!


~Thank you for playing our game!~

Sorry for not commenting on this thread before! In fact, I enjoyed so much of this game that even my 14 years old son played it!

He got all the endings, I only went for the true ending as I usually do.

I found Gry hilarious and really interesting as the main character, especially since he's the narrator and we get to know the post-Cataclysm world through his eyes. His lack of morals and his opinions are really funny, and also did I get it right?:
Is he even unaware of Hermes' gender?? and hence, misleading us the whole time?
The art is also pretty good, both the cute, expressive sprites and the amazing backgrounds.

So, all in all, yes, I fully recommend this game and can't wait to see more adventures for Gry's team!
Do you like BL games? Then join Ertal Games' Discord!
https://discord.gg/ZUFsg9v
Top

Still not so sure what to think 'bout it. I mean, yeah, the game itself [part before the endings] was fairly good, no doubt 'bout it. I enjoyed it, after all Gry's a great character and his cluelessness towards
Hermes' gender
[but maybe I'm wrong? Maybe the town folks were deceiving us the whole time?] just suits him perfectly.
At first... after some thought probably most of the time presented humour was convincing. Why not - no matter how you look at this it's stil our beloved ol' dark comedy. But especially in the true end something was amiss. It just - how to put it - feel a bit strange? Like that's only some crappy good end and it couldn't've really worked or so. Maybe I just like more the bloody ones? Who knows, that's irrelevant.

I've to say music, the a-very-little-bit-spooky-one, and art was good. That's for sure.
What else can I say... Perhaps the most interesting part [to know about in the future chapters] is the universe itself but Gry' and Hermes' story [especially something about swapping roles and pretending to be a slave...] also causes curiosity. It has potential to be great [or greater than it's now].
My english is pretty horrible c: Honest Critique
Top

Sorry for the late replies! And thank you so much for giving our game a chance!
We’ve updated the itchio page with a Mac Version that hopefully works [I don’t have a Mac Computer to test it myself unfortunately].

To Ertal77:
I’m so happy you enjoyed my game! I hope your son wasn’t too disturbed by the darker endings and their music, I wasn’t sure if I needed to put some kind of warning since the horror is more atmospheric than anything gross.
I’m glad Gry, for as much as a dick he may be, could still come through as an enjoyable character!
As for:
Yes, Gry seems convinced that Hermes is a man, while everyone else can clearly see her as a girl. If that is true or not is an entirely different matter and is kept a mystery on purpose. But whatever Hermes is, it should be clear that he/she doesn’t really like being a man in Gry’s eyes.
I’m very happy that you were pleased with the game! I fully intend to make the next one better in every way! I have learned a lot with this first game of mine.

To Awiola:
I’m happy that the strange kind of humour of the game could reach you and I’m glad the overall experience was a positive.
I’m very sorry if the true ending left you with a bad taste. We tried doing an ending that would tie every loose end together in a nice way and make way for a nice follow up for a next game with the group. But hey: that’s why alternated endings exists, to be enjoyed instead!
We all knew we needed to have one ending where Elraz dies for everyone’s satisfaction.
We intend to build upon the world, the mysteries of what links Gry and Hermes together and have a more interesting investigation phase and complex plans to elaborate.
Upon many requests, though this game was pretty foolproofed, we will add a few “Bad Endings” along the way to punish stupid decision with a funny abrupt ending. Maybe it would make these kind of happy-end true endings feel more rewarding in this way~


Thank you everyone for your input! This is the reason we do these games for free, to hear from people who have enjoyed it.
We can’t wait to bring you more good things in the future.
Top

I know I'm kind of late on this one, but I finally got around to playing it after downloading it a month or two ago. I enjoyed it a lot! The humor was spot on, the plot always kept twisting and turning, and the mechanics worked very well with the game. Highly recommended, and looking forward to future installments!
Feel free to call me Iron!

Interested in editing or proofreading services? I do both, for free or trade!
Top

I'm a little stuck in gameplay. Do you have to choose a "master plan"?
Top

Nevermind. Guess you do have to choose one to complete the story.