Finished games are posted here, once they've been tested and are ready for wide release.
Post Reply
8 posts • Page 1 of 1
Message
Author

Wolfscade and I (Bob) have finished and released our game for Nanoreno 2019!

Charles 2.0 is a bit of a departure from my usual romance/dating fare. Play as the President of the United States... except you have no memory of who you are. Talk to the press and interact with your spouse and assistant without arousing suspicion. Can you successfully pass as the President for a day?

The game is free to download at https://wolfscade.itch.io/charles20 and features approximately 12,000 words, 6 endings, and 2 CGs.

(It also features man-on-man sex and an optional patch to remove the censoring, if that's your thing.)

Here's some screenshots. We'd love to hear what you think, if you check it out. 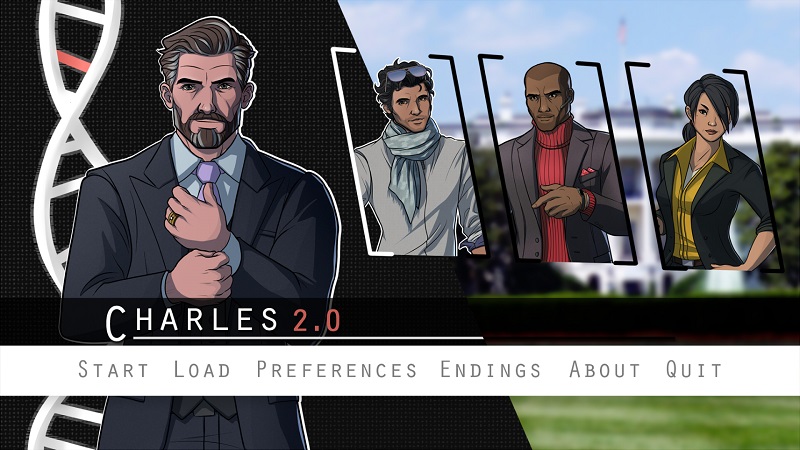 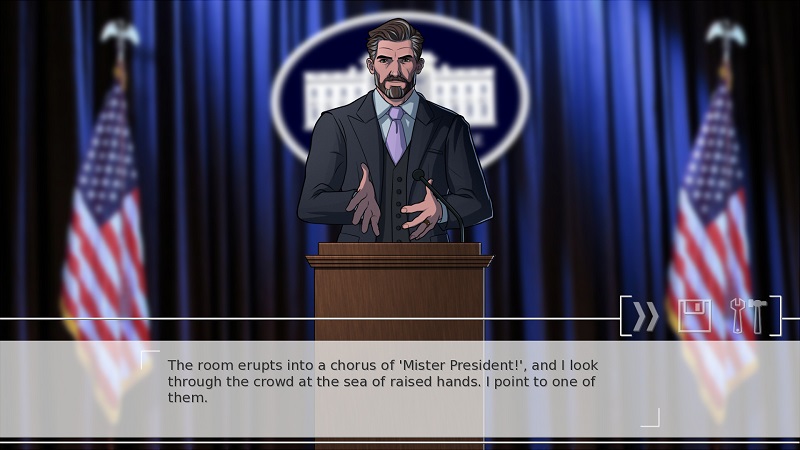 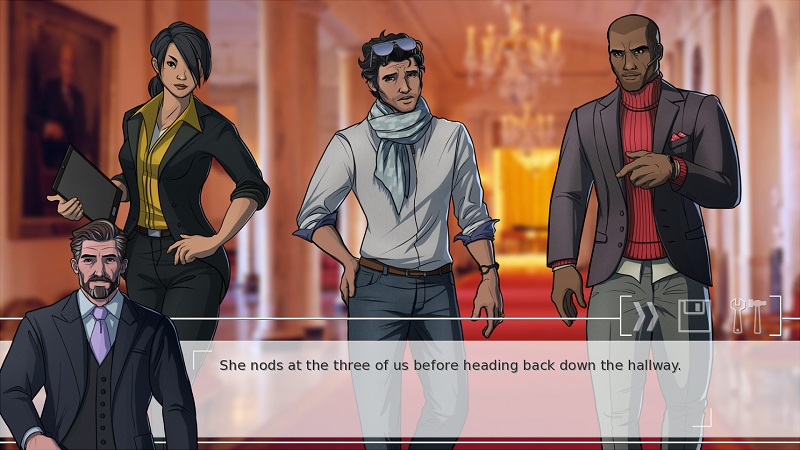 Love the concept of this game so much! <3 It's like nothing I've ever played before. I love the blend of political intrigue and the utter confusion of being thrown into a situation you're gobsmackingly ill-equipped for. It feels like a nightmare come to life!

The character art is gorgeous -- all the guys look so good! And even the agent looks badass! I've played Yearning before this and I wasn't able to tell you how much I appreciated it. Its earnestness and diversity and wholesome exploration of sexuality and coming out. All those A+++ qualities can also be found in this game. You've won a pan fan in me! <3 (I mean I'm pansexual. LOL.)

I'm having a hard time getting the second and last endings, as well as the last CG. I've replayed quite a few times, but what can I say, I don't have the talent to be a convincing politician, I guess. OTL Maybe I'll just wait for a Let's Play or walkthrough.

To sum it up, stellar job to this team! <3 Writing, art, UI, polish -- I have no issues with anything whatsoever, and I'm excited to see your future games! Thanks for sharing this wonderful game with us.
Completed Games: Flights of Fancy (NaNoRenO 2019)
Top

ilyilaice wrote: ↑
Wed Apr 10, 2019 11:24 pm
I'm having a hard time getting the second and last endings, as well as the last CG. I've replayed quite a few times, but what can I say, I don't have the talent to be a convincing politician, I guess. OTL Maybe I'll just wait for a Let's Play or walkthrough.

Thanks for the comments! I'm glad you enjoyed it.

At the questioning section at the beginning, ask a bunch of questions about the attack itself, and remember that new questions may appear once you've asked others. That should give you enough information for the press conference, remembering that Charles is unusually transparent for a politician. Then with Lorenzo, remember that he carries his blunt attitude over to his personal relationships as well, and that Lorenzo appreciates that of him.

I've been meaning to write up a full walkthrough... maybe I'll make a devlog for that today.

ilyilaice wrote: ↑
Wed Apr 10, 2019 11:24 pm
I'm having a hard time getting the second and last endings, as well as the last CG. I've replayed quite a few times, but what can I say, I don't have the talent to be a convincing politician, I guess. OTL Maybe I'll just wait for a Let's Play or walkthrough.

Thank you so much for linking the walkthrough! I was finally able to achieve all the endings. That last CG is just *____* (in other words, my eyes sparkled with unbridled happiness). The best ending is truly perfect.

Also, I understand now why I struggled so badly to achieve all the endings. I'm too much of a "yes man" when it comes to picking answers -- always trying to pick whatever sounds the sweetest, most patient, and most sensitive. I've played way too many dating sims in which those answers led to the true endings. In this case, I neglected to consider the actual personality of Charles. It's definitely refreshing to see an honest and blunt main character get the happiest ending possible.

Once again, I love this game. Kudos to the team for releasing such an amazing VN!

Screenshot looks nice and the premise is interesting. Will not hurt to check it out
Ongoing project :

I played this game back in April, and I didn't have time to comment because I was having enough trouble as it was balancing my schoolwork with playing all of the other cool NaNo VNs, but let me tell you that this game was definitely within, like, my top 3 NaNo games for 2019, and pretty high up on the list for my favorite VNs of all time. This may be a bit disorganized but here's a general list of the things I liked:

-The game was stunning visually - I loved the art style, the character portraits and backgrounds complemented one another nicely, the GUI was super sleek and fit the theme of the game, and I didn't see the CGs but if the sprites were anything to go by I'm sure they were gorgeous.

-The different opportunities to get information at the beginning of the game. The section at the very beginning was really cool because you kind of had to strategize to get all of the information in order to get the best ending, and it took some experimenting and familiarizing myself with the questions before I was able to do that, which I really liked. In "traditional" video games, a big part of them is improving your skill at the game itself in order to do better at it. With VNs there is of course some skill when it comes to picking the choices that will get you your preferred ending, but after playing so many it's usually not super difficult for me to do this any more (depending on the game, of course) and it's less of a "skill" thing and more just reading a story. Which is fine, of course, and I wouldn't be here if I didn't enjoy reading stories, but with this VN I really felt like it was the perfect blend of both of these things - asking the right questions, and then using that information to respond correctly to the reporters and to my husband, which makes up the "skills" I needed, as well as the payoff of a super engaging story to correspond with those choices. And teeny side note - I liked that there were more opportunities to learn about my personal life when examining my things if I didn't do that during the initial Q-and-A session. It was a really cool way of making sure that the information wasn't all packed into the beginning segment, and it made it less stressful to balance learning the professional and personal aspects of Charles's life.

-All of the endings were great (and it was super satisfying to get all 6 of them)! The really terrible endings were just plain funny, and the 6th/best ending was satisfying to get, since it took a lot of work (as mentioned above) and really turned out great for the main character. Although, I think my favorite was actually the first ending that I got, which was the fifth ending:
When I first started the game and was looking through all of the possible questions that I could ask, I was immediately drawn to the questions about the ethical nature of the cloning program, so I asked questions pertaining to that. As I did so, I got an idea of who I was playing "Charles 2.0" to be: a clone who isn't all too pleased about the situation he's been thrust into, but, having some of the original Charles's sense of duty, he reluctantly does his best. This was reflected with the way that the press conference went - well enough not to arouse too much suspicion, but I wasn't earning myself any threesomes - and with the way my conversation with Lorenzo went - Charles 2.0 did his best to act as Lorenzo's husband would, but felt guilty about essentially lying about who he was to a man who trusted him (I did actually tell Lorenzo at the end that I was a clone, but because I had done well enough beforehand, he brushed it off as a worrying side effect of the accident). It was a pleasant surprise (and really well-written, too) when Charles himself stepped out to thank me for my services and talk to me about my own feelings as a clone produced by his program, and his promise to shut the program down was legitimately moving and meaningful. Although I enjoyed all of the endings very much, this one was the one that impacted me the most because I felt like it came the closest to portraying every angle of an incredibly complex situation.
-I also just really liked the raw power that I personally felt when I got to tell a homophobic reporter off. Usually, I don't really identify with the main character regardless of who they are, and in this particular case I am almost nothing like Charles. But when I absolutely came for that man's life, I wasn't just happy for the character, I felt proud of myself. I think this was partly because of what I mentioned earlier about the skill required to even have the opportunity to do so, since you only get that option if you've done really well in the press conference; still, it felt awesome to put the guy thoroughly in his place and I can only hope that I have the opportunity to do the same thing in real life, so thanks for that moment. (:

This ended up a lot longer than I thought it would, but yeah, suffice it to say I really, really enjoyed this game a lot, thank you so much for making it!
hey hey I made a thing
Top

Thank you for the detailed writeup!

Yeah, this was intended to be a very different kind of game from my usual thing, with a bit of strategy in terms of questions and answers that you only start to understand after a time or so through. So I'm glad you found that part interesting and rewarding.

The fifth ending is my favorite one too, actually. I like it more than the "best" ending.

So happy you enjoyed it.