DOWNLOAD AND PLAY ON ITCH.IO
ALSO AVAILABLE ON GAMEJOLT

SUMMARY
You find yourself in a bed at your school’s infirmary. You remember nothing about yourself except your name and… that’s pretty much it. On top of that, it’s Valentine’s Day, you’ve got an unlabeled box of chocolates sitting in your bag, and a few of your “friends” are here to see you. What in the world happened? Who are you? Who are these guys? And more importantly… Who are these chocolates for?!


ABOUT
Froot Basket Valentine takes place in a sort of progressive Japanese high school. I tried my very best to write the protagonist without using any gender-specific pronouns to test my writing skills. I hope it gives you warm, fuzzy, shoujo manga feelings~! Just don’t get too comfortable with that vibe… All is not as it seems... 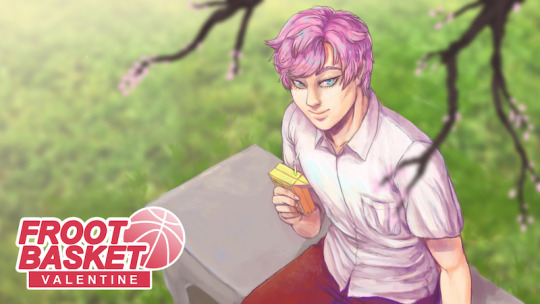 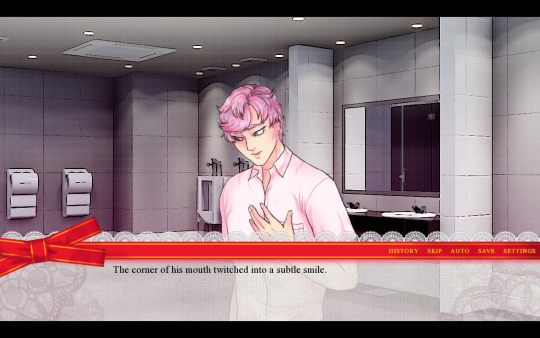 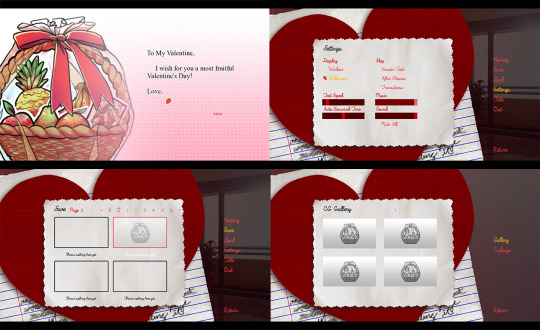 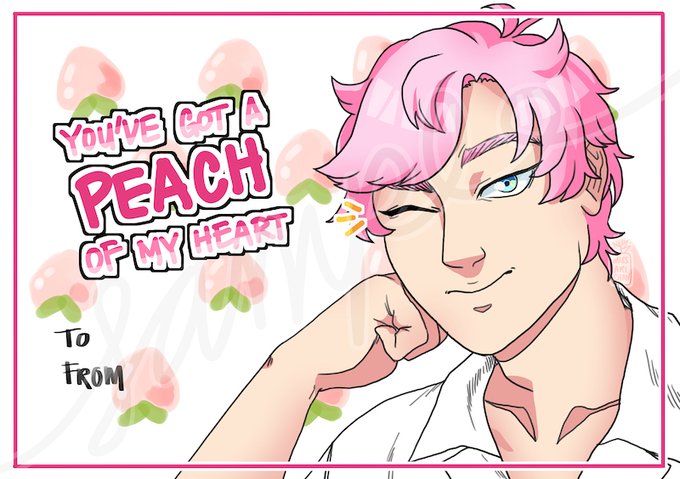 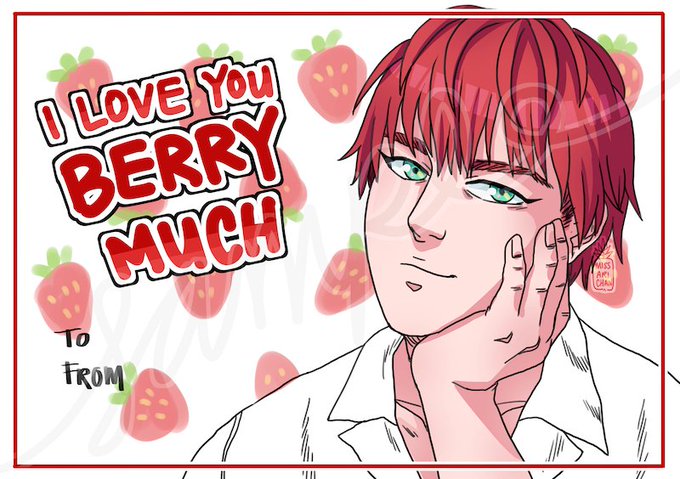 When selecting Oh-senpai's bad ending from the ending menu, errors pop up a couple of lines into it and ignoring or rollback just results in new errors.
Top

trepiechick wrote: ↑
Sat Apr 20, 2019 8:17 pm
When selecting Oh-senpai's bad ending from the ending menu, errors pop up a couple of lines into it and ignoring or rollback just results in new errors.

@trepiechick,
Thank you for bringing this to my attention! I think I know what the problem is as I get some errors when I try it too. I'll upload a bug fix after Easter. C:
Have a wonderful day! Cx
Tumblr | Twitter | Itch.io

Ollo~ Just here to update the first post with these bad boys... C;

hey there, i gave your game a playthrough tonight and thought i'd leave you some feedback!

1. Who’s your favorite character and why?
to be honest, i really loved ringo-sensei + spine! i first went down ringo-sensei's route
and he was so wholesome in the way that he was fascinated with your situation and in trying to solve your problem. plus the cg reveal in finally being able to see his face made my heart stop a little bit, ahaha.
spine was a fun character to get to know too,
it was cute also witnessing her romance with the school doctor!
2. Who’s your least favorite character and why?
i think sutoro, but i think that's just my personal preference in not really being interested in colder/quieter characters
3. What’d you think of the protagonist?
no thoughts in particular, i feel like they were relatively self-insert but i think that makes sense given the gender-neutral name + first-person view CGs
4. What did you like about the game? What did you dislike about it?
i really liked the sprite art and the CG reveals in the good endings! i also enjoyed the humor at certain parts
e.g. calling renji "oppa" was hilarious when i saw his orange head redden hahaha, and the protagonist not knowing if she was peeing when she became fearful after entering the bathroom. i also thoroughly enjoyed the various puns
in terms of improvement, i think at some point i was just going through different permutations of each choice just to figure out good endings for each character - some of the choices felt meaningless and i wasn't sure what the correct choice was supposed to be for those specific characters (specifically in the choice menu where sutoro asks you if you know his name)
5. What would you have liked to see in this story?
i would have liked to see the mystery/horror aspect of this story more fleshed out -
i think it was interesting that you hinted at momotarou's shared interest of occult/horror with the protagonist and how he was kind of creepy, so i was expecting a kind of climax during that confrontation in the bathroom. however, it felt kind of anticlimactic and i ended up with more questions than answers from that encounter + the subsequent ending, so i think the mystery fell short for me. i also wish the routes for each character were a little longer to kind of flesh out each person's backstory + relationship with the protagonist (perhaps it would have been cool to feature small flashbacks of memory with each character after their face was revealed) but otherwise i thought the good endings were really sweet/fluffy!
6. Would you, perhaps, like to see more of these characters in merch or other content? If so, what would you like?
it'd be cool to see another game featuring these characters! or comics or whatever you're interested in : )
7. Any other feedback, questions, comments, or concerns?
love your art style and the UI you designed for this game!! i'd love to see future games from you
Top

OH M! Thanks so much for taking the time to leave feedback and for also playing my silly game! Cx

I'm so glad you liked Ringo-sensei and Spine! I was a bit worried about how people would feel about their characters... But I'm happy you enjoyed it!
I love puns a lot, so this game was really fun to write! LMAO, the first parts of Renji's route were some of my fave lines.

Thank you for this! I'm trying to figure out how to write choices that are more meaningful to the story. Sometimes I find it difficult to determine where in the story the player would feel the most compelled to make a choice to change the MC's fate. I admit that for this game, the choices are pretty bland, and without a walkthrough, it might be frustrating to figure out what choices get you a good end. In the future, I think it'd be good to give more character cues so the player would have a better idea of which choice a love interest would prefer. I'm also trying to figure out a way to advance through a route without using a "points" system... Each choice in this game carries a different number of relationship points, and, to be honest, I wish I hadn't written it to be that way. But trial and error is a good way to learn! Thanks again for this feedback!


i would have liked to see the mystery/horror aspect of this story more fleshed out...
i also wish the routes for each character were a little longer to kind of flesh out each person's backstory... it would have been cool to feature small flashbacks of memory with each character

Ah yes! I actually wrote Sutoro's route first, and it was all fluffy and wholesome. And he was supposed to set the tone for the entire game. I had meant for it to just be lovey-dovey, romance-y stuff. But then I thought that'd be boring, and I kept thinking about the things Sutoro said in his route. And I thought, "But actually, why would he say that thing?
Why tell MC a ghost story?
" And thus, Momo was born. And...
I meant to keep your meeting with him quite brief so you're left with more questions than answers... And I thought it'd just be fun to think up theories in your head or something... But a lot of people seem pretty interested in knowing exactly what's going on or what happened, and many have expressed a wish to have more time with each character or have longer routes. So... I'm planning a companion game (or two) that will hopefully clear things up and be more satisfying than this little experiment.

Also, I really like your idea about the flashback thing! That would have been really fun! But knowing me, I'd have definitely wanted to draw CGs for those moments and... drawing CGs takes so long.. . . Nah, I would've totally done it if I thought of it. I'm kicking myself now. That would've been so good and so rewarding as a player !!! I'll do my best to make the pre/sequel(s) super good!

love your art style and the UI you designed for this game!! i'd love to see future games from you

Thanks so much! I'm a hobby artist and I draw a lot of character art, but graphic design is also pretty interesting... :'D If you wanna see more of that sort of stuff, I linked my twitter and instagram in my signature. Also, I'm currently working on a HUGE project right now: After-Party Chemistry. It's a visual novel/otome game with dating sim elements. An extended demo is out if you wanna check that out too!

Again, thanks so much for your feedback! I really appreciate it! I'll definitely keep this in mind for the future!

EDIT: i said i linked my instagram... but.. it's not there... sorry! here it is: https://www.instagram.com/xmacxart/
Tumblr | Twitter | Itch.io

Hello~ Just an update to say that I made Valentine cards for all the characters in Froot Basket Valentine! Both Momo and Sutoro's ones are free for download, but if you'd like to support me, you can get the whole set for 3 USD or more!

I've also got a favorite character poll going until February 14! I'll draw a special illustration for the character with the most votes, and I'll release it on my social media on Feb 29!

PLEASE CLICK HERE TO VOTE!
EDIT 2/14/20: POLL IS CLOSED! THANK YOU TO EVERYONE THAT VOTED!

I hope you all have a Happy February~
Tumblr | Twitter | Itch.io