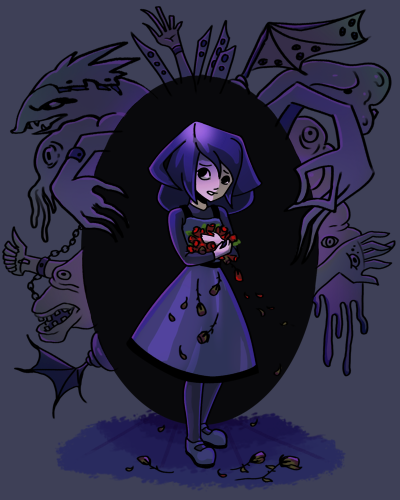 Beyond the gaze of the residents of Memora City there has always been a threat of darkness. And now that threat shall be fulfilled. Monsters, madness and disease have infiltrated and it appears that the end is coming.

A private investigator being chased by something horrible, a group of guardians who must finally step into the light, and a runaway girl...

Whose story shall you follow and what shall that mean for the fate of this city? 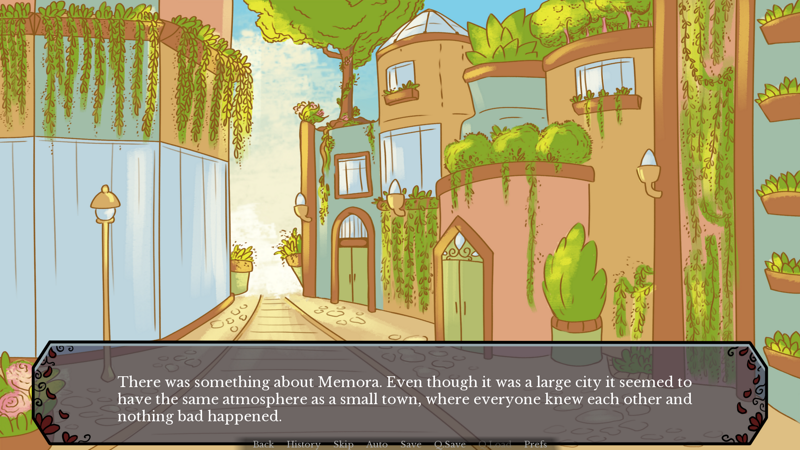 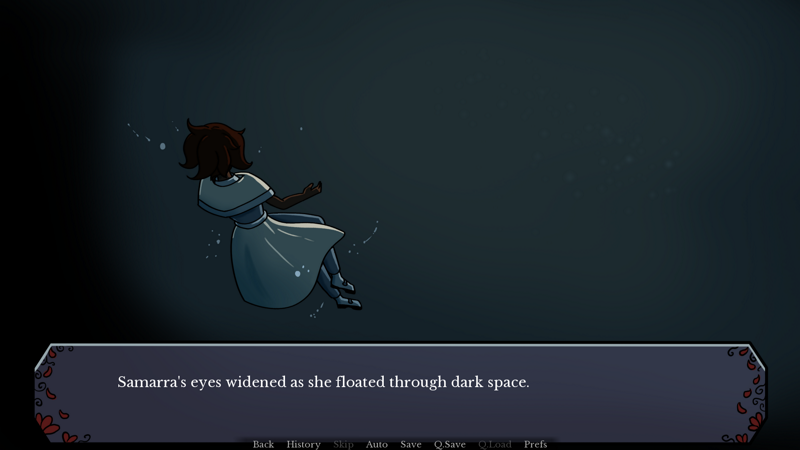 This is my NaNoRenO 2020 entry! It takes approximately 50 minutes per play through and 3 hours to get through the whole game.

Congrats on the release! ^_^ Will be playing this as soon as I can.
hey hey I made a thing
Top

Thank you! I hope you'll enjoy your time in Memora. ^^
Top

So it took me like a month lmao but I finally played it! I actually started playing it a week ago, but I've been having to play it in between working on final projects, so it took me quite a while to finish. It was really nice to be able to play this VN to relax between working. ^_^

So actually, the first thing that really struck me was the textbox! So much so that I actually texted my fiancee about it lmao. I'm sure she had no idea what I was going on about. But I just thought that the textbox was such a perfect balance between the beautiful and brightly-colored backgrounds of Memora and the darker, more horror-oriented ones. The light gray color and the red flowers were a perfect bridge between the light and dark sides of this story.

The chase scene with the monster legitimately unsettled me. The monster was terrifying to look at, and being chased has always been a fear/nightmare of mine, so that entire sequence was super effective.

The first ending I got was the one where Jared, Adrianne, and Eislyn all travel together, the second was the one where some people manage to escape, the third was the one where Samarra kills Warin, and the fourth was the one where Adrianne gives in to Naughtmire's influence. And then, of course, the unlockable fifth ending. There probably wasn't a specific order that I had to play them in but I found that it was a really great experience of the story when playing them in that order.

I absolutely LOVED Jared. Like. What a great guy, what a great dad. I think I felt for him the most because he was sort of the "normal" guy who didn't know what was going on but was just trying his best to help people. I loved Adrianne, Eislyn, and Samarra too, but Jared was the one that I rooted for the most since he got caught up in everything so suddenly. Also, the relationship between him and the girls was so sweet, especially that scene in the fifth ending where he protects them. AND HIM ADOPTING ADRIANNE??? I could already feel the Dad Energy in his interactions with Adrianne but the confirmation that he does adopt her in the final end was so so good. That might have been the happiest part of the ending, honestly.

Also, in general I really liked your horror aspects - they were legitimately scary but to a degree that I could handle. I wasn't so scared that I didn't want to play. Instead, I was able to embrace the feeling of horror and appreciate the work that you did to make the monsters unsettling and scary. I think the BEST scary part was Warin's corruption in the ending where Samarra kills him. The imagery was suitably terrifying, and it was also the scene that helped me nail down one of the big themes of this VN. Anyone can do good, and anyone can do evil; in fact, evil is often good intentions brought to a severe extreme. I thought the entire thing was just super brilliant. And I actually didn't like Warin at all in the first four endings, so I was really impressed that you managed to make me like him with his short amount of screen time in the firth ending. ^_^
I don't even think I mentioned all of the great things that I noticed in this VN. I just.... I really enjoyed it so much. I've been trying to play all of the NaNo VNs that I was interested in. Yours, of course, was high up on my anticipated list, but I ended up playing a lot of the shorter ones first because it was easier to play a short VN in between multiple small assignments. Once it got to the point where I was mostly working on long, final assignments, it was much easier to spend time sitting with a longer VN like yours, and it was just... so perfect. Thank you. ^_^

I really wanna draw fanart of this,, but I'm not a very good artist and I'm not sure I'll have time between projects lmao. But I'll definitely post it here if I'm able to. ^_^
hey hey I made a thing
Top

Wow, thank you! I'm really happy you liked my game so much and it helped you relax!

Glad you liked the textbox! GUI and graphic design is something I struggle with but I had fun with it this year. I decided to take an element from both sides of the story (metal and red flowers) and combine them. I'm glad it came across and worked out so well! ^^


Thanks for letting me know the order of endings you went through! I've been very curious about which routes players pick first. ^^
And I agree, the path you chose made a nice progression in the story! Someone did a Let's Play of Eislyn's Apocalypse and they also did the 'Father' ending last, which I think is a good way to finish off. ^^

Awesome, I'm glad you loved Jared and were rooting for him!

When the idea for Eislyn's Apocalypse sparked in my head Adrianne and Jared's relationship was one of the driving forces for me to pick this as my NaNoRenO project this year. The concept of this innocent 'villain' and an innocent bystander trying to help her amidst the chaos of a war between good and evil was really interesting to me. He's definitely a good guy, looking past the scary connection she has with the forces of darkness and seeing a child who needs his help! ^^ And as we've seen, Adrianne would have lost all hope without him.
To me, they were always meant to be a family. I always felt like Eislyn (the human one) was like a sister to Adrianne, even though they didn't know each other that well before the chaos started. ^^ And I'm sure Adrianne will have a much happier life with Jared, Rosa and Eislyn! ^^

I'm happy the horror didn't scare you away and you were able to enjoy the thematic elements of this story! ^^ Yep, this all started as a fantasy story about the roles of good and evil. That accidentally turned into a horror game, haha. XD
Drawing the monsters was really fun. It was nice to be able to let loose and make up crazy designs. I had a lot of fun working on this visual novel, actually. Makes me wonder if I'd enjoy making more horror games. ^^

Warin was the biggest victim of the scene cuts I had to make, unfortunately. ^^ His change from good to distant to "evil" was supposed to be a lot slower, more subtle. I feel like I failed him somewhat, and I think if I had written that route better his madness/death scene could have been just as heartbreaking as Adrianne's. ^^
We didn't get much chance to see his good side, but he certainly has one! ^^

Ah, I think it's amazing you want to draw fanart!

Even if you don't make any the idea that my game inspired you to make some is incredible, thank you so much! ^^

And thank you very much for playing my visual novel! And leaving such a nice comment! ^^
Top
Post Reply
5 posts • Page 1 of 1