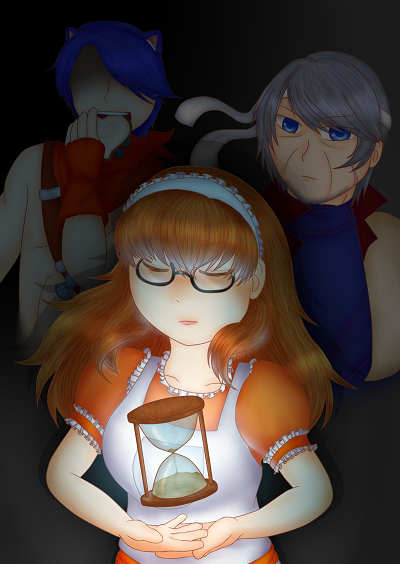 Meet Historia, a rekishi otaku who works as a caregiver at an elderly boarding house. She's absolutely IN LOVE with history and fangirls over the heroes of old. It is an impossible dream... but she'd really like to meet them someday... little does she realize that perhaps these long forgotten, beloved heroes may be closer than she thinks...

* This game is free, any mentions of "purchasing" is done as a joke in spirit of the jam for the badness factor.

Our heroine, a lover of history, especially the time period The Last Mystical era. She works as a maid at an elderly boarding house where she won't stop pestering her boss about how awesome history is.

Historia's boss at the elderly boarding house. She just wants Historia to do her job and to shut up about The Last Mystical Era.

A recent resident at the elderly boarding house. He always seems a bit melancholy. Historia loves to talk to him the most.

Paprika's great-grandma. She appears to be a little crazy, attacking threats that aren't there... or are they?

The oldest of the residents, a fun but slightly quirky gentleman. He is currently working on a special formula. Seems to have a thing for Vivian.

A mysterious cloaked figure who's intention are unknown.

DEV NOTES
I released the full version of this game on the last day of 2020, but had to fix some errors on New Year's, so the 2.0 version was uploaded then. This was originally submitted to "So Bad, It's Good!" Jam 2020 as a demo. The jam's modifier was "Impossible" so I interpreted it in a story sense. The original SBIG EDITION is still up for download (for Windows only) which contained a lot of DLC jokes lol. We were running out of time and I wanted to submit something, so that is how I went about it, but now the full version has everything, and all but 1 DLC joke removed. I guess the original demo kinda falls under the "Impossible" modifier too with "cannot advance without buying the super deluxe edition ye" lol. The game is story-driven, like all my other RPGs, with voice acted cutscenes and my usual brand of humor. As the jam is all about being so bad it's good, the story is purposely ridiculous. I'm quite proud of this one and hope you all enjoy it! Thanks to tashaj4de for the fabulous cover art and to El.Seth for the character portraits + allowing me to cameo her character "The Jester" from her visual novel The Punniest Pun Messter.
PROJECTS:
Operation: Magic Hero [WiP]
Piece By Piece [COMPLETE][Spooktober VN '20]
RE/COUNT RE:VERSE [COMPLETE][RPG]
Since When Did I Have a Combat Butler?! [COMPLETE][NaNoRenO2020+]
Crystal Captor: Memory Chronicle Finale [COMPLETE][RPG][#1 in So Bad It's Good jam '17]