I am creating a VN but the assets I am using are 3D. I know there is sort of a stigma with 3D and Renpy, that it's just another smut game with no substance. And truth be told, I haven't played a decent narrative driven 3D VN. That's is prolly the reason why I am creating my VN in the 1st place.

So what is the communities opinion on this? Is the stigma justified?
Top

I think regarding first impression about 3d vn, it depends on how you present your game. I mean, does yours have overly sexy character in the cover? If your vn is not about smut, then simply don't present it like it's a smut game. And people who take interest on your vn will most likely read the tag/category and summary before they decide to play your game or not. So I say just ignore the stereotype that 3d vn = smut game and do what you want to do.

Art-wise, the trickiest part of using 3d assets in vn in my opinion is that it's harder to show mood and character expression. Most of the time, the image from 3d program will have to be post-processed in photoshop or other image manipulation program because the raw image feels lifeless and I think that's one thing that keep people away from 3d vn. However, there is a senior member here (forgot the name, sorry!) that created some good looking non-smut 3d vn. I might update this post when I find it, but I'm sure you can find it on your own if you dig deeper in completed project category.

I'm not sure if this was the one morinoir was referring to or not, but SoUnd Is Toxic used 3D models and made them look pretty good in my opinion. You might want to check that one out.

Donmai is one of the lemmasoft member who makes VN using 3D art. He uses filtering techniques to make the art appear to be hand drawn.

Not gonna lie, the only VNs using 3D art so far that I saw were pretty much pure smut. I don't have anything against 3D art, in fact I look up to people who can make it look great. I'm sure with a good style and lots of effort put into making it look nice, such art can get you far.

But it really shows when the developer just saw it as a chance to save money and time.

For me, the problem with a lot of 3D art isn't that it is 3D art, but that 3D art is really hard to do well...and a lot of 3D art isn't done that well. It takes a lot work and time and effort to make 3D art to really sing. And some people use it because they think it is easier. But getting good results isn't easy.

And look, bad 2D art is also bad. But I find there to be a larger percentage of really good 2D art compared to really good 3D.

So my position is...I don't care if the game is smut or not smut. And I'm totally open to 3D art...it just has to be good 3D art. You make good 3D art? I'll check it out.
A Close Shave:
*Last Thing Done (Aug 17): Finished coding emotions and camera for 4/10 main labels.
*Currently Doing: Coding of emotions and camera for the labels--On 5/10
*First Next thing to do: Code in all CG and special animation stuff
*Next Next thing to do: Set up film animation
*Other Thing to Do: Do SFX and Score (maybe think about eye blinks?)

It's Donmai! Thanks for reminding me. I'm always bad at remembering name DX. But those Sound is Toxic is also one of very well made 3d vn I've ever seen. Thanks for the suggestion! Just look at this scene => 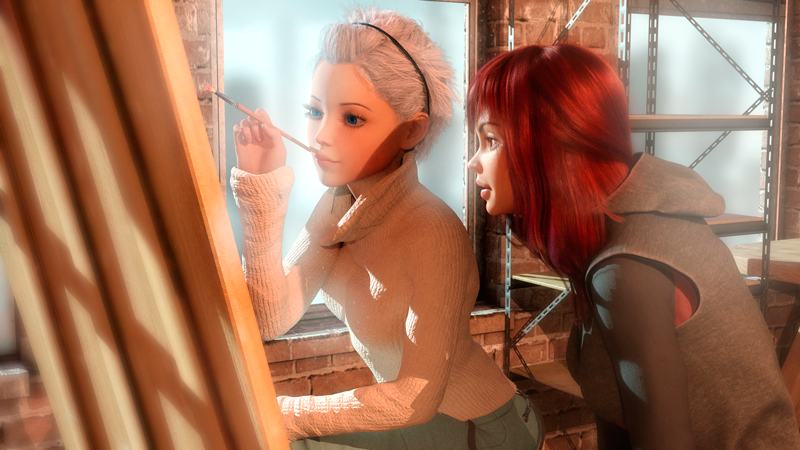 I don't know the process of creating 3d sprite, but I disagree when people said it's cheap. Better to save money on good 3d models than just-okay 2d art, no? Sure, it can look cheap if the creator just recycle the same model over and over again and not bother to do post-processing steps. But if you put more effort in customizing your 3d model and make sure an image is finish by adding effects and filters until you got something like those image I post above, people will surely want to play your game, be it smut or not.

Wow. Sound is Toxic looks phenomenal. I'm gonna try it. I may get a few inspirations from it.
Top

I created all the images for my VNs using DAZ Studio and the 3Delight renderer. Many DAZ Studio users prefer to use iRay these days. In fact, it's harder to create convincing images using a biased renderer like 3Delight but, for me, having to "paint with light" and manually adjust the surface properties and the shadows intensity is part of the fun. Postwork is also very important. Click the thumbnais to see the full image.

I have seen some people in this forum stating that they are somehow allergic to 3D generated images. Apparently, such images can make them feel sick or vomit on their keyboards. If you're one of those very sensitive people, I'm sorry.

Donmai, you are my favorite creator who uses DAZ for your VNs...you get some of the best images, and your framing and composition of the images are also really well done. I also I really like your writing. Whenever I see that there is a new work by you, I always check it out.
A Close Shave:
*Last Thing Done (Aug 17): Finished coding emotions and camera for 4/10 main labels.
*Currently Doing: Coding of emotions and camera for the labels--On 5/10
*First Next thing to do: Code in all CG and special animation stuff
*Next Next thing to do: Set up film animation
*Other Thing to Do: Do SFX and Score (maybe think about eye blinks?)

Thanks, trooper6. I need to make an effort to finish at least one of my many projects this year.

I'm a professional CG animator, so here is my take on this:

Many EVN developers have to work on a budget, so if 3D art is used, it will either have to be done by the developer (1 person), or they will hire 1 person to do the 3D art. This is very different from, say, a tv series production where there are many different steps to create 1 frame of animation: You need someone to build the 3D model, texture it, and a rig to it (so that you can pose the character), an animator to pose the character, someone to render the character, and someone to adjust the lighting and colours for the final image.

When I see the 3D EVNs that people tend to complain about, I'll immediately notice two things: 1) The render is very poor (natural lighting and colour keying has not been added to create an atmosphere), and 2) The 3D models are unedited stock models.

The problem with both these things is that is stops the artwork from standing out. Why makes your VN unique? What is the tone or impression you want to give?

But then I'll see games with VN aspects to it that stand out. Take Donut County for example:

The art style is low-poly, minimalist, and uses bright colours with lighting that looks like cel shading. The irony is that stock 3D models are often more realistic or detailed, but because they we're specifically made for your game, they won't fit with your story's tone, unless you write your story with those 3D assets in mind.

Another example of a 3D VN is the upcoming Necrobarista:

Look at the striking colours and lighting here. The game also uses an anime-influenced art style with the character models, which makes sense, since the game's plot and tone was also heavily-influenced by anime, according to the developers.

So basically, I would say that 3D art can absolutely work in a visual novel, SO LONG AS:
1) You are willing to put a lot of effort into the rendering, colouring, and lighting.
And 2) The background and character model designs fit with your story's tone.

Yes please! I enjoyed to play all your works and the images above look very promising too...

I generally just dont like 3d it feels a bit odd to me, however if it has a good story and the characters look interesting enough I would check it out
Top
Post Reply
14 posts • Page 1 of 1