Meet Me At Sea [otome][GxB][GxG][Mermaid]

by Hazel
I'm super into mermaids, so this is definitely relevant to my interests. The number of love interests seems very ambitious! That's impressive. I also like the sprites and admire your commitment to having a large, diverse, interesting cast. As a small note, though, I think it would be wise to include the text from the image header as pure text as well. I find that makes it much easier to read, especially considering the stylized font and background colors.

Hazel wrote:As a small note, though, I think it would be wise to include the text from the image header as pure text as well. I find that makes it much easier to read, especially considering the stylized font and background colors.

Yeahhh, I made the image while I had technical difficulties, and it was only after changing monitors that I realized the colors didn't mesh well. I'll be trying to fix it up soon u_u In the meantime I'll go and copy the text into the post.

Updates: Hopefully there will be more soon, though I'll note I've also started working on a smaller project that I hope to complete and release before MMAS. Stay tuned! 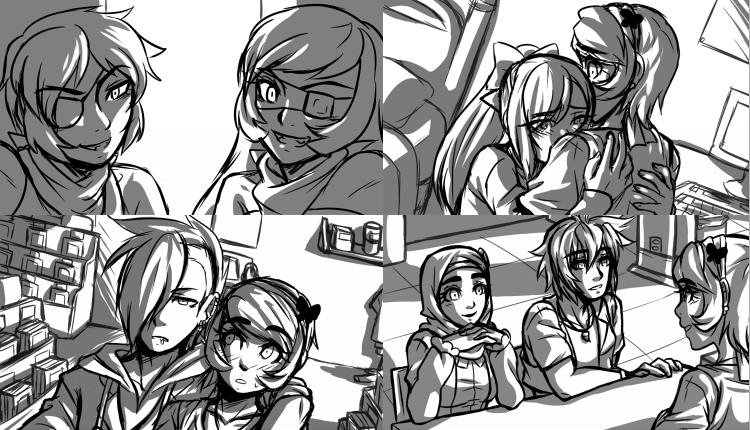 I started thumbnailing some CGs. I've done five so far, but I'm only showing four of them for now. The top two and the one not seen here each have another variation. They're mostly from the common route so there are no spoilers; the only exception is the image at the top right, which is from later on in the story, but is from a scene that is present in all routes anyway. 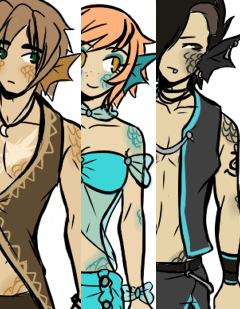 And drafting sprite poses... this one's gonna be tough OTL

Maneli's birthday is on the 29th, so I'll try to get a headstart on her illustration to avoid a repeat of last time OTL... I still have to do the March 1st birthday illustration :'D I also intend to sketch redesign illustrations for more of the characters soon, as well as art of the NPCs. I'd like to update the character cards in the original post soon as well.

I've also done some more brainstorming and plotting, but that's all locked up in my brain at the moment, so I don't really have anything concrete to show for it. Besides, that would probably spoil the surprise. Additionally, I'm slowly working on setting up a general dev blog on Tumblr and a matching Twitter account. Both are empty at the moment, so I'll hold off on sharing them for now. I'm still undecided on whether I should merge it with the existing MMAS blog or keep them separate...

by Evy
Not an update per se, but I'd like some input on something.

On Tumblr, I've had a sideblog for MMAS running for over a year already. I've recently grabbed a URL for a general VN dev blog, and it raised the question: Should I keep both blogs separate, or merge them? I mentioned this in the previous post already. The decision would mostly affect the organizational aspect of the blogs, and could go in either direction. I'm always super indecisive, so feedback would be appreciated, haha;;

Here's a StrawPoll I made for it! ... Aaaand I finished the boys' casual outfit redesigns! About time, geez. They gave me a lot of trouble.

I started on character cards for the OP. It'll take a little while longer before they're ready to be posted.

by Evy
Guess who finished it late again!! 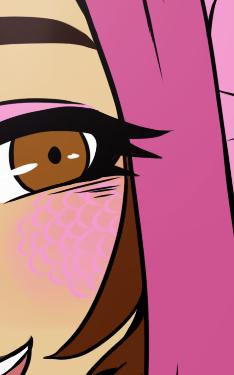 And guess who else is being drawn belatedly........ 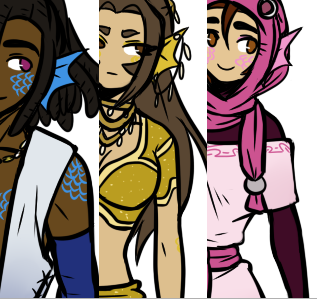 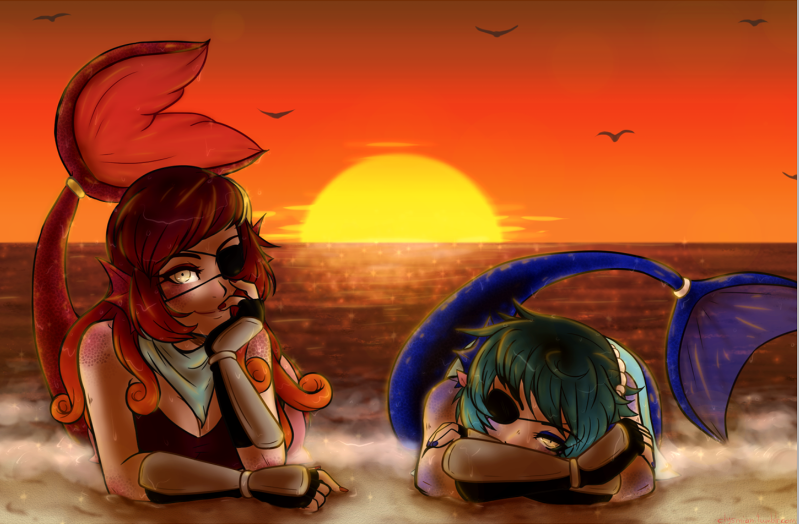 #MerMay featuring a pair of NPCs, Phoebe and Diana. 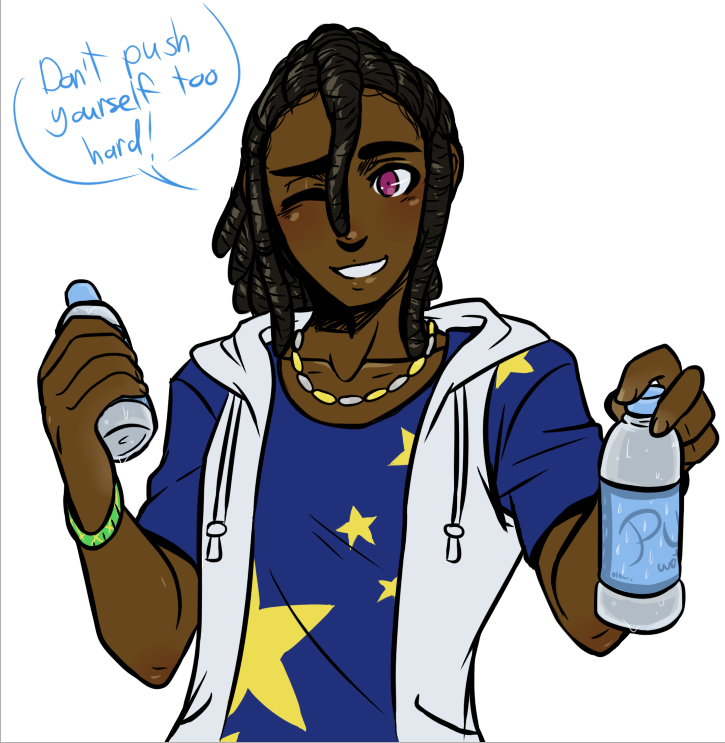 A few weeks ago I drew a supportive Joshua to motivate me to keep working... 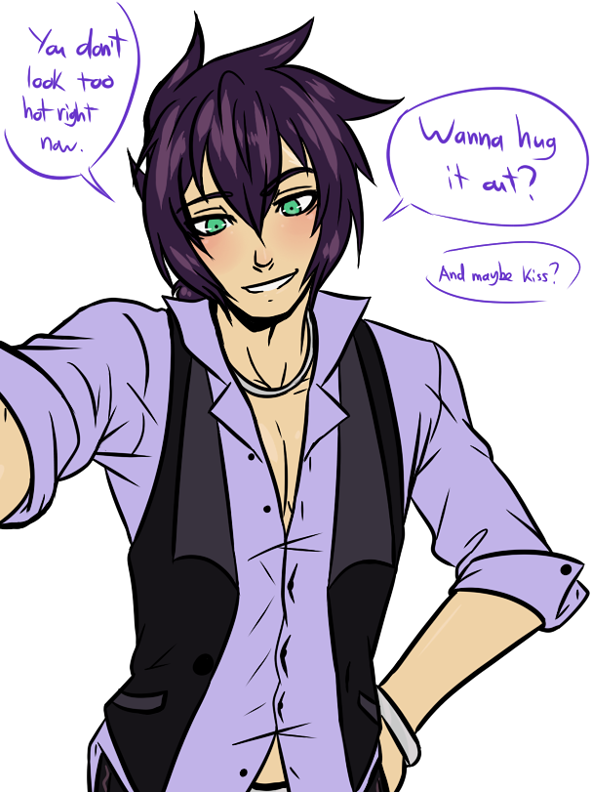 ... and Hugo decided to join in and make it weird.

As for actual progress: I was stuck on menu looping for a while but managed to figure it out the other day. The remaining introduction scenes waiting to be written are Zayleen, Leonidas and Jun's, and that should mark the halfway point of the common route... hopefully.

by kistnerelizabeth
I love this idea and really hope to see it become a game! I love mermaids and the ocean, so I would love to play this. I look forward to more updates. ^_^

Which character appeals to you the most so far?
Gabriel, Hugo, and Tristan all seem really cool, appearance-wise.

Whose route would you play first?
Tristan.

How do you feel about a protagonist that has their own identity rather than being a blank slate for self-insertion?
Sounds good to me. Either or is fine by me. As long as the game is awesome, the character can be blank or self insert and I would still enjoy it.

If you were a mermaid, what color would your scales be?

On one hand, I would want my favorite color scheme- Red, White, and Black
And, on the other hand, I love pretty colors and rainbows and such, so I would probably want scales like Rainbowfish (the fish in the kid's book).

by Evy
Wow, last update was May 30th. That's depressing.

I unfortunately have not been able to work a whole lot on this since then due to a combination of art block, writer's block and depression and FFXIV. I've only managed to start picking at things again last week or so. Jun's introduction scene is done, but after looking at the word count for each intro scene, I realize how much discrepancy there is, so I will need to revise some of them.

I also wrote a scene from Joshua's route since I had it floating around for a long time and figured it was best to put it on paper (or Google docs, as it were) before it escaped me.

The common route so far (including the unfinished Zayleen/Leonidas intro scene) is up to 10,756 words. Gabriel's route is at 1,471 words and Joshua's is sitting at 2,688 words, for a grand total of 14,915 words. Granted, this is all counting the character names like "MAGDALENA: (text)", so the number is slightly off. I don't have en estimate for how many words long each route will be, and I'm not sure I could make an estimate for play time either considering different people's reading speeds...

I've also slowly started tackling mermaid form redesigns again, and have drafts done for Hugo and Tristan. The ones left are Nanami, Zayleen and Leonidas. And... I'm several birthdays late for illustrations :')

That's pretty much it for now. I have to focus on All That Glitters first, but admittedly I'm a little stumped...

by Blue Mythic
So, in general, I'm loving the concept, it's really interesting, and you're the first I've seen with so many love interests! On top of that, you're working alone on this? Sheesh, that's a lot of work! I also love that the mermaids have different colored scales, I just thought I'd point that out haha.


Which character appeals to you the most so far? Whose route would you play first?

I'm definitely loving Joshua. Aside from blue being my favorite color, I just love cheery characters. Not to mention I wanna know why I can't go to his place ( ⚆ _ ⚆ )

How do you feel about a protagonist that has their own identity rather than being a blank slate for self-insertion?

Though I do enjoy blank slate characters sometimes, I don't mind her having her own identity! It's interesting that way, it helps lean more on the story side of visual novels.

If you were a mermaid, what color would your scales be?

I thought long and hard on this, and I have settled on gold!
All times are UTC-04:00
Page 2 of 2
Powered by phpBB® Forum Software © phpBB Limited
https://www.phpbb.com/