A place for game announcements, and for people to discuss games being made.
Forum rules
Please read the sticky before creating a new topic. Linking to Kickstarter/Crowdfunded games requires a demo. Updates to Patreon-backed games may be posted once every 2 months. Adult content should not be posted in this forum.
Post Reply
9 posts • Page 1 of 1
Message
Author


Story
Set in the far distant future, humanity has flung itself to the stars. You play Ava Winters (re-nameable main character), the captain of a motley crew of con men, thieves, and rebels trying to scrape by any means possible in a universe that has no place for outlaws. Lie, cheat, and steal your way through the universe, and maybe into the heart of your crew. 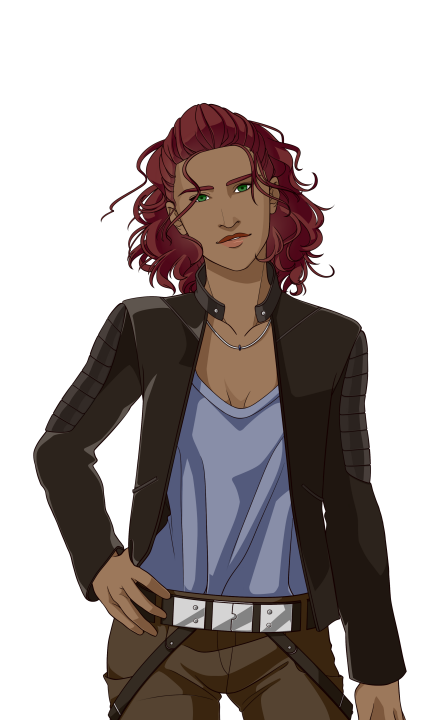 Ava Winters (re-nameable MC) - A former Dominion captain, you left the army after a run in with an Archon artifact left your entire unit dead. Now you captain a motley crew of outlaws, renegades, and vagabonds trying to scrape by a living in a universe increasingly hostile to the idea of outlaws. With the Dominion forces trying to force order in the universe, you try to steer your way through the chaos and hang on to the last wild frontiers. 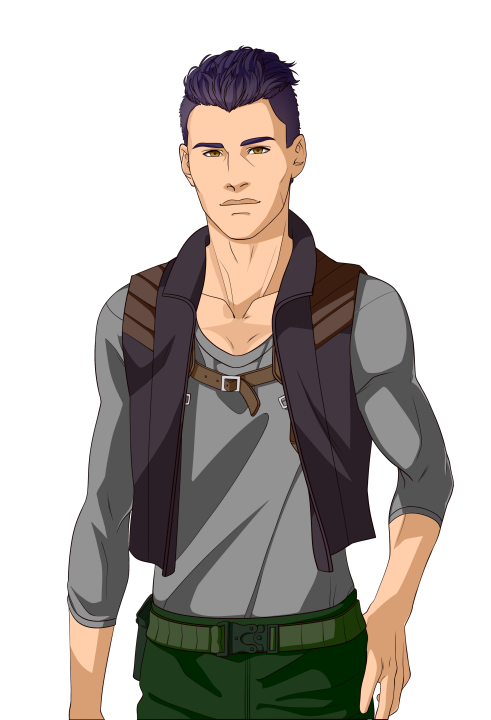 Rhett - The only other surviving member of your Dominion unit, Rhett has stood by your side for over a decade. Steadfast and calm, he’s the perfect second-in-command. A good soldier, a better friend, and despite his intimidating looks, a total marshmallow. He's had a crush on you for over a decade, but he's always been too shy to act on it. Maybe now's the time to finally give him the push he needs to take a risk or two. 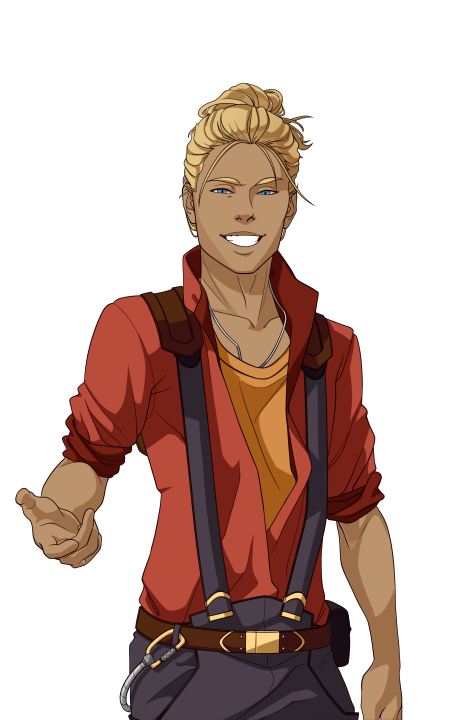 JD - A smart-mouthed playboy that propositions you at every turn. As a gifted mechanic, he’s a vital part of your crew, no matter how aggravating. JD rarely takes anything seriously, apart from upgrades to the ship. His easy wit and charming demeanor make you want to learn more, but it's hard to take his over-the-top flirting seriously and it feels like he's just messing with you. Unless, he actually means what he says? 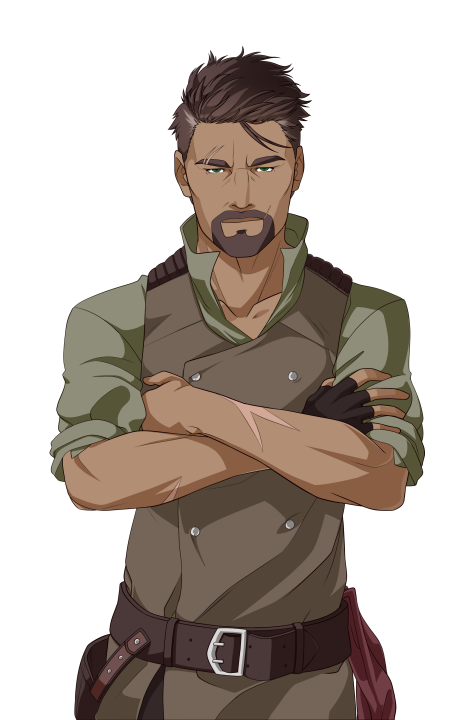 Morgan - The ship's chef is quite possibly the only capable crew member. Morgan can shoot, steal, hack, pilot, and do generally anything you need him to, but he chooses to cook. That doesn't stop the crew from treating him with more respect than they give you, though. He says he's retired, but no one has any idea what he actually retired from. And the more you try to find out, the more he tries to push you away. 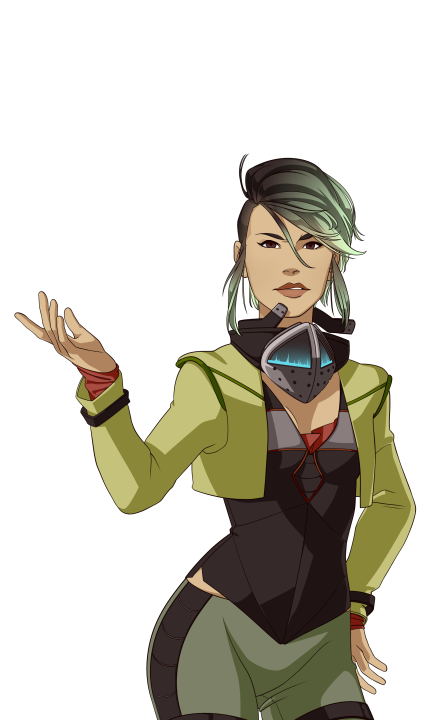 Lex - Never one to mince words, Lex is the best pilot in the universe and wants everyone to know it. Snubbed by both the Dominion forces and the Republic alliance, Lex has offered you her piloting skills, at a cost: she wants to take your spot. To her, being captain means having the best skills, and she's got that in spades. But maybe her 'rivalry' with you is really just her way of trying to get to know you better? 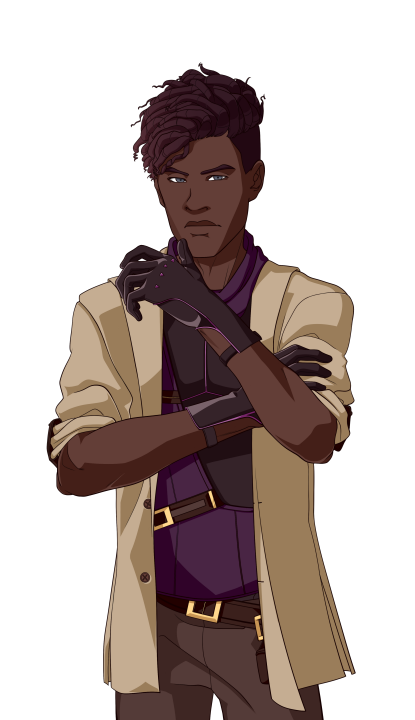 Caspian - Cold, calculating, cynical. Those three words sum up the talented ship’s doctor Caspian. At least, that's what he wants you to think. Too bad he keeps slipping up and showing how much he really cares about the crew, and especially you. With a checkered past and some bad decisions still haunting him, it seems being part of your crew is just about the only thing keeping Caspian grounded right now. 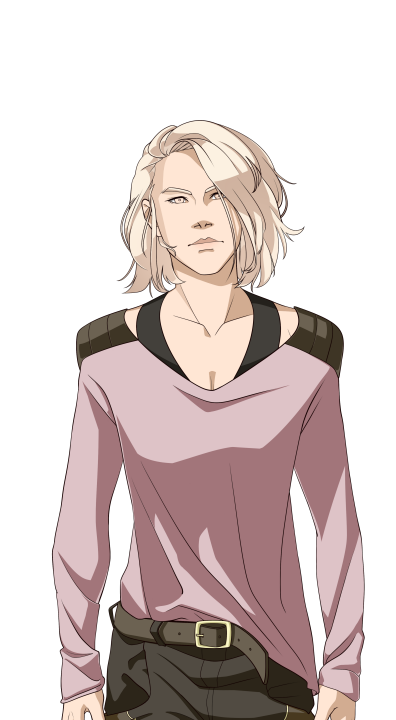 Teegan - Or, Tactical Ground Operation Unit Number 9820693681. A fully functional Archon android, they're basically a walking miracle. No one else has had the technology to make such a thing for over two thousand years. They find themselves awake and stranded in a land they don't understand, where everything they've known is gone. Programmed to learn and adjust, they tentatively join your crew to try and carve out a space for themselves in this strange new world.

Features
Six unique routes for each crew member. Each route has different scenarios and very little overlap. Rob a casino in JD's route, or take down a Dominion space station in Rhett's.
A highly opinionated protagonist. Ava is not a passive character in her story. Make snarky comments, flirt with your crew, and generally lead your ship to fame (infamy) and fortune.
Older characters. Your crew are all capable adults with clearly defined opinions and pasts.
Mature themes. You're space pirates, and stealing is how you survive. Sometimes that means violence, sometimes grift.
Romance. It is rated 16+, though there is also an 18+ version with sexual situations. Rated for general language, crude humor, violence, and adult situations.

Misc Trivia
The easiest pitch for the game currently is: Imagine Firefly, if the captain was a woman and you could romance your crew >.>
Rhett's last name is Gable because the only thing I could think of saying after his name was 'Butler'. (Clark Gable is the actor who played him in 'Gone with the Wind'.)
The game will have 18+ scenes but there will also be a censored "fade to black" version that skips them and leaves bras on female characters that would otherwise be topless.
Character bios and routes are definitely subject to change since I don't really outline I just kind of write the route and figure it out as I go.
Art by the super talented Remnantation, who has a commission thread on this forum!
Backgrounds and vehicles by the super talented Keira, also has a commission thread on this forum!
Last edited by Misszaius on Wed Jul 15, 2020 7:18 pm, edited 10 times in total.
Top

And progress on JD's route is up to 30% with chapter 3 done. Our artist busted her ankle at work though so no new progress to show for that.
Top

Had to update this title to reflect that it's really an otome at this point - six love interests to choose from and a route depending on choice. And leaning into the mature content so language, violence, and sex, no way of getting around the censors on that bit.
Top

Also, looking for another beta reader if anyone is interested/has time. I don't have a budget for it though sadly, so it'd be free. But if you're interested hit me up! Always looking for some feedback.
Top

1. Would you play this game?: Probably, I like sci-fi. Are any of the romanceable characters aliens, though? That's something that I like in my sci-fi romance, and it looks like we only have an android here.
2. Whose route would you like to see next? (Rhett and JD will be completed first): Lex or Teegan.
3. Do you like or dislike the idea that each character's route is unique?: I don't have a problem with it, but I'm interested to see how getting onto a route will work if the routes diverge so much.
4. How do you feel about including a route for an android?: It's not the first time it's been done lmao. I'm iffy about the fact that Teegan is the only nonbinary character you have. There's been a push recently to include more nonbinary characters who are actually human; representation is great and all but when the only representation is aliens and monsters and machines it keeps pushing this idea of humans being anything other than male or female as weird or unnatural. It's the far future, there's no reason some of your humans can't be nonbinary, too. (Also, their route isn't covered by the tags in the topic? Only GxB and GxG are listed, so when I first read the character list I assumed they weren't romanceable.)
5. How do you feel about opinionated protagonists?: Love 'em.
hey hey I made a thing
Top

1. Would you play this game?
Yea. Why not.
2. Whose route would you like to see next? (Rhett and JD will be completed first)
I'm interested in GxG routes
3. Do you like or dislike the idea that each character's route is unique?
Yes, that's very important
4. How do you feel about including a route for an android?
I'm OK with that... if it gonna be well written, of course
5. How do you feel about opinionated protagonists?
Very cool
Top

Whoo boy all kinds of updates. Posted some of the finished sprites for the characters, now absolutely lovely thanks to the talented Remnantation who really brought the crew to life!

JD's route has been edited and is ready to go, Rhett's route is currently being edited, and Morgan's route is still being written but progress has been decent, maybe 2/3rds done with first draft.

Backgrounds for the demo have come in and look amazing, waiting for the last sprite to do the GUI and logo and then code the prologue, put finishing touches on, and release the demo! Hoping to do that early 2020 for the demo, then release route chapters on a scheduled basis as art comes in, coding is done, etc. But there's been a lot of work behind the scenes going on!
Top

I swear I'm not dead! I just forgot about this post. I'm adding polish to the demo now, which got a full rewrite haha so took a little more time than I was expecting. Well, that and I'm a terrible coder. Once I do drop the demo I'll hopefully move this to WIP as it's an actual tangible thing! Still writing Morgan's route (nearly done though, it got waylaid by just having to focus on the demo) and then after that it'll be best android Teegan getting a script!
Top