What Android device(s) do you use right now?

A place to discuss things that aren't specific to any one creator or game.
Forum rules
Ren'Py specific questions should be posted in the Ren'Py Questions and Annoucements forum, not here.
Post Reply
11 posts • Page 1 of 1
Message
Author

What Android device(s) do you use right now?

The context is for creating/testing/debugging your game (either it was made with Renpy or other engine). If you have made games for androids, or have became a (somehow) regular tester for android games, perhaps you'd be interested to leave a comment or two here ....

1. Which handheld/smartphone/tablet/phablet/mobile-gaming device do you currently use?

2. How's your experience with that device(s)?

3. If I were to buy a new one, do you have any recommendation on how to choose or which one to choose? (probably something within 'budget friendly' or best price/performance category)


Thank you for visiting this thread :3
My avatar is courtesy of Mellanthe
Top

My current phone (acquired this February) is an HTC Desire 530. The only things akin to visual novels I've played on it so far are Dream Boyfriend and Dream Girlfriend. Otherwise, I also play Cookie Run: OvenBreak, Blendoku, and some other miscellaneous apps. I don't know much about phone specs and pricing, but it gets the job done and runs pretty smoothly.

If I've run into any issues with the aforementioned games, I think it's mostly because of the apps themselves rather than my phone. DGF is can be really laggy between loading screens, for instance, and both it and DBF will stop working on occasion. I'm not entirely sure what engine they use, but they contain Live2D elements. I've wanted to check out a few other VN-esque apps, but phone space is a thing to consider, hah...

Sorry, I guess this wasn't all that helpful u_u

I have a HTC Desire 510 which is an ARM7 quadcore@1190Mhz
I have not had any issues with any app I install and any Ren'Py game I export for testing works as intended.
I'm currently using it to test my current projects.


If I buy a new phone, It's got to have at least root, or 16GB of internal space. Being restricted to only the apps that were installed upon purchase being allowed to write to SD is a major inconvinience.
Warning: May contain trace amounts of gratuitous plot.
pro·gram·mer (noun) An organism capable of converting caffeine into code.

@Evy : That's actually quite helpful. It helps people decide whether that device (and other similar models) is suitable for playing DBF/DGF or other games that contains live2D.

@Imperf3kt : hm... in addition to 16GB of internal storage space, do you have minimum RAM suggestion? Does 2GB of RAM enough for most use?

@Nyankar : Wow... you have so many testing device.

And yeah, I would also be happy to have that monster (though I could actually just use a powerbank since I don't go around so much).
My avatar is courtesy of Mellanthe
Top

RAM is generally shared with internal memory. My current phone has 4GB of RAM and 4GB of storage (2GB taken up by apps I cannot uninstall) giving the device a total of "8GB storage". Basically its technobabble lies.

Anyway, 2GB RAM sounds sufficient, but I'd personally aim for something with 4GB+ just incase you run a bunch of widgets etc (like I do)

Mostly, the GPU won't matter too much, as android devices usually use mostly hardware accelleration.

For example: My phone at idle, runs at 200Mhz on core 1.
Launch up the internet and a Ren'Py port and We spike to around 70% @ 3cores usage under game load which drops to 30% @ 2cores once loaded. 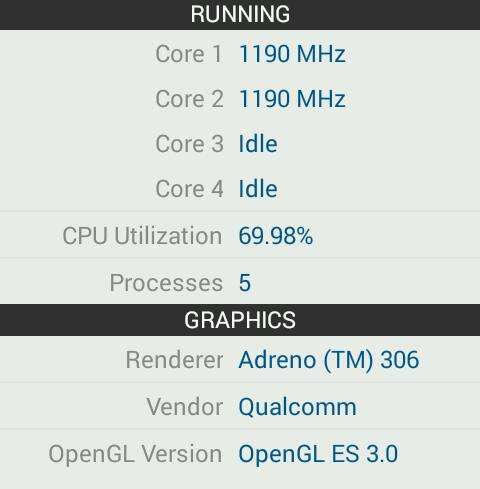 @Imperf3kt : it seems that Qualcomm chipset is the preferred choice, eh?
Does it heat up after you used it for a while? (assuming that you're using 3G/4G instead of Wifi connection)

Btw, I might buy a Redmi Note 4 (Snapdragon 625 version).
Is it a good choice for game testing + heavy browsing/chatting (social media) ?
Does anyone here have any experience with Xiaomi phones?
My avatar is courtesy of Mellanthe
Top

It does indeed get warm, but only when I'm really pushing the cpu or its on the charger at the same time.
Sorry, I do not know about the phone you mention.
Warning: May contain trace amounts of gratuitous plot.
pro·gram·mer (noun) An organism capable of converting caffeine into code.

I'm currently using a Nexus 5X. I've been able to run 1080p Renpy games without issue.
I can't really recommend buying one though, given the current LG lawsuit about these devices (and others) bootlooping from a hardware defect.

Before this I was testing with my Nexus 7 (2013). Being a tablet, Renpy games are much more comfortable on that bigger screen, and I never had problems running them (one again, tested with a couple of 1080p games). Also, since it's a few years old, you should be able to get one pretty cheap. Though if you wanted a new device as your primary phone or w/e, obviously you wouldn't get this.

I did have a Xiaomi Redmi Note 3. Not bad for hardware and cost, but the rom they run on there is garbage, IMO. Fortunately there are a lot of custom roms out there for the device, probably because of the decent hardware/price point.
Personally I'd go for a recent-ish Motorola device, since they seem to be pretty much stock Android with an "okay" update period. Not as cheap as a Xiaomi device, but better support outside of China, and better resale value. Really depends on what your priorities are.
Finished games
-My games: Sickness, Wander No More, Max Massacre, Humanity Must Perish, Tomboys Need Love Too, Sable's Grimoire, My Heart Grows Fonder, Man And Elf, A Dragon's Treasure
-Commissions: No One But You, Written In The Sky, Diamond Rose, To Libertad, Catch Canvas, Love Ribbon, Happy Campers, Wolf Tails

The only reason I didn't choose Motorolla was the price; at local seller it costs nearly doubles of Xiaomi phones with the same Qualcom chip.... >_<
My avatar is courtesy of Mellanthe
Top

1. Which handheld/smartphone/tablet/phablet/mobile-gaming device do you currently use?


2. How's your experience with that device(s)?

The older it becomes, the slower the game (I downloaded from PlayStore) performance is. Although Nexus family get most newer Android OS, be ready to look a way to return it back to previous OS since the new OS might make your device run reaaaaallllllyyyy slow. I did so with my Nexus 7.

No need to immediately resell or give up your old device. Old devices are also good for testing.


3. If I were to buy a new one, do you have any recommendation on how to choose or which one to choose? (probably something within 'budget friendly' or best price/performance category)

I'm ... a Nexus fangirl, actually. Because Nexus family will most likely get most newest OS and they aren't bulked up with unnecessary apps (Imma looking at you, Samsung). I'm not the kind who buys a device the moment it launched/released in my country. I usually wait for the announcement for new device and when that new one is launched, the previous generation's price would most likely down. That's the moment.

If there's no Nexus lineup when I need to buy a new phone, I will pick one with the "native-est" Android OS available (that is within my budget).

And for no apparent reason, I dislike dual-SIM phone.