A place to discuss things that aren't specific to any one creator or game.
Forum rules
Ren'Py specific questions should be posted in the Ren'Py Questions and Annoucements forum, not here.
Post Reply
12 posts • Page 1 of 1
Message
Author

Also would love to hear your ideas how to bring independent Visual Novel projects into the consciousness of the players? Spread the knowledge and together we can grow and flourish

Very, very bad. And stupid. (In my opinion)

Building marketing on controversy is not really a good option, it *might* catch, but even if it does, after initial phase it will only go downhill. It's just a matter of someone pointing out that it's just bad taste.
On top of that, it just shows that the developers don't really have any other trading point than controversial stuff.
There are just things you shoudn't use, even for a joke-commercial.
In the end, you might end up even worse than doing none marketing.

With indie games, it's better to find the best point of your game and build marketing around it. Why people would like to buy the game?

Another thing is copyright. The video you used comes from a movie I think, do you have a permission to use it? I don't think so.
I know, you may say "But everyone uses it for memes". Alright, but situation changes drastically when money comes in.
"But they won't find me, they won't sue such small group." You never know, it's better to be safe than sorry.
If you really insist on using the image of real characters, it's better to hire actors or something, and still, you need to be very carefull how you portay them.

Awesome and very important and valid points! We should really think about taking the video down after a while. Lets see what other people think?
Top

The problem with using memes to advertise something is, popularity is fickle. Memes come and go. What's hilarious today might be considered stale ten years from now.

Like, if I were to go "I'll take a potato chip...AND EAT IT!", that might get SOME chuckles out of people familiar with the source material it comes from and/or people who think being melodramatic about potato chips is funny. But otherwise? It'd probably mostly get a few head-scratches, "I don't get it", and/or "that potato chip meme is stale". Part of the humour of memes relies on being an inside joke, assuming everyone else "gets it". If the joke can stand on its own outside of the material it comes from, it might be able to stand the test of time, but if it requires inside knowledge of the work in question to really "get it", then it's more likely to fall flat.

(also, there have been various quotes and phrases from older literature that have stood the test of time, but I wouldn't quite compare, say, "all that glitters is not gold with "I'll take a potato chip...AND EAT IT!")
Reader Beware!

Caveat Lector wrote: ↑
Fri Dec 08, 2017 3:23 pm
The problem with using memes to advertise something is, popularity is fickle. Memes come and go. What's hilarious today might be considered stale ten years from now.

Thank you for your input. Only thing I'm am pondering is that is the "short" life span of a meme any problem in game marketing? Any game (and surely not my small indie war visual novel game) can't have any current value ten years from now. Games life span is pretty short nowadays I think?
Top

In general, it's a terrible idea to put Nazi imagery in marketing. You're trying to reach out to the general public, and that public also includes people of Jewish decent and faith. It's not illegal (except in Germany), but it's in bad taste.
Top

Caveat Lector wrote: ↑
Fri Dec 08, 2017 3:23 pm
The problem with using memes to advertise something is, popularity is fickle. Memes come and go. What's hilarious today might be considered stale ten years from now.

Thank you for your input. Only thing I'm am pondering is that is the "short" life span of a meme any problem in game marketing? Any game (and surely not my small indie war visual novel game) can't have any current value ten years from now. Games life span is pretty short nowadays I think?

The meme in question here is over 10 years old, so that in-itself is a far longer life-span than most games could say to have.

When a meme is over-exposed ppl get sick of it, and any reaction they used to have to the meme disappears - see "the cake is a lie" or "all your base are belong to us".

Seeing your vid my reaction was just "wow, this meme is old". There's also multiple misspellings, the subs are badly timed to the dialogue, and a general feel of being "thrown together", that I'm not sure would go over well even considering a market that'd actually respond positively to this meme.

When trying to sell a visual novel, I'd argue that writing is one of the big, important things to focus on. If the promo material has mistakes, ppl will often subconsciously link this to the game itself and write it off purely based on this feeling.
I know I'm very resistant to trying vns with badly written/spelled information packets, even though I can't actually make any judgement of the writing in a game from how the store page is structured.

I think that in most cases the best marketing strategy is a good product. If there is something good about the product then there is no need to shove it down everyone's throat.

As a general rule of thumb, I think it is usually a bad idea to market your work using memes and/or anything that others might find offensive. That most definitely includes Hitler & Nazis.

Now, this is not to say that anything using memes/offensive humor will fall flat. Quite the contrary. 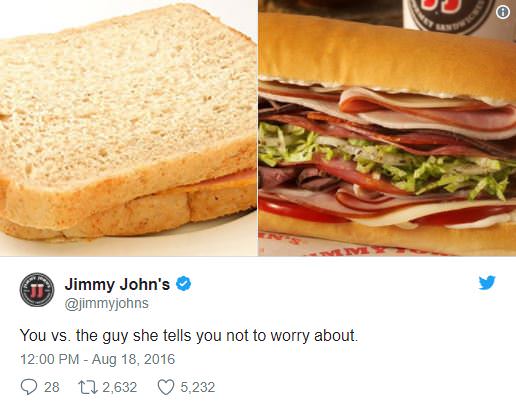 Which draws on the very popular "You VS the Guy She Told You Not to Worry About" meme.

It's a funny & silly ad. It's also kind of endearing and adorable to think of yourself as a loser sandwich that doesn't quite measure up to the more impressive sandwich from Jimmy Johns.

But, to be perfectly honest, I think that when you use memes, you date yourself and sometimes risk alienating people who might not be familiar with the meme or the joke. And also - I know people who are actually turned off by certain memes and more likely to dismiss or dislike a product if memes are used.

And as for something that is offensive & shocking, well. There have been offensive advertisements and marketing campaigns since the dawn of time.

But does that mean we should use them? I don't think so- I think it is probably wise to avoid offending others if you can manage, especially when trying to promote something that you created. That's not to say that we should censor everything, especially when it comes to games with disturbing & adult content. I have played games with material that many would find messed up or disturbing - and am not advocating we change those or anything like that. I'm more talking about how we market and advertise to others. Why risk turning people off to what you've made before they've ever even played it?

And if you do have solid reasoning behind creating a campaign or ad that is offensive, I would just caution you to think long and hard about the repercussions or backlash that might follow. Unfortunately, we live in a world in which online "witch hunts" (of a sort) are a real thing. There are countless examples & varying scales of how mean & intense people can get online.

And while the masses might not get too upset over a game trailer for an indie game, but it is something to consider when creating things that could be offensive to others.

I would also like to go a step further and critique your video / concept. It seems like you are aiming for humor - which is can be great approach to drawing people in! Humor is a wonderful way to disarm others, and make whatever you are promoting memorable without being to "sales-y" or coming off as self-promotional/"hey look at our game and how wonderful it is buy it now!!!".

Two of my favorite illustrators, Gemma Correll and Andy J. Miller, are the masters of using humor in their work. Gemma Correll creates these delightful little pieces, that she gives away for free, which are hilarious. She, in return, gains a lot of attention for her work, and also jobs because of it. Andy J Miller is a hilarious and wonderful human being, and his ability to speak and make others laugh and smile has gained him & his work quite a bit of attention.

So, while I think humor is a good approach, maybe you are missing the mark here with the video you've created. I would encourage you to explore other ways of creating a humorous or funny video trailer that would not be offensive. And if you are unsure where to start, it might be worth looking at what other gaming companies have done in the past to use as inspiration.

Awesome insights, thank you! Yes, we were aiming for humour that is correct. Maybe I just take the video down now

Thank you all for your input!!

The video is now taken down, thanx again for you all for feedback!
Top

Cindigo wrote: ↑
Fri Dec 08, 2017 7:48 pm
I think that in most cases the best marketing strategy is a good product. If there is something good about the product then there is no need to shove it down everyone's throat.

GTA. Because why not? We all seen what happened from the past two decades.