A place for game announcements, and for people to discuss games being made.
Forum rules
Please read the sticky before creating a new topic. Linking to Kickstarter/Crowdfunded games requires a demo. Updates to Patreon-backed games may be posted once every 2 months. Adult content should not be posted in this forum.
Post Reply
110 posts
Message
Author

UPDATE 2021: Hello everyone, you can grab the free demo on Steam now and see what kind of narrative experience Sacred Fire is for yourself:

Create a character and find your way trough the story: 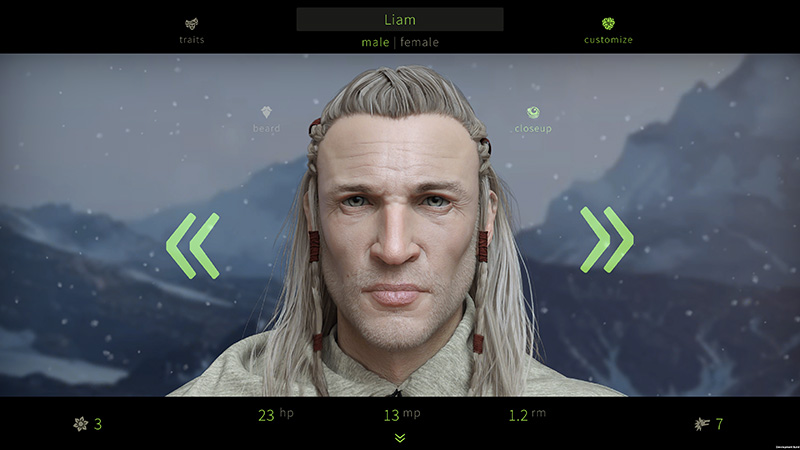 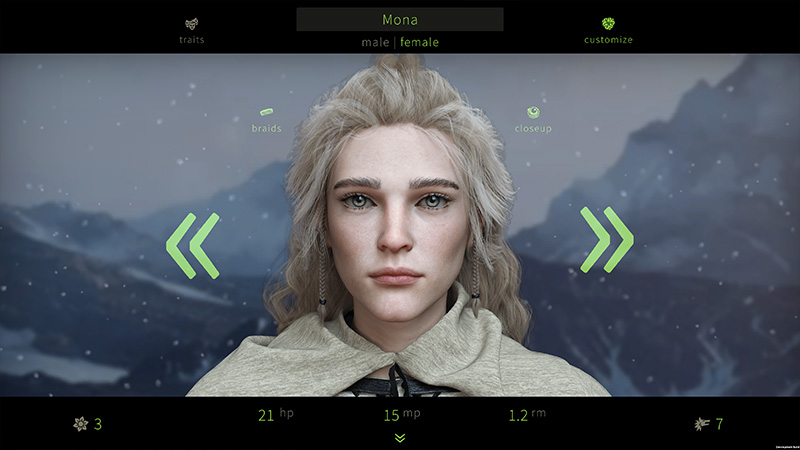 And here is the game cinematic intro:

It's been a while, so I'm very happy to share with you how Sacred Fire looks right now: 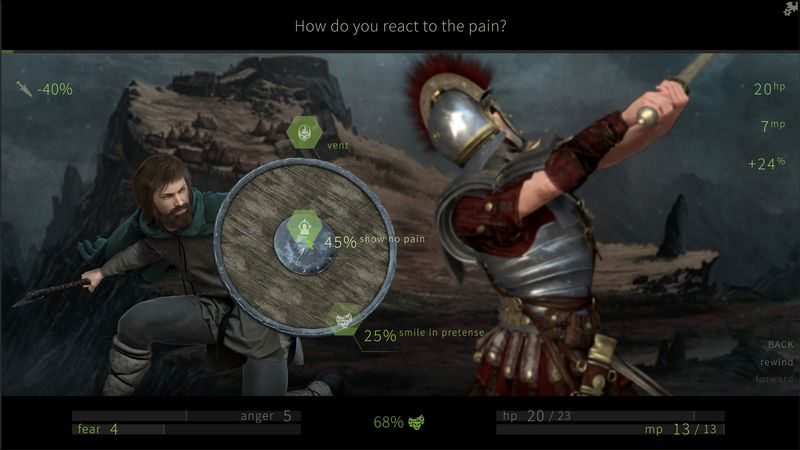 The game will have full voice-over in English and will be translated to French, German, Russian, and Simplified Chinese. 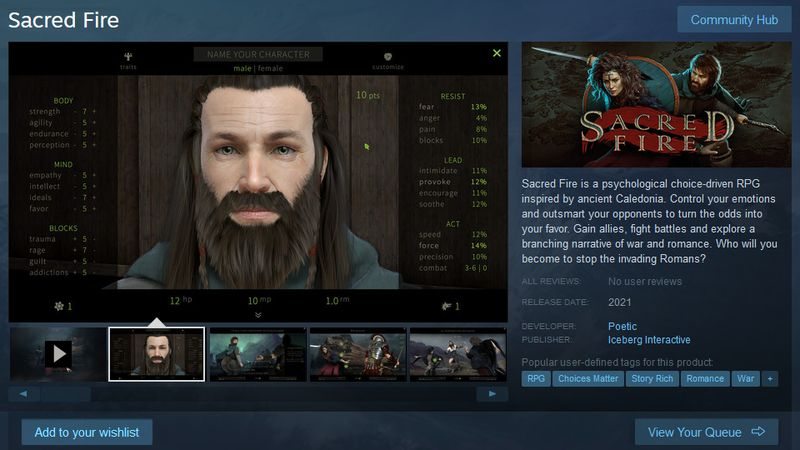 Sacred Fire consists of 3 acts. Each of the acts has 2 distinct branches. There are 5 distinct endings and 8 major achievements reward scenes.

If you'd like to help wishlist the game on Steam now: https://store.steampowered.com/app/900400/Sacred_Fire/

UPDATE 2016: Hello, everyone, it's been too long, but the good news is Sacred Fire is alive and well and leveled up quite nicely.

Sacred Fire is a turn-based, psychological RPG about survival, power, and the search for meaning, inspired by ancient Caledonia.
Build your will to show courage in battle and cunning in the throne room. Rise through renown, blackmail, or loyalty. Inspire others to crush Rome or to build a nation.

This is our new teaser showing gameplay, visuals and storytelling, voiced by Doug Cockle, the voice of the Witcher:

Steam Greenlight Concepts: http://steamcommunity.com/sharedfiles/f ... =800757379
If you like what you see, up-vote us! Every vote counts! We are already #1 Most Popular This Week, your up-vote can help us to get the coveted 5-star rating. Thank you!

Check out our new website: http://www.SacredFireGame.com
Subscribe and be the first in line to get Early Bird discounts when we launch a Kickstarter campaign in March 2017!

Summary
Sacred Fire is a narrative RPG, integrating story and gameplay by using emotions in both combat and dialogue.
Inspired by ancient Caledonia, the story follows a band of survivors caught up in a century long conflict.

Premise
The war with the Empire is escalating and the final conflict threatens to annihilate your way of life.
Can you build a personality strong enough to survive? Can you forge relationships worth living for?

#3 all characters evolve each turn
NPCs act as opponents in a turn-based strategy: they develop skills, make alliances, get into conflicts and raise in influence

#4 character exploration
Character relations, agendas, motives are unknown. You have to explore and uncover them as strategic resources.

Features
- play as a male or female character, customize your appearance, choose your descent and inborn potential
- choose your side, your goals, your methods and what’s worth saving
- explore a cast of evolving characters
- build up your personality, emotional control, relationships and influence
- will you use your influence to crush enemies, or to avoid conflicts and reach your goals without violence?
- will you gain renown with physical deeds, your heroic personality or by crafting amazing art?
- will you win people over with gifts, looks or empathy?

How to get involved?
Poetic studio is a one man indie game studio.
We are very happy we made it this far and that you are here with us at the beginning of a new flavor of RPGs.
Every single fan means a lot and can make a difference.
Let us know what you think and help us spread the word.

This is the sort of game I insta-buy.

Can't wait till it's released. Thank you for your kind words, it means a lot.

My fellow indies told me the VN community is very welcoming and supportive, and they were right. I realize my game is different in many aspect from most VNs, but I hope that what unites us all is the passion for good storytelling and interesting characters

I'm not interested, since it lacks support for homosexual characters, but I gotta say, the art is wonderful and I wish you the best of luck. I can already tell that his game will be quite the seller.
Top

Wow, this looks amazing. I'm always on the lookut for games (rpgs in particular) with lots of choices and customisation where you can actually affect the storyline in significant ways. I'll definitely be watching this thread.
Top

Romance, warfare and intrigue is always a win-win for me.
HIATUS:
[A Simple Act]
[All the Pretty Flowers]
[The Texture of Love]
Top

@bellice: thank you for your kind words, it means a lot. I'll be happy if I break even and can make more games with many diverse settings and themes in this format.

@Harumi: thank you, I've been working on this for so long, it's easy for me to lose perspective, so it means a lot. Yes: nuanced self-expression, subtle choices, changing NPCs and influencing story events are key to Sacred Fire. Currently I have 5 different endings in mind for the main conflict, but each character relation can take various paths as well. I also hope to add multiple origin stories.

Equipment and appearance customization is important, as NPCs react to the beauty and menace of your appearance. Another aspect is you grow attached to your items, so if you make a lot of positive memories while wearing an item, you grow fond of it and it becomes your favorite, boosting your mood and confidence whenever you wear it. You can also craft and enhance any item to boost it's beauty, menace or prestige. These 3 aspects of your equipment that act as a multiplier to all renown gained, expressing your visual memorability.

@Hazel-Bun: thank you, I sure hope you won't have to wait too long! The plan is currently to build a following for a Kickstarter campaign. The campaign result will basically decide how much story content in all themes I can explore.
Top

Welcome, I hope it does well for you

Thank you! The feedback and reactions are positive so far, I even have an article up already on Gaming on Linux. No idea how that happened, but a few hundred people saw it already. I have to get used to how huge the internet is

A very nice member of this forum also notified me, that there is a thread on RPG Watch forums about my game. Seems like I have to go clear some things up over there.
Top

I have to say that I really appreciate the effort that went into the initial presentation of your work in progress thread alone! I'm looking forward to seeing this project evolve over time.
Top

I just got to say... this wip game is so inspiring to me. It made me feel that the VN/RPG game is pretty limitless! Just look at that attention to detail! Great great work! It's astounding you did this all by yourself. Did you use any gaming engine or did you code it from scratch?

Thanks so much for this and all the best of luck!
ameliori
Twitter • Patreon
Top

I've never gotten into RPGs, but I do like the look of the artwork.

Thank you all for your kind words, it really means a lot. I've been working on this game for a long time in isolation, so seeing people appreciate my work is very motivating. Location art is by: http://www.rene-aigner.de/ and music is by: http://seanbeeson.com/, the rest is me. The game is build in Unity, it was the only one to support all the target platforms back then.
Sacred Fire is a Role-Play Your Own Adventure Game where you need to master your emotions and outsmart your opponents.
Develop your inner strength in this tactical choice-driven tale of war and romance inspired by Caledonia.

Wishlist on Steam
Join our Discord
Join the email newsletter

The art is absolutely gorgeous, and the setting sounds interesting as well. This will definitely be on my to-buy list next year, though I agree with bellice that it's too bad that there will only be straight romances to pursue. Still, this is a purchase I'll look forward to make

Everything looks extremely polished - the website, the teaser videos, and the in-game artwork. I really admire your dedication as a one-man team! I can see a game like this getting a lot of attention when it comes out!

If I had any critique (besides, yes, the straight-only romance), it would be that the faces in-game don't seem extremely expressive, and that the characters are mostly emoting through their body language. I kept trying to decide if it bothered me or not while watching the videos, but I thought about it long enough to mention it, I guess! Though, most of it is Etain, I think (I think that's the lady), and it sounds as though that's kind of her thing. Oh well, take from that what you will! Maybe I just want her to have a BIT more presence - right now she sort of has that "glazed default face" thing going on

Other than that, though, the gameplay elements you've posted (with the corresponding GUI) seem very fun and interesting! I definitely would like to play it.
High Fog || tumblr
Top
Post Reply
110 posts