A place for game announcements, and for people to discuss games being made.
Forum rules
Please read the sticky before creating a new topic. Linking to Kickstarter/Crowdfunded games requires a demo. Updates to Patreon-backed games may be posted once every 2 months. Adult content should not be posted in this forum.
Post Reply
160 posts
Message
Author 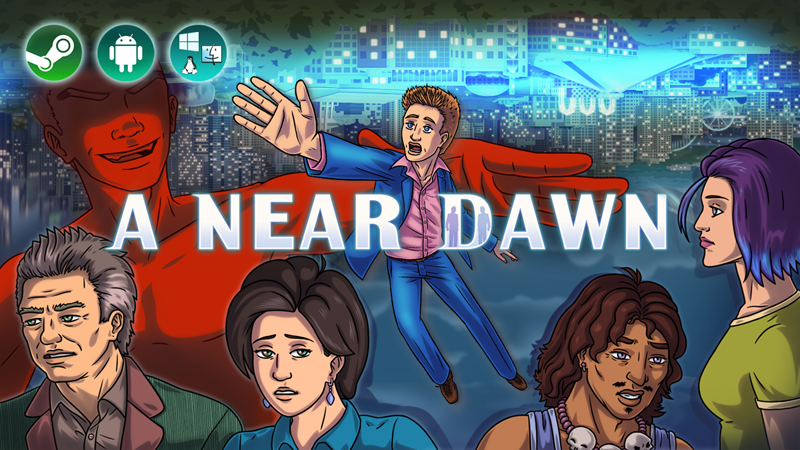 Update #10: Mysteries & Science Fiction in A Near Dawn

I just gave a pretty in-depth interview to IndieGraze about A Near Dawn and Visual Novels.

Our KickStarter wrapped at 76% ~ We didn't quite reach our goal. It will be nice to take a little break and reflect on things. You can download the full Prologue for A Near Dawn FREE on Itch.io (Russian Version available, as well) / Steam / GooglePlay! (Android Version) A Near Dawn is a visual adventure created by Leonid Pilchin. It is the first commercial project from Far-off Daydream Games.

A Near Dawn is an enjoyable yet devastating psychological thriller with amusing highs, gut-wrenching crashes, and mature themes. While grounded in reality, supernatural and science fiction elements will unfold as the story progresses. The opening sees our main character - Seattle-based attorney Sam Nichols - who seems to be experiencing disturbing psychological difficulties, exposed to progressively dire circumstances that threaten to unravel his reality and destroy those closest to him. Haunted by personal demons, with your law firm struggling and on the brink of collapse, you take the helm on an important new case involving a ruthless multinational corporation, defended by some of the vilest people you ever had the misfortune of knowing. The odds already seem stacked against you, but you will soon learn that things are not as they appear, as a deeper conspiracy begins to emerge. Where will you end up if you keep untangling the threads? You must be brave to uncover the truth. This project is an interactive visual novel adventure featuring:
The plot will not progress without you, you are in control of the main character's actions at every turn. You will explore your environment and speak to other characters to learn about what is happening and what must be done. A key concept of this game was to give as much freedom and put as much detail into the content of the story as could be managed, as such you will have the option to skip important elements of the game not necessary for advancing the main plot if your character chooses to ignore them or fails to explore them. At the same time, you will not be able to move forward without resolving issues necessary for advancing the story along. The stage is set - in fair Seattle, where we lay our scene. The neighborhood diner near your workplace. Our story begins here with a chat between two of our protagonists over a lunch that goes terribly wrong. Where, oh where could this be?

1. What do you think about the concept, pacing, and gameplay?
2. What are your impressions of the characters and story? Who is your favorite?
3. How do you like the art style?
4. Would you support this project on KickStarter? :)

Overall, I'm intrigued. My main piece of advice: Write only what you can manage. For instance, if you can't devote enough free time to include a sanity meter, then don't include it in the game. Make sure the scope of your game stays manageable.


LeonDaydreamer wrote: Back To Reality is a text-driven adventure game with puzzles, dynamic decision making, and multiple endings.

If one of your main goals is puzzle solving gameplay, then feel free to include it. Just make sure to playtest it, and let several people try it before releasing the final version. Think about other video games that include puzzle elements, and ask yourself what works, and what's too frustrating.


LeonDaydreamer wrote: Rather than the visual novel format for this game, I chose to go with a more text-focused interactive illustrated novel style.

gekiganwing wrote:Overall, I'm intrigued. My main piece of advice: Write only what you can manage. For instance, if you can't devote enough free time to include a sanity meter, then don't include it in the game... if one of your main goals is puzzle solving gameplay, then feel free to include it. Just make sure to playtest it, and let several people try it before releasing the final version..... I'm not entirely sure what will make your format different. Please provide details. How are you implementing illustrations? How much emphasis is there on reading text, and how much emphasis is there on looking at images?

Hi Gekiganwing! Thanks for taking an interest. :-)

I totally hear you about not biting off more than I can chew. That's one of the reasons I decided to put the emphasis on telling the story through narration and dialogue (why I say it's a text-driven adventure game), but it will have character portraits and background art as well.

Yeah, I think I'll probably wind up adding an official walkthrough to go with the game. I don't like the idea of people getting stuck and annoyed, but I do want to offer the chance for the player to figure things out for themselves.

I still have to work out how some of the elements fit together, but I'm not making the game like your traditional visual novel of the Ren'py variety, I don't think that style would fit the content and the way I'm telling the story. The gameplay involves interacting with your environment, as well as with other characters, and it's quite detailed. So I've been putting the game together in Twine, as it has a good foundation for what I'm going for, and so far it's been working well.
Top

I'm been working on the art (slowly, but surely).
Here are a couple of other supporting characters from the game... Janet has been the personal secretary of your boss, Harold Kline, for nealy
twenty years. Always the professional, she would never leave his side. Zack is a stressed out paralegal. Unfortunately the firm might be in over
its head with their new case, this leaves poor Zack having to jump
through some hoops. Stephanie is another of our paralegals. Unlike Zack, she is always
bubbly and enthusiastic. Whatever she's doing it's working, I wish
I had her energy!

Hey this does look pretty interesting. I really like the way the art looks. With your description, you can totally see it in the characters. Keep up the good work and I'll look forward to updates.
_______________________
Project Lost Girl

ViRiX Dreamcore wrote:Hey this does look pretty interesting. I really like the way the art looks. With your description, you can totally see it in the characters. Keep up the good work and I'll look forward to updates.

Thanks a lot ViRiX Dreamcore!
I think I'm starting to come into my own in terms of character design (knock on wood). I used to be really discouraged with not being able to draw characters the way I imagine them, but so far I'm really happy with how these have been turning out. :-)

Re: Back To Reality [Thriller]♦[Supernatural]♦[Adventure] One of these things is not like the other...
I wouldn't want to run into this guy. Did I mention a mysterious supernatural element to the story?
Who is this dark, brooding figure and what role does he play in the unfolding events anyway?

Re: Back To Reality [Thriller]♦[Supernatural]♦[Adventure]

Mei works for opposing counsel. Unfortunately for her, part of her job is having to deal with you.

Morgan is an inspector for a regional public service department. You may or may not be the bane of his existence.

Sam is a Seattle attorney who managed to maintain most of his idealism about how the world works. No, it is never fair, but at no point would you hear him say there is nothing that can be done. Though he swears to protect his colleague's moral high ground, he himself is not above throwing a curve ball at the opposition to see what ripples it might stir. His intelligence, even his sanity will be put to the test amid a dark web of conspiracy he has the misfortune of uncovering.

Aaaand, I'm back!
Things got a little hectic at work the past few months,
but that's done now and I now make my return to this
project I'm quite passionate about.

I finally finished the character design for the other main character in the first chapter.
His was the first design I drew, but I wasn't satisfied with the way it turned out and always planned to go back to it once I figured out the art style for the game.

Attorney Harold Kline (Harry) is more than a friend to you, he has been your mentor your entire professional life.
Nearly everyone has turned their back on him now, but you would never.
Can you save this man's life from falling apart?

Sign me up! This sounds right up my alley.

I have the vibe the mystery will be really intricate and complex. I'm looking forward to the roller coaster of plot twists I'm expecting to take place. This sounds like the type of game that'd constantly keep me guessing, taking back my previous guess, guessing again, and so on and so forth.

The sanity meter mechanic sounds really neat, too, and I'm really looking forward to how the meter ties in with the plot, especially when Sam encounters these unsettling situations. Holding onto his idealism as an attorney must be tough, but that's a trait that I respect in people, especially if they can maintain a sense of realism alongside it.

I'll be keep an eye out for this game! Thanks for being considerate with walkthroughs too, since I'm not too experienced in puzzle games. xD
"Everyone was jumping a giant jump rope, but I was too scared to join. I was hesitant, like a child, always waiting for you."
Current Project: Emissary of Starlight
Top
Post Reply
160 posts