Matters of the Heart [GXB][Fantasy][Magic][Dueling][Puzzle]

Matters of the Heart [GXB][Fantasy][Magic][Dueling][Puzzle]

When it comes to determining your future, is it best to trust fate, or should you turn chance in your favor?

Hello! After collaborating with people and really getting the ball rolling, I've decided it's time to finally release news of Twilight Beacon's first visual novel to the world.

The story revolves around Rebekkah Patel, a 20-year-old Chameleon girl in the land of Dusk. Two years out of magic academy, she aspires to become a magician’s assistant, but her magic flow is erratic due to her mixed heritage. Rebekkah has spent most of her time trying to mask her disability, rather than learning to cope with it, but in the past it led to many disastrous results. Given one last opportunity to prove herself at the Matchmaker’s Ball, Rebekkah is determined to make a name for herself in the performance world...

Maximillian Govinji - or just Max, for short - is a Komodo. He is 24 and one of Twilight Beacon’s up-and-coming gem setters, a profession that produces marvelous inventions and innovations out of the gem rich desert region. He is not attracted to the world of performance, and initially tags along with his buddy Chris Singh for something to do. On viewing Rebekkah’s profile, however, he is intrigued, and he seeks her out at the Matchmaker’s Ball.

When the two meet, sparks fly, and Max offers Rebekkah an opportunity she literally can’t refuse. He introduces her to his world and his friends, and they get along well. But when a magical mishap occurs, Rebekkah is forced to make a choice: should she have faith in the new friends and relationships she’s begun to forge... Or should she force chance in her favor?

Matters of the Heart exists in a storyworld I've created called Dusk, which itself fits into a set of stories known as Chance, Fate, and Destined. To learn more about the people of the world, you can see our topics on our blog:
Races of Dusk | Setting

2/26/2015 - I posted this thread! Along with some art assets.
Story:
Demo: 90%; we have some tweaks that still need to be done with editing and the branches.
Overall game: 25%; The story is already plotted out, but we're working on getting the demo together and out first.

Music:
We're using stock music for the time being. Depending on interest in the project, I may commission other music 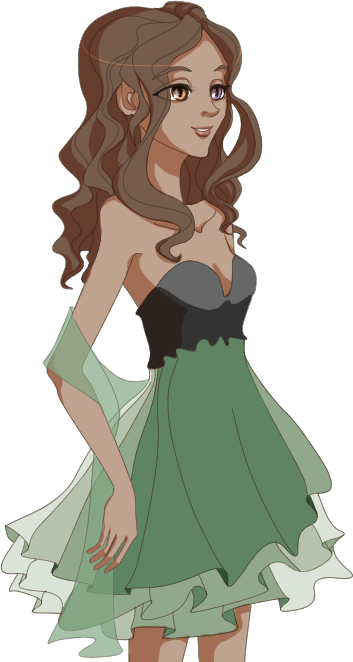 Rebekkah Patel – A chameleon with olive colored skin. Her right eye is orange, and her left eye is purple. She wants desperately to be a magician’s assistant, lending her magic potential to a magician’s acts, but refuses to accept her disability and instead tries to mask it. Rebekkah often wears purple contact lenses to try to mask her heterochromatic eyes. She has shoulder blade length, curly, dark brown hair. She is 5’7”. 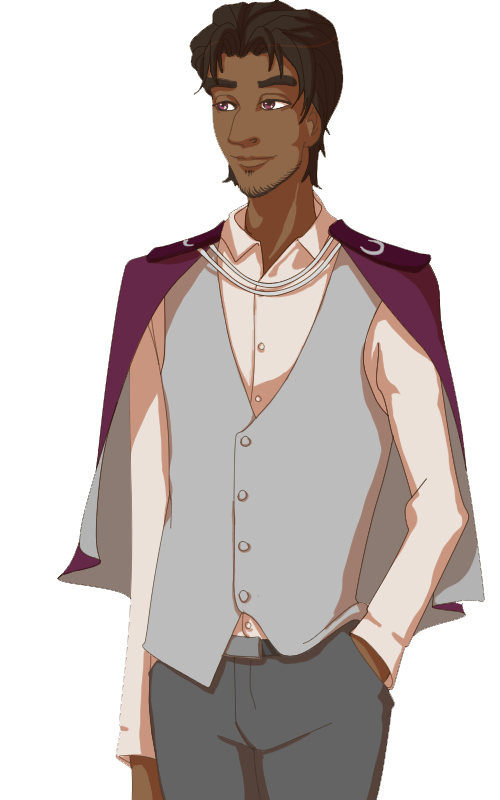 Maximillian Govinji – A komodo. His eyes are a luminescent shade of purple. Laid back, he is a gem setter that enjoys solving puzzles and creating solutions that help other people’s lives. He doesn’t like the flashy lifestyles that magicians lead, and is convinced that being a performer leads primarily to debt and ruin. He is very pious to both the desert gods and is well grounded. He has deep brown skin and dark brown/black hair. When he is working, it’s pulled back into a ponytail with about two and a half inches lead. Max stands about 5’11”.

Anna Malhotra -A tuatara with green eyes. She was the assistant to a famed magician, and she is now the head of the Apprentice’s Guild, Twilight Beacon’s leading and most competitive magical recruiting agency. She has wavy blonde hair, which she normally keeps pinned up. She has a sharp personality, and though she is friendly, she has very high expectations for those who gain entrance to her guild. She is 5’9” tall. Her hair has turquoise streaks during the waltz.

Chris Singh – A tuatara with orange eyes and a harsh face. He is moderately attractive, Chris is a performing magician, and he has a very flashy wardrobe and appearance. His hair is cut into a long mohawk, and his left eyebrow is pierced. He holds a grudge against Rebekkah, as she was his last assistant and one of her mistakes cost him a lot of money and some of his reputation. He is 6’2” tall.

Diana D’Souza - Another chameleon, and the assistant of Max’s neighbor Samson. They are married. Diana is small and very delicate looking, around 5’4” or 5’3”. She has dark hair and her eyes follow the same heterochromia pattern as Rebekkah’s (right orange, left purple). Outdoors and indoors, she is always completely covered on her arms and legs; outdoors, she wears hijab style hair dresses and a veil to protect herself from hexes. Her scales are a pale champagne gold color, and she comes from a village relatively not too far from Rebekkah’s. She is older, in her early 40s.

Samson D’Souza – A komodo in his 50s. He is a potions master and also teaches classes at a local magic school. He and Diana run a magic shop in downtown Twilight Beacon where Rebekkah tends to hang around. He has salt-and-pepper hair with flecks of gray throughout. He is fairly kindly, though he has an infatuation with his assistant Diana. He is stout, and actually is the same height as Rebekkah (5’7”).

Rebekkah's Rival (This character is still being worked on.). Having attended the same school as Rebekkah, she did not qualify to get into the apprentice's guild. A full-blooded tuatara with green eyes and blonde hair, she looks down on chameleons and their "stunted" blood. Whenever she gets the chance, she tries to slight Rebekkah.

This thread is posted to give updates here in addition to our website and social media presences. I'll post about any playable demos that are available here, and I welcome respectful and constructive critique. Additionally, if you feel like you'd like to contribute by helping us with music or background art, please let us know! You can PM me. Right now, this is just a demo and as such, a non-commercial work. Iceramyst is graciously helping us on a volunteer basis for the demo.

I would hope that the game can remain free at the current time. Any assets or code that I'd need to purchase would be coming out of pocket.

Feel free to ask any questions you might have. Thanks for being here for Twilight Beacon's first project.
Last edited by KuroKoneko on Fri Feb 27, 2015 1:42 pm, edited 2 times in total.

Re: Matters of the Heart [GXB][Fantasy]

This space is reserved in case I need it for something. Nothing to see here...

I'm particularly fascinated with the mechanics. I can't wait to hear/see more about them. I love Hashi, but I imagine that something even just slightly similar would be a nightmare to program. Congrats on what you've done so far.

Looking forward to the demo.

Thanks so much! Yeah, I liked the story but I wanted to try and do more than a branching dialogue. The storyworld has so much about it that's rich, and I felt it'd be a waste not to explore it.

It's also going to be slightly different from Hashi, with additional requirements beyond "this many bridges must touch".

Love the character design!!
HIATUS:
[A Simple Act]
[All the Pretty Flowers]
[The Texture of Love]
Top

Thanks much! Iceramyst was really good at working with the written descriptions and references that I gave her. ^_^ I never imagined they'd come out this close to what I had imagined!

Just a small update today. I am working on GUI stuff. This is my first time doing one (I do web design during the day), so I've been playing some of my favorite games and looking at how they do things. Will be posting more later on tonight.
Last edited by KuroKoneko on Thu Mar 05, 2015 12:41 am, edited 1 time in total. 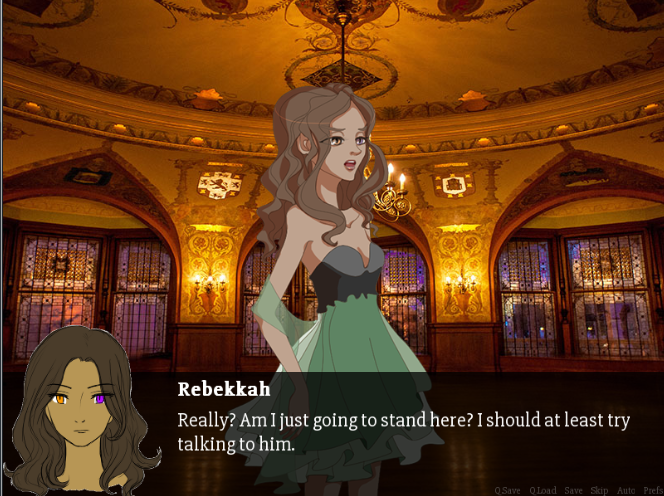 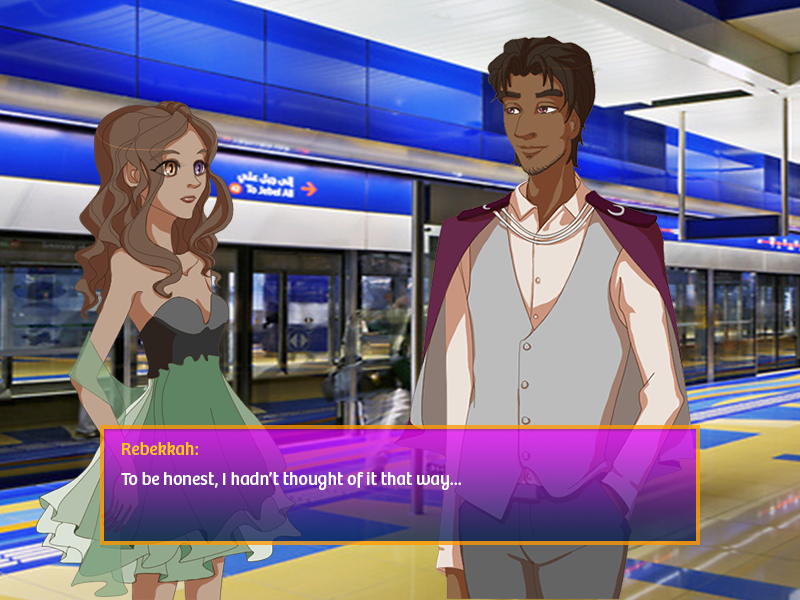 Screenshots, with stock images for the background. Had some breakthroughs with the GUI. Will be posting tonight. Had to readjust my sizes for some things. Avatar at the bottom is old artist's art.

Just a quick update: Haven't done a whole lot but fiddle with the interfaces a touch. Does anyone have any feedback they can provide on the GUI so far? Like or dislike? What about the color choices? Should it be more or less intricate?

I do have a question the text boxes, actually. Above you listed two, one with a solid purple background and the other with a gradient orange-purple. I also see in another you feature another gradient purple-dark purple (and another one with just the head of the main character, but I just assumed that was a fill in).

If you're looking for feedback on that side of the GUI, I really recommend one of the purples. The orange gradient was a bit difficult for me to read, personally.

I like the menus you have for loading and escape. Truly, I wish I had a better vocabulary, but alas, I do not. Therefore, I will settle and say that they look pretty neat.
Top

Hey, this looks interesting! The art looks great, and the story's pretty okay.

Regarding the textbox though, I think darker colors are better if you're going to use white for your text color! (Like the purple one c:)

I like the menu for the options as well!
Top

Hm this seems pretty cool and I like the characters. Gotta agree on the textboxes though. The purple would be good.

I see in the screenshots that the normal speaking text boxes are dark and somewhat transparent. That is good.

As for the UI, that looks pretty good to me. AAlthough against the background that's currently there, it blends in a bit too much. Maybe a darker edge or shadow to make them standout a bit more would be good.

Sorry that it's been awhile. I switched jobs and haven't had a lot of time to spend on the game.