A place for game announcements, and for people to discuss games being made.
Forum rules
Please read the sticky before creating a new topic. Linking to Kickstarter/Crowdfunded games requires a demo. Updates to Patreon-backed games may be posted once every 2 months. Adult content should not be posted in this forum.
Post Reply
78 posts
Message
Author

Wow,that is absolutely breathtaking. I can see the fragmented heart on her chest, but then she's also surrounded by glass shards... I wonder what's up with that?
hey hey I made a thing
Top Hey everyone, sorry for the lack of updates! Heart Fragment is still chugging along. Here's a look at the Clive sprites!
Work in progress:

And don't worry! It's important that the game is slow, but it is made.
Top

Hey there folks!! I'm so, so sorry updates stopped for so long. The reason was that my sprite artist kind of... disappeared on me. It was discouraging as I had paid in advance but I've been unable to get in contact with them and it really took a blow to morale, and to my financial situation. Regardless though, I'm back to it with a demo available for download on Itchio!!

I'm so grateful for everyone's patience, and I hope you'll like the progress I've made despite the struggles along the way!
Work in progress:

Well done everyone! We are already 5% funded in the first 24 hours!

I'm so proud of how much we managed to achieve in just one day! 5% may not sound like much on the surface but it is absolutely an amazing beginning. Thank you all, from the bottom of my heart.

Interested in knowing a bit more about Heart Fragment? Here's some features you can look out for!
If you're excited for these features, make sure you share this campaign around if you have the chance to do so. Heart Fragment is a goal I desperately want to make a reality, and I need your help with that!

Make sure you keep an eye out. Within the next week I will releasing a side story as well as an updated demo that includes a preview into each route!

Glad to see the project is alive, keep up the good work!!
https://soundcloud.com/joshua1207
My newest hits^

After a longer wait than I intended due to some... technical issues, the extended demo is now up!

The extension includes a preview into 3 of the routes, and an option to skip any content you’ve already seen. Additionally there is now a version for MAC available as well alongside PC.

The Kickstarter is going quite well, with $635 currently pledged towards our goal - approximately 20% of the necessary funds. If you can, please share Heart Fragment around or check out the Kickstarter yourself if you haven’t already!

Thanks a bunch everyone for your support so far!

PS: Its come to my attention that the game’s file size is … kind of huge for a visual novel. This is because all images includes are not compressed and are in their full original glory, as well as the music being HD. In the future, would you all prefer I compress this into a smaller size? Doing so would mean that the images and music may have a bit lower quality but generally shouldn’t be too noticeable. High quality, non-compressed images and music will be included with the appropriate Kickstarter tiers for people wanting that!
Work in progress:

HEART FRAGMENT HAS BEEN APPROVED ON STEAM

It took a little while but you can now add Heart Fragment to your Steam wishlist! This means when the full game is released you will be given the option to activate your game on Steam with a provided Steam key if you chose a tier on Kickstarter that includes a copy of the game. Be sure to check out the Steam store page here.

Steam requires a 2 week period of newly posted games in a "coming soon" state, but after those 2 weeks are finished you will be able to download the demo there as well.

Funding has reached 22% of our goal, with 21 days left in the campaign. Although there's definitely still a possibility of reaching our goal, the Kickstarter may sadly need to be redone with budget cuts. I still have a lot of hope that we can make it to our goal on time! I won't give up!
Work in progress:

We are more than halfway towards our funding goal on Kickstarter! 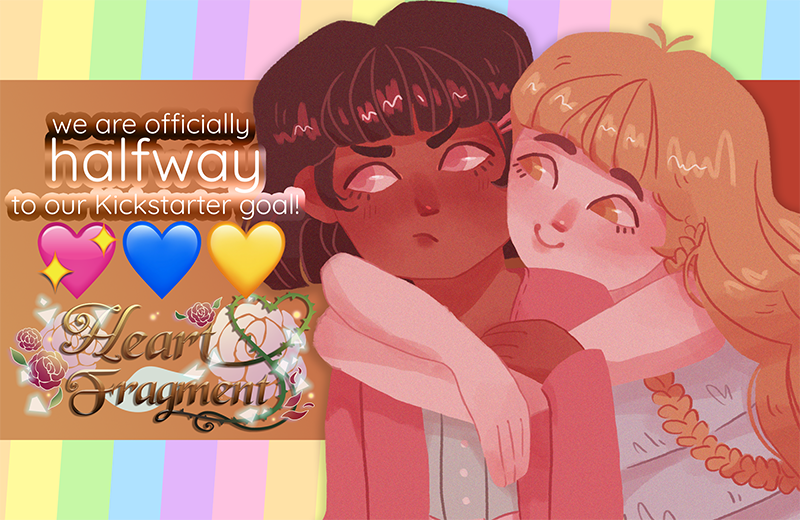 With only 14 days left to reach our goal, we're at almost 60% funding. This is wonderful news, and I'm extremely excited to announce that we've come so far! However, as Kickstarter is all or nothing, we need to keep pushing forward until we get to that 100% mark. If you haven't already, please check out the Kickstarter and consider backing us! And thank you so much to softquietbee on tumblr for doing the above artwork of Xani and Shannon! 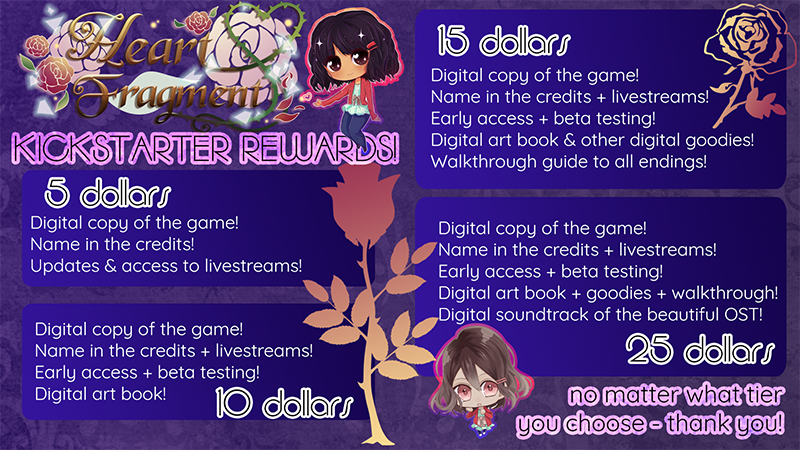 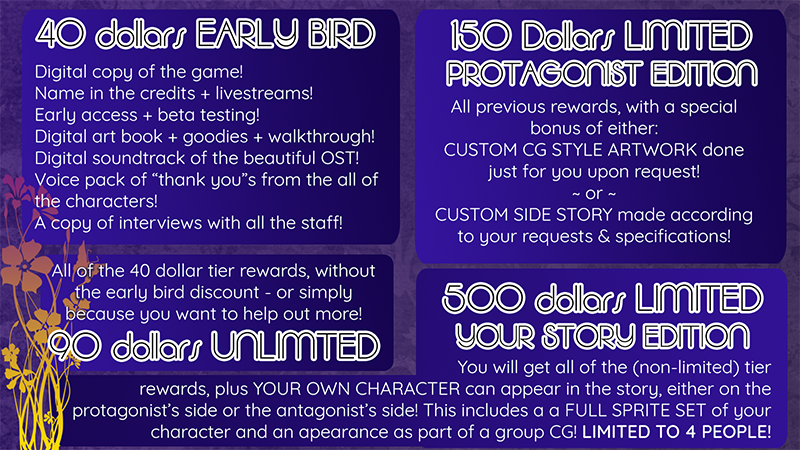 We have 12 more days left to reach our goal in the Heart Fragment Kickstarter campaign! It is all or nothing, so please help us out if you can! We are super close to our goal and just need a little more of a push to get there. Today we've got some art previews & a short, free side story that will allow you to spend one-on-one time with Kay & Clive! 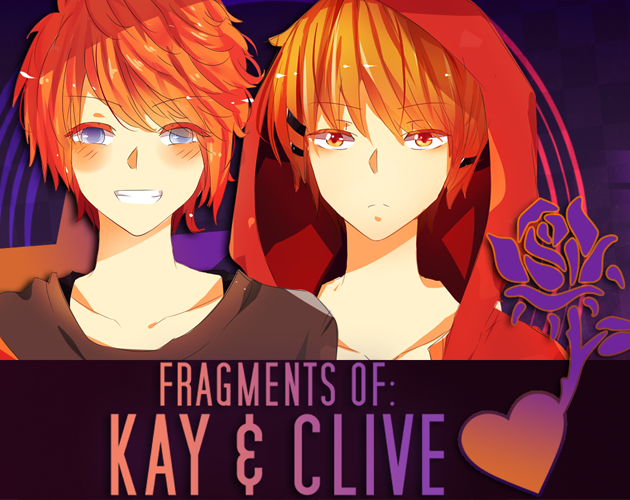 Curious about these boys? You can now get to know them a bit better in a free to download side story. Don't worry, side stories for the other characters are on the way soon too! Download on itchio now 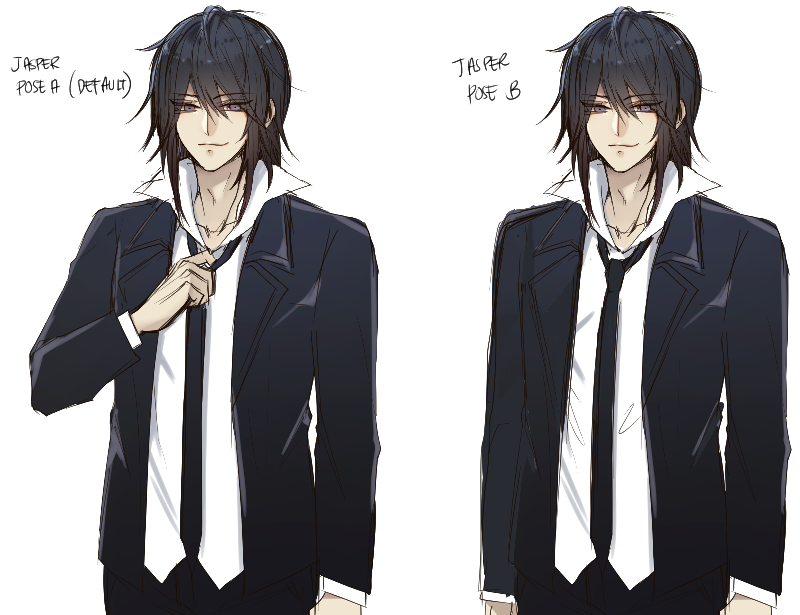 Here's a peek at the rough sketch & colors of the Jasper sprites! This handsome antagonist is waiting for you in the full game.~ 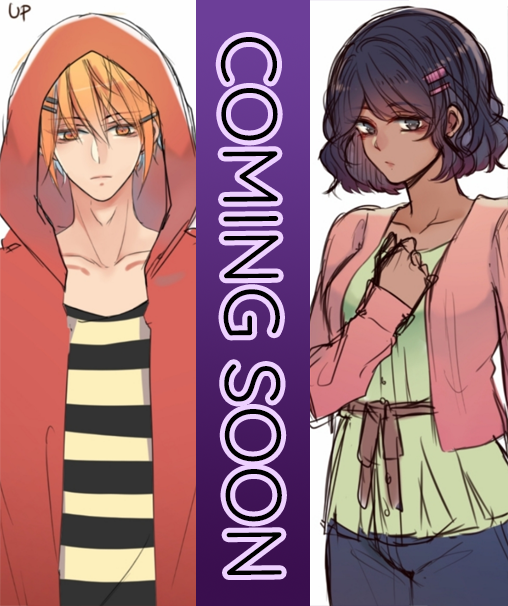 We also have a little look into some Xani and Clive art that'll be in the game. More art previews soon to come! 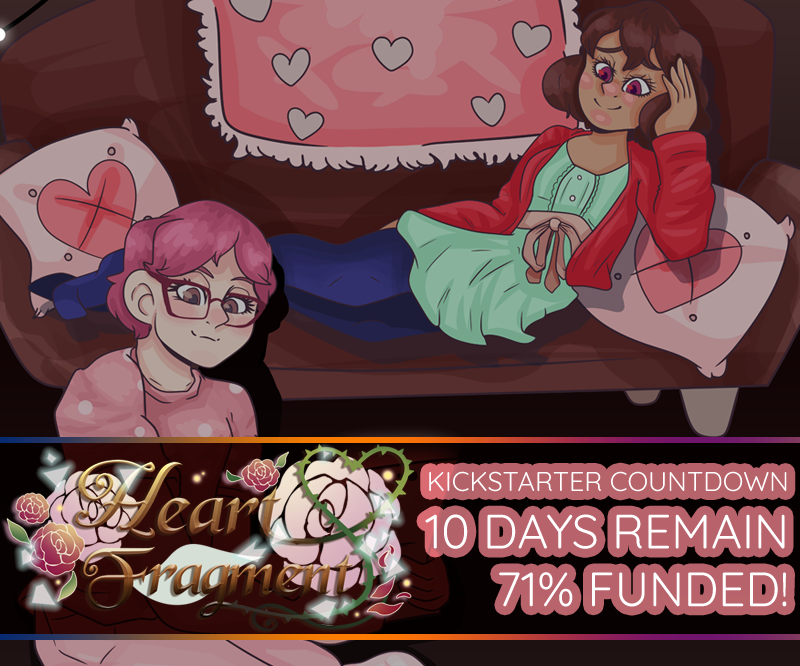 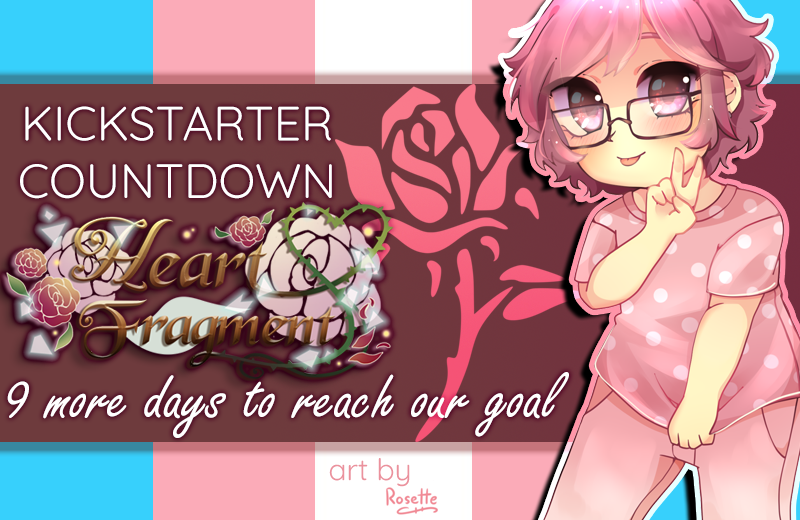 (day 10 art by stardoka on tumblr, day 9 art by rosellline on tumblr)

Additionally, because of the complex way that the endings in Heart Fragment will be set up in the final route, I wrote this up to explain it more clearly!

FINAL ROUTE ENDINGS
The way the endings in the final route will work is a bit complex! As noted in the endings list, you will be able to get romantic & platonic endings with most characters.

In the final route, who your “endgame” partner is will be up to you!

Each character will be featured in a section of the final route. At the end of each of their sections, you will be given a choice:

KISS THEM or HUG THEM

If you KISS THEM: You can select them as your endgame partner! You can kiss multiple characters and choose between them, but you’ll get bonus text for only kissing one!

If you HUG THEM: You can select them as your endgame BFF! You can hug multiple characters and choose between them with no “penalty” for hugging them all. 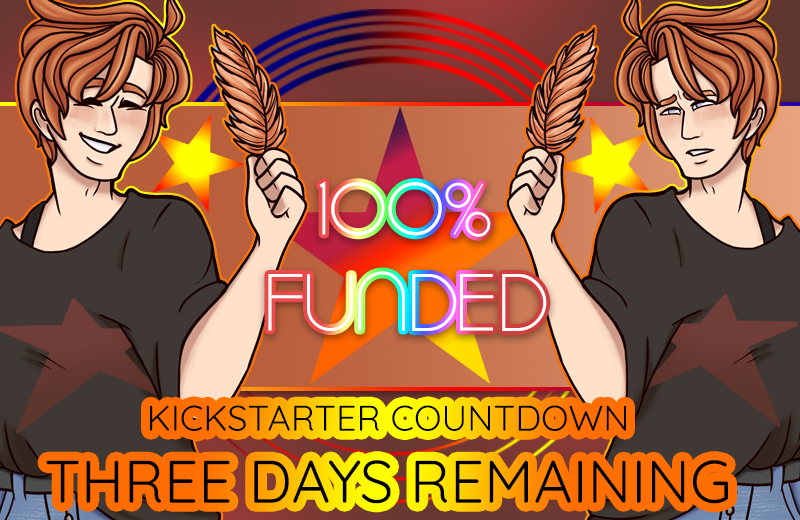 With just three days remaining, Heart Fragment has reached its goal!
To celebrate, here's the beautiful art that @razzle-reds-dazzles on tumblr did of Kay for us!

We did it, everyone!

We are officially fully funded with three days left in the campaign! This is incredible. I’m so proud of how much has been accomplished and I can’t even describe how exciting this is. Its been a long, anxiety-inducing journey but in the end, it paid off and I’m so glad for how well we’ve done.

Three days may not sound like much time but let’s keep pushing on towards our stretch goals! To recap:
This is the final stretch. I can't wait to show you all of the exciting things to come. Stay tuned!

I could have sworn I posted this already but somehow it seems I forgot to post the final results of Heart Fragment Kickstarter! 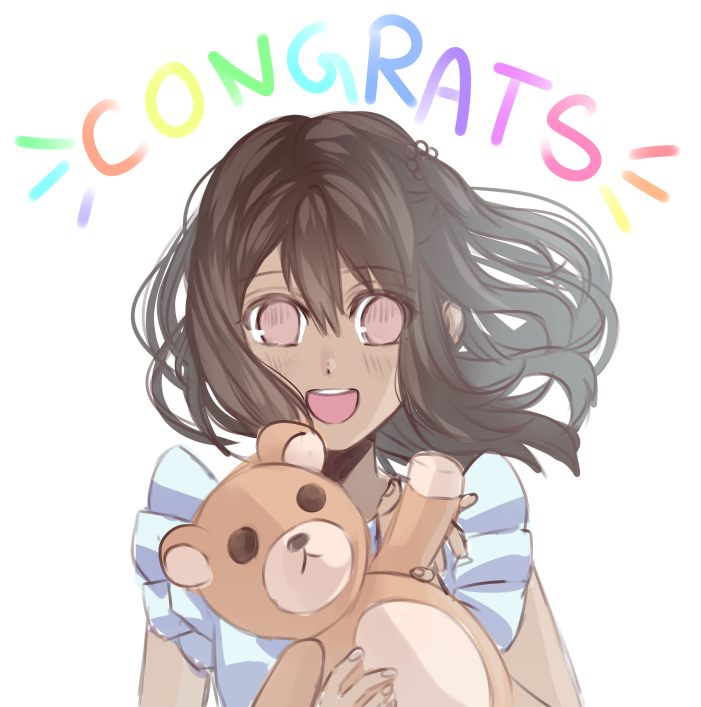 With an amazing show of support we managed to meet all the way up to our third stretch goal! So, not only is Heart Fragment going to be made, it'll also have extra content, an extra romantic+platonic route, and extra CGs!! The game's next demo update is going to be released in April/May along with a revamped GUI and a greatly expanded demo. The new demo will also implement the personality traits that you will be able to gain along your journey - a mix of positive and negative traits. Some bad endings (but not all) will require specific negative personality traits be activated to get them. For this reason I'm toying with the idea of making an EASY MODE and a HARD MODE. The easy mode will allow you to choose which personality traits to equip once you unlock them, while hard mode will lock them in once activated.

Additionally, the new social media feature that will allow you to check the protagonist's social media feed will be implemented with the new update as well! Checking the social media feed is optional, but I totally recommend it because there are some extra CGs that can only be unlocked there!

The voting for backers to choose the design for Natalia - the newly introduced route - is also being done right now.
Lavendel did some sketches for the design options. As the graphic below states, these are not the exact finalized designs or poses; they're to show the basics of each one. So far the voting has options C in the lead with 57 votes! Option A has 37 votes while B has 41. 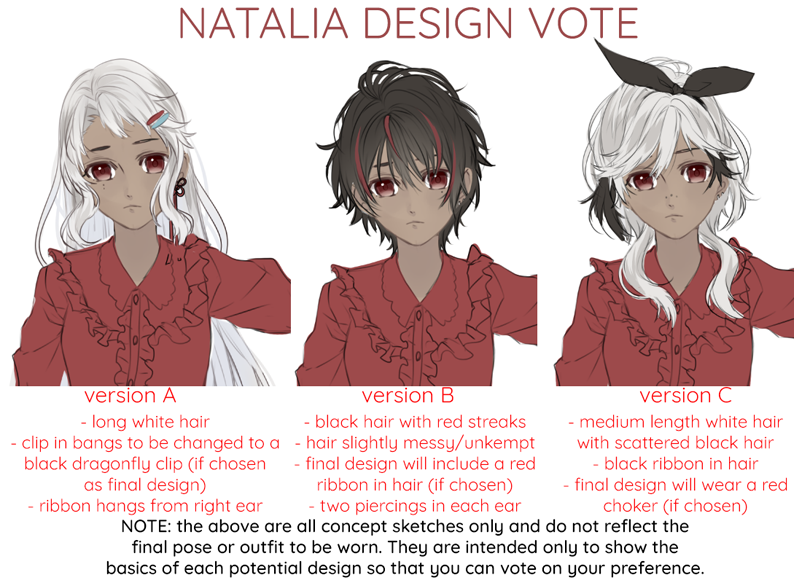 Lots of exciting progress is being made! Stay tuned!