A place for game announcements, and for people to discuss games being made.
Forum rules
Please read the sticky before creating a new topic. Linking to Kickstarter/Crowdfunded games requires a demo.
Post Reply
40 posts
Message
Author

Widdershins. Since you're the only one to reply thus far, I'll do you a solid and reveal both.

Here's Isven the orca and "Indi" the clownfish respectively, left to right! 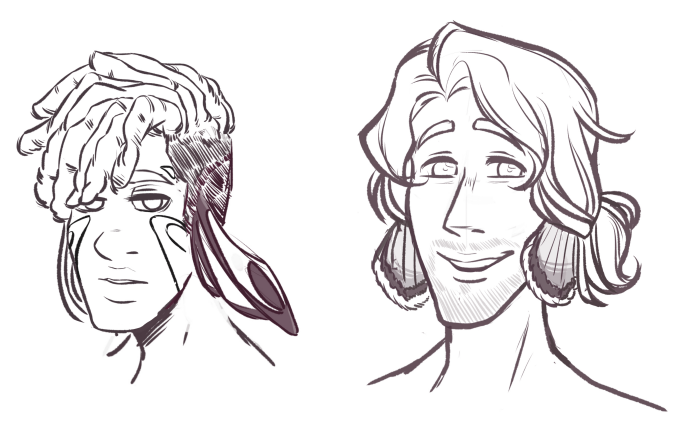 Thanks for your interest! Indi seems to be a favorite amongst my friends and the artist herself!

W-well! In any case~ some updates from me!

I started adding music! It would be cool if I could commission it but for now, I'm going the CC route.
I've also added image buttons to the text box aaaand a notification bell sound every time an encyclopedia entry is unlocked.

A bunch of things got re-written but I'm still staying pretty tight lipped on the plots so I can't say much about that.

Soh's route is trudging along--and I do mean trudging because I've been way busy lately, mainly working on another writing commission--but I might be able to get his route will be finished this month and at the worst, next month.

Officially, Nova is the only one without clean line art--however, we're doing expressions before colors so it might be a while yet before a full on sprite-by-sprite art reveal. :B

It's great there is already such distinct visual variety, prior to colors being added in; the characters are incredibly expressive, too, giving a strong sense of each personality. Well done, you and artist both!

It sounds like you're progressing at a good clip, overall-- especially if you anticipate finishing a sticky route during such a busy month! Looking forward to future updates.
Top

Wait until you see what they wear.

It's been a while since I updated the thread so I just wanted to pop in with some great news!

1. Ocean Pearls is OFFICIALLY.... 50% complete! What that basically means is that of the five routes, now 2.5 are done! Soh's route is chugging along, though it's not finished as quickly as I would've liked. I hit some writer's block but that's been conquered and dealt with :'D

2. 14 out of 15 sprites are completed their expressions line art! That said, I'm now seeking a colorist! See the first post of this thread for details. If you have any questions, feel free to PM me for more details.

I've been considering releasing route by route but I haven't quite decided because it kind of depends on if I can hire a colorist sometime soon... We'll see! ^o^

...That's right, Lemos and Isven have been added to the first post! Here's some full body close ups! 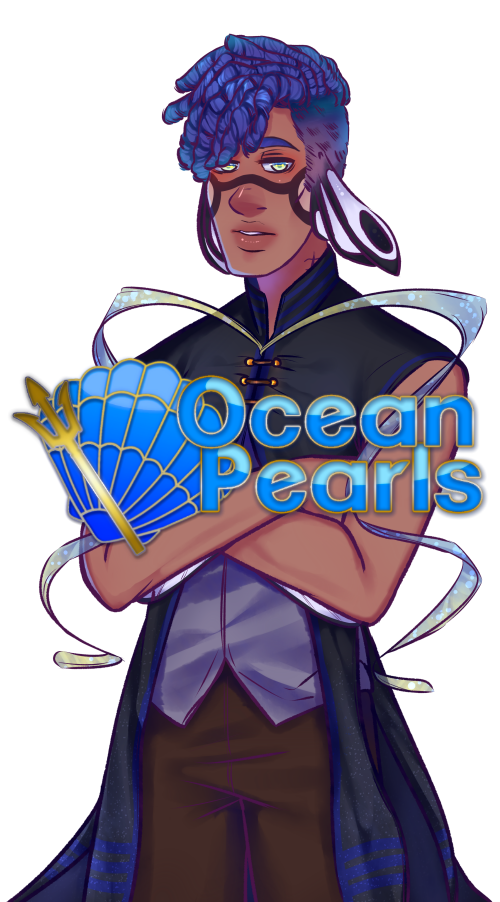 I've also got some interviews coming... Here's parts 1 - 3 of "Meet Lemos", a small series of tweets I did so to help players get to know the kings! 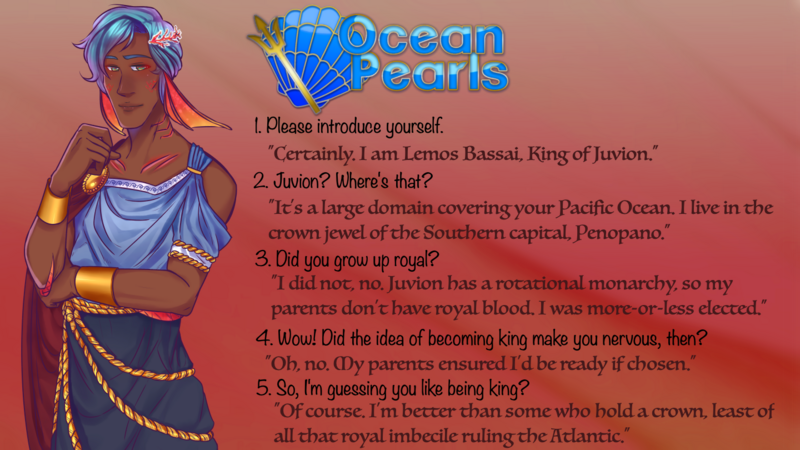 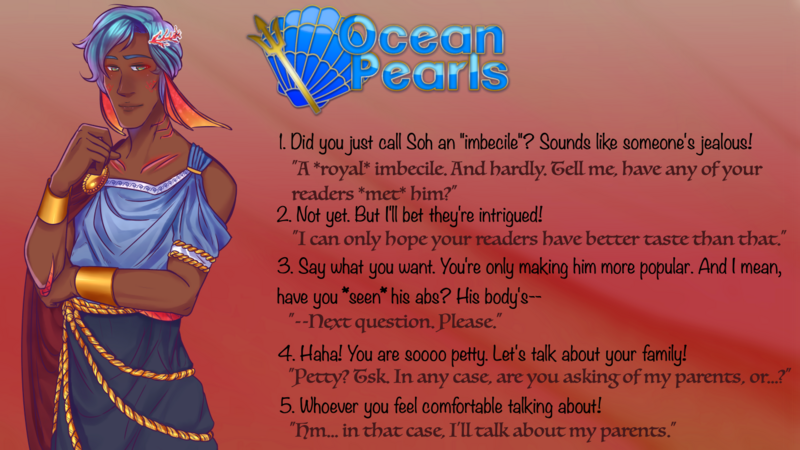 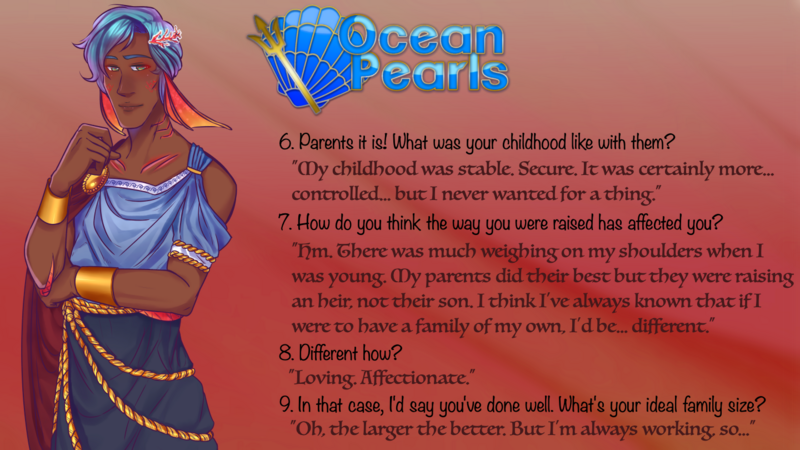 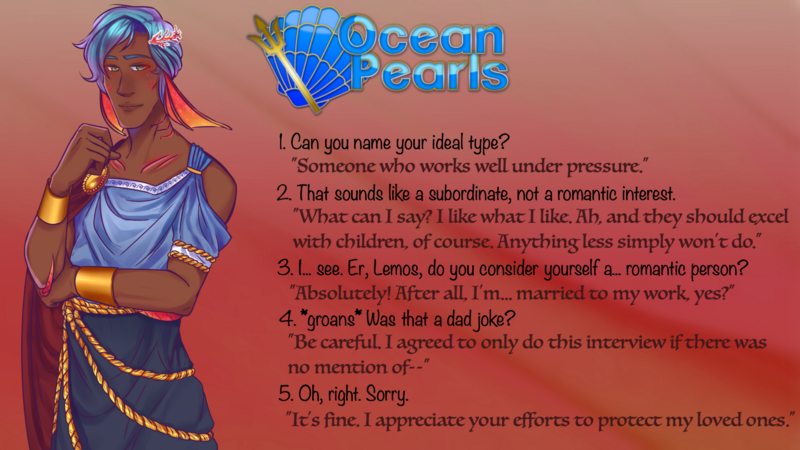 Hope you enjoyed this update!

Here I am, rolling in hot with an update!

Basically, there is more art, but I can't reveal it yet. Side characters for Lemos' route are D-O-N-E!

Indi is complete but he's getting his hair tweaked just a bit! We're waiting on Soh and our final, secret love interest who, after much thought and deliberation, I've decided not to reveal before the game is released. :'D

That being said, I've also got an update in the form of a part 1 (of 3) interview with Isven! 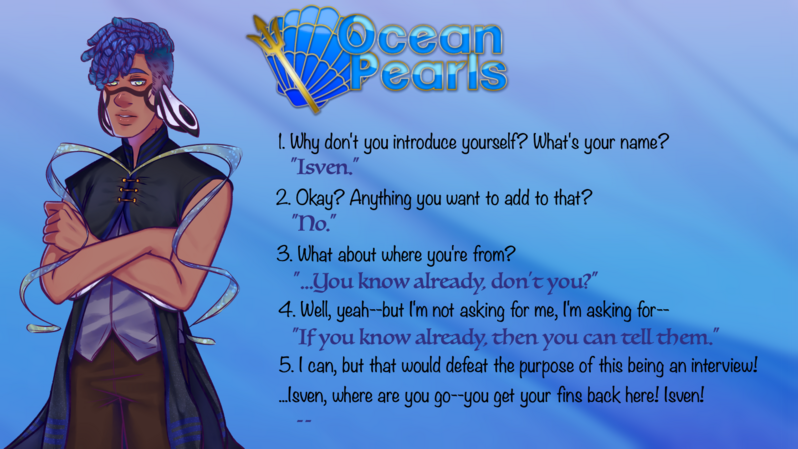 I forgot to post about it here, but better late than never. OP is going to be on hiatus, as I've run into some financial difficulties. I'll re-open the thread once progress can be made again.

Thank you as always for your silent support. :^)

Can't wait to see more about this! I hope you're able to continue working on it soon c:
Can I just say I love love love Lemos' gills...

Have you found a colorist?
Top

Huebear. I did, yes! An assistant colorist would be helpful, but unfortunately, this project is on hiatus due to financial difficulties. Thank you for your interest, however;;