A place for game announcements, and for people to discuss games being made.
Forum rules
Please read the sticky before creating a new topic. Linking to Kickstarter/Crowdfunded games requires a demo. Updates to Patreon-backed games may be posted once every 2 months. Adult content should not be posted in this forum.
Post Reply
12 posts • Page 1 of 1
Message
Author Mireille Maiorano is the daughter of a wealthy Italian family,
raised in an all girls' boarding school far away from the rest of society —
until her monotonous life is thrown into disarray after the unexpected death of her father.

Left with nowhere else to go, Mireille is sent to live with her uncle in France —
but the man who acts as her escort is the worst person imaginable for such a delicate job.
Lyon is a tactless, careless Frenchman who only seems to care about telling stupid jokes and seducing older women,
and Mireille hates him with every inch of her being.

At least, she would. She wants to. But life isn't always that simple. Mireille:
Mireille Maiorano is a young girl with a somewhat awkward personality.
She recently turned eighteen, but feels uncomfortable with her newfound status as an ‘adult,’
and finds the thought of adulthood, and the responsibilities that go with it, frightening.

Having spent such a large amount of time in an all girls’ boarding school,
she is uncomfortable around men, and often acts aggressively towards Lyon — even when she wishes she wouldn’t. Lyon:
Lyon is a relaxed and laid-back man who doesn’t seem to understand the meaning of the word ‘silence.’
He’s always chattering on about something or another, whether Mireille wants him to or not. He’s also a reprehensible ladies’ man,
with an inexplicable passion for housewives — chiefly, well-endowed, vaguely depressed housewives.

Nevertheless, he does seem to genuinely care for Mireille, and is even capable of coaxing smiles out of her, from time to time. 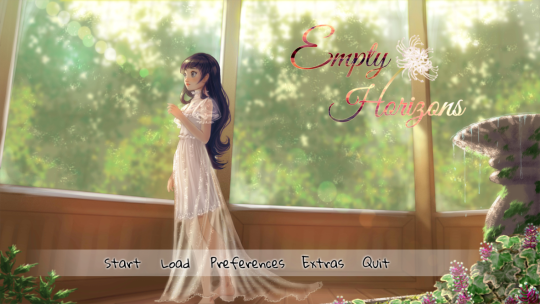 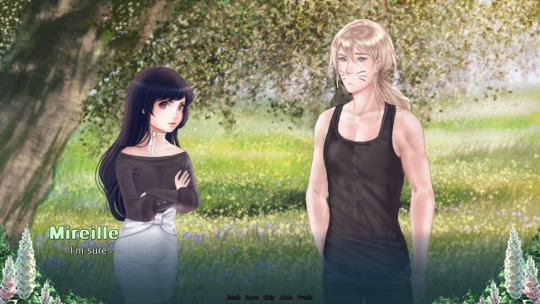 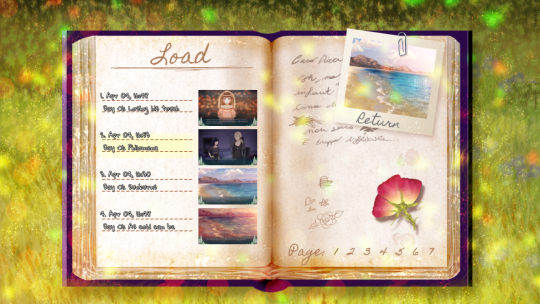 This VN is now on Steam! It can be purchased for $2.99, with a 10% discount on launch~
I'll upload it to itch.io at some point soon, too.
Thank you for everybody who voted on Greenlight, and I hope you enjoy it, if you decide to check it out!
Last edited by ebi-hime on Tue Jul 19, 2016 2:59 pm, edited 1 time in total.
I have a lot of free & commercial VNs available on Steam and itchio.io if you want to check them out! ☆
Top

The premise sounds very interesting, and the art is lovely and matches what we can expect from such a synopsys ! It looks like a very sweet game, I'm very much in love with the GUI! It's beautiful! The whole game (plot/art/music) is very nice from what we can see! (Though I wonder why Frenchmen are always depicted as either rude or flirtarious XD it looks like a conspiracy...or the truth? ='D )

I have a few questions if you don't mind? Do you know how many ends there will be? Any idea on the final number of choices? The length of a gameplay? (Sorry it sounds like a questioning ><).
Anyway, definitely voted for you on Greenlight, though I'll be honest: please consider making it a bit more expensive than $2.99, it'd feel rude paying this low for such a game! (I guess on itch we will be able to pay more if we want/can?)

Good luck on finishing it (if it's not done already, since it's not written anywhere) and on promoting it! I hope you'll make it to Steam!

Thank you for your comments! u///u
Yeah, Selly's art is so pretty... I am in awe of it o'A'o
The GUI is one of my favourite things about it, it all looks so nice and cohesive...
As for the Frenchman thing, idk... It's such a common stereotype though XD;
Well, I have another VN set in France, w a male French protag, who isn't a flirt!

I do know how many ends there are, and how many choices, but saying so might spoil some elements of the story haha...
It's 45k words (thereabouts), so length of gameplay depends on how long it would take you to read that much text.
I think for most people it might be around 3 hours, but I'm not sure.

I'd feel bad charging more since it is pretty short... And I think people would complain XD; But I might think about it...

Oh, and the whole thing is actually already finished, so you don't need to worry about whether it will get done or not.

Again, thank you very much!
I have a lot of free & commercial VNs available on Steam and itchio.io if you want to check them out! ☆
Top

@Ebi-Hime:
Actually the whole game seem very cohesive, that's really impressive: most of the time, the GUi doesn't match the art (sprite/BG), but from the screenshots you've showed, it seems really neat! Top-notch quality!
Haha, downloaded you other game, it's interesting when characters have a nationality (it's also interesting when they don't of course, but it seems more common), it feels like "they exist in a world we know" X)

Oh, okay, then let's say there are "enough choices" and "enough endings" for everything to be fine, for the plot to come to an end and the player to be happy

And now I'm left making assumptions and theories about it, haha XD
Well, I can understand why you wouldn't want to charge more, though I'll definitely find a way to pay more then

That's great!! Congratulations on finishing the game then, can't wait to see it greenlit (finger crossed!)

This looks lovely! I love the art. It's very soft and charming. Voted for you. Good luck~
Website - Tumblr - Facebook

@ Didules
All the art was done by the same artist, including BGs and GUI, so maybe that's why. I think having every single aspect of the art done by one person can make the whole project look more unified... But it's not always possible, since some artists only prefer to draw one specific thing.
Selly is very versatile, I'm honoured I was able to work with her on so many projects u///u

Actually, there are not many choices in this VN at all. It's verging on being a kinetic novel, but it's not quite.
The way the branching aspect is implemented might be a bit unusual.

@ KittyWills
Thank you! Yeah, Selly's artwork is so nice. Her DA gallery is similarly filled with soft and charming pieces, if you want to poke through it XD;
I have a lot of free & commercial VNs available on Steam and itchio.io if you want to check them out! ☆
Top

Check it out by clicking on the siggy above!
Top

It all looks so lovely and soft! The art style is gorgeous! I can't wait to play it and get more into the story

@ hoihoisoi & FrozenApple66
Thank you! Yeah, Selly's artwork is so nice. I'm a big fan of it too u///u
I always worry my writing style can't measure up orz

Actually, if you like the artwork, you could check out Emmeline Burns, which is a free VN that also uses Selly's art, that I wrote.
Additionally, the musician is the same person who composed some of the tracks for EH, so it was made with the same team of people.
The writing style in Emmy is quite different to EH, though... But I love my convoluted similes no matter what style I'm writing in XD;
I have a lot of free & commercial VNs available on Steam and itchio.io if you want to check them out! ☆
Top

Nice to see a new game by you =D. I'm excited to see another otome. This looks really good and the art is beautiful. I'll play it along with World Unknown =D. Good luck with everything. Oh and I voted you guys up on Steam. We need more otome games on there =D.
Please support my Twitter, Tumblr and Patreon @ infel
Thank you!
I wonder how otome it is, since the core cast is comprised solely of 2 characters, but... I guess being GxB kiiind of counts XD;
I have a lot of free & commercial VNs available on Steam and itchio.io if you want to check them out! ☆
Top

bumping to say the VN is complete now~
I have a lot of free & commercial VNs available on Steam and itchio.io if you want to check them out! ☆
Top
Post Reply
12 posts • Page 1 of 1