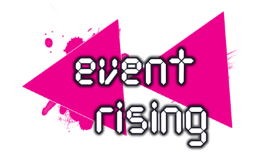 this will be a commercial game
---
Hi all ! We're Otomeido Studio, and we're trying our hand at our second game. Our first game, Cadaver Clicker, is on hold right now. Until then, we've started a new project called Event Rising !

Event Rising is a Visual Novel with 18 unique routes. 18 routes, because we have 18 playable characters, each with their own path that is 100% different from any of the others. Each path will have it's own unique CGs, events, and deaths. We have 70+ CGs planned out for this game already, plus any we choose to add in later. We're approximating about 25k words PER PATH, so this game will definitely be a long one.
Each route will have 2 endings, plus a few secret endings you can get, mid game. [/b]That's about 40 different endings[/b].

The gameplay/story is set up like the game of "Werewolf." The game elects one character as the Corrupt, who can either win the game by killing off everyone, or lose the game by being revealed as the Corrupt and being eliminated. The chosen person has to kill one character every night or else they lose he game. The other characters are also given titles and have special skills to help figure it out, as well. ​Each route will have a different elected killer, and everyone's assigned roles will be different.
---
Our game starts out in a school, but branches to having an entire city open to explore. The beach, your dorms, a shopping district, cafes, parks, and more. You'll be able to explore all of these as any of our 18 eligible characters to hunt for clues, find dead bodies, and even have some light hearted conversations with friends. Unfortunately, though, you're trapped in this city. There is no way out, and every time you try to walk along the only road out of town, you somehow end up walking right back. Something's not right here.

All you have on you is a cell phone that was given to you by the "game master," the person keeping you in this messed up city. You can use it to communicate with characters not in the immediate area, and learn some trivia on them as well. Plus some other, more secret, functions.
--
The Otomeido Team

Taiyoukai (Princeton) is the one coming up with ideas and pretending like they're being useful. They use the title "director" but "executive nap taker" works just as well. Oh - and they do all of the programming.
Dollcult (Reine) is the lead artist doing all of the CGs, GUI, and character sprites. She often whips Princeton into shape so they work. Works almost exclusively while listening to Let's Plays and creepypasta.
Pomeloprince (Vic) - u/c BGs
foolserrant (James) - u/c Writing 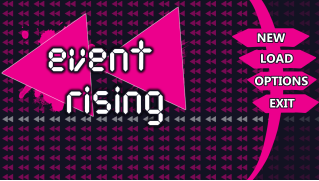 Here are our current main screen (left) and options screen (right). (The sliders DO work, I just don't have the game on my computer to get a screencap of that.) As you can see, the main colours of this game are a navy blue, and this bright fuchsia. All of the character sprites are lined in this blue, as well. The art direction is more pop with saturated colours. The dark colours are darker, while the bright ones are brighter. 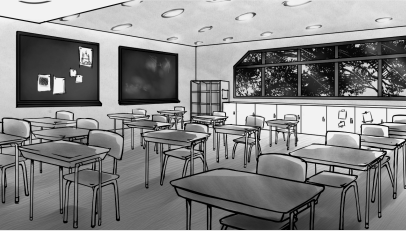 Our backgrounds are being done by Pomeloprince and we've decided to go with a completely monochrome setting. 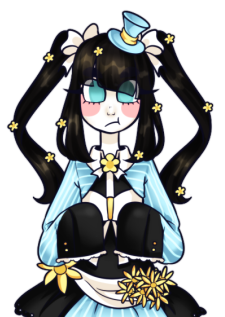 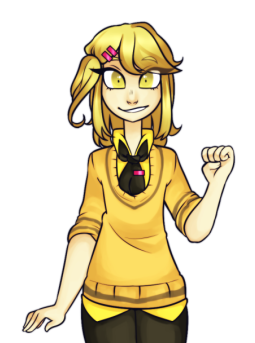 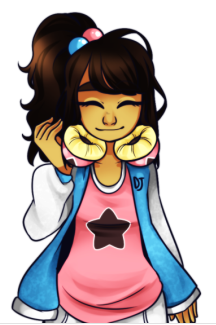 Here are a few of the characters who's sprites I've finished already. There will be 3 poses for each, character and a wide array of emotions as well. Some even will have costume changes. 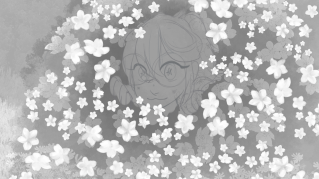 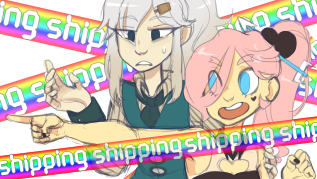 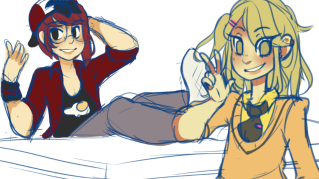 Cgs are currently in the works, but the only ones finished are the ending ones for the demo we're going to be releasing soon !
--
questions
1.) Are you interested in this game ? Why, or why not ?
2.) Does a game with completely different scenarios and multiple playable characters intimidate you, or would it make you want to play most of them (at least) ?
3.) Any suggestions/questions for us ?
Last edited by otomeido on Wed Jul 06, 2016 4:53 pm, edited 2 times in total.
Top

1.) Are you interested in this game ? Why, or why not ?
Absolutely! The lovely art style, interesting story, cute characters, and large number of different routes makes me super excited for this game. Also, I really enjoy the murder mystery genre, so I can never get enough of games like this.

2.) Does a game with completely different scenarios and multiple playable characters intimidate you, or would it make you want to play most of them (at least) ?
I've never played a game with so many playable characters, but I think that makes me even more interested in it! Especially since they all have different and unique scenarios and routes. I like to try and complete everything when it comes to VN games, so I'd definitely try and play all the routes that the game offered.

3.) Any suggestions/questions for us ?
I don't have any yet, but it is still early on lol. This looks games looks super promising, so great job so far! I can't wait to see what happens in the future!
Top

♥ Thank you very much !
Top

1.) Are you interested in this game ? Why, or why not ? Yup, it looks cool!
2.) Does a game with completely different scenarios and multiple playable characters intimidate you, or would it make you want to play most of them (at least) ? I absolutely LOVE seeing things with different points of view, so this is right up my alley.
3.) Any suggestions/questions for us ? Not at the moment! c:
hey hey I made a thing
Top
Post Reply
6 posts • Page 1 of 1