A place for game announcements, and for people to discuss games being made.
Forum rules
Please read the sticky before creating a new topic. Linking to Kickstarter/Crowdfunded games requires a demo.
Post Reply
61 posts
Message
Author

Here are all the side characters for Cinderella Phenomenon! All of them has their own backstories so we hope you'll like their stories. September is almost here and we're doing our best to finish the demo soon! XD

Huh, Emelaigne sort of reminds me of Gold. cx And Genaro Britton III would be Howard Stark if you took away the beard.

Based purely on appearance, Mythros, Parfait, Jurian, and Garlan are the ones that I'm most interested in learning about. Will every character appear in every route, or will most of them appear only in one?
hey hey I made a thing
Top

Zelan wrote:Huh, Emelaigne sort of reminds me of Gold. cx And Genaro Britton III would be Howard Stark if you took away the beard.

Based purely on appearance, Mythros, Parfait, Jurian, and Garlan are the ones that I'm most interested in learning about. Will every character appear in every route, or will most of them appear only in one?

Probably because of her blonde hair? QvQ
And oh my. Howard Stark XD

And yes, all of them (except for Bria) will appear in all the routes and you'll get to know each of them in a specific route. Hopefully you'll enjoy their stories XD

When I saw Mythros I was like "That's Sebastian Michaelis from Black butler."

I'm in LOVE!
There are so many girls! Delora looks really stunning!
Top

Hey guys! If you've been following our tumblr, then you would have known that I managed to work on the GUI this week. I'm almost done with it and I'm in the middle of coding Chapter 1. 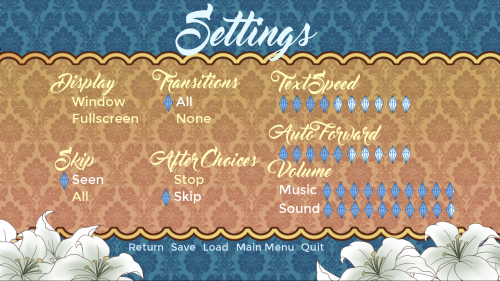 And here's my personal favorite that I just finished last night! X)

I can see why the name choice GUI is your favorite, it's amazing! ^_^ All of it is great, though, it really fits with the story and the rest of the art assets.
hey hey I made a thing
Top

Zelan wrote:I can see why the name choice GUI is your favorite, it's amazing! ^_^ All of it is great, though, it really fits with the story and the rest of the art assets.

Thank you so much! We're glad that you think so!

Since the demo will be out next week, here’s a sneak peek of some of Cinderella Phenomenon’s CGs.

Yes, Waltz appears as a kid in the story (at least until his curse is broken).

We are now polishing the demo for any errors/bugs but otherwise, demo is almost complete.

We’re all doing our best to make this a high quality free game so we hope that you’ll all support us and let us know what you think.

I am waiting for the demo. I want to be patient, but I can't seem to do it. XD Everything looks amazing!

try10 wrote:I am waiting for the demo. I want to be patient, but I can't seem to do it. XD Everything looks amazing!

Hiya! The demo is already complete. We're just going through it again and making sure that we haven't missed any errors/typos. We will post the demo here soon!

Thank you for patiently waiting. :3

DEMO IS FINALLY OUT EVERYONE! Please give it a try and let us know what you think.

Hi everyone!
We finally launched our kickstarter page! If you can't pledge, perhaps help us spread the word instead? We'd really appreciate it if you will.

Also, Please vote for us on Greenlight as well. I’ve just finished playing the demo and I have to say I was a bit surprised: this is the very first time that I find myself feeling so much sympathy for a main character. Thanks to her thoughts about her childhood and her flashbacks I think the player can understands how what she is now is deeply influenced by the way her mother raised her, and how her father treated her after his first wife loss. Now, I do know that the demo can only shows us a little bit of the plot, but for now the main character is my favourite character in the game

I do also like Karma, Waltz and Fritz while I’m still deciding if I like Rod or not. Who for now I don’t really like is the king, he seem to me that kind of parent who turn his back when things get complicated, even when it’s about his own daughter, but maybe playing the full game will make me change my mind about him. Anyway, the art is amazing, and the story truly captivating; I wish you much luck!
Top

Played through the demo and ahhhhhh, everything from the art to the writing is so amazing! I felt really sympathetic towards Lucette, perhaps a bit too sympathetic (but I'll get to that later)
As for your questions:
1. Yes, the plot interests me! I think it's one of those that sounds cliche, but when executed is actually quite engaging. I'm looking forwards to knowing the technicalities of each person's curse and I'm curious to see how Lucette develops as a character.
2. The art has improved, the sprites feel a little more...on model, perhaps? But what stands out to me is the improved writing! The pacing, especially.
3. I'm currently the most interested in Rod, solely because he's the only one who actively hates the protagonist lol
4.
Lucette might be a li~ttle bit too sympathetic. At least, I'd never call her wicked. She never did anything outside the scope of what I'd might expect a normal bratty teenager to do (eg. in her position, I'd resent and not want to get along with my stepfamily too, and it sounds mean but I would also fire a maid who I knew nothing about, except that she had damaged something precious to me.) So when Delora cast the curse on her, rather than automatically thinking "time for some character development!", my first thoughts were actually, "that's unfair and a bit ridiculous".
The result was I actually started feeling a little irritated towards Delora, Emelaigne etc. rather than agreeing with them about Lucette's behaviour. I think if Lucette was more openly vindictive/cruel/violent then perhaps I would agree with her getting the curse but for now the reason is a little unjustified and makes Delora seem like the bad guy.
Also, I'm just really hoping that you won't make Lucette kinder/squishier in order to be "good". I think too often in manga and books, cold/snobby people are written like something is wrong with them, and they need to "melt" in order to be fixed/become good. I'd love to see you develop Lucette's character without falling into that trope.

Whew, got that out there! Basically, I just really enjoyed the demo, and am super excited for the finished game! Good luck with your kickstarter!
Top
Post Reply
61 posts