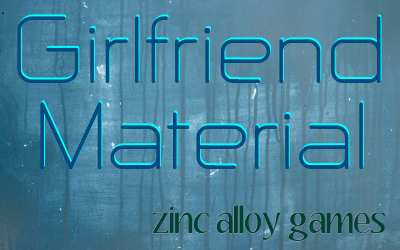 Girlfriend Material is the story of Lavinia von Adeline, an eccentric and socially anxious inventor who decides to rescue her love-life by building herself a robot girlfriend. The game is being written in Ren'py and is primarily a visual novel, with a time management and stat building component that controls the process of building the robot itself.

Lavinia is brilliant but socially awkward. Lavinia is confident in her scientific abilities, but as soon as she steps outside of her lab she is plagued by insecurities, and her discomfort makes her lash out in anger. Naturally this has done wonders for her social and love life.

An old ex-girlfriend from their shared university days. Jenny has found a more traditionally successful career path in the sciences, but her love life is plagued by poor decisions. She last saw Lavinia during their final break-up, when she told her that she's "just not girlfriend material, I guess".

Désirée works at Lavinia's favorite bakery/coffee shop, where she often escapes to self-medicate with heavily-frosted cupcakes. She works in the service industry, so she's friendly to everyone, even Lavinia.

A world-renowned researcher in her field, Eugenia had always held high hopes for her brilliant only daughter. She doesn't mean to meddle, but she can't help but worry. Above all, she just wants her daughter to be happy, in love, and tenured.

Peggy lives in the house next-door to Lavinia. She is retired, and either a widow or a divorcee, and at any rate has plenty of time to snoop into her neighbors' personal affairs.

Kasper is the cashier and clerk of his father's hardware store, where Lavinia frequently shops for parts for her many inventions. Mercifully, he had the good sense to stop hitting on her every time she came to the shop, when he found out she just doesn't lean that way. He does know his way around the shop, though, and will never hesitate to special order anything for Lavinia, provided it doesn't land him and his dad on some sort of watch list.

Made of sugar and spice and other nursery rhymes, Blueberry is sweet, gentle and adoring. Her model is defined by fawning devotion to her creator and girlfriend.

A highly polished model built to keep up with her creator's intellectual whims, she has a voracious curiosity for all things scientific. Defined by her refined taste and built around a sophisticated, perfectly logical mind.

Mysterious and slightly ethereal, she was pieced together from out of context quotes taken from works of classic literature and mythology. Her main motif is her independence and changeability, and she is designed to maintain her creator's high level of interest by her unpredictable nature.

I've been updating more regularly on the jam's dev log page, but here I am again with some early character art! I know the art is always something that people are eager to see.


The Girlfriend Material DEMO is up!