A place for game announcements, and for people to discuss games being made.
Forum rules
Please read the sticky before creating a new topic. Linking to Kickstarter/Crowdfunded games requires a demo. Updates to Patreon-backed games may be posted once every 2 months. Adult content should not be posted in this forum.
Post Reply
68 posts
Message
Author

I've got to say, though, I think I'm going to miss the placeholder sprites when they're gone...

Also, just looking through the game again, I noticed that Jake's sprite seems to be hovering a few pixels too high...
Top

ParrotWatcher wrote: ↑
Thu Sep 20, 2018 4:29 am
Also, just looking through the game again, I noticed that Jake's sprite seems to be hovering a few pixels too high...

You have a good eye. I thought I'd fixed this in the last game release (#10), but apparently I didn't quite fix it properly.

The first big thing is that Juan's sprite is done, and he's looking really hothappy. I've staged him into the game, but I'm not pushing a new game build at this time, because... ...I have a tentative schedule for all of the remaining sprite work for the game!
My goal is to release a final demo version of the game in either late November or early December, and get some beta testing on it. It won't have all of the sprites finished, but it should have most of them.
(Again, please let me know if you're interested in being an official beta tester.)

The current game release date is February 2019. The game will be free, but I'll have a bunch of extras that you can donate for (a soundtrack, wallpaper images, and a behind-the-scenes book). That date is subject to slippage (as seems to happen with my dates), but I'm really hoping to actually make this one, for personal reasons, plus it'll be exactly two years since this entire thing started.

Finally, I'm exploring the possibility (again) of an ending CG for each game route. SoulsoftEA is onboard to provide some fancy new shots of the guys, and with luck, the final game will have at least 4 CGs in it. Details on that to be shared as they happen.

(My OCD is begging him to face Adam, though...

But will he ever be as cute as he was in those first sprites?

And I saw on Twitter that you were thinking of changing his name. Carlos is pretty cute, but he doesn't really feel like a "Toni" to me...

I would certainly be interested. (And maybe you'll have Elliot and Nate by then...?)


bobconway wrote: ↑
Mon Oct 01, 2018 9:52 am
Finally, I'm exploring the possibility (again) of an ending CG for each game route. SoulsoftEA is onboard to provide some fancy new shots of the guys, and with luck, the final game will have at least 4 CGs in it. Details on that to be shared as they happen.

Sexy CGs? I guess that would require getting Chris's appearance sorted too, though, which might be too much...
Top

Stick figure-style sprites are, and will always be, a game option in Preferences. Oogle those stick figures to your heart's content.

Thanks for the opinion.

I didn't want to mention this here until it was more final, but yeah, I've gone through and renamed him Carlos. There were a lot of reasons why I wanted to make the change, and the only thing holding me back was the effort involved. But it turns out Notepad++'s find and replace across files is super powerful (and Scribus, which I'm using for the BTS book, stores its data as XML that is easily editable in a text editor), so I just went ahead and did it.

So yeah. Juan is now Carlos. I think it's a better name, and
means that three of the four main dateable guys no longer have "J" names
.

It'll probably break existing saves (because I just renamed everything, including game variables and filenames), but I guess that's not unreasonable for beta.

We'll have at least Elliot. Nate is one of the last sprites in the schedule, so it depends how behind we end up being.
I will send you a PM closer to the demo release date.


ParrotWatcher wrote: ↑
Mon Oct 01, 2018 3:52 pm
Sexy CGs? I guess that would require getting Chris's appearance sorted too, though, which might be too much...

Sexy, but not actual sex, precisely because I didn't want to deal with Chris. There's a preview in my tumblr that I won't link here because it's NSFW.

(That said, Chris as a character is already designed out for ZAGS, so I could have done it. But I'd rather get his sprite done before we start putting him into CGs.)

A lot has happened in the last two weeks!

I actually went ahead and pushed another game build, that isn't the final build I want to use for beta testing. Renaming Juan to Carlos and replacing his sprite just stacked up with a bunch of smaller changes, and I didn't want to wait on everything. Details are in the release post. 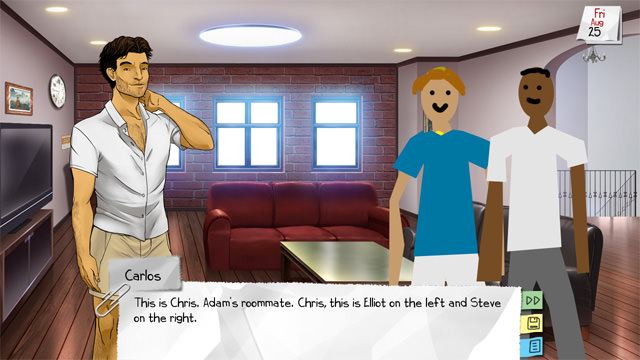 However! I'm aware of a bug in the latest release that causes you to lose some collectible items every time you view the screen showing all of your collectibles (even if you switch to it from another tab like achievements). I'm not going to fix that bug until the next build (after all, it is still a beta release), so beware if you download and play this one.

My CG artist (the amazing SoulsoftEA AKA illuminate001) has finished two of the CGs for the game, so now two routes have proper ending CGs. A preview of the latest one is on my tumblr, attached to the last fic I wrote (which I'm not linking directly for spoiler and NSFW reasons). 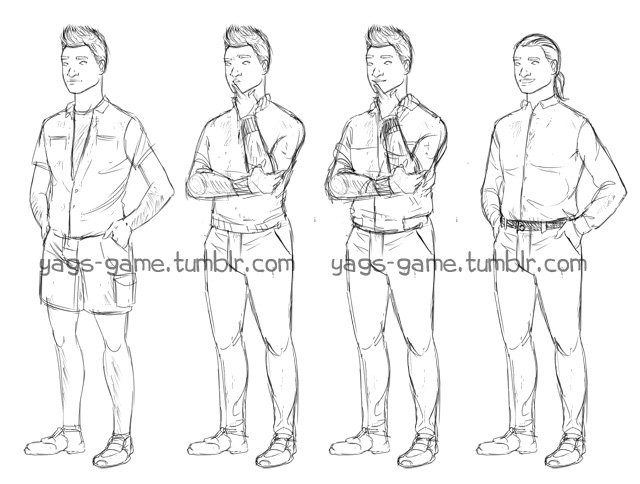 Another week and nothing to r...

Wait, no. I actually have updates!

Nikhil is done, as of this morning. He's looking awesome. He fits well into the game, as well. 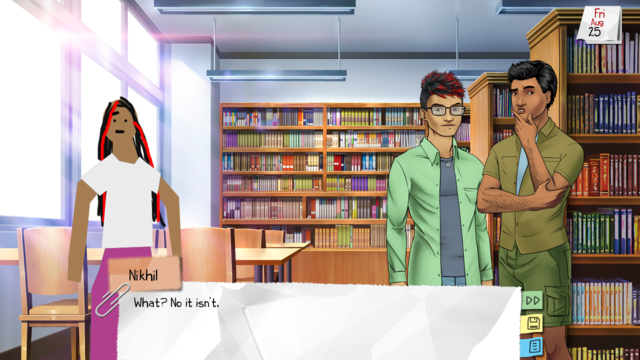 SoulsoftEA has started the final CG for the game, a preview of which can be found on my tumblr. I think it's the best CG yet, and am regretting not having planned for more. I guess there's always ZAGS for that.

Lastly, Hannah is now in progress! Here's her sketches next to Adam for scale. (He's canonically exactly a foot taller than her, so I like putting them next to each other.) 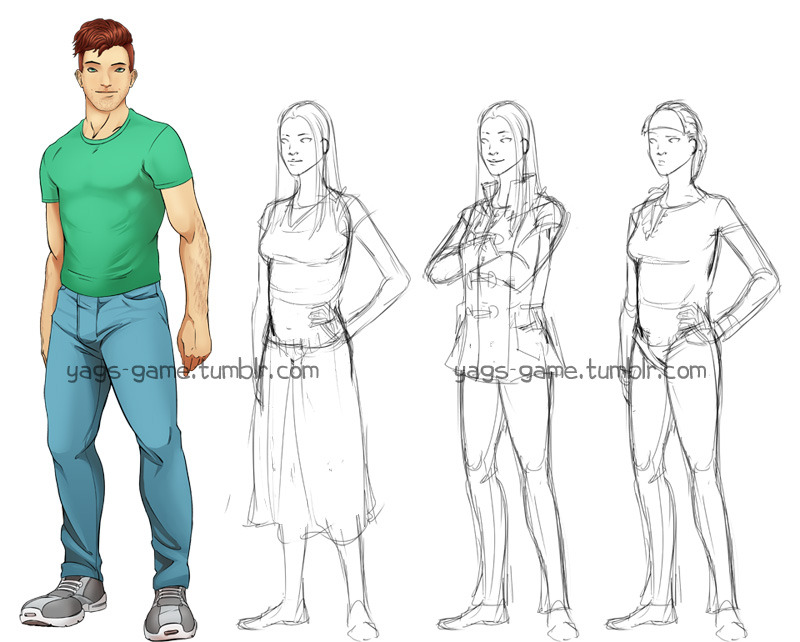 I'm declaring writing to actually be done now, and we're otherwise making great progress, on track for a February 2019 release.

Another week (or so), another sprite! Hannah has joined the brawl! She's the first female character, so it's nice to have a bit of gender variation in the (finished) cast. 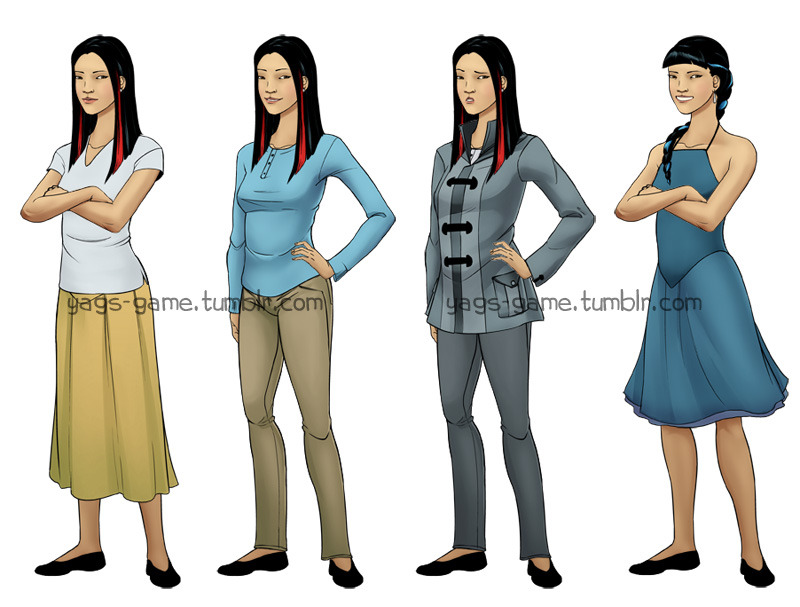 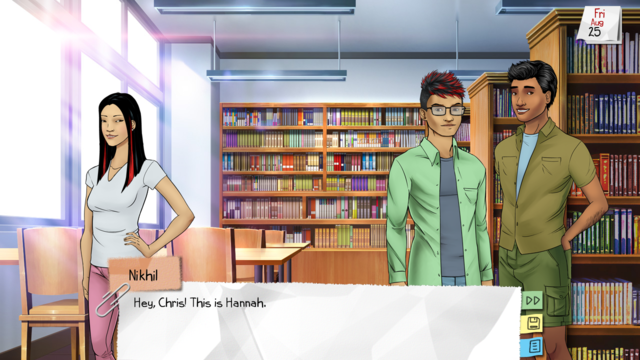 Elliot is also in progress. Here's a super early sketch of him. He's still going to change a bit. 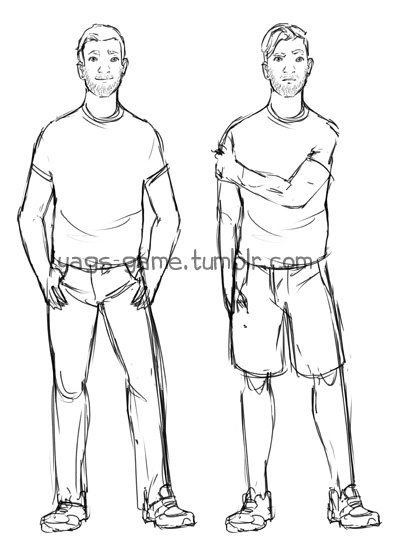 All of the CGs are also now finished and in the game, but you'll have to wait for the release to see them.

Wow, that's a lot of progress lately! YAGS is turning into a real game, OMG they grow up so fast!
Do you like BL games? Then join Ertal Games' Discord!
https://discord.gg/ZUFsg9v
Top

A bit of a mid-week update, but Elliot is done! 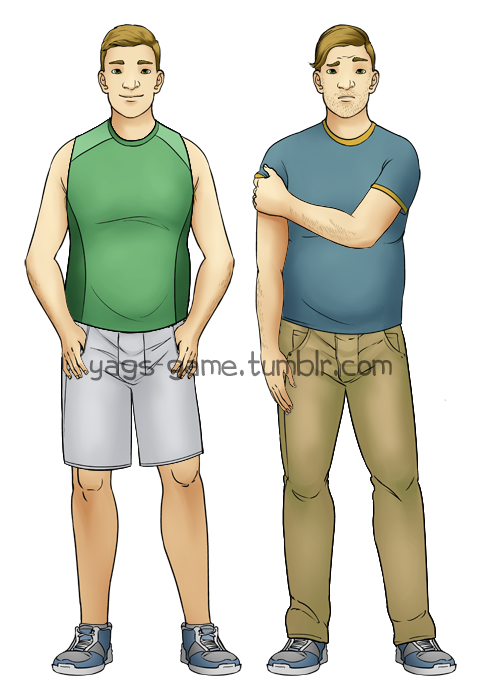 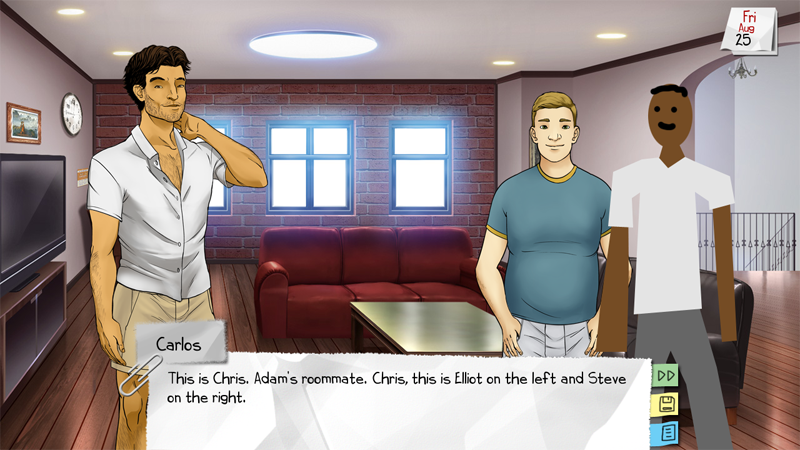 But more importantly, I wanted to share some amazing fanart I received this past week.

First up is this piece of art that perfectly captures the current beta state of the game, by SoulsoftEA (aka illuminate001), featuring Adam with stick-figure Steve and Elliot. 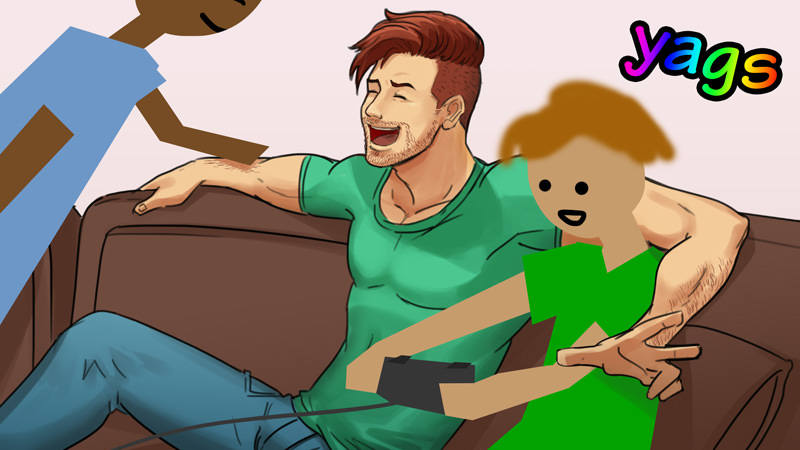 Second is this amazing chibi Adam by Wolfscade. 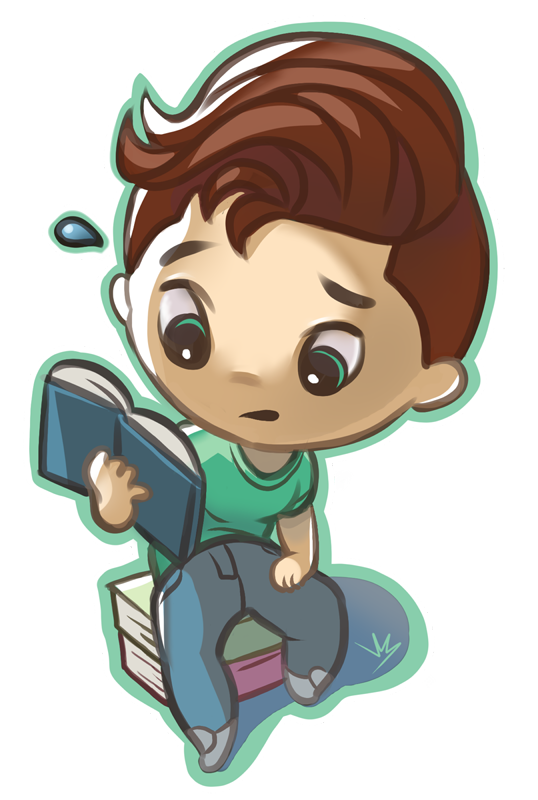 You guys are amazing and I'm so appreciative of the work put into these.

Sprites are still on track for a late-January final game release, so I'm establishing a beta testing release goal of December 8.
Based on the current sprite schedule, that'll get a game build with final sprites for everyone except Steve, Robert, and the twins, and with a pencil version of Liz G.

If you're interested in helping with the beta, and I haven't messaged you about it yet, please send me a PM.

We have some more sprite progress, going into Thanksgiving!

Liz B. has been inked, and will be rendered by early next week. 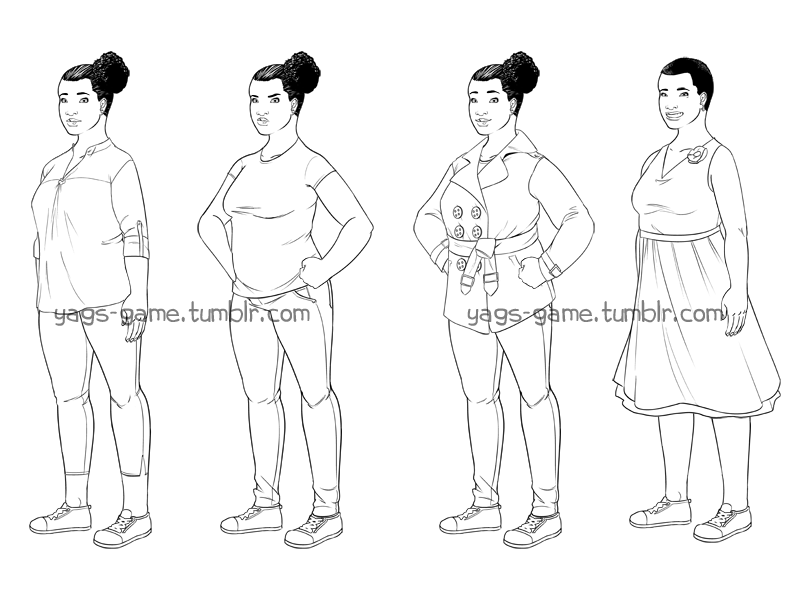 Nate has been sketched and will be inked throughout next week: 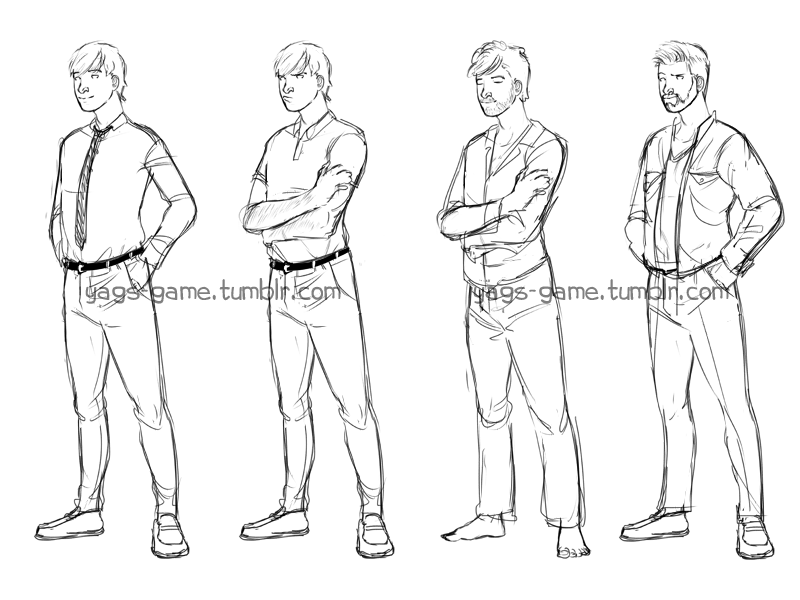 We're on track for our beta goal of December 8, although I may need to kick that by a few days for the final music tracks.

There's also a poll on my Twitter about what body hair toggling should affect. Opinions are appreciated (via whatever means, if you don't have a Twitter account).
https://twitter.com/bobcgames/status/10 ... 0507676672

On track for the beta!

First off, all the music for the game is done! It's plugged in, and looping properly, and we're all set to go there. 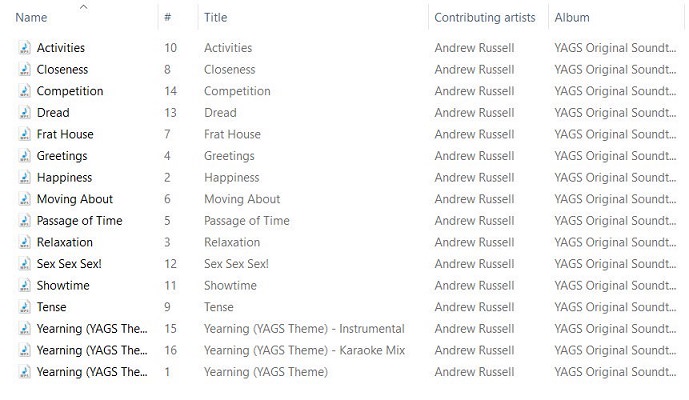 Sprites are also making progress as expected. Nate inks are in: 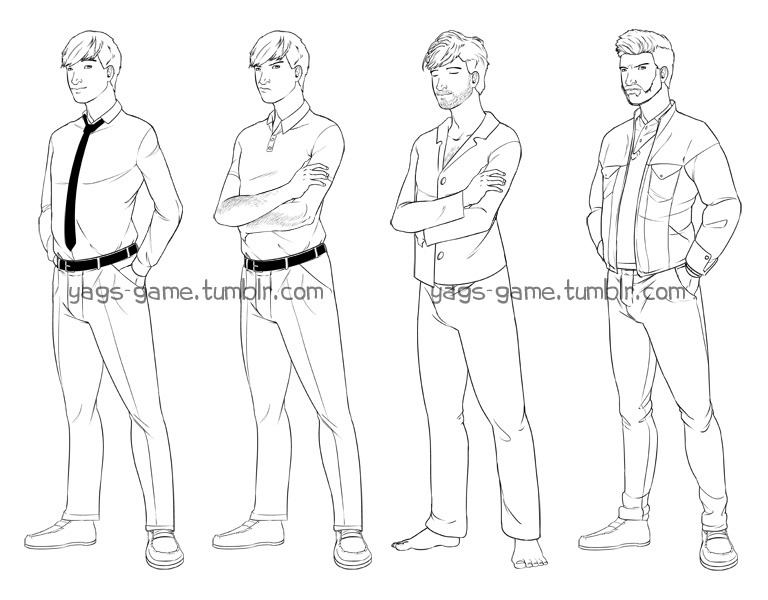 Liz B. is also done and in the game: 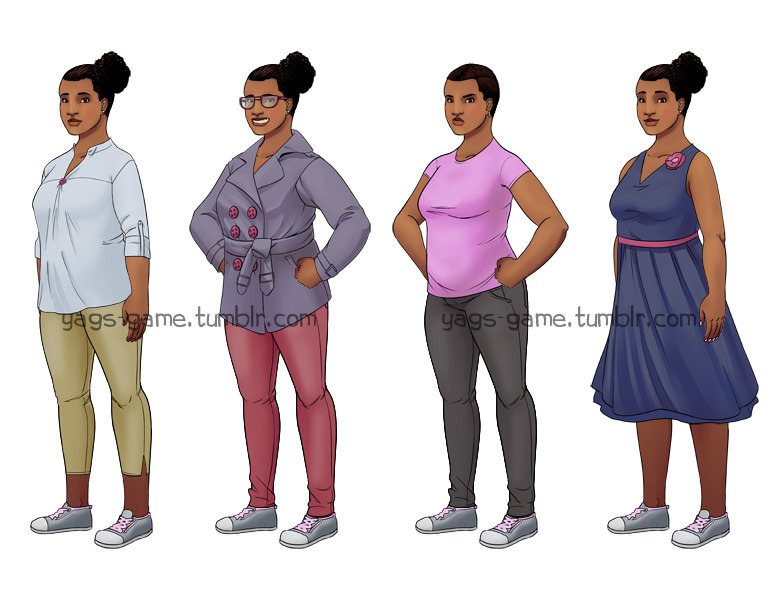 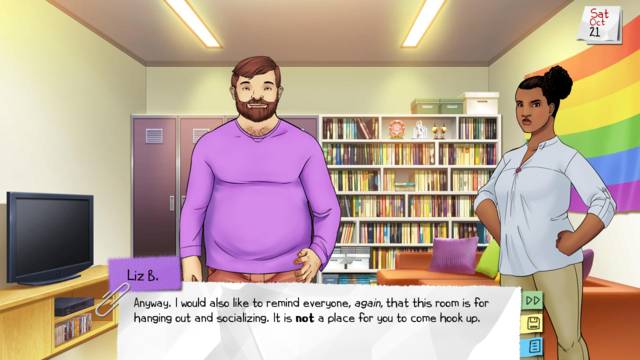 By this time next week, I should have a final Nate and Liz G. pencils, at least, and will be ready to push out the beta build. So exciting to see things really coming together!

Progress! Ahhhh! Look at all the progresssss!!!!

Nate is done and in the game! Liz G. inks are done, and she's also in the game. And the YAGS beta is now out! 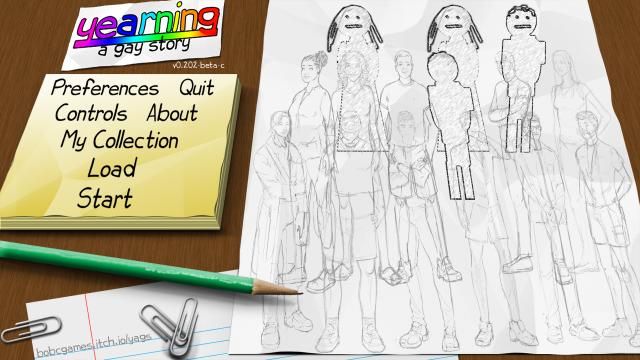 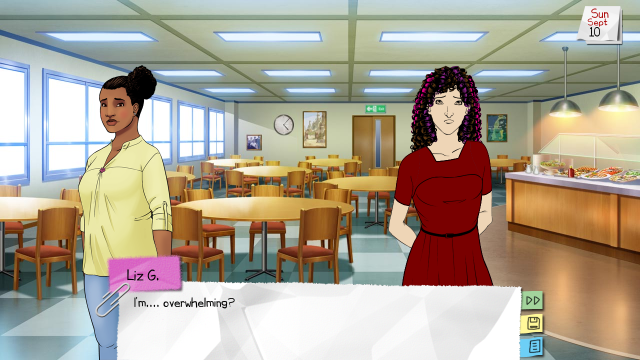 The game is seriously looking gorgeous, thanks to the sprites. Look at this cast!

There should be a final Liz early next week, and then it's onward to the final three sprites in January.

Just on the sprites, Elliot looks kinda short. I know he's still taller than Jake, but it does look like he's been kinda scaled down compared to, say, Adam and James.

Also, wow: Nate looks a lot like me! I shall choose to believe that this is me being made
Jake's canon romantic partner.

I don't know why you'd think that. It's clearly the music that plays while you're doing homework in the library.

ParrotWatcher wrote: ↑
Sat Dec 08, 2018 5:06 am
Just on the sprites, Elliot looks kinda short. I know he's still taller than Jake, but it does look like he's been kinda scaled down compared to, say, Adam and James.

Yeah. He should be scaled more properly in the game, but I think he's just a bit off in this full cast shot. (He also is generally a little smaller, so I don't think it's terrible that he looks a bit scaled down compared to some of the larger guys, but this is still useful feedback; let me know if anything else obviously sticks out like that.)

I think Liz G. actually has the opposite problem (is a little too big), so I'll have to resize her a bit before making her final sprite.


ParrotWatcher wrote: ↑
Sat Dec 08, 2018 5:06 am
Also, wow: Nate looks a lot like me! I shall choose to believe that this is me being made
Jake's canon romantic partner.