Brooklyn Idol is a romantic comedy game set in the indie music capital of the world: Brooklyn, New York!

You play as Soo-jin, a music fan who once dreamed of being a pop idol... until her family moved from South Korea to South Jersey. But Soo-jin doesn't give up! She decides to make music on her own.

So she moves to Brooklyn! And, hey, the other people in her new apartment are musicians too!!! They seem like they could be really great friends... or maybe something more!! 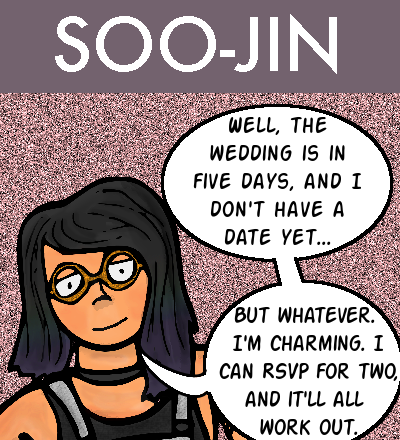 Soo-jin recently moved to Brooklyn to try to make it as an independent musician. Obviously, she likes music! Pretty much all of it!! And food! And people! She's more of an enthusiastic amateur than a veteran, but she just started writing a song that might be her best yet -- and the choices you make will affect how it turns out! 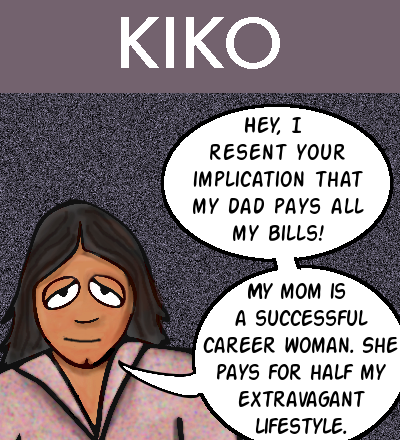 Kiko's a drummer. His band's label is holding a mini-festival, and his band just made THE BIG FONT for the first time ever. So he's kind of a big deal -- or at least that's what he'll tell you. But despite being pretty much a narcissist, he seems friendly, and y'know, at least he's kind of honest about having an ego? 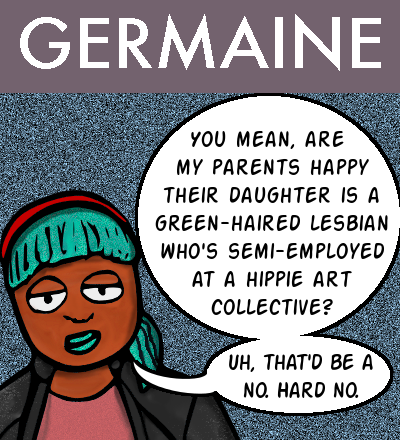 Germaine is the sound engineer at a local do-it-yourself music venue, so she has an ear for detail. She's definitely a pessimist and a little grouchy, but she really cares about the people close to her. 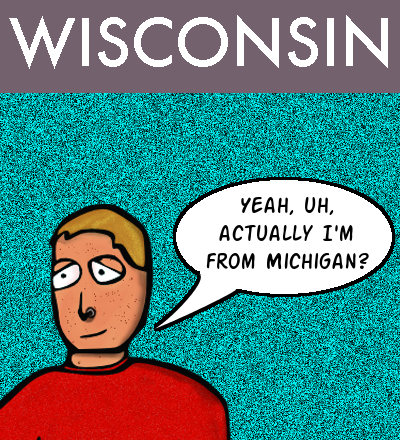 Wisconsin just really likes going to concerts and knows all the local music. Just don't ask them to choose a favorite--Wisconsin is terrible at ranking things. It's all too good! 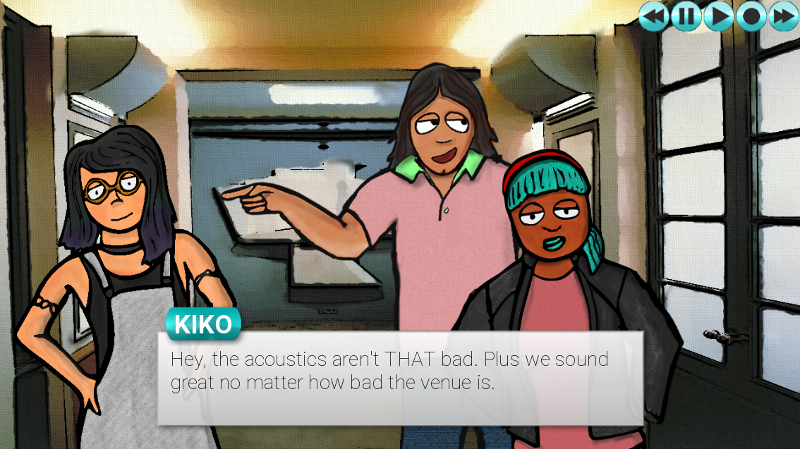 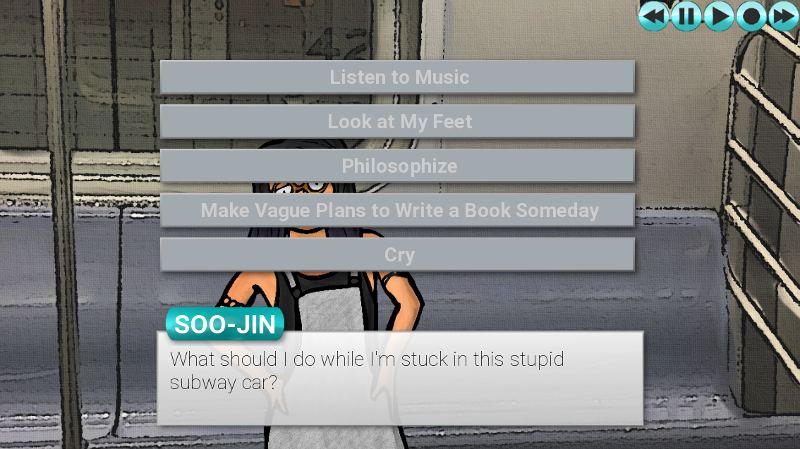 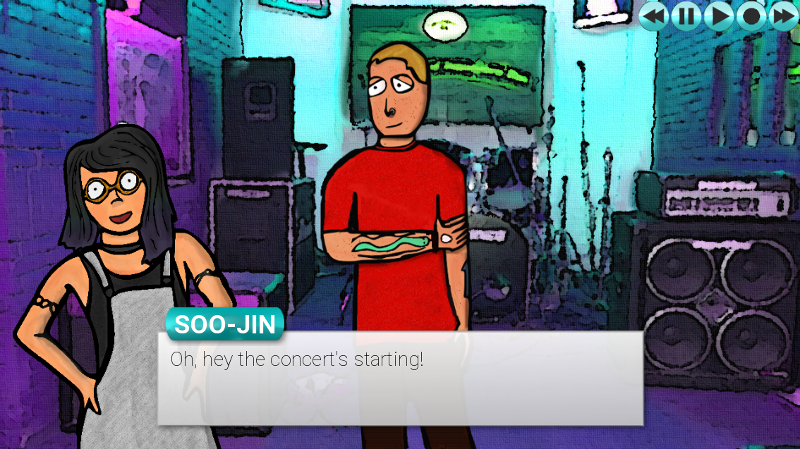 Progress
Currently aiming for a Fall 2018 release date. Assets are all done, just doing some final programming and testing.


Questions
All sorts of comments appreciated! If you want questions to guide you:

1. What's your first impression?
2. What type of updates are you most interested in seeing? Artwork? Story details? Music? A demo?
3. What are some things you associate with New York City?

Updated this post with more info about the story and the characters. Made some progress on the writing -- still have a bit to go before I transition into working more on the visual assets. Hoping to keep updating this thread semi-regularly with more on the characters!

Hahaa, I love this!! Love the characters and the plot. Could the character artist do also bg art for this?
Top

I actually do both character and background art on most of my VNs. Haven't done most of the BGs yet, but the majority will probably have a faux-painted look like the ones above. I use a combination of photo manipulation and digital painting. The source photos will all be direct from New York -- either photos I take or Creative Commons images from the digital archives of the Brooklyn Museum.

OMG! Never thought of that! Why dont just paint on the actual photos? Sorry, just my curiosity cause I love the simple but effective style of your characters
Top

Helyees wrote: ↑
Wed Dec 13, 2017 1:54 am
OMG! Never thought of that! Why dont just paint on the actual photos? Sorry, just my curiosity cause I love the simple but effective style of your characters

I like using a simple style for characters because it makes it easier to do dramatic changes in poses and facial expressions.

For the backgrounds, I usually try to use a slightly different style than the characters so that the characters will stand out against them. What I do actually is pretty similar to painting on a photograph -- I just do it digitally in an image-editing program called GIMP using imitation brushes. I like working digitally with photos because you can combine different layers to get all sorts of interesting effects!

Great! How are you going to publish Brooklyn Idol?
Top

Definitely on itch.io and Gamejolt, potentially also on Steam. I haven't done Steam before, mostly because of the cost/hassle with a (mostly) solo project, but I plan on doing it for some game eventually and this may be the one! If you (or anyone) have any other suggestions for where to publish, I'd definitely take it into consideration too.

Glad to heart that you are thinking of a Steam release! Looking forward to hear more of the development!
Top

Helyees wrote: ↑
Fri Dec 15, 2017 1:55 am
Glad to heart that you are thinking of a Steam release! Looking forward to hear more of the development!

Thanks! I definitely plan on trying to keep this thread up to date, and I'll let you know about how things pan out with Steam.

Made some updates to the main post. Added a character bio for Kiko.

Currently working on a central song that'll play at the end of each route. It'll be one song but remixed in totally different styles depending on which path of the game you choose.

Just wanted to give another brief status update: I'm doing a bit of a re-design on some of the characters. The faces and basic idea will stay more or less the same, but after thinking it over, I'm not crazy about the body proportions of the characters. Going to make some minor adjustments to make them a little more realistic, while still overall keeping it loose-y goose-y and cartoonish. Will have the re-designs to post soon!

Hey, just wanted to post another update since I've totally redesigned the first post of this thread. The character designs and GUI have both been tweaked, plus I finished some work on backgrounds and now have a bunch more screenshots. Also re-wrote some of the story description and added more info about the characters.

I think I have nearly enough material for a trailer to show how the sprites are animated, so hopefully that will be coming soon!

Germaine is a babe, I absolutely love her. Awesome to see a new project from you! ^_^
hey hey I made a thing
Top

I tried a new style for the characters this time. Although in a lot of ways, I think this VN will be kind of a logical next step from my previous ones!