I am Elric Atchison, I am currently a 3rd year voice actor.

Thanks for your interest. Unfortunately, it is unlikely that we are hiring male voice actors for the demo build. This may change in the full game.

First off, an update for everyone on Lemmasoft! Rika Bailey is a character that was introduced several months ago on our twitter. You can see her full bio in the OP. Unfortunately, she is not a love interest/NPC in the demo build, but she will have her our routes in the main game.

75% done on writing. This means the basic foundations have been completed including dialogue scenes. The demo will have a simplified route system, having only a normal route a new game+ route. As thus, it is recommended to play through the game twice.

Script is at over 15k words for the demo so far. This includes normal and ng+ route but it does not include flavor text such and glossary and bios. It's expected to run over 20k in the demo as outlined. There are just a few more scenes to finalize and the writing for the demo will be 100% complete.

Unfortunately, even though the writing is nearly done, art assets are far from finished. This will be the largest delay in getting the demo out the door. I would put a rough estimate of summer of 2020 for initial demo release. Things could easily be pushed back, likely for art.

We will be experimenting with real time outfit selections and an inventory for collecting them. This is something I truly hope will be implemented.

Demo will amount to 2-4 hours of playtime (assuming +-200 words per minute reading time).

Other goals depending on Kickstarter Success.
Otome Route as mentioned, is one of the goals.

Music for the demo will include 6 to 7 custom tracks for the OST. Currently the main menu music is finished. A preview will be posted in the future.

New Character will be officially revealed in late May/ Early June. No spoilers right now, but she (it's a female character) will play a heavy role with Arctia and Rayen in the dream world. She's only introduced in the demo and is not romancable.

Any questions or comments, are appreciated! Thanks everyone who followed us on twitter!

Remember to follow AniClash Studios on Twitter https://twitter.com/AniClashStudios for the latest development updates as soon as they are posted!!

Hello, everyone! Time for another lemmasoft update!

We've recently remade our logo, so some of our promotional images are needing an update. We'll overhaul the OP completely in the future with remade character profiles as well.

On our twitter we recently revealed a new character, Lyca. She may bear "slight" resemblance to a certain Pokemon character in their latest game, but she was not the inspiration behind Lyca's design (Lyca actually was revealed before the latest Pokemon S+S stream). You'll see Lyca in a different light once she is revealed once more, as her alternate persona, or "real-life persona". Here she'll be presented in a total unique way different from her fantasy persona of "Lyca". Stay turned for her second reveal, which will as always, be posted on our twitter page first.

Is Lyca romancable? Yes, she will be, however the scenarios you encounter her in will be different from what you expect.

If you haven't followed our twitter yet, and are interested in this game, please do! All of the support we receive helps keep our motivation high for continued development efforts! We have recently reached 150+ followers on twitter, which is a huge milestone for us!

I can personally say that a demo WILL drop next year in some form or fashion, but I cannot give an ETA date. Likely there will be an initial demo, and then an extended demo launching later to coincide with our planned Kickstarter launch.

As always, thanks for reading, and consider following us on twitter for more timely updates.

I'm impressed by the quality you've shown in your updates! I'm also fond of the fact that each romantic route is separate.

Best of luck in your continuing development!
Top

Piper wrote: ↑
Mon Jul 15, 2019 6:20 pm
I'm impressed by the quality you've shown in your updates! I'm also fond of the fact that each romantic route is separate.

Best of luck in your continuing development!

Thanks so much for your support, and we apologize for the super late reply!

We've totally overhauled the OP, so take a look at our full completed character profiles and also some screenshots from our concept demo! We've also surpassed 250 followers on our twitter! The support from everyone has been really great. This title will be ready for a playable build in your hands soon enough, we're slowly making progress!

Hello again everyone! We've made some significant strides on our twitter. Speaking of that, we have a special tease for you on our twitter.
https://twitter.com/AniClashStudios/sta ... 5664246784

I wonder what character we're looking at? The world may never know!

We are also holding a giveaway raffle once we hit 500 followers on @AniClashStudios twitter account. Here, we'll draw and one special winner will feature an original character cameo appearance in Zeta Wolf Chronicles (drawn by our artist). What is there to lose? Naturally, we'll reveal more about the contest once we reach that point, so stay tuned.

Hello everyone! We've updated our lemmasoft thread in preparation of our demo launch!

Did you know our demo is arriving March 15? That's less than a month away! It's been a long journey but I'm proud to say that the demo is nearly upon us. While I cannot promise everything will work flawlessly (bugs are a given in development builds), we're excited to show you our development up to this point.

Our demo is roughly 1 hour 45 min to 2hours of gameplay (our own developer playthrough clocked in at 1 hr.41 min). This includes:
* 14k words
* 4k+ voiced dialogue
* Over 10 choices
* Multiple endings (even in the demo, yes)


Also, did you know we have some festivities planned for our demo launch? 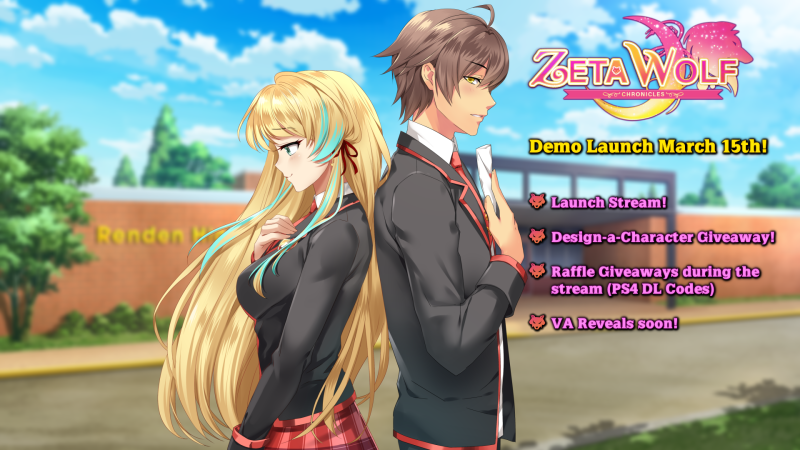 More details about our launch stream will be provided soon, so stay tuned. Yes, there are giveaways involved if you tune in to the stream. Also you're have the opportunity to enter a raffle to design your own character cameo for our game (valued at hundreds of dollars for our eventual Kickstarter).

Our demo is now available! Please give our demo a try! Feedback is appreciated. If you encounter bugs, we'd like if you could submit them to us using this form: