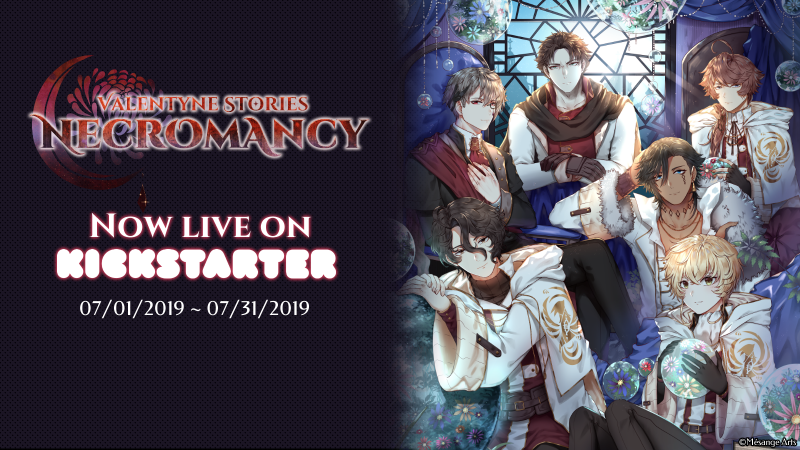 Since it'll be launched worldwide, you can help and participate on Kickstarter! You get 31 days (all of July) to help and get exclusive goodies! And as a thanks to those who will pre-order the game, it's actually cheaper, so got get it!

Don't forget money isn't the only way to help: liking, commenting, and sharing the project help us get noticed and known by a large audience, so it's just as important! 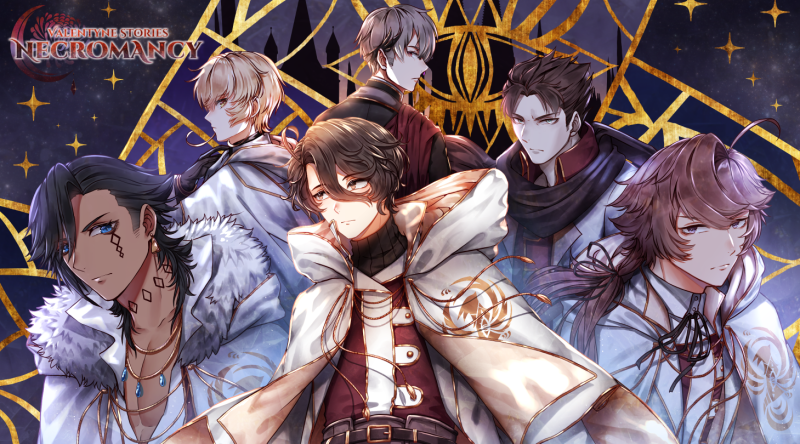 Valentyne Stories Necromancy is a fantasy medieval horrific BL Visual Novel, rated R-16 for violence and gore.
It will also come with an optional R-18 patch. We are using Ren'Py to make the game, and we are from France!

THE DEMO IS OUT! YOU CAN DOWNLOAD IT ON OUR ITCH.IO PAGE!

« Magic is a gift, given to only a few chosen ones in the world. Be it the heir of a rich family or the offspring of the least good for nothing, every son able to use magic is promised to a great future. If he's prone to use his gift for the kingdom, his name will be known in Arcan's History, bringing honor and glory even to his first ancestors. »

After hearing these quite sententious words, Rave left his comfortable town to become a great Mage. New to the Academy, which exists to teach the magic elite, the young man came to learn, to become « someone », to make his family proud. Getting better and avoiding to be scolded by his teachers should have been his only concerns for the three years coming by. Should have. Unluckily, Rave happens to be in a bad place, at the wrongest time.

From the student sleeping in the bed next to his to the guard watching over him, everyone is tense in the school. Something is coming, something that will more likely change their whole world, where everyone gets a part to play.

Rave will have to discover what's going on, choose whose side to pick, and who to brave.

The full game is expected to have:

The game will be available on both Steam and Itch.io! 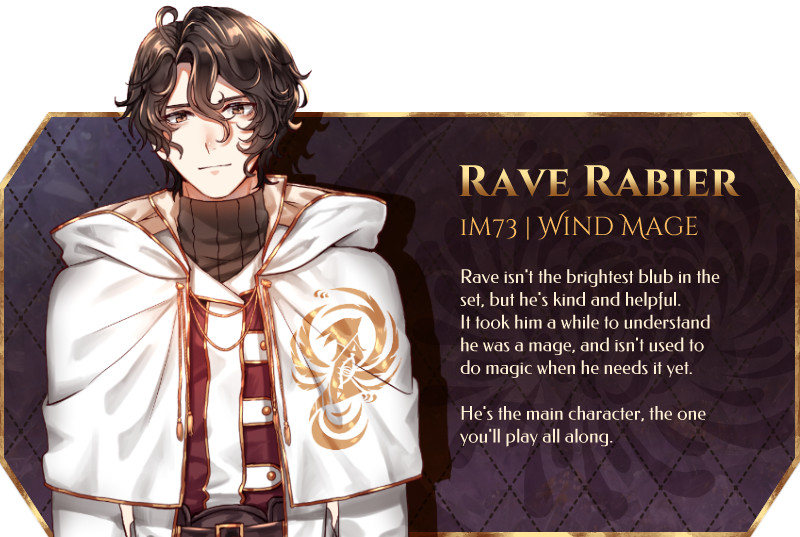 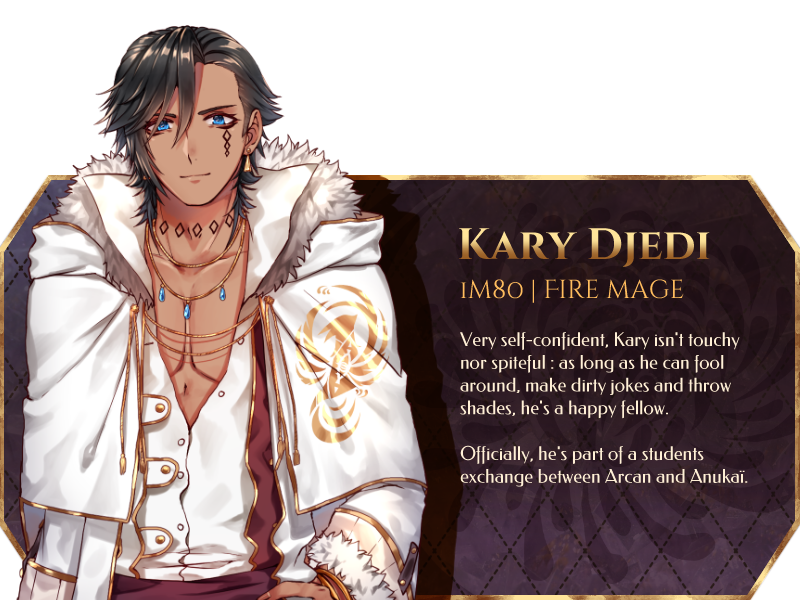 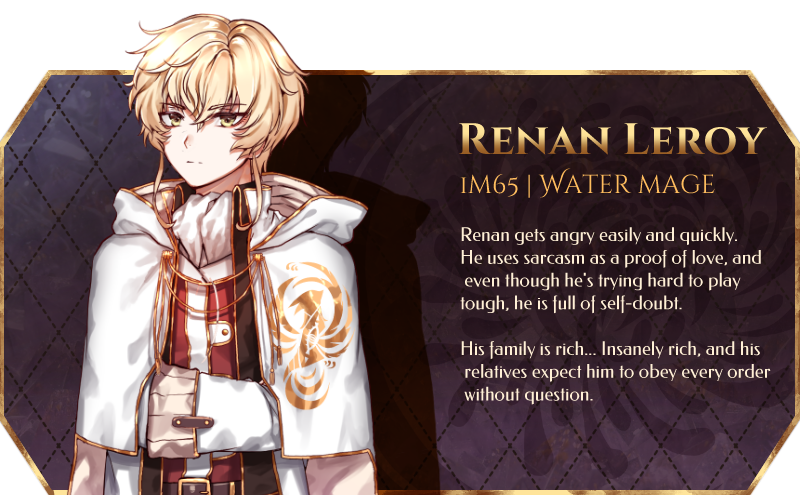 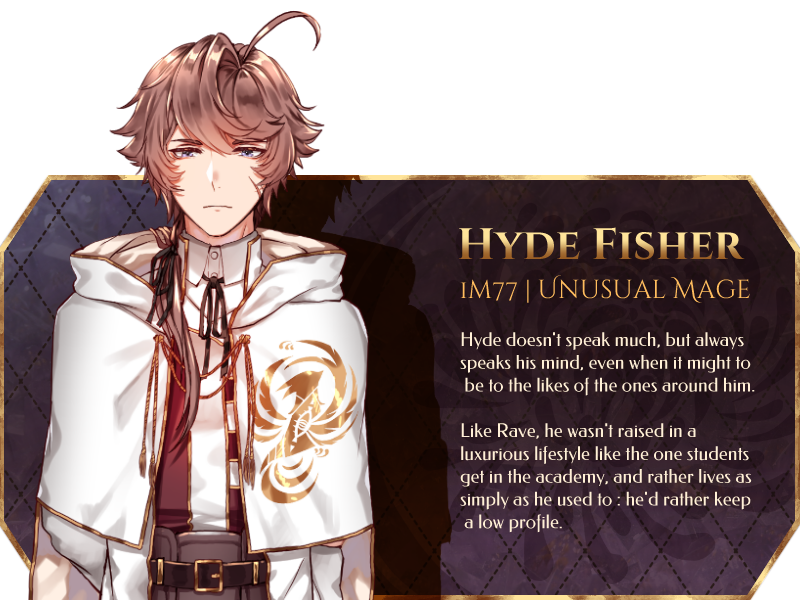 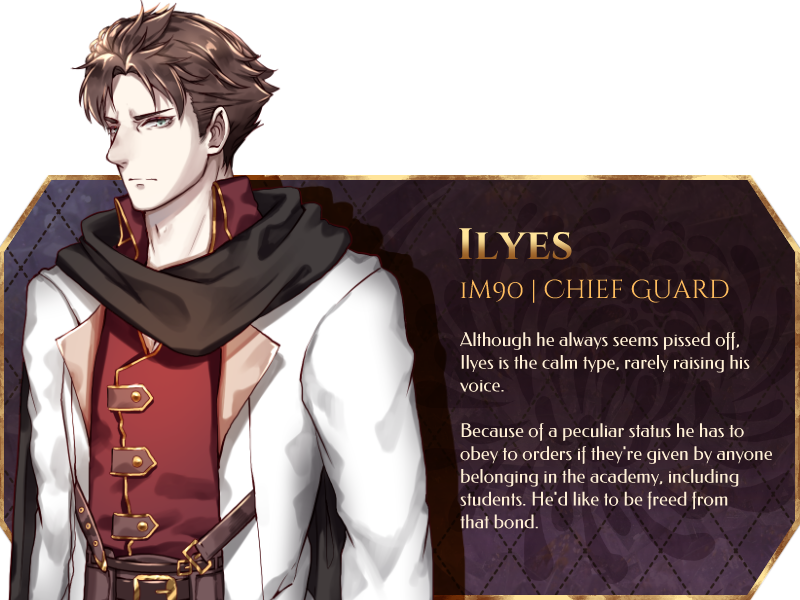 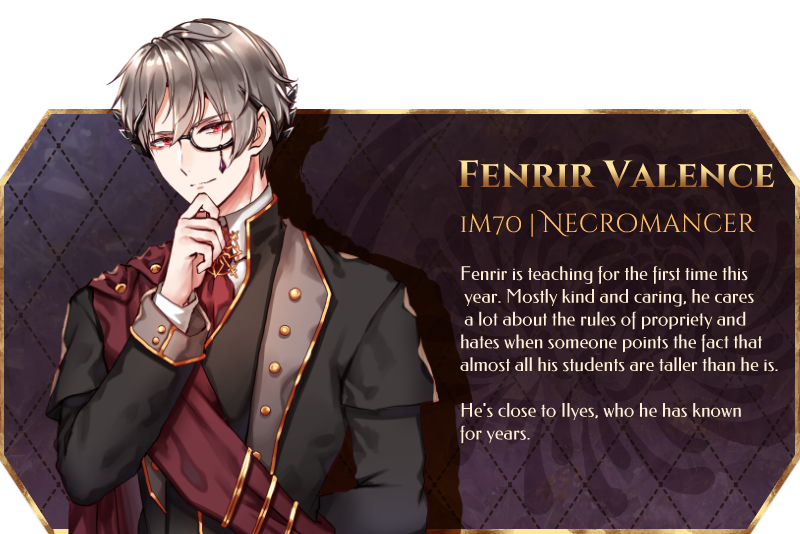 Our team is working 100% on it and we're aiming for a 2020 release for the first 3 routes. We estimated again the time needed to make a project of this size.

The 2 remaining routes will be released during next months after with multiple updates.

Our kickstarter is planned around June, stay tuned!

If you ever have questions or remarks, do not hesitate to ask them!

I'm excited to see that this will be available in both English and French! I'm always looking for good reading material that can help me improve my French. And I always love magic school settings! Good luck!

Wow. Was really happy to see this being a Boy's love game instead of an otome game honestly. I really want more yaoi games lol. Anyway, this game is really for me. It's not only a BxB but also a fantasy. The art is lovely and the story is really interesting. One thing I'm confused about is length. Is the entire game 50,000 words or just a longer demo? Will the game be longer than that? Anyway, really excited to play this.
Top

parttimestorier: Thank you very much! I'm glad you find it interesting and willing to play it in order to improve your language

aliciarune: Oh I may have worded it wrongly! The features are only concerning the demo, game will be much longer and will have 100+ BG arts and CG, it is just for now we cannot give an estimate on how long the full game will be. (we believe it will be quite long since we have a lot of things to tell in the story!)

Thank you very much! We also believe that there is not enough BL games and since we love it it was our first obligated first choice of VN

Thanks so much for answering. I am glad that the game will be longer =D. I'm really excited to play. I try and back Yaoi games and will back this one. Hope you make more BxB games as well =D. And wow, that's a lot of art in terms of BG and CG, but it'll be amazing. May I ask what your funding goal will be? You have a nice following on twitter to and the art and story are great. Is this your only game right now?
Top

aliciarune: Thank you very much for your support and compliments! We're trying to do our best! Our funding goal would be approximately 30k €, but it could be less or more, we're still estimating the total breakdown. A bit nervous to be honest since the goal is pretty high. And yes, this is our only game for now! Our Scriptwriter already worked in another game though.
Top

Yay, another BxB game! The art is really pretty and the story sounds interesting~ Will definitely be keeping an eye on this!

@mjinx: Thank you very much!

Also, we have some updates!

We are 90-95% progress on the extended/international demo. Final demo's script is 36k words long. We are making final corrections, finishing script's proofreading, sounds and the English translation is almost done!

Here are some script's snippets! 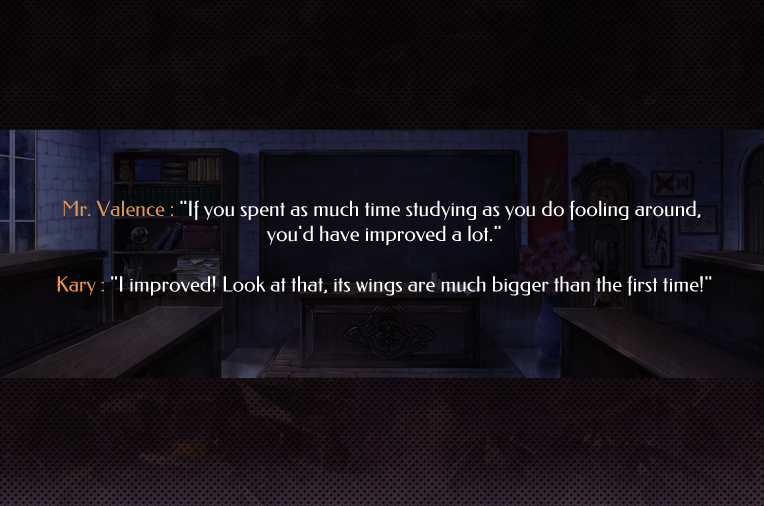 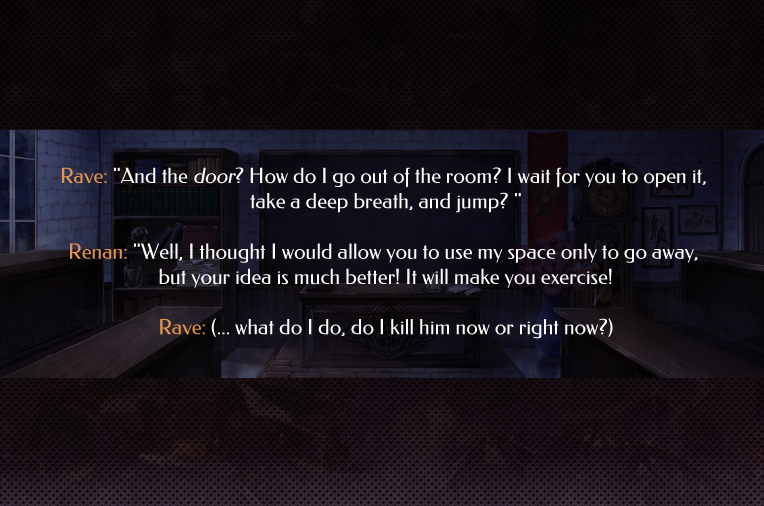 If the overall atmosphere and the story are quite dark, it doesn't mean it will lack of humor!

Thank you for reading!

EDIT: The wordcount on the original doc and Ren'py's implantation are totally different, it ate us 10k words. So the demo will be 36k instead of 46

This looks amazing.
The artstyle and characters definitely have my interest! Looking forward for your demo release~

Ouuu, this looks really good! I'm in love with Fenrir and Kary's designs and the story sounds great as well. Looking forward to the demo!
Top

This looks really interesting! Ilyes and Fenrir are the ones that interest me most at the moment. Really look forward to the demo and the KS!
Top

It is with a great pleasure we can finally say: THE DEMO IS OUT!!! 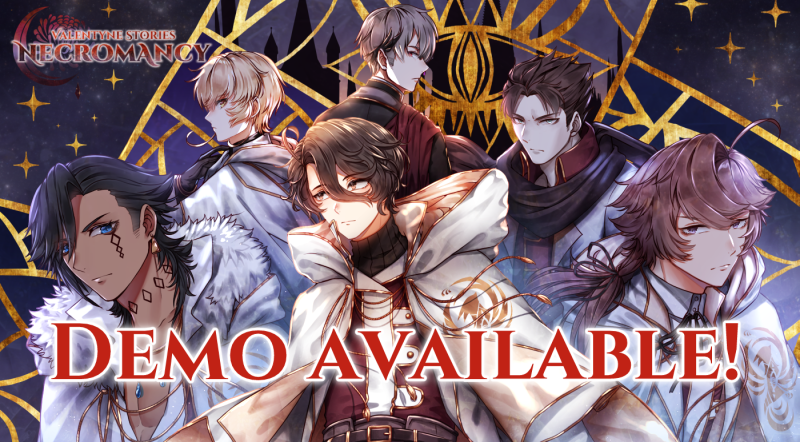 You can download it and play it right away on our Itch.io Page!

Please note that the translation was made by a non native English speaker friend. We loved her translation choices, but since she was alone to do it, it is not impossible that some mistakes were not seen (nobody is infallible orz). Thank you for your understanding and have fun!

@CodeV: Thank you very much! Speaking of it, the demo is realease

@sonnenblumen: Thank you very much! Hoping you will like the demo!
@akrasia: Thank you! We're happy you are looking forward to it!
Top

Brilliant! I really enjoyed the demo.

As you've already pointed out though, your translator isn't a native english speaker. She did really well but there are some obvious mistakes that a native speaker would have probably picked up. I suggest a native proofreader just to double check.

Other than that, it's brilliant. I enjoyed the choices, it's not often a game will have choices that actually make me pause and consider what the best option is to take. The art is of course, beautiful and the story left me curious for more! I really want the boys reaction to being picked to help Rave study. I look forward to the KS!
Top

@akrasia: Thank you very much for your feedback! We will of course recruit a native English proofreader if the kickstarter is funded! We're really happy you liked the demo enough to support us!
Top

the art in your game is gorgeous!! i love the fantasy architecture