A place for game announcements, and for people to discuss games being made.
Forum rules
Please read the sticky before creating a new topic. Linking to Kickstarter/Crowdfunded games requires a demo.
Post Reply
15 posts • Page 1 of 1
Message
Author

I'm Andy Mitchell, the writer and designer of the Solar Echoes RPG and the owner of Corefun Studios, LLC.
I'm excited to announce that I've been working on my first visual novel, The Star Legation!


The Story
The Star Legation is a Sci-Fi Visual Novel game set during the pre-history of the Solar Echoes universe. You don't need any knowledge of Solar Echoes to enjoy the game, but you might notice some “easter eggs” if you're familiar. The story begins...

Only a few generations have passed since the discovery of Faster-Than-Light speed travel. FTL has transformed the universe, and several alien races have realized they are not alone. Some have managed to peacefully interact and begin a tenuous trade relationship. Others, however, have become locked in bitter wars.

The need for the Interstellar Union (ISU) was first realized by the Humans and Reln, though the Reln still claim it was their idea. It was agreed that all the known races should be included in the ISU. But who would answer the call to represent their species and extend an invitation to the others?

You, the player of the Human protagonist Trey Donovan, will need to make many crucial decisions during this sensitive mission. Success will result in the formation of the Instellar Union--a peaceful alliance among all the known races that will promote trade and cultural exchange. Failure, however, could mean your death, the end of the ISU before it ever begins, or even a massive interstellar war.

Choose your words carefully and consider every decision you make. The gift of FTL could be a blessing towards a prosperous future among the stars. Or, it could become a curse that swiftly delivers the threat of alien annihilation to your people.

Game Features
The Star Legation is a Sci-Fi Visual Novel game full of intriguing alien characters, bizarre foreign cultures, and interstellar conflict. Navigate the complex personalities of your alien crew, negotiate with alien leaders, do battle if necessary, and even risk romance across the stars! Shape and experience your own fate!

Complex Branching Storylines
Your decisions affect what happens! Some choices can mean life or death, and others can subtly influence a relationship that might affect your situation later in the game. There are multiple paths to success and failure!


An Expressive Cast of Characters!
Each character has a range of emotional expressions as they react during conversations. However, some alien characters are easier to read than others! Get to know each character so you can manage your starship crew. You never know how each relationship might affect the story!


Stand Before Alien Leaders
This is a diplomatic mission, but that doesn’t mean everyone will be agreeable. Know when it’s appropriate to use your clever wit, an aggressive tone, or a conciliatory approach. The fate of your species might depend on it. No pressure!


Adventure Across a Dangerous Universe
The Star Legation will take you to mysterious alien planets, powerful interstellar anomalies, and even throw you into deadly starship battles. A rare fight might even erupt in your own starship, if you get boarded!


Can Long Distance in Space Really Work?
Two different human women will be in contact with you during your journey. You can keep it totally professional if you choose, but…it gets lonely being the only human among an alien crew! Multiple endings depend on your conversation choices.


Easter Eggs for Solar Echoes Fans!
Gamers familiar with the Solar Echoes tabletop RPG may discover some insider references in the visual novel and hidden meanings in the artwork!


Role-Playing Game Elements
Determine your abilities at the beginning of the game and trigger different route options during the story! Experience a range of dilemmas and face decisions that involve your particular set of skills.


Decision-based Battle Systems
Starship battles and personal combat are both conducted using a visual novel inspired choice system which blends with the flow of the game without removing you from it. No random chance or reflex skills are involved—just your tactical choices!


Original Music!
Discover the music of composer Andy Mitchell, including adaptations of his unique compositions as well as original music composed specifically for this science fiction space opera!

What about this game interests you most? What doesn't interest you?
What's your impression of the game so far?
What do you think of the characters? Any favorites?
Since the game is based on the Solar Echoes RPG game universe, does that make you more or less interested in playing it?
Any other comments, questions, or feedback?
Last edited by Chimaera9 on Thu Mar 19, 2020 11:48 am, edited 5 times in total.
Top

What about this game interests you most? What doesn't interest you?
SCI-FI I'm a sucker for scifi games

What's your impression of the game so far?
It looks very professional

What do you think of the characters? Any favorites?
it's too early to say I'd have to play to find out

Any other comments, questions, or feedback?
I think I'll be subscribing for updates.
Top

Thanks so much for your responses! I'm glad you think it looks professional--that means a lot to me, since I'm doing this myself with the help of some excellent artists.
Thanks for your interest! I'll try to keep things updated here, too.
If you want to familiarize yourself with the Solar Echoes universe, check out some of those links (the Solar Echoes webpage, and the youtube video)
-Andy
Top

A few new updates!
The talented artist, Aeghite, is now at work on the final CG that you'll earn if you survive to the end of the game! It's looking amazing--she's really going all out for an incredible piece of art!

I've successfully completed preparations for 3 of the 9 main character sprites--the 3 human characters. They had the greatest range of expressions, but I've sized and prepped all their art so they are ready for use when I start working on the demo. There is a HUGE range of expressions for the human characters, especially the protagonist! If you'd like some insider details, subscribe for my monthly insider email here:
https://solarechoes.us20.list-manage.co ... 75f74ec003

A quick question for everyone regarding the demo:
I'm thinking about having some choices greyed-out so you can see them but not select them. You'll be able to make a few choices in the demo, but you'll end up with one route at the conclusion of the demo. What do you think?
Top

I think having one concise route at the end of the demo is a good idea! It gives everyone the same experience, which is important if you want feedback on the same bits of game. I look forward to trying it out

Thanks for your thoughts, FerventWriter!
Good point about it being useful giving everyone the same experience for feedback. That will definitely help me with the development process.
I'm glad you're looking forward to trying it--knowing that makes me even more excited to put it all together for everyone!
Top

The next insider update goes out tonight!

Sign up so you won't miss insider info and game developer tricks and how to inexpensively generate tons of character expressions!
Discover the method I used to enable the creation of 100's of expressions without having to commission each one individually!

A brief update: It's been 2 weeks since I started programming in earnest, and I now have the intro sequence, the opening (scene 1), and most of the second scene finished, including animated sequences, sound effects, expressions, and music. The opening scene also has some cool RPG elements where you make choices about your character's skills, which have an effect on the story (you can get the best ending whatever you choose, but the story does have different parts depending on what you pick!)

It's moving along! I'm not sure how well I'll be able to keep my target pace of 1 chapter per week, but I can guarantee that the demo (first 3 to 5 chapters) will definitely be ready before spring. Keep in mind, this project has 35 total chapters, plus several additional battle sequences that I'm not counting as chapters.

My goal: have it completed by this time next year!
Kickstarter will run late winter, early spring, so keep your eyes open for announcements. If you want to be one of the first to know when it launches so you can get some of the high-tier limited backer awards, sign up for the monthly insider email here:

Here's a quick screenshot of our protagonist getting a starship tour:

A new video preview is available, including a few screenshots with short clips of some of the music I wrote for the upcoming Star Legation visual novel!

Hey everyone!
I just wanted to give you a brief update on the game--the demo is finished! Everything but the UI is complete, and I'm hoping that will be finished by the end of January. I've already sent the demo out to my internal beta-testers, and I've been getting lots of positive feedback so far.

The demo will be released online when I start my Kickstarter campaign, so I'll let you know when that goes live. If you'd like to be the first to know so you can grab some of those limited backer awards before they're gone, subscribe to my monthly insider email (with just your name and email) here:
https://solarechoes.us20.list-manage.co ... 75f74ec003
Top

Another update! I've made a promo video for the Star Legation and except for the voice acting (which will be done this week), the video is fully edited with sound effects and a scifi music composition I wrote. The video will be attached to the upcoming Kickstarter campaign, which will be launching in spring!

If you'd like to see the video early, sign up for the monthly insider email (link in previous post.) Insiders will be sent an unlisted youtube link to the video before it officially goes live.
Top

The Kickstarter campaign for The Star Legation is launching late next week on March 19th!

I'm excited to show everyone how development has been progressing with the game. Any support you can offer would be great, whether through pledges at Kickstarter or just helping me spread the word in social media. I'm doing all of this myself, so any help will be very appreciated!

The countdown has begun, only 7 days left! 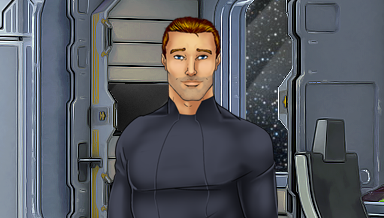 Here's a Youtube link to the new trailer for the game, which launches on Kickstarter this Thursday, March 19!

The demo will be streamed live on Twitch tonight, 7pm CST! Check it out at this link:

Hi Everyone,
The Kickstarter for The Star Legation scifi visual novel launched today! Please check it out and see the game trailer, try the free demo, and check out all the cool awards you can get. Please consider backing this project, because it will enable me to afford the full development of the game. I am conident that I can deliver an awesome game for backers, with a memorable and meaningful story told through characters you'll really enjoy spending your time with!

Thanks for your interest and support!
Best,
Andy
Top
Post Reply
15 posts • Page 1 of 1