A place for game announcements, and for people to discuss games being made.
Forum rules
Please read the sticky before creating a new topic. Linking to Kickstarter/Crowdfunded games requires a demo. Updates to Patreon-backed games may be posted once every 2 months. Adult content should not be posted in this forum.
Post Reply
10 posts • Page 1 of 1
Message
Author

A new visual novel that tells the story of Mobile Autonomous Intelligent Devices (M.A.I.D.s), whose idyllic way of life in your household was ruined by an unknown and dangerous power. Socialize with M.A.I.D.s to oppose the antagonist, conciliate the conflicting girls, and maybe fall in love!

Game features:
- Four humanized household items ready to fulfill everyday tasks in a way you can hardly imagine: the girls carry out every duty with the help of their bodies.
- 3-4+ hours of gameplay with 60,000 words of text.
- A gallery with high-resolution lewd images.

The game will be available in an English version; we are also considering a Russian translation.

You can add the game to your wishlist using the following link that will open steam automatically (PC version only): steam://openurl/https://store.steampowered.com/app/1413600

(If you are experiencing any issues finding the game on Steam, ensure that Adult Content is turned on for you. Steam is also blocking anyone not logged in from seeing all "Adult Only" apps, including "M.A.I.D.s".)

M.A.I.D.s is a visual novel about the world where AI was created twenty years ago. Otherwise, the world is just like ours. The AI was created in a private corporation, which decided to sell it in form of sexually attractive girls with functions of household items. This twenty-years period was a test, to understand how AI would interact with humans.

M.A.I.D.s (Mobile Intelligent Autonomous Devices) don’t have any rights, but due to the player’s decisions this might change. In general, you can treat this situation a “Detroit:Become Human”-like. The issue of M.A.I.D.s’ rights is very acute right now: human rights activists demand changes. Currently, if a M.A.I.D. is getting raped, for example, it is classified as a damaged property.

The changes are long expected, and the coming pandemic will only work in their favor. The test period has shown that M.A.I.D.s psychologically are almost identical to humans.

We are expecting to have 35-50 sprites including full-body sprites. 10 gallery items are almost ready. We are also preparing more than two dozens of backgrounds.

For more illustrations of work in progress, see our development diary on Reddit:

Current restrictions on image size prevent us from copying their url here.
Top 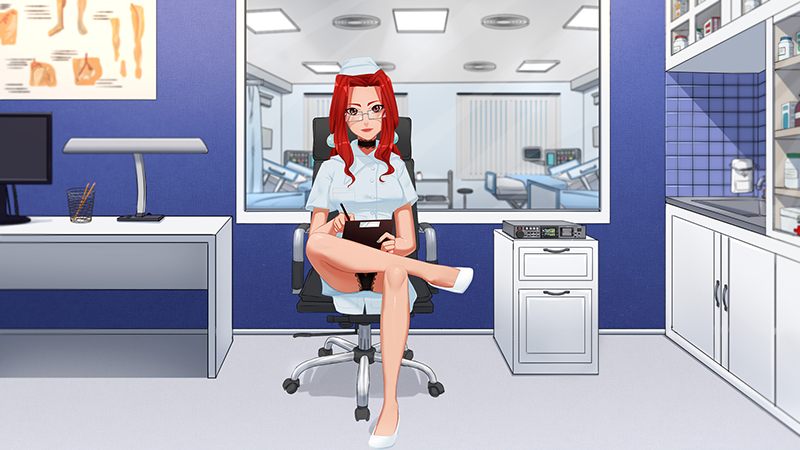 Gallery Item 2: Bee, the blender, preparing a freshly pressed carrot juice. Since the image is NSFW, we cannot post it here. See the image on Reddit: https://www.reddit.com/r/visualnovels/c ... tem_2_bee/
Top

The novel will provide approx. 10 choices, which differ from our previous game (Meowhalla). It was feeling too short because the initial choices led to several different outcomes, which blocked another half of the script. In M.A.I.D.s, we introduced the invisible point system: each choice doesn’t influence the narration but rather only the ending you get. Each ending has approx. 1500-2000 words of unique text (3 endings in total). We are happy to announce that the overall world count has almost reached 70.000 words, more than we have initially expected. The censored version (if we get it approved, it’s still undecided though) will be 5.000 words shorter.
Currently, our visual novel is completed as follows:

- The script is 100% complete (submitted to the proofreading);
- Sprites are 30% complete (will be finished in March in full);
- Gallery is 90% complete (we are still expecting final arts for the uncensored version);
- Backgrounds 75% complete;
- Interface 0% complete. 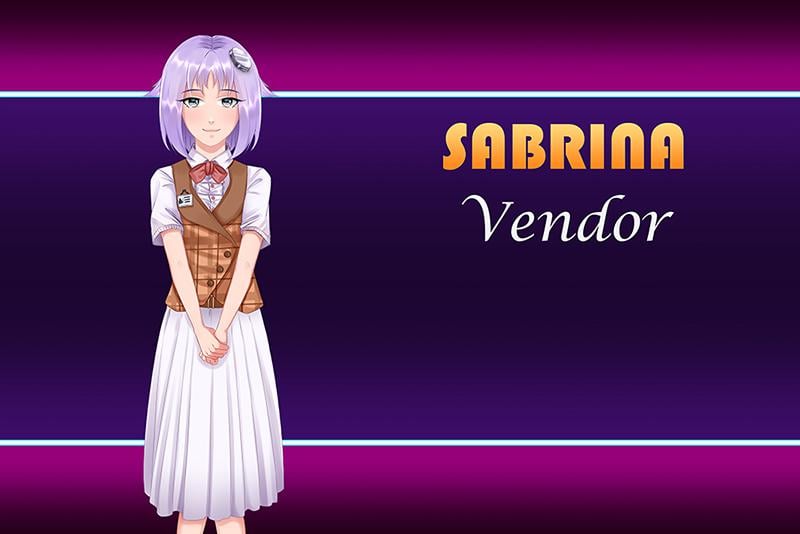 Important: Due to some technical difficulties the release date got postponed for 5 weeks. New release date is June, 11. Unfortunately, as many others, we couldn't avoid some delays in our work.

We are planning launch a Kickstarter in about a week to gather funds for additional features. We’ll announce it separately.

For more illustrations, please see the DD on Reddit:

Having recalculated our budget, we are pleased to announce additional content for our second game in development, M.A.I.D.s. Initially, we planned to start a Kickstarter campaign to fund three substantial things: 1) Significant gallery expansion; 2) Male sprites; 3) Own soundtrack. Realizing that it would be possible to implement this content partly anyway, we changed our mind given the fact that real chances of collecting the necessary amount of money for an unknown Indie developer would be extremely hard.

As the result, we present the new content that will be included in the base game:

1) The gallery gets expanded from 10 to 14 arts. New arts will all be included in the uncensored version only and should illustrate the sex scenes.

2) All sidekicks will get their sprites. Male sidekicks, who turn up from time to time, get full-body sprites, while the most episodic characters get only a portrait. In any case, we do believe that this step would significantly increase the quality of the game and make it more “alive”. No one would like if a main character talks to an empty space.


Mitch is a supervisor in the biolab where the hero works. Against his wishes, he gets constantly involved into awkward and embarrassing situations: 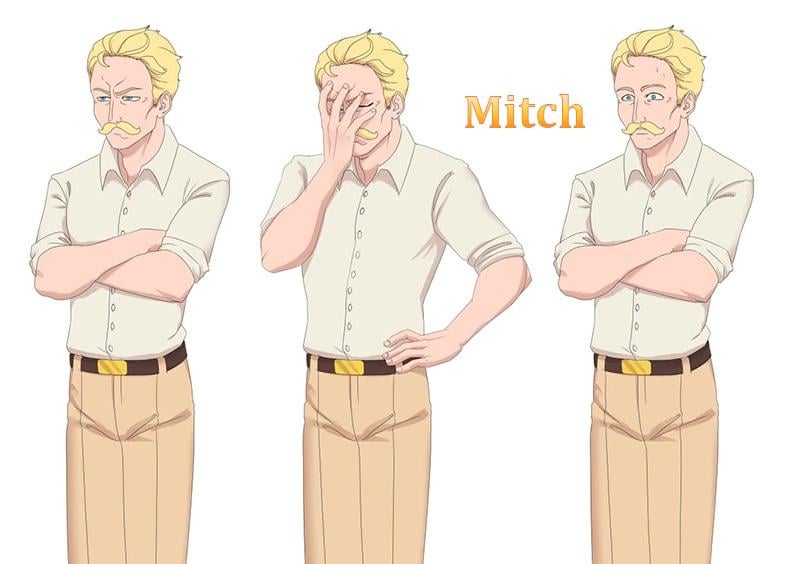 We don’t want to reveal the role of other characters just yet, but maybe you can guess: 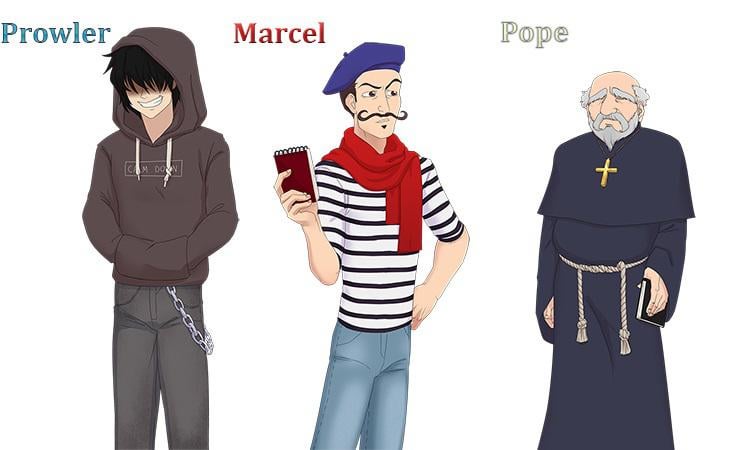 Finally, we are considering publishing the game not only on Steam, but also on Itch.io. It will give you an opportunity to pay slightly more than the game’s price if you want to help our studio develop further.

Soon, we’ll present an example of the images from the uncensored gallery. Several of them will be made by a completely new artist who specializes in this kind of stuff.

Don’t miss any news from us:

Most of graphical assets for the game (M.A.I.D.s) are ready, and we are gradually initiating the process of polishing and testing. Our first build is now bug-free and can be played until the end. As a matter of fact, we will prepare the demo-version of the game, which will be published and available for the download for free when the game is released, or even earlier, if it is possible to show it during a special event. It will contain approx. 5000-8000 words (approx. 10% of the base game).

- The script is 100% complete (proofreading finished);
- Sprites are 90% complete (only some sprites for cutscenes remain);
- Gallery is 95% complete (we are still expecting final arts for the uncensored version);
- Backgrounds 100% complete;
- Interface 0% complete (but we plan to hire a designer for it during the next month).

Here are some new character assets: 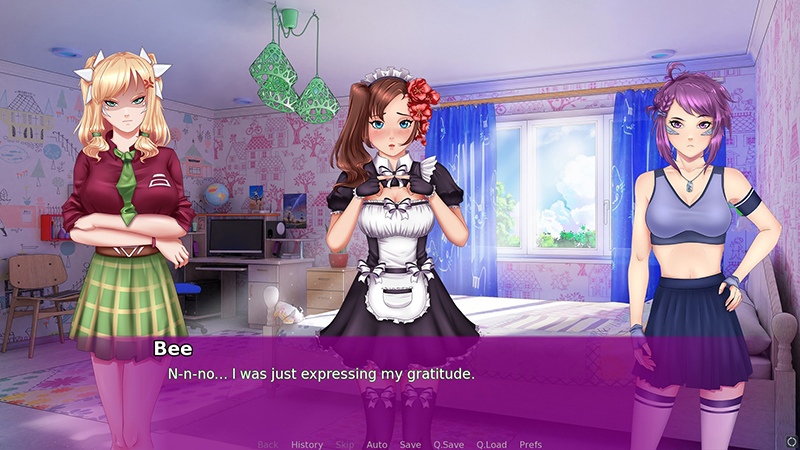 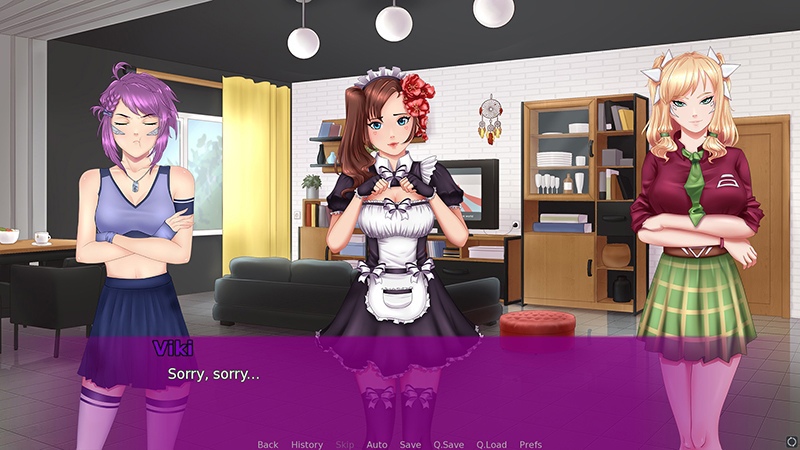 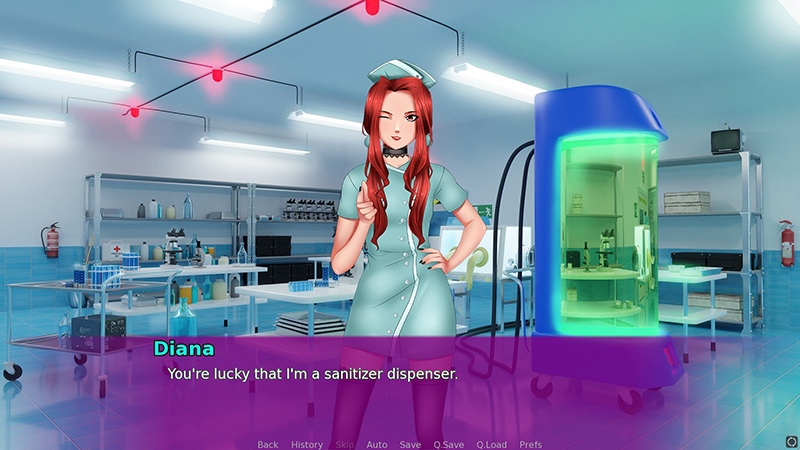 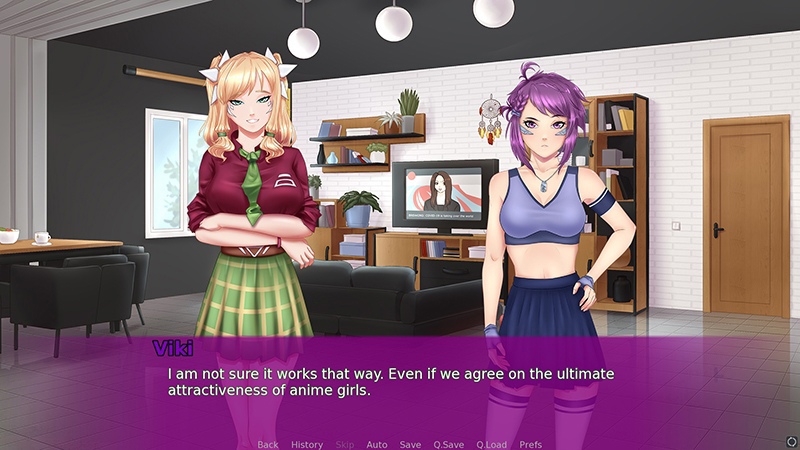 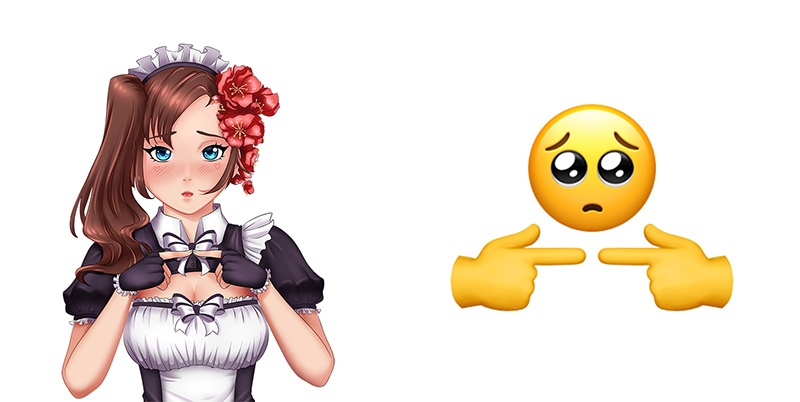 Don’t forget, we don’t show you all characters. The nature of the antagonist should remain a mystery until release, but probably you can guess: 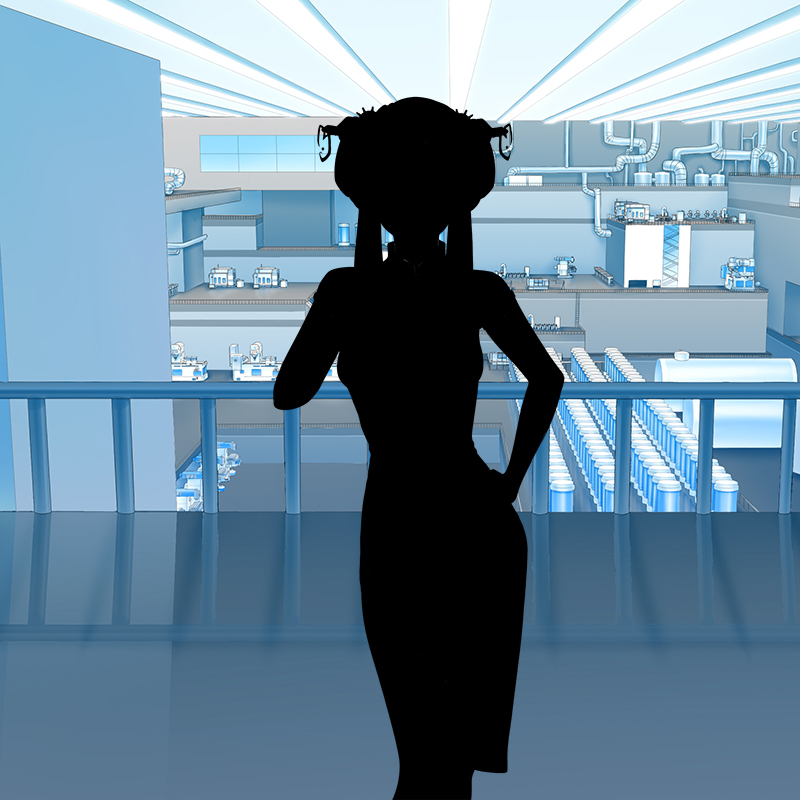 Apart from the city backgrounds, we prepared a couple of the backgrounds with nature, check them out: 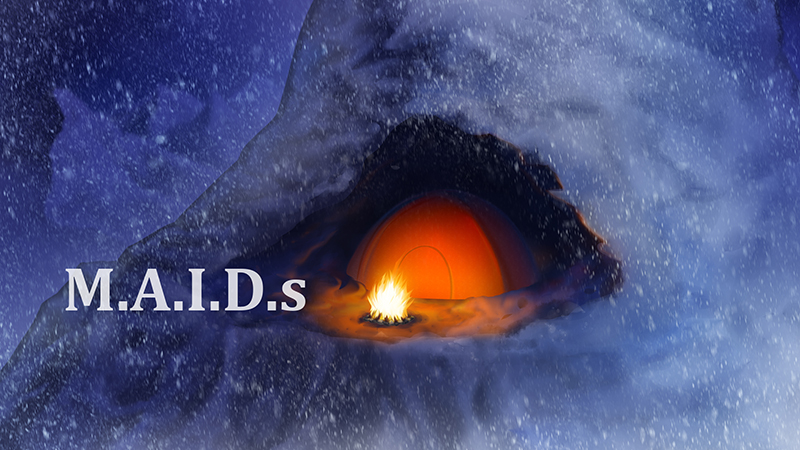 Unfortunately, we won’t be getting a censored version. It turned out that such a game as ours can be classified as “Adult Only” even if all nudity and sex scenes are cut out. Therefore, you won’t need any patch or DLC for the game, just buy it and play.

The work goes as planned and we expect that the game will be released as planned, on June 11th.

Expect to hear more from us,

The story of M.A.I.D.s covers two weeks from the life of a human-android family. Each passing day will bring new adventures and challenges. In the end, heroes would find their fates in hands of a mysterious and hostile power. Everyday comical situations are intertwined with greater events, and seemingly insignificant choices influence the surrounding world.

We would like to show you a short gameplay video from the prologue:

Do you remember our male sidekicks? They will appear more or less frequently in several scenes. However, we also have a “second-grade” sidekicks, destined to appear only ones or twice. For them, we prepared the side images. That is how they look: 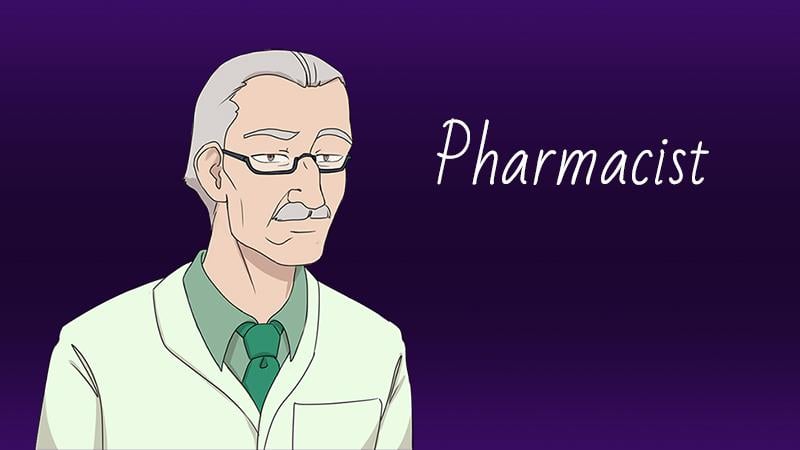 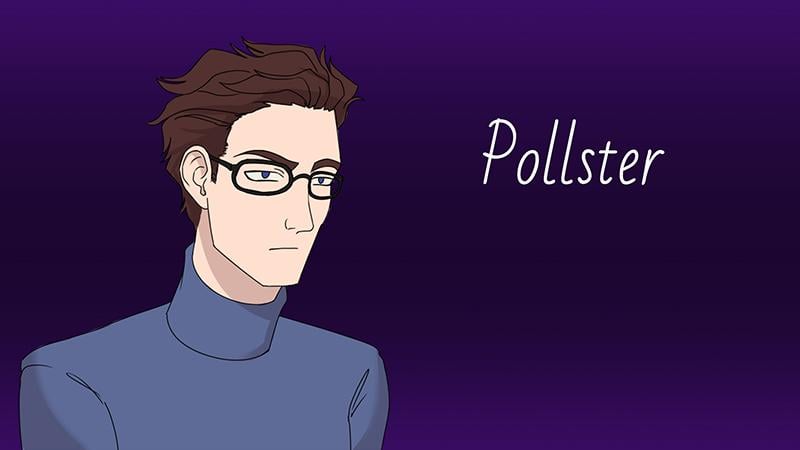 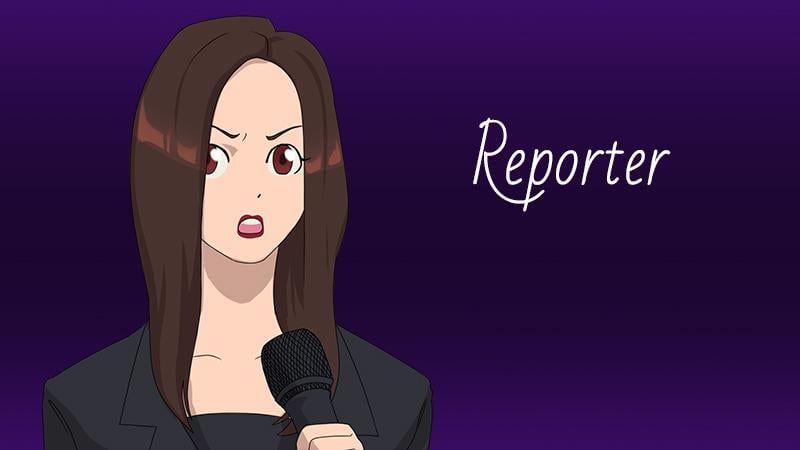 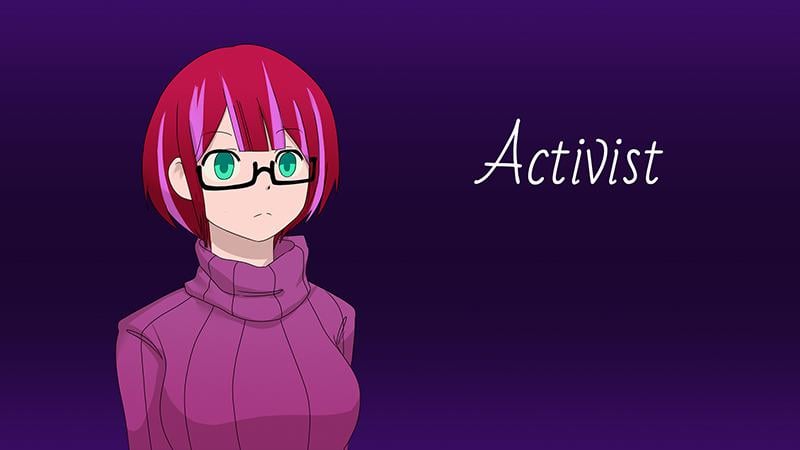 A little more information about our gallery. The gallery will include biographical description for main characters. Each main character will have two gallery items with censored and uncensored version, plus several of them will have more. Here is our gallery panel: 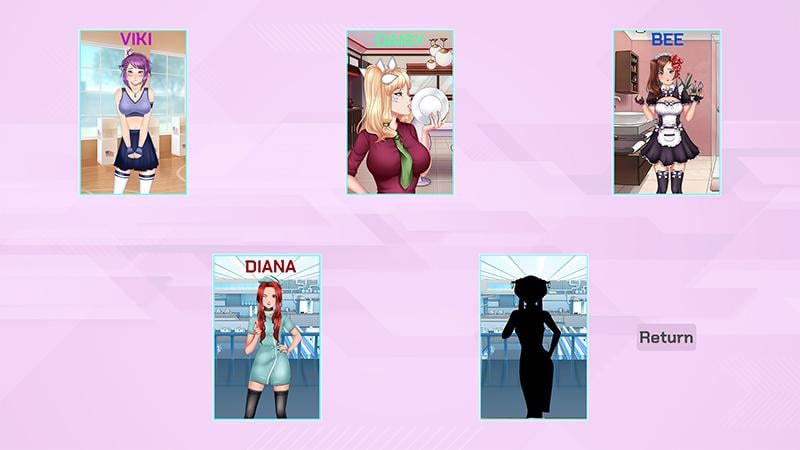 An example of the gallery’s screen with biographical details: 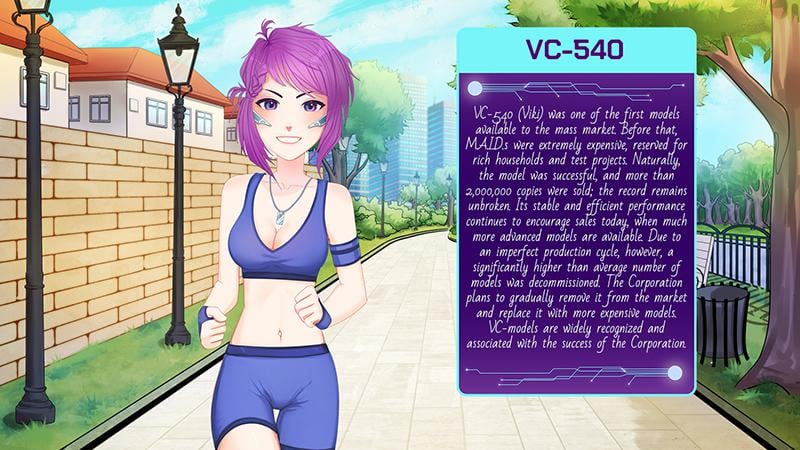 Interface development is ongoing, but we are ready to show the dialogue window, fonts and more: 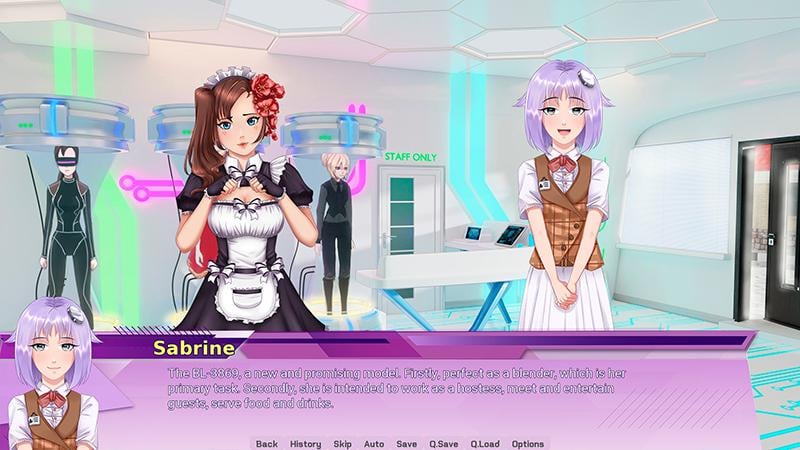 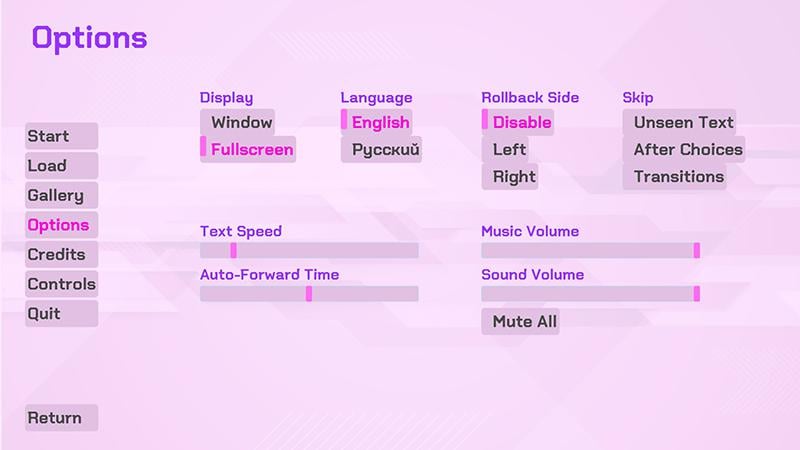 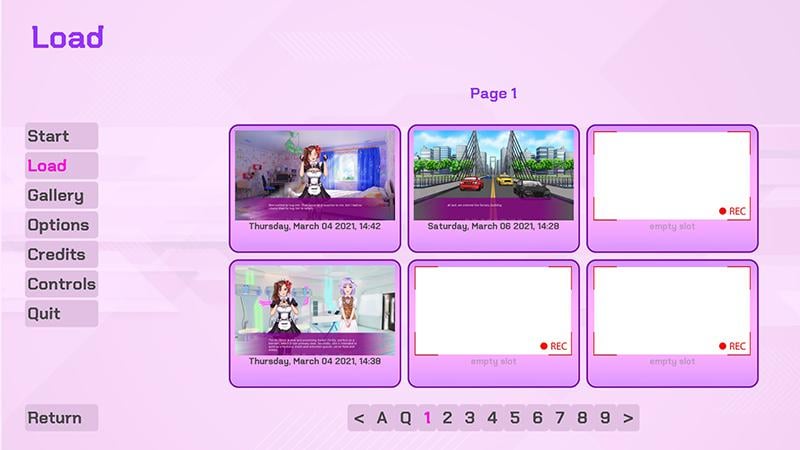 Currently, we still have to conclude our beta-test and fix the remaining issues, as well as to continue our work on the interface and marketing campaign.

The game is released on June, 11. Save the date!
Top

The release date is close, and, finally, we are ready to reveal the price. The global version of M.A.I.D.s will cost 6.99 in the Steam store, and you should expect the corresponding prices in the digital distribution in general. Please, note that we are a very small enterprise, and the price was established as a balance between the need to survive and the desire to make our product affordable for the broader audience.

In this last development diary, we show you the last pieces of our work.

First of all, we introduce an animated image of Bee, who will meet you in the main menu:

Secondly, we added proper transitions and transformations to the scenes, which now look more dynamic. Here is the video comprised of three examples:

We also would like to show you another gameplay video with a hilarious scene with Daisy, which occurs at the main character’s workplace:

Girls are waiting for you to join them in adventures!