It Was Always About You [Magical Girls] [LGBT] [Gallows Humor]

It Was Always About You [Magical Girls] [LGBT] [Gallows Humor]

If you're using a screen reader or otherwise want a version of this post without images, please visit the all-text version here

"Don't you hate it when you're walking back to your apartment and you see the cool blind girl from calc trying to fight a terrible monster-like entity... Then you accidentally distract her somehow, and her friend gets cut in half by the aforementioned monster? Hahaha yikes! Like and subscribe if that's hashtag relatable!

...My name is Hotaru Yang, hi. I used to have a radio show; now I mainly just talk to myself. And I guess to you too, dear listener." 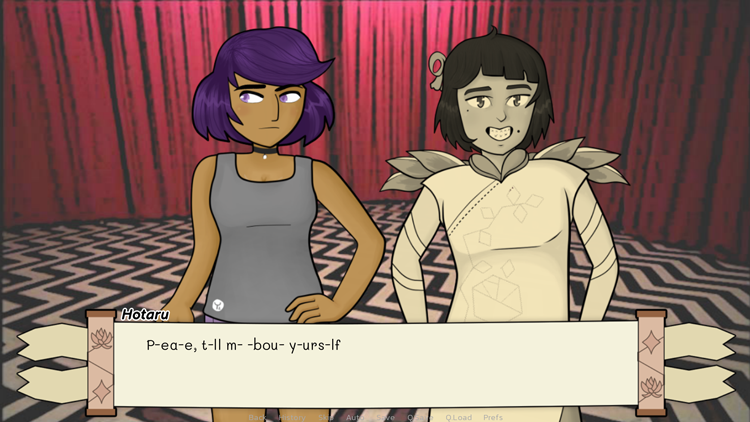 'It Was Always About You' (or, 'The One Where Hotaru Watches A Girl Die') is a story about how we isolate ourselves while dealing with grief. But more importantly, it's about magical girls (slash other magical people), chess, and REALLY wanting a cool sword.

Hotaru Yang, ex-shock-jock, current college student, and future magical girl, has been pretty good about severing all of her ties with the outside world. The less people that know her name the better, thank you very much. But one day after witnessing a tragic accident involving a monster, a wedding dress, and a mediocre pot brownie she finds herself intertwined in something that goes deeper than she would have thought.

Now the intimidating girl she has a crush on is a knight and the TA from her math class is... Well... Some kind of medieval archetype that's harder to put a name on? (Like an adviser? Or the guy in Aladdin with the parrot, but less evil? Probably?) And she finds herself in the regrettable position of having to care about others. Or even more terrifyingly - others caring about HER. 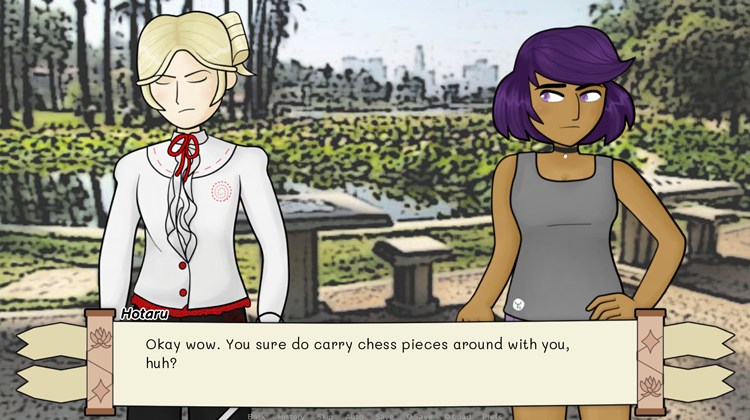 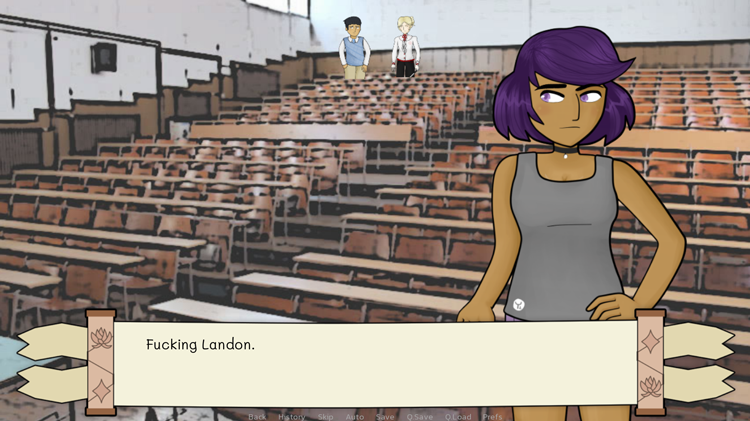 There's some shit going down. The story contains: Drugs (marijuana) and alcohol (MBikes's Hard Lemonade), depression (and similar topics that will be more specifically outlined as they come up), and familial death. 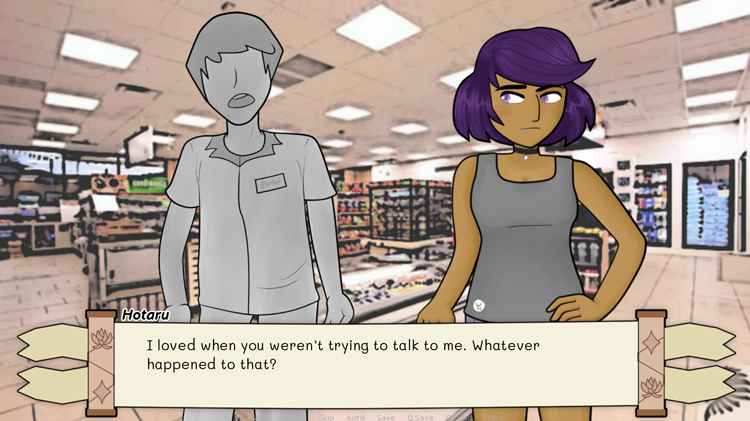 Hi! I'm Autumn, you can find my gamedev twitter here. I make a bunch of games, varying from tabletop to digital. This is one of them! After doing approximately a million jam games I figured it was time to release something that I could spend more than a weekend on. I'll be doing what I usually do, which is project management and whatever anyone else won't do (programming, art, marketing, you know!).

My co-creator is Andrew, you can follow him on twitter here. He also makes game jam games. He helps with writing and is going to do backgrounds and various other art odd jobs. Maybe programming too? Small teams with multiple people with multiple disciplines are weird!

We're both pretty busy with irl stuff, so progress has been slow (but steady!). Nevertheless, it seemed like a good time to make a thread. Hope yall are ready to play some chess (both socially and literally).
Last edited by Autumnotopia on Fri Dec 03, 2021 7:31 pm, edited 2 times in total.

Re: It Was Always About You [Magical Girls] [LGBT] [Gallows Humor]

Since I'm doing some deep dives into customizing stuff (well, probably not that deep, it just feels that way since the documentation is at times a little light) I think I'll use this thread to walk through my thought process and code a bit so that if other people are looking for examples of stuff maybe they'll stumble upon it.

So, I was thinking about a couple of ways to add 'juice' to the experience. Juice, in this case, being little things that just makes the game feel a little cooler. I thought that a way to emphasize sprites as they're talking would be nice, so I started to think about ways to do that. Some VNs have the character jump or flash when they speak, but I ended up deciding on just having the character sprite 'grow' a little while speaking, then shrink when they're done.

Initially I did this by writing transforms between each section of dialogue.

I did this for the two lines shown above, realized it was unwieldy, then forgot about the idea for a month. While reading on the forum, I saw someone bring up subroutines. I was like 'okay, that seems a little more like what I want', so I went back and made a subroutine that took the characters name and their position and slightly automated the previous code.

I went ahead and started implementing that, this time I got about two scenes in before realizing, just like before, is was still too much.

At this point, I realized I was just going to need something that happened automatically between lines of dialogue. Even one line of code between each exchange was too many. So I went back to the Google mines... I saw a couple of things from that that seemed promising. The first thing I saw was character call backs, but for some reason at the time I didn't view that as elegant enough I guess (more likely, I was just kind of overwhelmed and it seemed too hard to grasp at the second so my brain blanked it) so I looked at the speaking config variable. The config.speaking_attribute option (which seemed less intimidating at the time, since it was just a single variable. How scary can a single variable be?) would make it so that when a character was saying a line, it would find an image with the correct set of words (in the example below, I used the attribute 'pulse', then had a sprite that was the characters name + pulse. So 'landon pulse' would be the image that it looked for when Landon was speaking)

This seemed kind of promising. I went ahead and implemented it and ran through a few scenes. It mostly looked good, but as always, there was something not to my liking. I had it set so that it would enlarge the sprite, pause for a fraction of a second, then shrink. So if a character had multiple lines of dialogue in a row, they'd kind of just keep pulsing. I thought this was kind of distracting and figured I may as well keep researching... Usually with enough determination, you can achieve the effect you want.

Finally I went back to character call backs. I found this thread (which I must have absolutely seen before and just ignored the part about character callbacks. But it must have been the same thread I sourced the above code from since it's pretty much exactly what trooper6 recommended in the last post) and tested the code that Lord Hisu posted halfway through the thread. Obviously it wasn't exactly what I wanted, but it was close enough that I could see a clear path ahead of me: mainly what I saw and liked was that it had a memory and could determine when the speaker changes. So I knew I just needed to edit it so that it would make the character speaking grow when they start speaking, then shrink when the speaker changes.

After getting it in, I continued iterating on it. Mainly: Lumping in rudimentary 'mouth flaps' (Basically just making the character open their mouth when speaking, if they have a mouth sprite. Only Hotaru has one coded in right now, so she's the only one that gets that treatment), as well as a bonus variable (nonspeaking) that I could throw in to manually show a different sprite if I wanted (so if someone was supposed to have a mouth open sprite, but instead I wanted to give them a yelling sprite or something). I'm still in the middle of iterating on it, but it's finally accomplishing what I wanted! Which is always cool.

(Well, it's looped, so it's not a perfect representation. But it gets the point across!)

Anyways, sort of a long post, but maybe someone will find this in a google search and I'll have said the magic words that makes them understand what they need to understand to get the effect they're trying to get! Next time maybe I'll talk about my character layering system that's been similarly frankenstein'd from various posts around the forums

Re: It Was Always About You [Magical Girls] [LGBT] [Gallows Humor]

I took some time to put (most) of the sprites I have done together into a little posing tool that can be 'played' in browser. I wanted a quick way to help my dev partner and I try out different expressions, but also I figured it would be a good exercise to see where we may have gaps in our expression-base. In any case, it seemed like a fun thing to share so I figured I'd post it here as well! 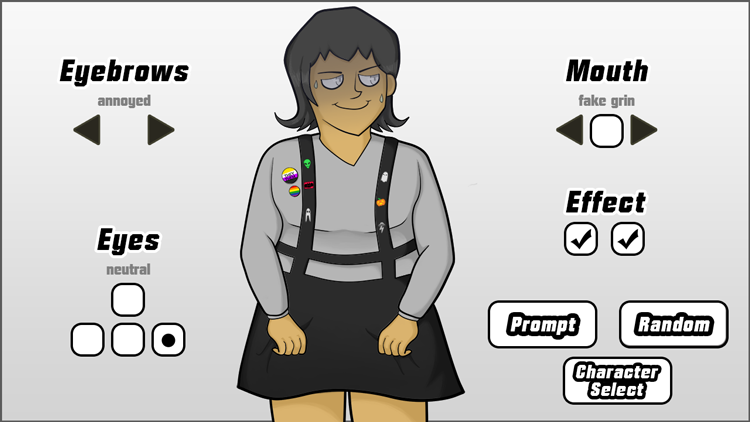 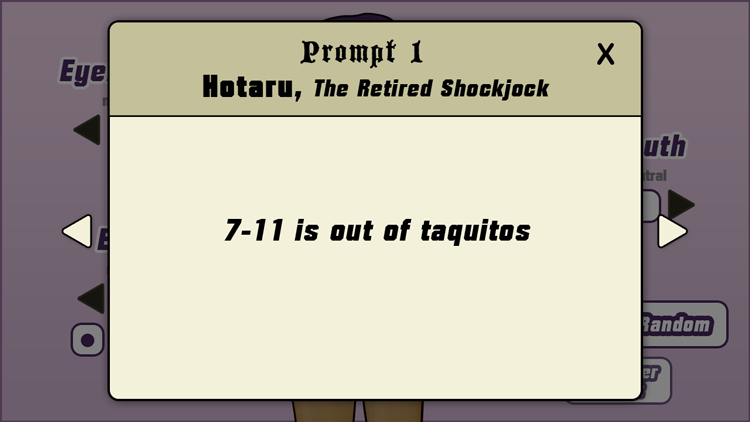 I've also programmed some chess in since the last time I've checked in, but I think I'll go over that another time.

A game about loneliness, chess, and fighting monsters with magic
Top
Post Reply
3 posts • Page 1 of 1