Ideas about my Map

Ideas about my Map

Hi, I'm making a VN which features heavy gameplay mechanics in the style of old-school merchant games like The Patrician (the first one). I want it to take place in a fantasy version of "totally not Earth", meaning that it should be reminiscent of actual Earth, but different. Reminiscent because the player can sort of anticipate what to expect and it makes the world believable, different because I can get away with plot and artistic freedom.

Before I go on, here is my current map: 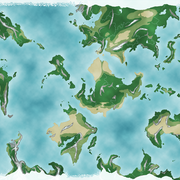 Huge, right? It's the whole world after all.
Originally, the map ended about where the southern deserts are now, but it bothered me that a) the equator wasn't in the center and b) there were two continents cut off by the edge of the map. So I finished the rest.
But I am starting to get the impression that this large of a map will overwhelm the player who can only be in one place at a time, with many places feeling and playing exactly the same unless I go out of my way to fill them all with story. Especially the southern continents make me wonder what to put there.

Now I was thinking of just confining the game to the northern hemisphere and give the planet a belt of land around the equator, acting as a natural border for nautic travel, and that would certainly solve a few of my problems, but I really like the shape my "antarctica" has. I could just flip it and put it somewhere in the north, but then its fjords would be at the same latitude as "Spain" and "France". So maybe scale it down?
I don't particularly like the shapes of the "Americas" either, so I could maybe put the southern continents there instead?

At this point I'm just "thinking loudly", and maybe your thoughts about this could help my creative process.
Crappy White Wings (currently quite inactive)
Working on: KANPEKI!
(On Hold: New Eden, Imperial Sea, Pure Light)
Top

Re: Ideas about my Map

In my experience, it's usually the UI/UX that causes players to become overwhelmed rather than graphics. I can't get a good sense how large each continent is supposed to be or how much there is to do. It's like thinking "I'm going to Europe" vs. "I'm going to walk 16 miles a day on the Camino de Santiago"

For example: the initial release of No Man's Sky was sprawling and overwhelming until you touched down on a few planets and realized the only difference was green grass and red sky vs. red grass and green sky. Compared to that, Breath of the Wild isn't even a full landmass and looking at the full map with all its markers is quite overwhelming.

IMO you should focus on developing the northern hemisphere first, since you have the most material for that. If you find you don't have enough content to populate another hemisphere, cut it out of the game. Don't make a continent when a town will do.

As for the landmass shapes... Maybe arrange it in consideration of how landmasses broke off from each other? Honestly it's so subjective that it's hard to give critique or suggestions, except to make a map that fits your content rather than the other way around.
Top

Re: Ideas about my Map

puppetbomb wrote: ↑
Wed Apr 29, 2020 10:06 pm
IMO you should focus on developing the northern hemisphere first, since you have the most material for that. If you find you don't have enough content to populate another hemisphere, cut it out of the game. Don't make a continent when a town will do.

Thank you, that's what I intent to do. Cut the southern hemisphere I mean. It irked me that in theory the character should get there by sailing just a few more miles, so I made a belt of land around the equator. Now the world looks much more manageable. As there was nothing that needed the southern hemisphere to exist, it was, culturally, largely a mirror copy of the northern one.
Crappy White Wings (currently quite inactive)
Working on: KANPEKI!
(On Hold: New Eden, Imperial Sea, Pure Light)
Top
Post Reply
3 posts • Page 1 of 1