NaNoRenO is an event where creators make a game from scratch during the month of March.
Post Reply
14 posts • Page 1 of 1
Message
Author

WELCOME to Aoi's space, world, utopia in which he called "Colors" despite being a colorless or plain white place.
But since he created this world, he can name and modify it to whatever comes in his mind.

He believes he is alone in his own world and no one can enter it other than Aoi himself,
but one day there appeared an energetic boy covered in bandages much to Aoi's astonishment.
But there's more to it.
The boy knows Aoi, but Aoi doesn't know him.
However, the boy just introduced himself as Aoi's "friend".

Yet, Aoi claims he has no friends. AT ALL.

His "peaceful" life suddenly disturbed by an unknown boy.

Who is this boy?
How does he know and relate to Aoi?
More importantly, how did he enter Aoi's utopia?

This is Aoi, our little protagonist who has quite a temper.

And this is mysterious boy (can't reveal his name yet), who always somehow manages to annoy Aoi.

ALL PROGRESS WILL BE POSTED HERE.
But will update this thread from time to time. :"D

I will totally kill myself for doing two projects at the same time but anyway.

I switched to a simpler style and setting for Colors so I'm pretty confident I'll finish it in time.
I just started doing the characters, but only with base renders. I already have the story in my head though.

Nadirah was supposed to be my NanoReno work but due to lack of resources, it's currently on hold.

Incolore was my second choice but I started before March even entered, so it's a no-go for NanoReno.
Last edited by ppppantsu on Sat Mar 08, 2014 9:58 pm, edited 6 times in total.
FACEBOOK | INSTAGRAM | KO-FI
Top

Doop doop hello again X3. As always your project looks great. I am especially interested in this one because I love stories about friendship C:. Plus I like kids. All the designs are super cute too.

Googaboga wrote:Doop doop hello again X3. As always your project looks great. I am especially interested in this one because I love stories about friendship C:. Plus I like kids. All the designs are super cute too.

Good luck on all your projects ^^.

I just wish I can make it because the timezone in LemmaSoft is a couple of hours earlier than mine. >A<;;;
It's a bit confusing sometimes- I might mess up the dates if ever.
FACEBOOK | INSTAGRAM | KO-FI
Top

Such cute art! I look forward to seeing your progress. ^_^
Top

The plot seems interesting enough and the art is just too adorable. I'll be waiting for the game to be released cause I really want to play it.


Puchin wrote:Awww, it's so cute! Want to see more about them already!


try10 wrote:The plot seems interesting enough and the art is just too adorable. I'll be waiting for the game to be released cause I really want to play it.

So I am done with the sprites and their expressions,
I'm also done with the BGS (really simple BGs), but I might add some more, especially towards the end.
So I am off to do the bonus materials. >w<

The GUI's done yesterday too, and

This project will be reeeeeaaaallyyyyyy short~~~~

Here's the final look of the characters and some tiny bits of info. 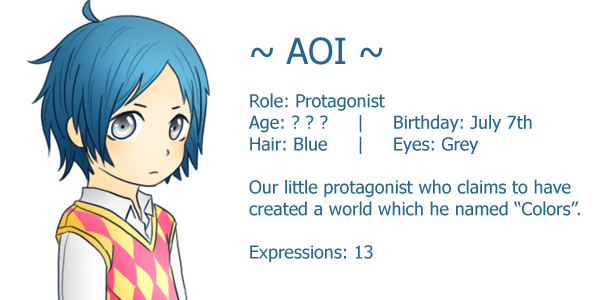 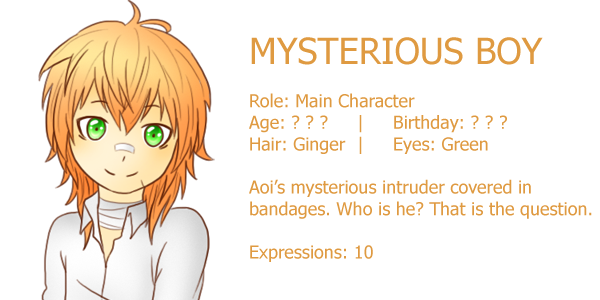 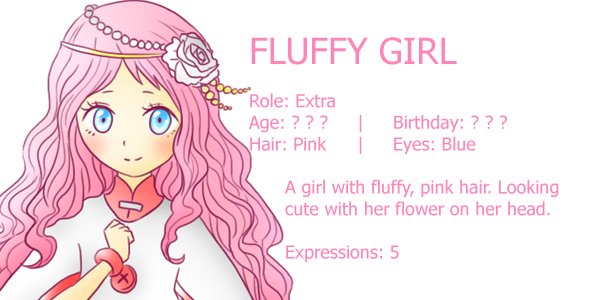 Everything's cute. I want to befriend all these colorful kiddies. Good luck ^^ I'll be waiting!
HIATUS:
[A Simple Act]
[All the Pretty Flowers]
[The Texture of Love]
Top

Hazel-Bun wrote:Everything's cute. I want to befriend all these colorful kiddies. Good luck ^^ I'll be waiting!

more info about the endings here

I forgot to actually post some teeny tiny screenies. >w<

also, to demo or not to demo?

LOAD/SAVE SCREEN
I didn't change what was in the template anymore since it already looks okay :"D

I think I would like to play the finished project when it's released, so no demo for me.

I like the plot it's interesting and mysterious ! I want to know more about the "friend" boy :3
And Aoi design is so cute >_<
Good continuation !