a kinetic novel collab from Paper Stars & DLS
STORY: This is a tale that takes place in a world where magic thrives and the strength of friendship is tested.

Brisa, a blackbird who can shapeshift into a human girl, has been traveling for a few months with her long lived warlock companion, Zephyr, a mysterious man who fulfills odd jobs around the continent with his magic. While she is content with wandering with her friend, Brisa still wishes to regain her lost memories since she cannot remember anything prior to meeting Zephyr. Their travels lead the duo to Whitehaven, a city on the verge of a conflict in which Zephyr will try to curb the massive damage that will most likely ensue. What Brisa isn't aware of is the unraveling of her past is about to play a part in the larger picture...

BRISA: Our protagonist; a blackbird that can shapeshift into a human girl and suffers from missing memories. Brisa is a rather blunt and sharp-tongued individual who doesn't like staying still for long and prefers to keep herself busy. Her attitude and behavior towards most things can be described as childish although she's more observant than one thinks. She treasures Zephyr strongly as he was the one who freed her from captivity.

ZEPHYR: A warlock who seems to be well-known around the continent and goes around doing odd jobs that require a magic touch (or a big magic shove). He is sought after for his skills and due to the scarcity and elusive nature of magic users in general. Outwardly, Zephyr appears to be a cheerful and flirtatious goof all the while being a brother-figure to Brisa. The blackbird notes that sometimes he has a habit of not admitting what's really on his mind and seems to be suffering from some sort of guilt...

ANIL: A kestrel, who can shapeshift into a human like Brisa. Anil and Brisa first meet in Whitehaven and for some reason he recognizes her and is immediately suspicious of the blackbird and of Zephyr. He appears to be a loner, preferring to keep to himself and observe humans from afar instead of engaging with anyone. Beneath his cold and aloof behavior, there is something sage and even warm in Anil that starts to emerge as he gets to know Brisa, taking an interest in her friendship with Zephyr.

OKAY wow, haven't written a WIP thread in so long. This will be my first NaNoRenO and hell, the first project I'm putting significant work on in years along with pyopyon as the writer! I may need help on programming sooner or later, but everything else has a solid outline. Even if I don't make the time limit, I will use this year's NaNo to push myself into making this KN and will continue to do so even after NaNo ends. I'm happy to make VN art and I hope everyone else will enjoy this simple (sorta) story. As for WIP you can keep track of this thread or most likely you'll find sketches and in progress stuff on my Twitter and my art Tumblr.
Last edited by MaiMai on Fri Mar 28, 2014 5:10 pm, edited 7 times in total.

Whoo~ so excited to work on this project, as this is my first NaNoReNo as well.

Thank you for letting me be on board-- and I am extremely excited to begin working on this project straight away!

Wow, a bird protagonist? I have to say, this sounds pretty awesome and I'm definitely looking forward to this!
How much of her as a bird will we see?

Ophelia wrote:Wow, a bird protagonist? I have to say, this sounds pretty awesome and I'm definitely looking forward to this!
How much of her as a bird will we see?

Quite a bit actually. I'll have to draw a separate bird sprite for her as part of the workload, but probably after I work on Zephyr and Anil's sprites.

Updating with content. Story writing will start tomorrow and Zephyr's sprite has been roughed out. 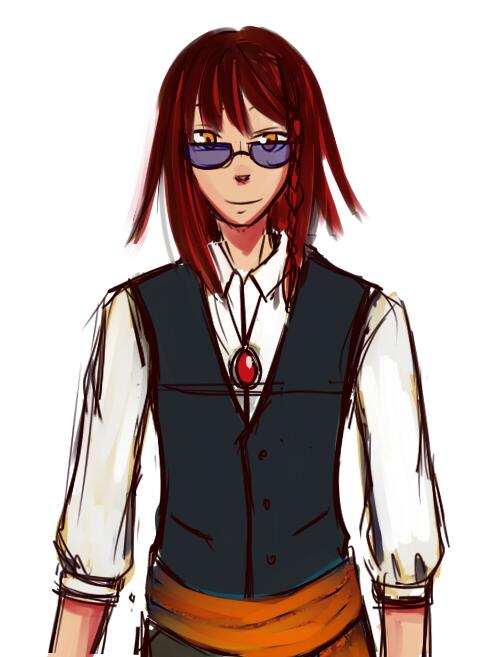 (fun fact, he is a very deliberate expy of an older character of mine

Oops, another update, 95% done with Zephyr's sprite! I just need to do one more pose and several expressions, but I'm set to work on Anil next.

Ahh, so excited to see more work by you! The art looks lovely, and the plot sounds interesting. Looking forward to this. ^o^
sakevisual visual novels (and stuff) | sakevisual dev blog
Top

Saw this on tumblr and everything looks great so far ^^ Can't wait to play!
HIATUS:
[A Simple Act]
[All the Pretty Flowers]
[The Texture of Love]
Top

I have to say, I'm really looking forward to this. The concept sounds really interesting and fun (woo, a non-human protagonist!), and I love friendship stories.

Just a note: kestrel, not kestral.

I wonder how a bird of prey like Anil will get along with a tiny little blackbird. I'm expecting him to refer to eating her at least once---though of course he can't because they're both human. (I assume Brisa's and Anil's natural habits will still be present in some form.)

Best of luck with the project!

@sakevisual: Thank you for your kind words. Coming from you, they really mean a lot.

@Hazel-Bun: Thank you! It's been a while since I've done VN sprite work, but I'm doing okay so far, especially since I'm coloring only on one layer. (Expressions and the lineart are on different layers of course)

@Mad Harlequin: Oooh, thanks for catching that for me. See, this is why I need a writer.

And to answer your question, yes, some of their animal/natural habits are intact when in human form, but as for how it plays out... Well, it'll be interesting hopefully. c:

I've been astonishingly quiet for no reason--

As far as the question of using their natural habits in human form, for the most part you'll hear lot of language that a bird would be more familiar with from Brisa's end-- little things like calling human children 'fledglings' and the like. In addition, Brisa doesn't really eat seeds and insects in her human form because they're too small to be filling, but she does enjoy fruit regardless of what form she's in.

Although Anil is a bird of prey, he's not much bigger than Brisa is so I don't think he'll be eating her XD If anything Anil might have to more to worry about, since I read that female Blackbirds can be more violent then their male counterparts. Doesn't mean they won't peck on each other, though.

(pats self on the back)

In any case, it's pretty fun to write, haha!

I am oddly interested in this, if only because I like the outfit Anil is sporting.
Have you queued into the ACELINE yet?
Top

I'm having a little trouble figuring out Anil's color scheme, but things should get done today.

Just an update to let people know that this project is still on, but I haven't been able to do art assets due to putting university work as a priority over NaNo. I mean, only 6 days left, but there's nothing stopping me from working on this after NaNo is officially done.