Where We Lay Our Scene [NaNoRenO 2016] [Commercial]

Where We Lay Our Scene [NaNoRenO 2016] [Commercial]

Where We Lay Our Scene (WWLOS) is a visual novel being developed by Cyanide Tea for NaNoRenO 2016. Auro-Cyanide is doing the art and graphic design while Lorelei is handling writing, programming, and sound coordination. The game will feature four character routes and will have 13 different endings. The game will be commercial with a price that we'll announce at a later date. It will be distributed via itch.io and possibly Steam.

S T O R Y
Christian Marino has become a household name, what with his face and body always visible when you open a magazine or look out your subway train window. But now famous model Christian Marino finds himself at a crossroads. What will he do with his life once his well-known and much-cherished looks fade? Is there even anything more to him below the surface that everyone else sees? As he considers these issues of future and identity, he’s suddenly cast as the lead role in a film based on a bestselling novel. With fresh new challenges to face in an unfamiliar environment, this just might be the solution Christian was looking for—to more problems than one.

The main theme for this game is crossroads. Rather than having "good" and "bad" endings, each love interest has a friendship ending as well as romantic "A" and "B" endings. Neither romantic ending is meant to be better than the other. 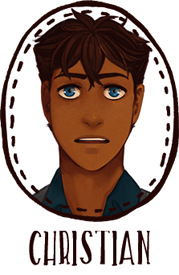 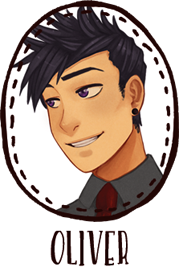 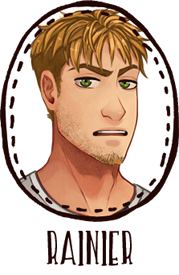 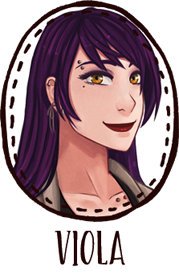 Christian Marino (25): The protagonist and a famous model who's acting in a movie for the first time. Despite his star status, Christian's quite level-headed and down-to-earth. He possesses something of a dry wit and is very much aware of his good looks. He isn’t vain, but his confidence can come across that way and his peers sometimes complain that he ought to be more humble.

Oliver Wong (23): An up-and-coming novelist whose recent bestseller is being turned into the movie that Christian and Rainier have been picked to star in. He also wrote the screenplay, so he’s constantly on set. A suave type who is very articulate and used to people fawning over him, Oliver's tactics don’t work on Christian which is a source of confusion and frustration for him.

Rainier Laurent (28): A perfectionistic and hardworking actor. Up until now, he’s always been cast in supporting roles and told that he isn’t leading man material. Though generally a friendly guy, Rainier looks down upon Christian for being a model and relying on his looks/connections to get ahead and is unfortunately quite nasty to him. (his name is pronounced REN-yay)

Sacha Laurent (30): The CEO of a restaurant chain that grew from a single restaurant that she opened. She caters for the film staff and is also currently in Milan on business. Sacha is Rainier’s older sister but isn't at all in touch with pop/celebrity culture. Bright and driven, she gets excited when discussing the culinary arts or eating delicious food.

Viola Ferrara (26): A skilled stylist and make-up artist. Viola is Christian's personal stylist and closest friend. She was once also a famous model, but left the spotlight just before coming out as transgender. A kind person, she's nonetheless a little jaded because of her experiences and will not hesitate to kick someone’s butt if they’re being ridiculous.

We'll be keeping this thread updated as we work, but you can also follow both of us on social media to see more. Lore's also doing a premium daily-updated blog for NaNoRenO 2016 and you can find out more info on that here. Thank you so much for your interest and good luck to everyone else participating this year!
Last edited by Camille on Wed May 04, 2016 12:06 am, edited 3 times in total.
1/2 of Cyanide Tea | Portfolio/List of Works/Contact
Top

Oh I love this idea ahh
Sacha's personality is so adorable and she's older. Uh, yes I have a this for older female love interest oops
And Viola ! She's an interesting character too, I'm going to keep an eye on her :0
Usually Rainier would be my type actually but I guess everyone are so lovely, especially the ladies! Good luck with the game! I know you guys can make it happen. I'll definitely gett it when it's out c:
status: zzz

@Josie, we're glad you like it! I like having older love interests as well so I think this is nice~

Hello everyone! I'm super excited to be back for my sixth Nanoreno running! This is one of my favourite times of the year and I hope everyone has lots of fun over March! It's time for me to begin my annual spamming spree of art assets~

I've started working on the UI for the game, hoping to mostly get it done tonight so I can start the sprites tomorrow! As always, this looks very promising, and I already can't wait to know more and see more of it! The cast looks really good and I love how the character aren't idealized (the best author, the best actor, the best etc), they seem to be flawed and yet very interesting because it makes them all the more realistic (besides they seem to have real, strong and well fleshed out personalities!

It's really great that there will be no "true" end or no "bad/good" end, I'm a bit fed up of the manichean way most visual-novels work, so doing Friendship/Romance endings is a really interesting fact, well thought!
The UI is very clear and neat, well done! (I'm amazed at how quick you are!!!

)
I wish you all the best on this NaNo, and really awaits for the game to take shape!
Hidden Masquerade

@Didules, Thank you! I'm sure Lore will be very happy that you like the character's so far from their bios, she's worked very hard on concepting them. We are big fans of this other than just good/bad endings and it seemed to make a lot of sense with how the characters turned out.

Hahaha, I've done quite a few UI now so I've gotten pretty fast at them. Though design wise they are never perfect when I'm doing them in tight deadlines, not enough time to think.

I have to go to bed since work tomorrow but I took care of the main chunks. I have a couple bits and pieces to do and clean up the files but I should still be able to start the sprites tomorrow as planned. Tomorrow I will start with Christian since he is the main character. This was the original concept art I did for him, though he's changed a little bit since then. Gorgeous looking UI and the story sounds cool. The cast all sound interesting and I like the idea of varied ends without any being more 'true' than the others. I'll be looking forward to this one!

I love everything you guys do, so I can't wait to see what you come up with this year. Also, Christian is too cute and I totally want to romance the protagonist >.>
Top

I'm looking forward to this work! The cast of characters look great (Viola and Oliver in particular) and Auro's art is just going up and up!

That art and GUI are treats to the eyes, and I can smell the amazing writing in the horizon. Even though it'll be commercial, here's hoping for the game to come to fruition~
Top

The GUI looks cute! Good luck!
(I prefer not looking at the story cause im lazy hahah

As usual, I love your guys' nanos and I really love the setting and the slightly-older characters this round.

I just wanted to cosign what everybody else has been saying about the UI. I love it!

Romance games aren't really my thing, but I'll definitely be following this one because I'm curious to see what the process is like for a group that's done NaNo so many times.

My burning question: How skilled is Christian at Blue Steel? (Or is he too levelheaded for that?

@ KiloTango, Thank you! We try to make sure our casts are pretty fleshed out since it makes them more fun to work with. We also like the idea of exploring different types of endings, life doesn't have just good and bad after all~

@ yoshibb, Wah! Thank you for your support! Hahaha, you and Lore are in the same boat then XD I must admit I had a 'on no, he's cute' moment when I designed him.

@ fuicchi, Thank you for the praise! Both Lore and I will work very hard to make sure everything is finished on time~

@ YzzaPizzaIsCheezy, Thank you very much, I'm glad you like it ^_^

@ Kitty and Deji, Hahaha, thank you you two XD Let's all work hard!

@ YossarianIII, Thank you very much! We hope we can provide some insight into how we work, though I think we tend to take some stuff for granted these days hahaha We've worked together a fair bit now, our communication is pretty good. Oooo, hmmmm maybe he's too cheerful for that, maybe he needs his own one XD Good timing since Zoolander 2 is coming out lol, seems like forever ago

I've finished the UI yay!!! Now I get to start painting this guy~ I'm aiming for a painterly style this time like this test I did. I've used something like this before for The Elevator and Taarradhin, but I've never done multiple outfits before so it will be a learning experience!