The game has been released! The new thread is over here.

Share your hopes, insecurities, and favourite albums as you navigate an online friendship between two isolated high school students.

Brandon is a recent transfer at his high school, having been torn away from his friends and hometown upon his parents' repatriation to Hong Kong. He's understandably bitter about it, and vents his frustrations on his blog for the world to see.
Players take on the role of Sam (appearance & name changeable), a student with an eclectic taste in music and not a lot of friends. By chance, Sam comes across the blog of Brandon -- who loves all the same bands and lives in the same town...
What could it hurt to add a stranger on messenger? He can't be worse than anyone Sam already knows. 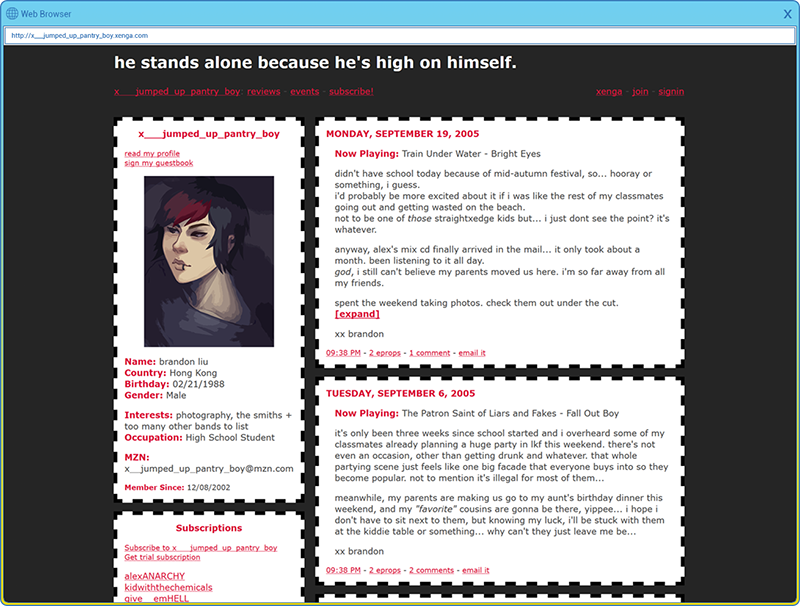 so obscure; is a visual novel played through the interface of Sam's computer.
The majority of the game's story is told through a series of chat conversations.
The game has one route, with four endings planned.

Hello, we're STARDUST★SODA!
We're back for our third NaNoRenO. (Even though last year's got a little out of hand due to grad school/work, and ended up getting released in the summer.)
We'll try our best this year, though we intend to continue working on this even if we don't make the deadline.
Feel free to follow our development on our twitter. We're currently looking for testers! Please either PM me or contact us on twitter if you're interested.
Last edited by PeroxidePrince on Sat Mar 31, 2018 2:32 pm, edited 4 times in total.
STARDUST★SODA
Cooked with Love • so obscure; • LAST CALL • Reflections on the River
Top

This looks great so far! I love the art, and I always love playing games with the "old computer interface" concept, haha. Your team's NaNoRenO entries are always so excellently distinct from one another and extremely well put together -- I'm really excited to see your work this year! Good luck!
Top

Yessss, it's great to see Stardust Soda back this year! This project looks amazing. ^_^
hey hey I made a thing
Top

@arcadeparty: Thank you! I don't think we actively set out to make our NaNo projects different each year, but I guess we just end up doing that since it feels safer to try new things for a small project, haha. It's always a lot of fun though, so I'm looking forward to working hard on this project this month.
@Zelan: Thanks! I basically only return to LSF for NaNo lately, haha... Whoops.

I've mostly been working on writing the past few days after getting the UI sorted, so there's not much to show. I have a feeling that's going to be a large portion of the updates throughout this project since it's less asset-heavy than our previous projects...
Here's a gif of the "setting up your profile" part at the beginning of the game though.
While parts of the player character's personality and backstory are set in stone, the player can name the character, set a screen name, and choose from four (very 2005) profile pictures.

Whoops, been pretty bad at posting regular updates this time round, but we're been working pretty steadily on this.
We're making pretty good progress on writing -- over half of the game's script is done now, and scenes that are done are being put in as the rest are being written.
As far as the art assets to-do list goes, it's now just a list of "would be nice but not absolute necessary" things. I've finished all the important assets that we'll need, but most of them are kinda spoilery so I can't show much unfortunately!

Here's a screenshot of what the chat interface looks like in the game: 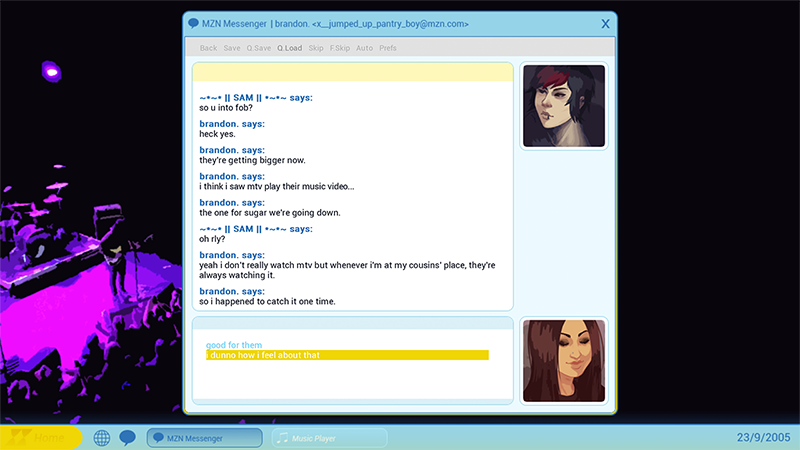 You've captured perfectly what it's like to chat over the internet with that dialogue. I mean, wow.
hey hey I made a thing
Top

I love the UI! I am such a sucker for text-based conversation & relationship development. This looks so cool. ^^
Dating Sims meets Horror, Beyond You!
Artist & Writer & Coder & Overachiever for Mistakes Were Made.
Top

@Zelan: Haha, glad to hear it. It's been a little more relaxing working on this because we can be quite lax with spelling/grammar lmao
@SlimeBunnyTV: Thank you! Yeah, the leading idea we went with for this project was just that we wanted to make a story told through texting/instant messaging and we just came up with plot/characters/everything afterwards haha.

Update
Short update, since it's just mostly been plodding along with writing/programming which is going along smoothly.
I'd estimate that writing is about 70% complete at the moment, and about 40% of the game's content is programmed in now.
Here's a screenshot just to make this update look a little less sparse: 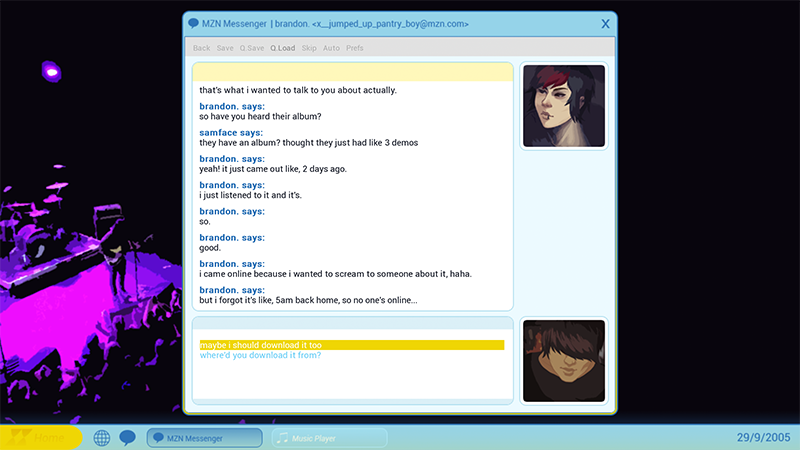 Update
Popping by with a quick update: the script is pretty much complete and most of the scenes have been put in the game; it's mostly just editing and fine-tuning things now.
We'll probably start looking for testers to test next week -- please feel free to PM me or contact me on twitter if you're interested!

Here's a screenshot, presented without context: 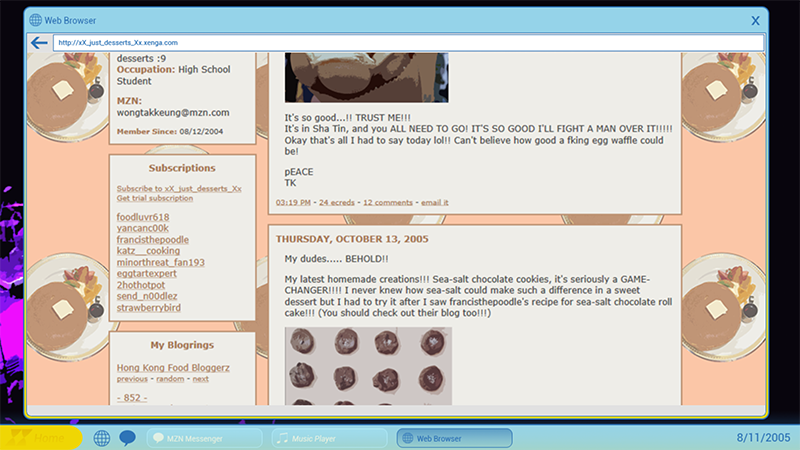 Re: so obscure; | Slice of Life/Friendship | NaNo18 | Looking for Testers!

Update
The game is now more or less complete -- just doing some tweaks like changing music around for different scenes and putting together the extras menu.
We've already got a build with all the content ready to test, so if anyone has the free time to volunteer to help test the game it'd be greatly appreciated! As a tester, you'll just be proofreading, and maybe answering a few questions we have.
If you're interested, you can either pm me or contact us on twitter (@cavalrycaptn or @stardust_soda)!
STARDUST★SODA
Cooked with Love • so obscure; • LAST CALL • Reflections on the River
Top
Post Reply
10 posts • Page 1 of 1