NaNoRenO is an event where creators make a game from scratch during the month of March.
Post Reply
46 posts
Message
Author

Once every millenium, Sun holds a huge gathering of the planetary spirits. While Sun has found herself down in the dumps recently -- including a relationship with Terra (Earth) that is on the rocks and what she now considers a largely mundane, solitary existence -- she hopes that the get together will brighten things up. However, after Terra ruins her event with his reckless behavior, Sun decides it's time to play the field and chooses a new planetary partner.

A lot of them obviously! Based off their real counterparts:

Sun: The life force for the entire solar system, so she's very warm and loving. She loves these parties because she gets to spend time with everyone since the majority of the time she feels distant and lonely. She has no other stars to relate to and most planets see her as royalty rather than a friend.

Mercury: Male; has trouble relating and making friends, has mood swings, and covers up majority of body to hide scars, most scarred of planets (covers them up with his clothes), can be kind of dense

Venus: Male; rotates in opposite direction (likes to be different), self conceited, thinks he's extremely attractive, flirt, and is the only other planet that dated Sun (And his planet ended up becoming a poisonous wasteland so make of that what you will >.>')

Earth/Terra: Male; Borderline self destructive at this point, Everyone believes he's blessed to be dating Sun but he sees it as a burden, being the only planet that can support intelligent life is an incredible responsibility that he's become exhausted with. However, he still loves Sun, so he's conflicted on what to do.

Mars: Female; Volcanic with large dust storms (easy to anger and tough), No magnetic field (doesn't really like anyone, nor does she try to make friends), eccentric orbit path (gets in the way of others), Mars probably wants Sun's blessing the most out of anyone though and so would be happy to see Terra and Sun break up. She is nicer to Sun than she is to anyone else.

Jupiter: Male; The big brother of the planets, especially to Terra. He was the one who originally encouraged nervous Terra to talk to Sun after her breakup with Venus. He can be a bit full of hot air considering he's the largest and fastest of all the planets. While he's always been kind, over the last few millenia, he hasn't been as thorough in his protection (Jupiter often blocks asteriods headed for Earth)

Saturn: Female; most moons (popular), longest time to orbit the sun (lazy), flattest planet (tall, skinny), rings (in the past, hurt someone who got too close and now she doesn't want to risk the same happening again)

Uranus/Ur: Male; Self-conscious about the name, Tilted strangely, rotates the opposite way (has glasses, is a clutz, and Venus accuses him of being a copycat). Feels like there's nothing unique about him and doesn't understand why Sun gives him attention.

Neptune: Female; A bully to some and idol to others would have the potential to become truly evil if left to her own devices, but at the moment is more misunderstood because most assume she's nothing more than an ice storm ready to unleash on anyone at the drop of a hat. Despite that, she does work hard for the outer planets, with one notable exception...

Pluto: Male; Of course feels very left out - Distant from Sun. Sun is nice enough to invite him to every millennia party but he tends to get bullied by Neptune and the outer planets (the outies gang) not included in the 9 official planets recognized by Sun. Cold but in more of a sad way rather than a sinister one. Actions can be unpredicatable, like its tilted and inclined orbit. Passive, small, and never tries to fight back against anyone who ridicules him.

Author Notes: I realize how big this project is so I started early on a few things including the sprites so I might be able to finish in a month. But considering the scale of this, we'll see how it all goes!
Last edited by yoshibb on Sun Mar 10, 2019 1:56 pm, edited 5 times in total.
https://twitter.com/Yoshebb
Top

My girlfriend and I read the title of this post and both gasped!
We love it already, the Title, the concept, it sounds adorable!!!
Keep up the good work we'll look forward to seeing more as the month goes on

Ooh, I love this! I think Jupiter is my favorite so far, but we'll see as we learn more about them!

NiccyNeko wrote: ↑
Fri Mar 01, 2019 12:31 am
My girlfriend and I read the title of this post and both gasped!
We love it already, the Title, the concept, it sounds adorable!!!
Keep up the good work we'll look forward to seeing more as the month goes on

Thanks! I hope it lives up to your expectations! Good luck with your project as well.

I'm glad you like Jupiter -- it's kinda my favorite planet, so I'll have fun writing his route!

Alright, to start off, here's our MC Sun. Sprites are almost finished, and I've just started writing the prologue. Let me know what you all think 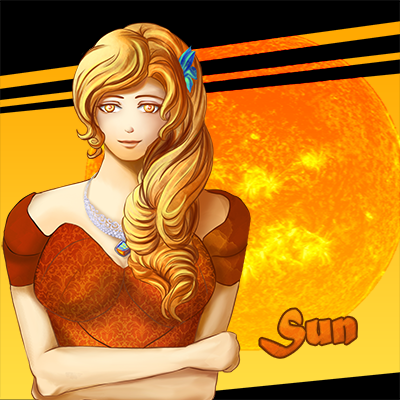 This looks and sounds amazing and so much fun! Will keep an eye on the game

Wow, I love Sun's hair! She looks like a fun MC. ^_^ This is a super ambitious project for one month, good luck!
hey hey I made a thing
Top

Thanks! I hope you'll enjoy it

Thank you! Her hair was definitely my favorite part to draw. Thankfully I have some writers to help me with all the routes cause otherwise I'd never be able to finish!

Writing is well underway and Sayumi101's GUI looks awesome. We all definitely made some great progress for the first day! I'm going to reveal the planets in chronological order starting with Mercury: 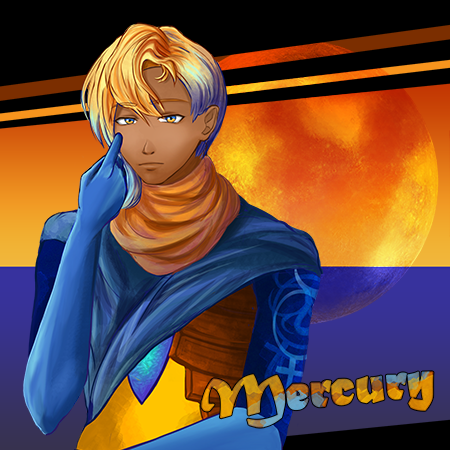 Sun's hair is just gorgeous. I love the multiple colors in Mercury's too Dx

Keep up the great work guys!

This looks like it could wind up being a really great game/story, and Sun looks SUPER lovely!

I'm probably the most interested in Mars, Terra, and Venus.~
*meow*
Top

I'm so excited for this! And I already have a favorite: Pluto! I also seem to like Jupiter (I tend to gravitate [heh] towards big brother types). Can't wait to see your progress ^^

I probably had the most fun drawing Pluto and Jupiter so I can't wait to show off their sprites! Hope you enjoy their routes when they are finished!

I'm probably the most interested in Mars, Terra, and Venus.~

I'm glad to see interest in Terra. I know he's not as mysterious as the others but I think he will have a really interesting route! As for Venus and Mars, I'm still searching for writers but I'd love for these two to get some attention.

Speaking of which here's today's sprite reveal, Venus. He's kind of a showoff but he has nice qualities... sometimes. 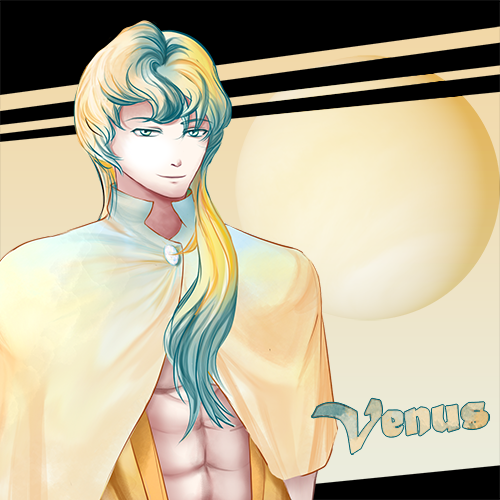 Hoo boy, once again I am digging the hair. And that face...his expression definitely gives me "showoff" vibes xD I love it. I hope you find writers soon!

Yessss I am so excited for this!
I think I'm most excited for Mars, Neptune and Pluto but everyone looks really cool so far.

minyan wrote: ↑
Sun Mar 03, 2019 6:59 pm
Hoo boy, once again I am digging the hair. And that face...his expression definitely gives me "showoff" vibes xD I love it. I hope you find writers soon!

The hair is usually my favorite thing to draw for almost everyone if I'm being honest. Since the planets all have a wide variety of colors I can have a lot of fun with it! And yes Venus is very proud of his abs among other things lol.


Ryuushiro wrote: ↑
Mon Mar 04, 2019 2:44 pm
Yessss I am so excited for this!
I think I'm most excited for Mars, Neptune and Pluto but everyone looks really cool so far.

By the way, this is a really big project! Do you plan on releasing the full thing by the end or nanoreno or just a demo?

Thanks! The plan is to finish the routes we have writers for. So right now, ideally it would be Mercury, Terra, Jupiter, Saturn, Neptune, and Pluto. The routes themselves won't be incredibly long but I know it's a big undertaking, which is why I started early on the sprites. Hopefully everything goes according to plan.

As for progress, I'm about halfway through the prologue at the moment and starting on introductions with each character. We also now have a background artist, Antizaba, who will be doing the backgrounds for Sun's palace in the prologue! Lastly, here's the next sprite, Terra, current partner of Sun... for now. He's been rather erratic recently and it's been effecting his relationships with everyone. 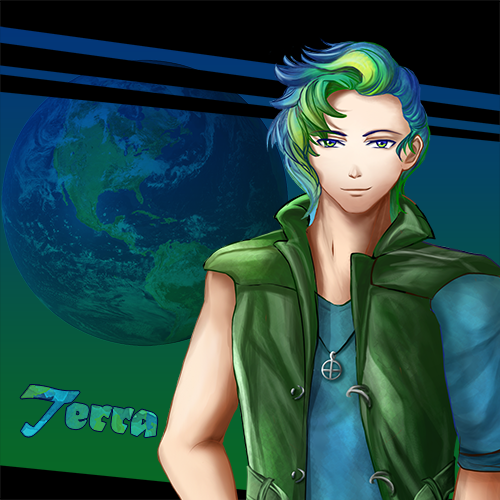 I don't know whether to stare at Venus's face or his abs. Haha. (But I'm not complaining.)
And Terra might just have the coolest hair I've ever seen. (I love the greens you used for it.