A support mage adventures with a spear-wielding dark elf, defeating slime monsters.
One day, he accidentally casts a monster-taming spell on his companion, making her more submissive, obedient, and sexual.
Will this accident drive them apart, or be the start of a new relationship for them?

I made Demon King Domination for nanoreno 2018, which is now for sale on Steam. It eventually lead to us making another game, which is Magebuster: Amorous Augury. It's no exaggeration to say that Nanoreno kickstarted our dev group.

This year, I'm planning to do another game with Kronifer as character artist again, along with a new background artist and voice actress. I'm gonna be doing writing, editing, coding, music, sound, and voice editing again.

The game is planned to include:
We plan to make as much of the game as possible for a Nanoreno demo, then polish it up, add more content, and release a full version on Steam in April.

Once the jam starts, I'll post brief updates every 3-4 days or so on this thread, Patreon, and Twitter.

Good luck to everyone else participating in Nanoreno 2019! We're gonna do our best, and you should too!
Top

This sounds rather interesting. Best of luck with Nano.
Frameworks & Scriptlets:
Top 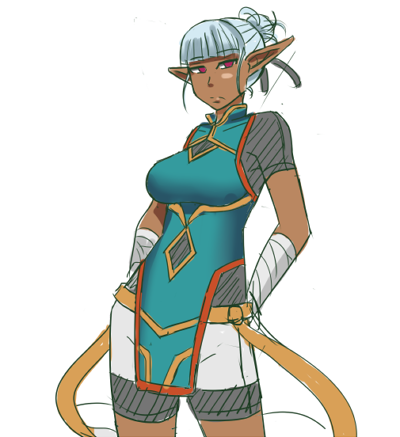 4 days in, and we're working hard on the first parts of development! We have about 1/3 of the game script done, and we have sketches of all the main CG. Not a lot of presentable work for now, but there will be more later.

The image above is still a work in progress for the heroine design and pose. She's gonna be the short-spoken kuudere type.
Top

Apologies for the lack of updates, but the last week or so has been exclusively spent on the game script. I've also been busy with other obligations.

Production is a bit behind schedule, and as a result, we've made a decision regarding the game, and will only release part of the game for Nanoreno. We will produce everything for the common route and the first of two ending routes, and will add the second ending route for the game's final release, which will coincide with the game's launch on Steam.

We apologize, but this game needs a little more time, and it's become a bit larger than we first anticipated. It might release later than expected.

On the more technical side of development, we've produced a full first draft of the game script for the first route, the one we will be releasing for Nanoreno. The script is now in the process of editing and refinement, which should lead to a final draft in the next few days. After that, the script will get sent to the voice actress to record, and we'll be ready to start coding.

I have also started work on the game's soundtrack, which I will hopefully be able to share progress for soon.

Background art is probably the element of the game that's seen the most progress at this time, thanks to the help of OneSleepyDormouse.

I hope to drop some more substantial updates soon, with character art and assets.
Top

Big apologies for the silence again. I must again stress that this project is slightly behind schedule, even up to the very end. I am working as hard as I can to finish up the build I have in a presentable manner, and I've opted to focus on that as opposed to making early public previews for the most part. There are still many improvements and additions to come before the game is formally released as it's final version, though.
Top

Unfortunately, this game didn't make the deadline, and wasn't released as part of Nanoreno 2019. We just didn't have enough time to finish up, and I don't want to push out an unfinished, subpar product just to meet the jam requirement. Instead, i'm going to be holding back and releasing the game later when it actually reaches it's final version.

Working on this for the month was fun, and I don't regret doing any of it, though.

Elf Enchanter will be coming to Steam in July! Wishlist it now!