When a mage turns sixteen, it is tradition for them to publicly announce to the world what branch of magic they will enter a study of. As the heiress of a particularly wealthy family, for Lethe this means a debut party inviting the most powerful mages in the region. It's a little nerve-wracking, and there's a lot to prepare for, but at least she has one thing figured out: the answer to the "big" question. Obviously, she wants to follow her family tradition of necromancy.

But as the last few weeks before her sixteenth birthday tick away, she begins to realize the answer to that question isn't perhaps as simple and straight-forward as she thought. It is not merely an asking of what she will study, but the other mages of high society are also wanting to know what such a choice will mean to her. What will she use the power to raise the dead for?

Deadbutante is a short visual novel about a young girl and what kind of necromancer she'd like to be. Will she follow exactly in her father's footsteps of reclusive research, or will she choose another path? Your options will be presented to you in the three weeks leading up to Lethe's sixteenth birthday, but most of your actual decisions will take place during the party itself.

Your choices will also affect another character, Harris--a childhood friend of Lethe's who will also be making his public declaration of mage-hood soon, though he's a lot less certain of his path than she is. He's optionally a love interest as well.

Important guests at the party include: Roseabelle Pheonik, the fiery governor of the region who has a very strenuous relationship with your father, and Lucian, the high priest and Harris' uncle who actually rather likes your family on a personal level regardless of what he tells his flock about the threats of necromancy.
Top

Oh my gosh you're doing NaNo this year!?! I'm literally right in the middle of finishing my first playthrough of The Deep Unknown and I absolutely adore it, I've been gushing about it to my girlfriend for days now, so it's super exciting to see another project from you!

This is a really interesting idea, I love the focus on the divide between what you're doing and why you're doing it, that sort of thing really does make a huge difference and it's neat to get a look at the thoughts behind this kind of thing!

Super excited for this (love the title, by the way), and good luck on your NaNo!
hey hey I made a thing
Top

YES, bring on the necromancy!
It's neat to see you have the main character wonder exactly how she should pursue necromancy and what to use it for. Typically it doesn't exactly have a good reputation, so I'm definitely curious about the options she will have.
Top

This sounds like a really fun concept! I'd love to hear a little more about what kind of options there are for using necromancy in different ways. Good luck with the development process!

A visual novel dealing with the problems of studies? What could be more relatable! The fantasy setting and questions of necromancy are a great foundation for an interesting story. Apart from that, what's intriguing is the "optional [GxB]". It allows for there to be platonic and romantic relationships which is pretty neat!

An optional love interest! Yay! I love the premise of the VN. I think I'd want to know what Lethe's reasons are for picking necromancy as well. I also wonder what other paths there could be if she were not to choose necromancy for herself.

Thanks for the well wishes everyone

It's my first day off from work this month, so I finally have time to really put some hours into this.

It's a little difficult for me to give word counts since my writing program includes all my programming shorthand, but I'm going to estimate it's between 3.5 and 4k?? I'm already wincing at how much exposition dump there is, but meh, world-building makes the writing more fun for me, so bleh. Hopefully I'll have time to make it more elegant later, but for now, bleh, who cares.

I also had time to start on actual artworks today!
They still need some work, but these are the sprites of Bobbin and Lethe so far.
Bobbin, by the way, is Lethe's personal servant, chaperone, and general sounding board for whatever's on her mind. He's also super forgetful, making him handy for instigating those aforementioned exposition dumps XD 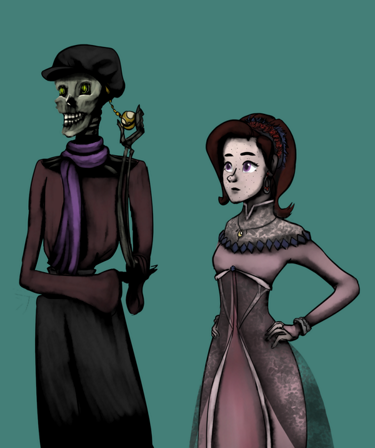 This sounds really interesting and I never really noticed how much this question needed to be answered: What will she use the power to raise the dead for?
Such an important one and I'm looking forward to seeing what she decides on! Plus the art is super nice! Lethe looks great and Bobbin looks like he'll be a really interesting character.

Thanks! There are a few different options for how she can use necromancy that combine in different ways. For the moment, I'm thinking there will be four main endings for how Lethe ends up using her necromancy, and each ending has different variants based on your interactions with Harris.

Today I finished writing a couple more scenes, worked on Lethe's expressions, and also got to work on Harris here. He's taken to wearing weird hats lately due to his prematurely graying hair 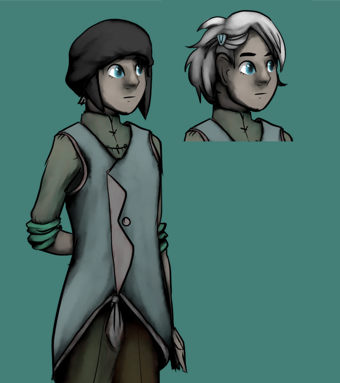 Ohh, necromancy... I think that's a type of magic you rarely see in the spotlight, especially handled in a thoughtful way. I'm very curious to learn more about those options and how Lethe's choice will be accepted by the other mages! The artstyle strikes me as very fitting for this kind of project as well and I like the fact that there's romance, but that it's only optional. Speaking of which, I wonder what's up with Harris and if this prematurely greying hair (and grey-ish skin tone? at least compared to Lethe's) mean something. (Also, I like his hairstyle! Someone needs to steal his hat so he can't hide it all game :'D)
Top

Ok I absolutely adore childhood friend romances, so that's got my attention. I think the art is cute as well and the story premise sounds really interesting! Can't wait to play!
Top

Almost done with the rough draft, I really just have a little more to go of the main story and then the endings and their variants. My fingers are crossed that I'll actually meet my goal of having all the writing finished by the 20th!

In retrospect, though, I really wish I'd set up the story points differently XP It doesn't flow well at all in my opinion, but it's a little late to change that XP Oh well. Maybe after March is over and if I'm not completely sick of it I'll rework the whole thing XD

I've sketched out some background stuff, but nothing I'm ready to show yet except for the main menu (which needs some tweaking too, but for now I'm just gonna say 'screw it' and I won't worry about it unless there's time to do so later): 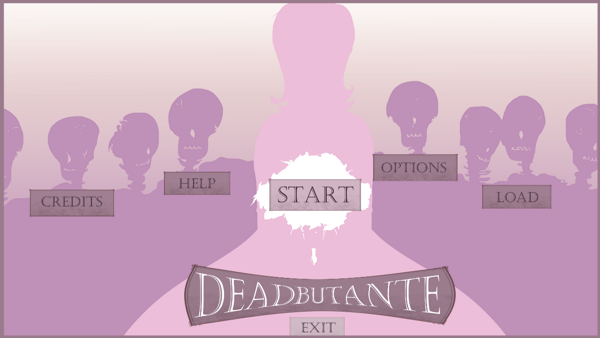 So the game is BASICALLY done: finished the writing and art, and just finished the programming a few minutes ago.

That said, I haven't playtested the whole thing yet, and I'm not going to upload it until I have (I know from experience it's gonna take me more than the <1 hour I've got before March is over to make sure it runs the way I want it to) . So while I technically won't be done within the time frame, I still wanted to let you guys know to keep an eye out for the game within the next few days

Congrats for finishing it!
I won't rush you because I'm sure all of us that participated could use a break, but I'm still looking forward to reading it! Take as long as you need to make sure it's running as expected (or as close to it as possible), and good luck with it!
Top
Post Reply
16 posts