A place for Ren'Py tutorials and reusable Ren'Py code.
Forum rules
Do not post questions here!

This forum is for example code you want to show other people. Ren'Py questions should be asked in the Ren'Py Questions and Announcements forum.
Post Reply
31 posts
Message
Author 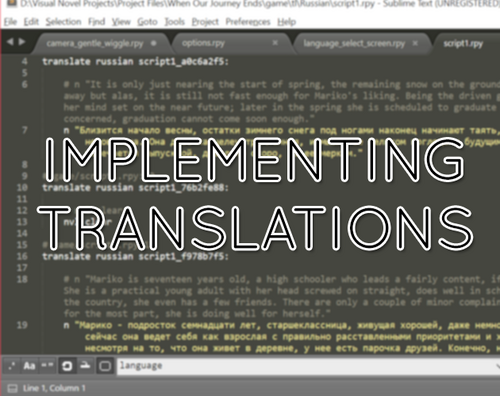 Tutorial on Itch.io
Note: As of May 29,2019 I will focus any future updates on the itch.io page rather than this post.
Introduction
In this tutorial I'll be discussing how to add a language option to your Ren'Py game. This is solely for the implementation of a translation, NOT to generate a translation from the script. There is no automated translation button built into Ren'Py, and I highly recommend against using machine translation for official game releases, as the practice is highly frowned upon in.
When working for Afterthought Studios, I worked with a team of translators to make the Russian translations of Afterthoughi's games. I then implemented the translations into the scripts. However, the process can be confusing when you only do it once every six-to-twelve months or so. Thus I made a guide for myself some time back to avoid confusion. I've decided to share and update the tutorial for anyone who might find it useful.

To get a basic understanding of the translation framework built into Ren'Py, I recommend reading this Documentation page.

Once you have your game's script completed in the original language (I'll be using English in the example), you will want to generate a blank script for translation into another language (Russian, in this example.) To do this, you will select the project in The Ren'py Launcher and go to the Actions menu, where you will click "Generate Translations."

This will take you to a second menu, in which you will input the name of the language you are generating scripts for. Be sure to use all lowercase letters.

Now press "Generate Translation," making sure to have the box next to 'generate empty strings for translations' checked.

Ren'Py will generate blank files for your project, which can take a few moments depending on how large your project is. Once it's done you'll find the blank scripts for translation in your project's "game" folder, like so: 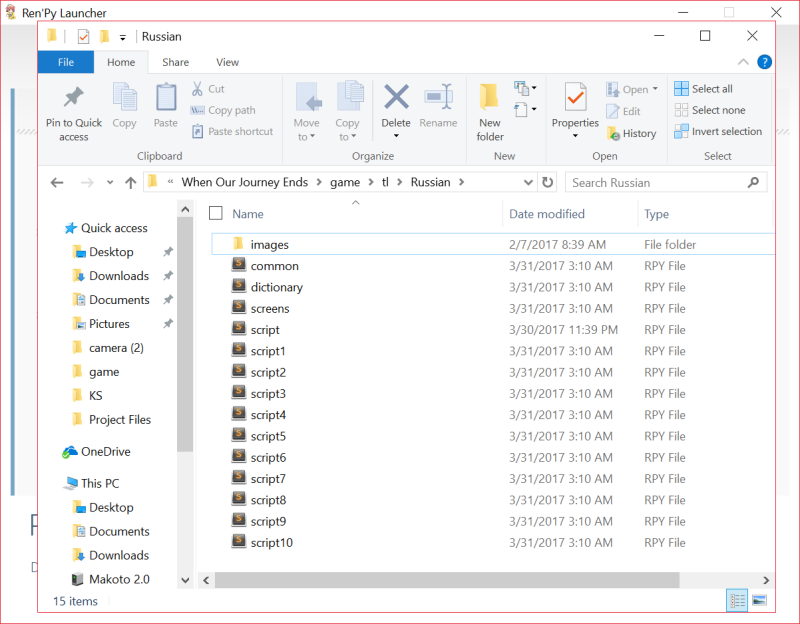 Here's what one of the scripts looks like before the translation is filled in. 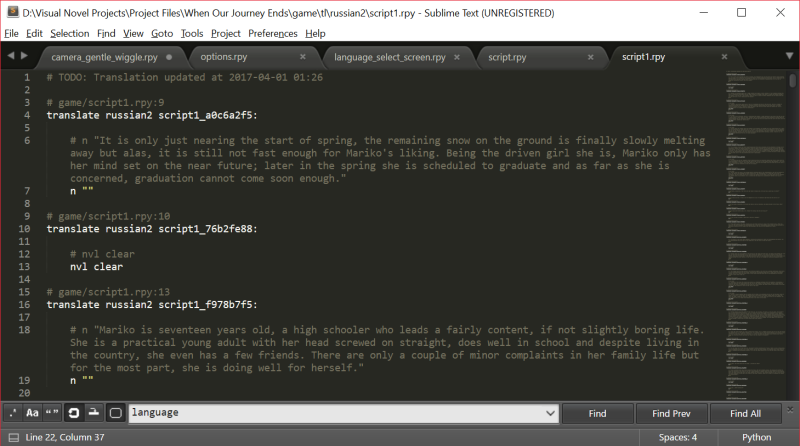 You can see that the contents of original script (in this case, the English text) is available in comments. The lines above the comments are what allows Ren'py to replace the English line with the Russian line, when the game is played in Russian. Below the comment is an empty dialogue line with the appropriate character label defined, which will eventually be filled with the translation.

Here is what the same script looks like after the translation is implemented: 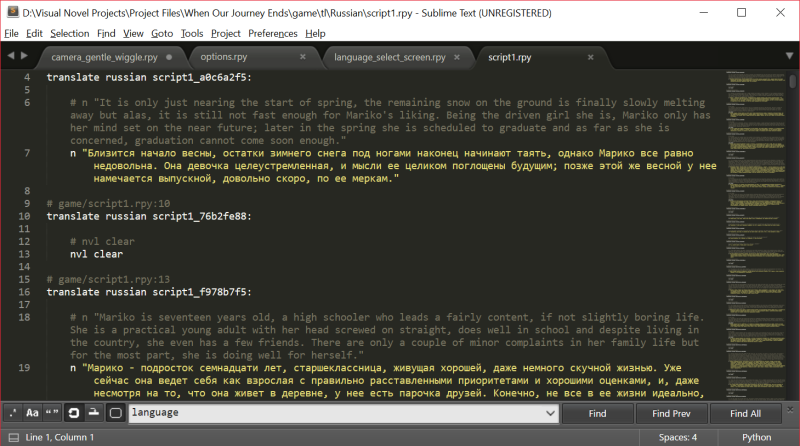 match the capitalization of your game folders. If the folder is "/game/tl/russian" make sure "russian" is always lowercase, or you might get weird issues. At one point I had an error in which only the menus appeared translated, but all of the text was still in English. It was because of a mismatch in capitalization.

Another issue that sometimes crops up has to do with how characters are defined. When Ren'Py converts a script into an empty script to be filled with translations, it will automatically convert some lines that won't be translated in the same manner as the rest of the script.

For example, the script we generated for Forgotten, Not Lost included the character definitions, which our translators naturally translated.

But this caused the translated names to override the names in English, no matter which language you played the game in, due to how Ren'Py works. To prevent this, you must do the following:

You will find this in the scripts of the Russian translation:

In the end, our Russian Strings looked like this: 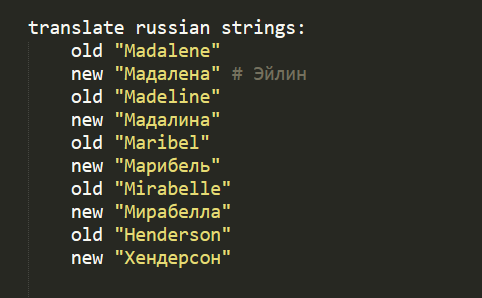 and the error was resolved.

Now that the above is done, you should have a functioning translated script. Be sure that your UI is also translated. If you use imagemaps for your GUI, you'll want to have translated versions of any UI images and add them to your translated file folder, like so:

Now, you'll need a way to allow your players to select the language they want to play in. For Afterthought Studio's games, I had the option pop up in a splash screen upon opening the game. If the player has already made their selection, the splash screen won't pop up again.

To do this, I used the following code in options.rpy:

Please note that not all fonts will be compatible with a given language, so you may need to change the font depending on the language selection.

If you want players to be able to choose the language upon opening the game, put the following in script.rpy:

And in case your players want to switch languages after starting the game, put the following in your imagemap for the Main Menu or Options Menu for screens.rpy:

This is how I've implemented translations in the past. As Ren'Py updates, I'll try to improve on this tutorial as I am able to. I will focus any updates on the itch.io page rather than this post.

This code is compatible with SteamAPI, so you can use it in conjunction with achievements and such. (ie. having an achievement unlock when players change the language.)

I hope this helps anyone who might need it. If you have any questions, please feel free to leave a comment and I will try to get back to you.

If you found this helpful at all, please consider leaving me a token of your appreciation, if you are able to.
Last edited by Morhighan on Mon Jun 17, 2019 2:44 am, edited 7 times in total.
Top

Also.. you can use this code with SteamAPI too.

karorogunso wrote:Also.. you can use this code with SteamAPI too.

Good to know/remember that!

Morhighan wrote: Put the following in script.rpy:
(You can use this label before the game starts so players can choose the language immediately.)

Thank you so much for this tutorial, it's very clear and useful!
Just a question, though: how do I change the "$ renpy.utter_restart()" part so it goes to my "label start" directly and skips the splashscreen?

*EDIT Nevermind, I changed it for "return" and now it leads me directly back to the game instead of the main menu, but I guess that works fine, too.
Do you like BL games? Then join Ertal Games' Discord!
https://discord.gg/ZUFsg9v
Top

Morhighan wrote: Put the following in script.rpy:
(You can use this label before the game starts so players can choose the language immediately.)

Thank you so much for this tutorial, it's very clear and useful!
Just a question, though: how do I change the "$ renpy.utter_restart()" part so it goes to my "label start" directly and skips the splashscreen?

*EDIT Nevermind, I changed it for "return" and now it leads me directly back to the game instead of the main menu, but I guess that works fine, too.

Unfortunately I don't speak any other language well enough to know myself, how good do the translations tend to be? Is it just utilising something like Google Translate where it makes sense 98% of the time but sometimes completely falls apart?
Top

Kinross07 wrote: ↑
Sun Aug 06, 2017 2:02 am
Unfortunately I don't speak any other language well enough to know myself, how good do the translations tend to be? Is it just utilising something like Google Translate where it makes sense 98% of the time but sometimes completely falls apart?

So we hired a team to manually translate the script and then programmed it using the method above. I don't think Ren'Py actually translates anything itself. Though it would be nice.

This is absolutely fantastic, thank you so much, Morhigan! ^_^
hey hey I made a thing
Top

Having a bit of trouble employing the hotspot()? I don't really have an imagemap to use it with...

Hello
I want to do the translation. I've created files using Renpy. I even made the language menu on the opening screen. But how do I guide? I do not know. What's missing?

Updated first post to include the improved tutorial and a link to itch.io version, which will be the location of any future updates.
Top

Thank you very much for this tutorial, it's really great ! I was thinking about it, and pop you update it, wonderful ♥
Top

Hi, is there a way to change the lenguaje using a imagebutton ?
Top

And its not doing anything

It did change to spanish, but is not changing back to english, also, is there a way to restart the game after changing the lenguage?
Top
Post Reply
31 posts