Hello! I am really trying to improve on my artwork, specifically my character design & anatomical drawing skills! I have been working on this image, which is pretty rough. I have a few questions I could use help with:

1. I know her arms aren't exactly quite right - they look awkward. What exactly is going wrong here? Any suggestions for how I could improve them?
2. I know the outlines & linework is pretty rough since it's not yet complete. When I do linework I never quite feel sure of what to make thicker, or what to make thinner, or the best way to draw lines. Does anyone have any suggestions or ideas for this?
3. Color/shading wise, I realize its pretty quick and dirty. Does anyone have any suggestions for how I could improve upon this? Maybe more detail in the folds of the clothing or in the shading of the skin?
4. Is there anything that I'm missing in this character/drawing?

Please feel free to be brutally honest about things i can improve, I would love any feedback or critique at all! Any comments or help is always much appreciated

The arms look awkward because:
1a) They feel like they don't have bones. Just like pool noodles. 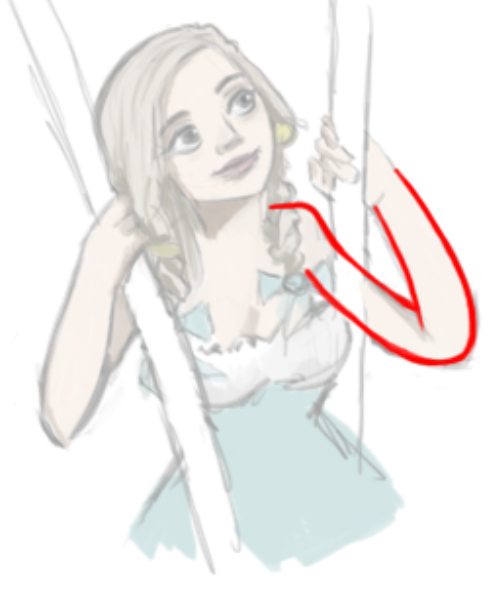 1b) The wrist is thicker than the biceps, no structure 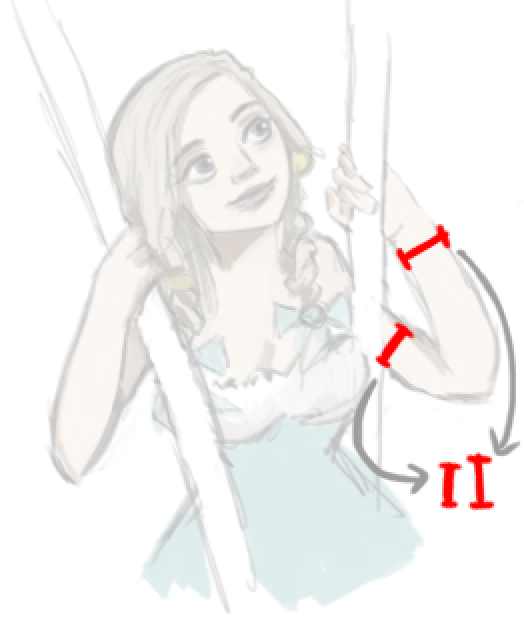 1c) The lines of the forms are either almost parallel or are clashing with each other, so the result is stiff and unnatural 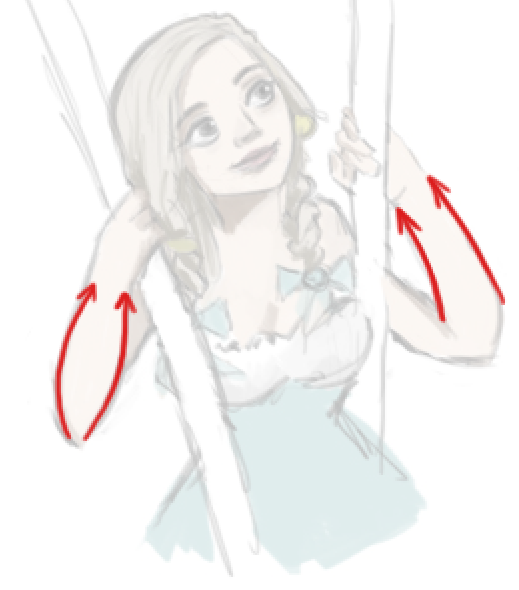 The solution would be to understand how bones and meat work. So study anatomy more. And dynamic drawing. Here are some basic pointers:

Here's the simplified bones of the arm, from the front, palms up 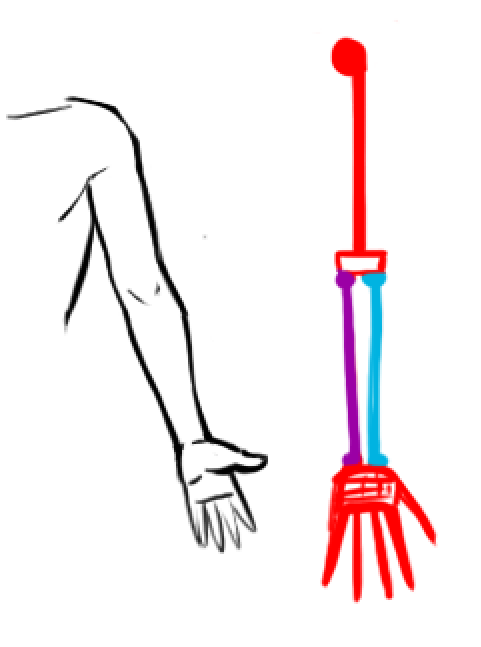 They don't change, they're always there and they bend and twist in pre-determined ways. The root of the whole arm has an impressive range of movements because of its round joint. Up, down, back, forth, all around - it can move in all the ways. Tho it does have restrictions, it can't go back very far thanks to the scapula 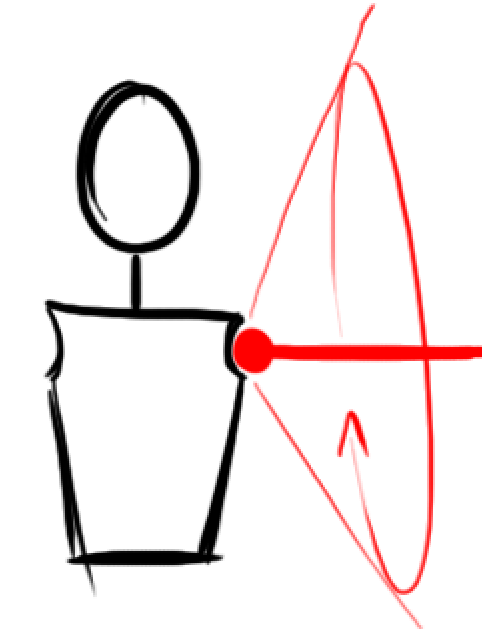 Elbow joint's deal isn't as good. This poor sucker can move only this way. No bending back 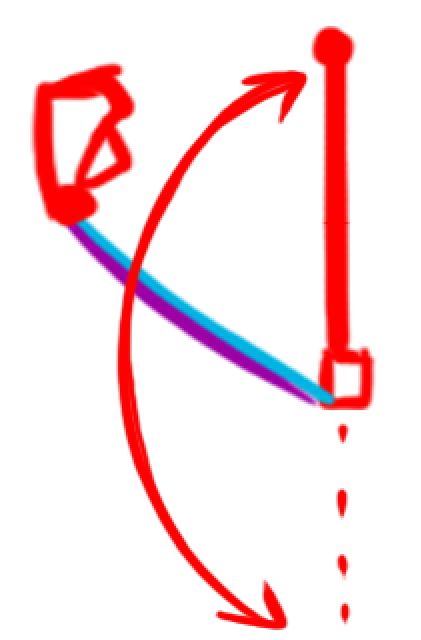 But Yon, how does the palm rotate around, you ask? It's thanks to these bastards +shoulder joint 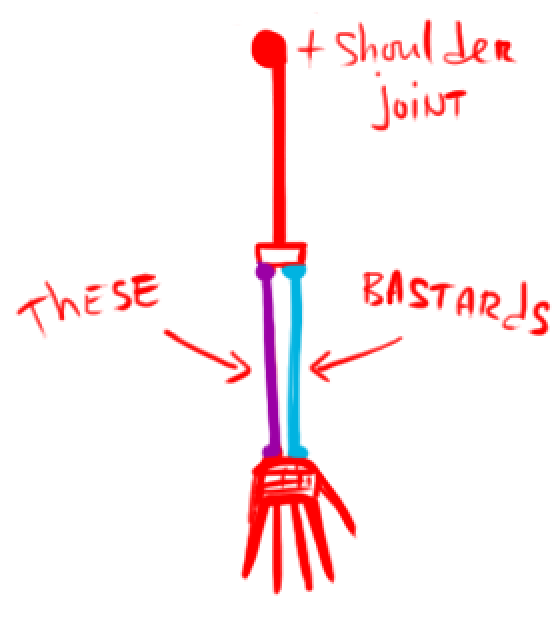 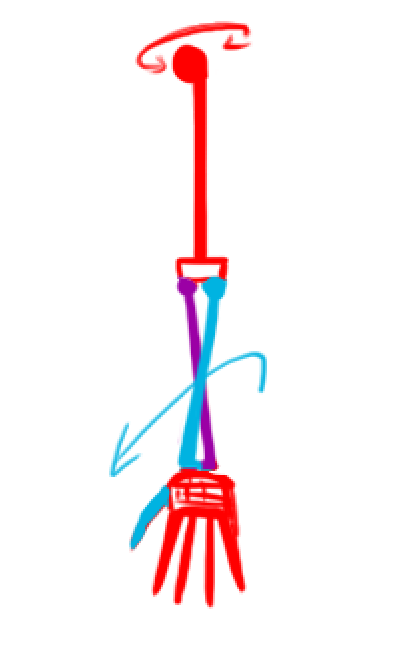 The wrist joint is a bunch of nonsense 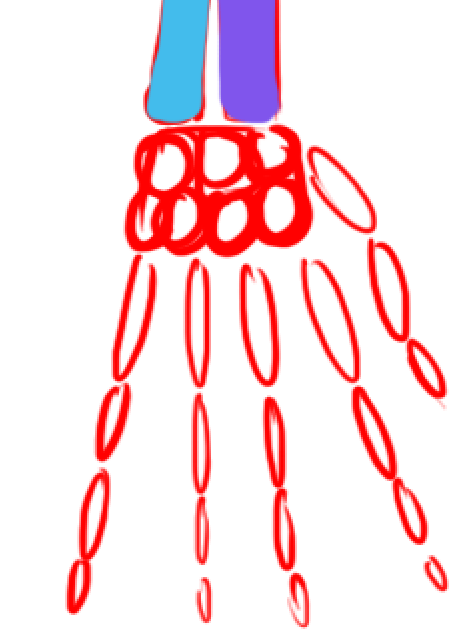 But the important part is its movement range. It can move up and down pretty well 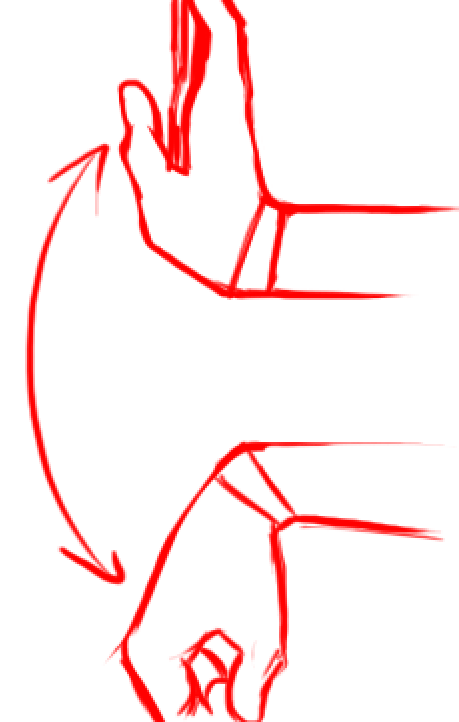 But the side movements are limited 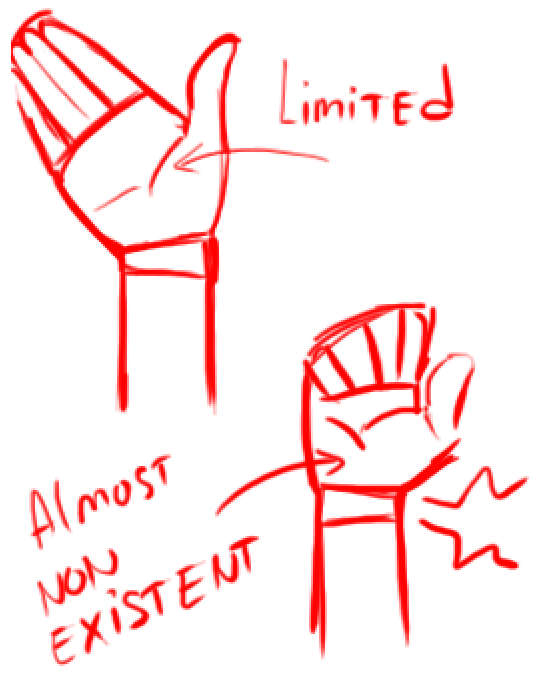 So we finished the bones. Now let's move to the squishy things. Muscles are the most changeable parts, they twist, bulge, squish, and tense. They work as pull and push system, so most often they come in pairs. When one of the muscles tenses and rounds, the other relaxes and stretches.

Here how it looks from the side. For example sake, this arm is very beefy. The elbow joint isn't covered in much muscle because otherwise it'd be impossible to bend it. But the outer side of the joint is covered only in thin muscle head-stuff and skin, so it pretty much sticks out. The inner side of the arm is the place where the squishy things happen, mostly 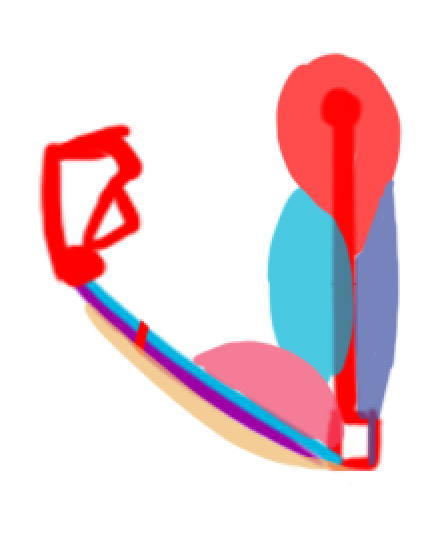 The most meaty part of the elbow area is pink blob over the blue bone. It pretty much acts like the blue bone and follows the thumb.

The wrist doesn't have much muscle, so it's the thinnest part of the arm.

SO! Let's go back to the picture. Let's put some bones

Remember, the elbow bends in only way + the muscles are mostly in the inner side + the limited movement of the wrist 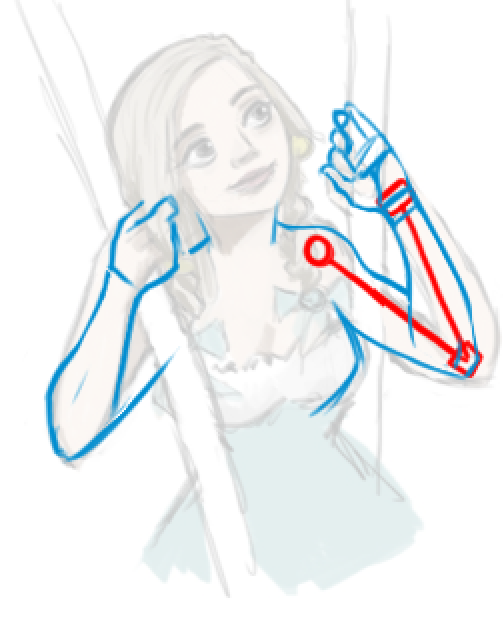 Et voila! Something like this, I tried not to change the pose too much, so it still might be wonky somewhere. 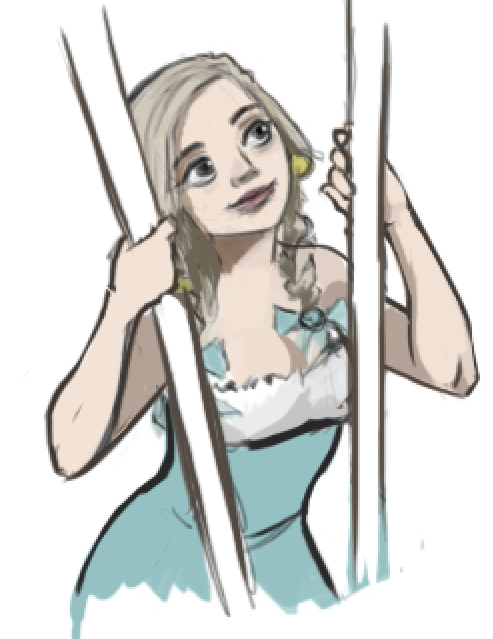 This took me more time than expected, so I'll talk about other points later, maybe

Thank you SO MUCH, Yon!! I really appreciate you taking the time to sketch all of that out for me - and go over my drawing with critique and improvements.

You're 100% right - I am going to work on sketches & anatomy more before worrying about shading or styling!

I took what you said to heart & tried to do a figure sketch of a posed naked lady. Here's what I've got so far:

I tried to keep in mind what you said about bone structure and muscles when working on her. And I also cheated a little bit and drew from a photo reference, and used photoshop's guides to make sure that I was being pretty accurate.

I think that focusing on anatomy & how human's bodies work is going to make a night and day difference in my art!!

As for this sketch, I felt really frustrated by her feet and sort of gave up (and it shows). Feet are really weird and I never know quite what to do with them. I think for my next practice I might try to do a foot & hands study to try to get better at them

Please feel free to critique this sketch as well! The way she was looking up & away was also really frustrating to draw. I also kept messing up on her overall anatomy (I kept making her thicker than she actually was) so I think I'll want to try drawing all different body types as well.

Edit: I liked how this lady came out, and wanted to try my hand at coloring & shading her skin. It's not where I'd like my ablities to be yet, but I had a lot of fun working on her! CCW Welcome.

I made a chibi of Eileen! Would love any critique or feedback on how to improve her. 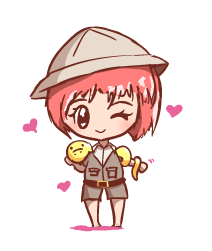 I think I could work more on my lineart / shading, but wanted to do this quickly and get something down first before cleaning everything up

Some comments on the posed naked lady. I feel like there's something wrong with her left arm and right calf. The shading at her elbow region makes it look like a bone is jutting out there, like we're looking at the back end of the elbow instead of looking at it in profile. If you lighten up on the shading there, or direct it better, that would fix it. The right calf has the correct anatomy of a calf, but again it's facing the wrong way. The fleshy part of the calf is on the back and the front is, for the most part, hard bone. Given where you have the foot and the knee facing, it appears the anatomy of this woman's calf is almost backwards. Most of the limbs on a human have one straight line and one curved line, at least in terms of drawing them. The calf has to have the straight line portion be the front, the same direction as both the knee and the foot.
Current Project: Vora
Also Check Out: Devil Survivor [Reverse-Engineered]
Top

Thank you, TellerFarsight! I went back and revised the woman's arm and leg.

*Before On Left & After on Right

With the photo reference I used, I noticed that her arm was bent slightly, and I did not do a very good job of shading beneath the elbow (which is why it looked like her elbow was jutting out at an odd angle). I think the new shading helps it look a bit more natural/bent, does this look better to you?

Also, as for the calf & leg, I 100% agree. I went back in and tried to add a rounded shape to the left side of the calf, while keeping the right side more straight.I think this also looks a bit better, would love to get more of your feedback if you see anything else here that looks off!!

Here are some ladies that I recently drew:

Any criticism or critique on these would be greatly appreciated!

A few sketches of women!

Constructive criticism on these is always appreciated! 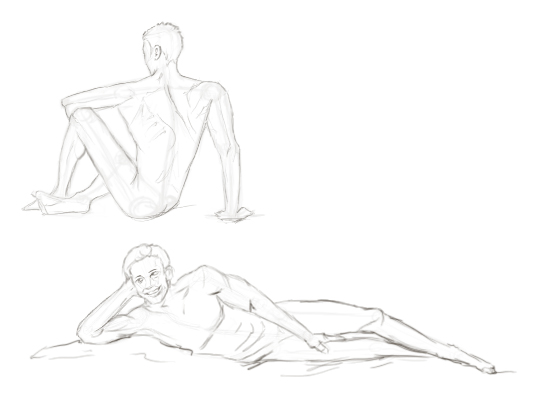 Trying to get a better feel for drawing male figures/anatomy. For some reason, men are SO MUCH harder than women are for me! Does anyone else have this problem? I really struggled with just these 2 sketches, no idea why it's that different but it is ;_;

sasquatchii wrote: ↑
Sat Sep 23, 2017 1:26 am
For some reason, men are SO MUCH harder than women are for me! Does anyone else have this problem? I really struggled with just these 2 sketches, no idea why it's that different but it is ;_;

I have the same issue! I feel like I can draw females (in anime style) much better than males, maybe it's matter of personal preference or something? Or more the fact that usually girls have more curved figure, while men are more ... you know... "square" ? I mean, more "blocky" shapes.

I'm not really experienced artist, but I can say your sketches are very good... except these two guys, something feels off about them. I don't know what exactly, but I think it could be something in perspective/anatomy, or lack of shading. For example in the sitting one, I have a feeling like he is too wide in shoulders. And his left arm could be wider.
With the lying one, I feel like legs are weird.
Check my games on Steam

Thanks for the critique, Mikola! The guy lying down was lying down on a shaggy rug, which I think contributes to his legs looking weird.

I recently worked on drawing another guy: 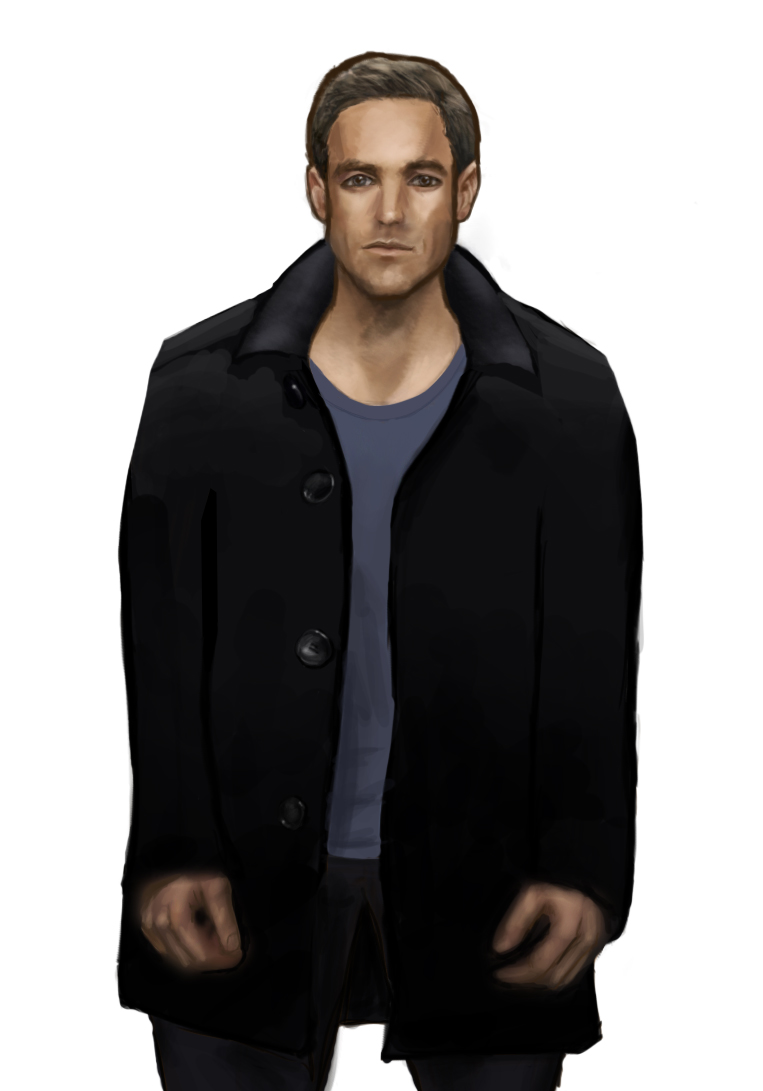 I wanted to do a skin, color, and shading study! Skin is HARD. And I know there's something off with his eye, but I can't quite put my finger on what.

Also I got lazy with the hands

It is interesting looking through your sketches and seeing the steady improvement (in such a short period of time). Keep at it!

And YonYonYon -- your bone / muscle mini-tutorial was outstanding! Thanks for sharing it.
Top

Thank you for the kind words, trekopedia! I have been practicing A LOT, pretty much every day and trying to improve, so it means a lot to hear that

I have a long way to go and really appreciate everyone's help & encouragement.

Here's another practice piece that I made! Any critique or feedback would be much appreciated. 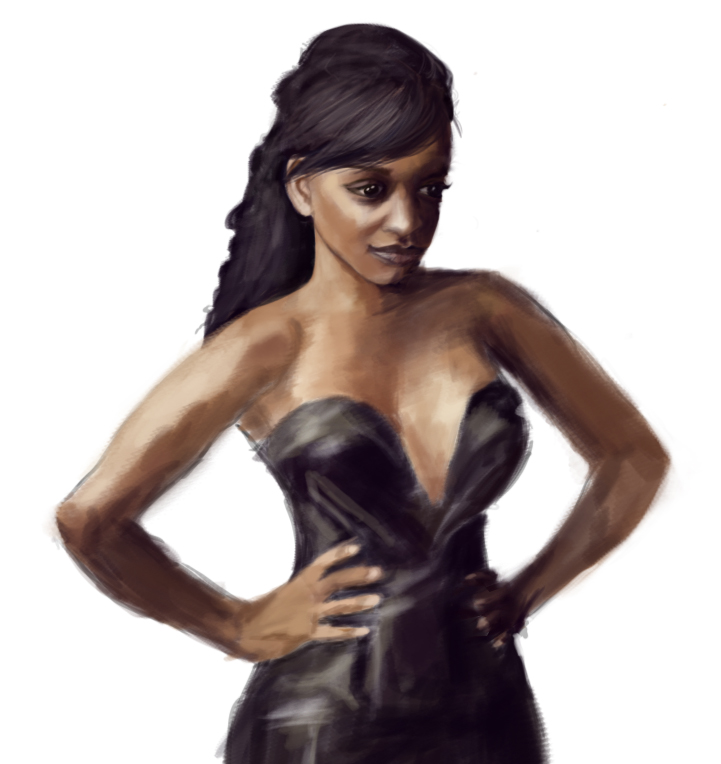 You probably do this already, but just wondering if you use the flip your canvas trick?

Anyway, with the guy's eye... I hope the image above can help!

1) The same guy but canvas flipped. Have you spotted it yet?
2) One eye is slanted down, the other isn't. One eye is close to the nose, the other further away. The eye that is closer to the nose is also further away from the ear, and visa versa for the other eye.
3 and 4) Mirror image of each half. Notice how there is an inconsistency with the shape of the nose near the eyes? Also, do you see how the forehead is different in 3 and 4? In 3, there is a strong shadow that leads the eyes down the forehead to the eye, giving the forehead a slightly different shape. Now if you look back at 1, can you see how that makes the eye look different? It almost feels like the face is a different angle (even though it isn't).

I should add that I think you did a great job on the skin and the hands!! They look very natural.

Thank you, Steamgirl!! I really appreciate your feedback & taking the time to show me the canvas flip trick! I used that for the drawing below and it really helped with the placement of the eyes (though it's not perfect): 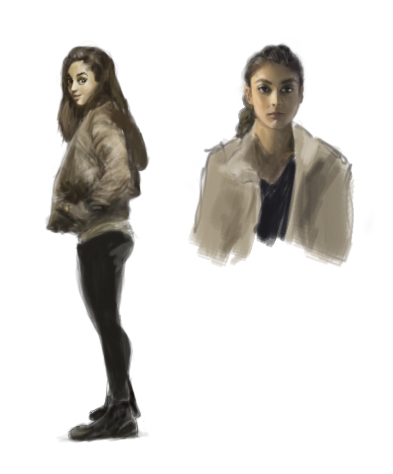 Getting the eyes right seems to the trickiest & yet most important thing in drawing people.