Hi to you all!

I would like to ask for some opinions on our game "Panzer Hearts" visual look. The game is a war themed adventure with some romance as well (The plot happens in a tank factory during war).

Please check out these screenshots from our game. How do you feel of the details, characters, GUI textbox, the overall feeling?

Any suggestions you may come across how to maybe enhance the look of the game could be very valuable to us. 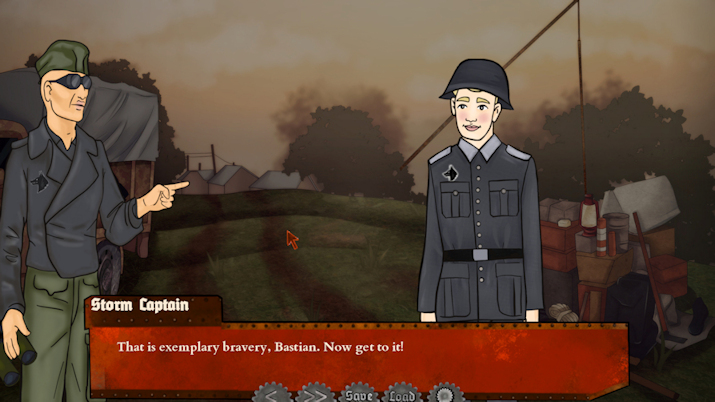 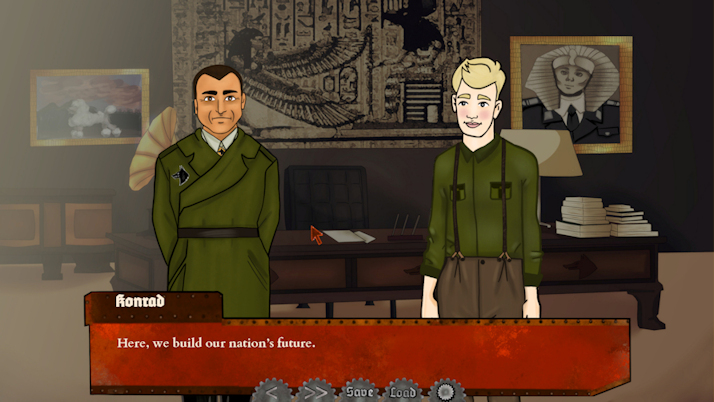 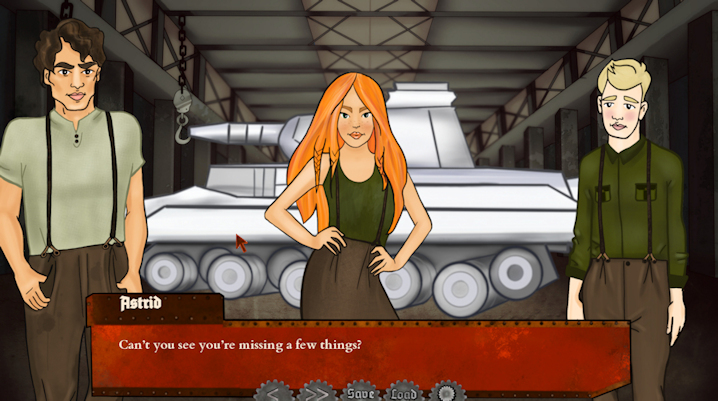 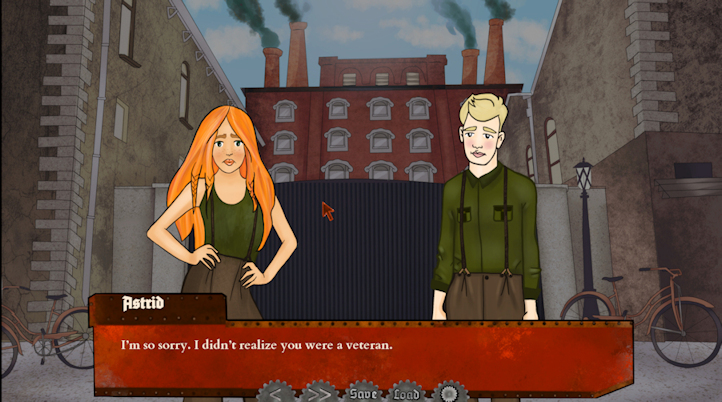 Thank you for considering helping us!

I'm sorry but I have to lay this on you : the wheels on that tank are all over the place.

Looking at the cupola I'd say you've drawn a PzKpfw IVD (or one of the previous IV's) or a PzKpfw III outfitted with the 7.5cm gun of a IV (the Germans did this after they've upgunned the IV's and were left with a whole bunch of 7.5cm guns). 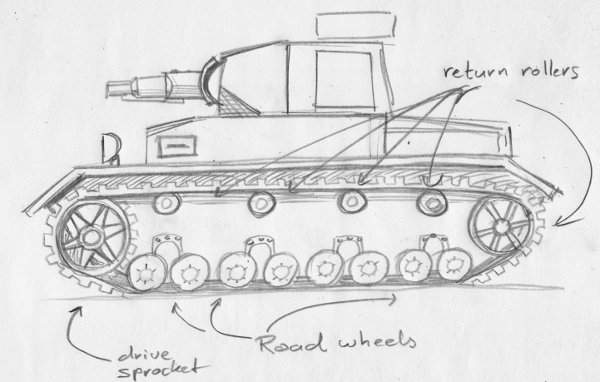 No attempt was made to get dimensions, details and stuff right. It's just a really quick 1 minute sketch. BUT the wheels are in the right place and the number of them are correct (BTW : this is a IV, you can tell because it has 8 road wheels, the III's have 6 road wheels).

There are the road wheels on which the tank actually rolls. Often visible is the suspension of these road wheels (in this case the little boxes between each pair). The road wheels can be small (like in the Panzer III and IV or the American Sherman tank, for example), big (like on a Russian T-34) and can even overlap like on the famous German Tiger and Panther tanks.

At the other end there's a big return roller that keeps the track aligned. Finally, there are return rollers to keep the top part of the track in place.

And those are the types of wheels. You can look at different tanks and see how these wheels on that particular model look. Also pay attention to the suspension.

Now, I don't want to sound pedantic but people who know a little bit about tanks do look at these things. And you do have the word "Panzer" in the title

I can't draw, so I won't comment on the art. I would recommend using an arial font instead of times new roman for the dialog.
All of my VNs are at http://wolflore.net Note: Downloads currently not working
Some are at http://www.the-new-lagoon.com. NSFW
Poorly done hand-drawn art is still poorly done art. Be a Poser (or better yet, use DAZ Studio 3D) - dare to be different.
Top

Thank you for your insights Fuseblower and Fleet!

The model is actually the Panzer, but we call it the Schnauzer in our game!

That one seen in the rear is a "prototype".
Here is the real deal_:

What do you think of the overal look? Do you feel the pieces go together (Gui,characters & bg art)??

I guess you mean "Panther" ("Panzer" is just the German word for "tank").

Of course, it wasn't officially known as the "Panther". Officially it was known as "Gerät 46", "SdKfz 171" or "PzKpfw V" but the troops in the field gave their machines real names like "Hetzer", "Brummbär" and "Maus" (the last one being the name of the heaviest tank ever created). I think the funniest one is the "Möbelwagen", so named because the troops thought it looked like a furniture lorry

So I like it that you call your tank "Schnauzer"

Here's a side view of the Panther (scanned from "Der Panzer-Kampfwagen Panther und seine Abarten" by Walter Spielberger) : 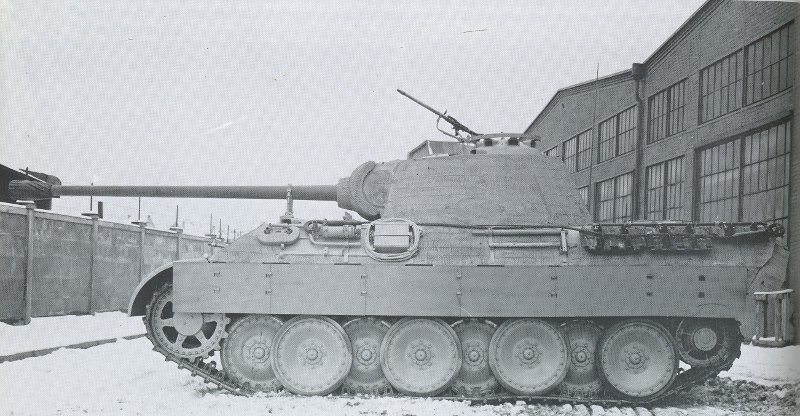 Notice how the road wheels interlock and how they're all on the ground. After all : they carry the entire weight of the tank. The (frontal) drive sprocket is elevated so it doesn't bump into anything.

Looking at interlocking wheels like that on the Panther might be overwhelming at first but really it's just circles overlapping each other. Pictures of the Panther during the manufacturing process should make it clearer : 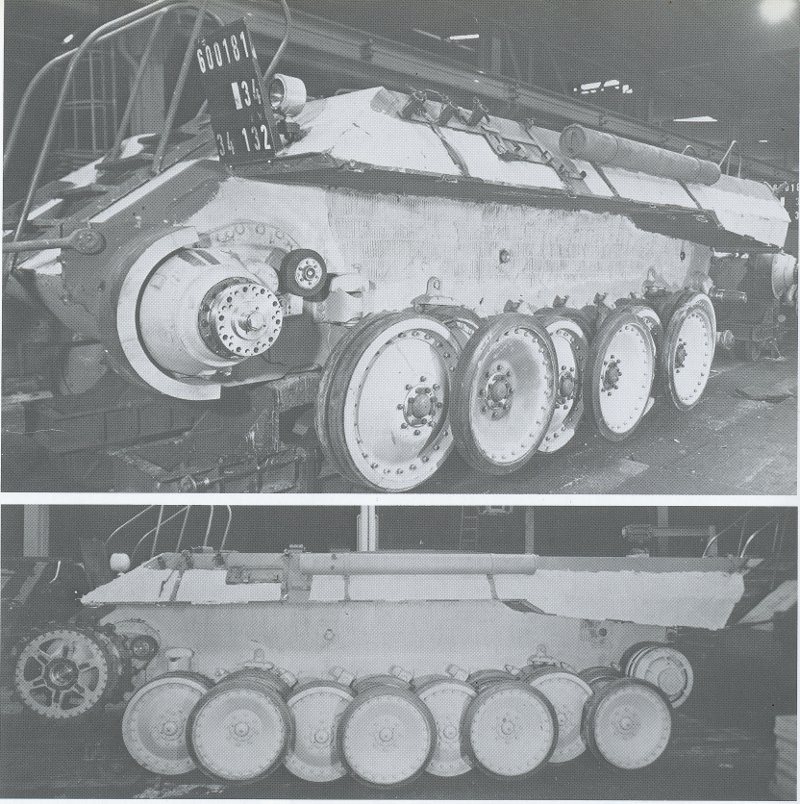 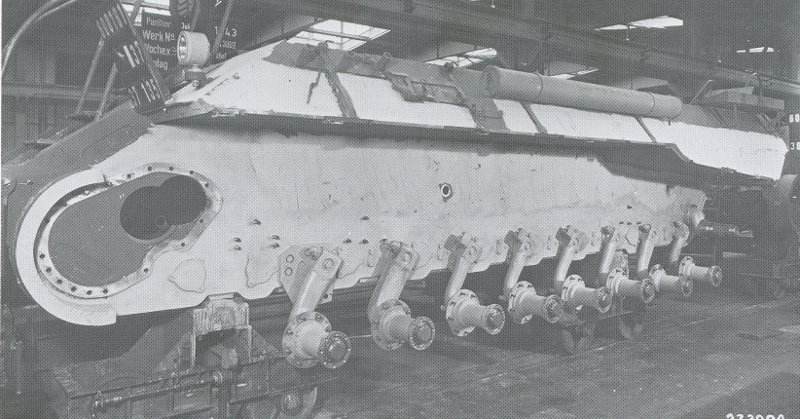 Now, it might seem like I'm nitpicking but a visual novel that has "Panzer" in its title might attract people who know about tanks and people like that will notice that the road wheels aren't lined up and that the drive sprocket is on the ground and that some wheels are just floating around without a function.

It's like a spelin eror. Though it is clear what is meant, it does distract enormously.

As for the rest : I like the color scheme and the whole Egyptian thing going on.

Again Fuseblower - Thank you so, so much!! You are totally right on this subject and we should really take this into consideration! The "Scnauzer" tank indeed tries to be the Pz IV, but we can tweak it to be more accurate. Thank you for making us see the value of the details! We are aiming for tank-fanatics to find our game.