Forum rules
Recruiting Rules: (1) Only recruit if you have an actual, clearly defined project you're recruiting for. Don't recruit if you're an organization that may have a project at some time in the future. (2) Tell people what kind of work you have for them. For commissions, also tell them how much work it will probably be. (3) Tell people how much work on your project is already complete. (4) Always open recruitment threads in the correct subforum - Free, Commercial or Paid Work.
Post Reply
70 posts
Message
Author

Considering my current time and experience, I would probably be most useful
- working on CGs,
- or implementing game logic / integrating assets in Ren'Py
- and I'm open to other propositions.
Reply to this thread or send me a PM!

I'm up for offering writing services to a team for this year's NanoReno.

- Have a preference for fantasy and science fiction writing, though can also write slice of life and would be interested in writing romance
- Much more comfortable writing from a BxG perspective, simply because I'm a heterosexual male, though I am very willing to write from other perspectives I simply have no experience with them
- I'm okay with communicating through email, Skype or Discord, though I'm significantly more active on email and Discord so one of those would be my preferred communication avenue
- Am okay with R Rated content, provided it remains pretty vanilla in terms of the acts I have to write

If anyone if interested, simply send me a PM through Lemmasoft, I check the forums nearly every day so I typically reply quickly.
My Current Writing Project: viewtopic.php?f=47&t=37699
Manipulation Teaser Demo: https://drive.google.com/open?id=0BzJ4E ... zV6TWVaclk

Hi I'm offering my services as an artist.

Most of my experience is in drawing backgrounds. Some samples here. I'm open to working on character designs and CGs as well.
I'm pretty open to working on any kind of game.
Feel free to send me a PM. I'm also on Discord most of the time.

I'll try my hand at it this year!

I'm an artist! Random examples here, and more random current art!
I can contribute character designs, character sprites and possible chibis! Or even promo art. I'd prefer not to do certain CGs styles but won't do backgrounds or GUI! I can also give support and encouragement, idea bouncing, comments or reviews, let me in your project!!
I love fantasy style themes! But I'll try to be open to a few different genres. I don't think I have too many limitations!
I can communicate via forum Private Messages or discord, or just let me know what type of communication you'd like.

I do have a job with a rather random scheduling, but I will do my best to give timeframes!!
Hope to her something back from everyone!!
Top

Hello everyone! Ostrich Burger Productions (one man team) is participating this year with a small visual novel project!

Ivy and Blue is a semi-short (hour to play max) game that involves fantasy/magical elements and plants! ^-^ Its central theme is on friendship and looking past appearances. I am looking for some artists for:

If you're interested please respond/PM me! I respond regularly through PMs here and through email: vzielke48 @ gmail.com

OH! Also, if all goes well, possibly a female voice actor. This will depend on if it gets made on/ahead of schedule. There's also the possibility of adding voice after NanoReno. Thanks again!
Top

Hi!
We're a group of different devs who've been discussing on twitter jokingly about making a sea creature parody dating sim so much we decided to make it!
We're (BobConway, PM, CrouchingBacon, Scribbles) mostly writers and really need to pick up some artists and an art lead, but really we'd like to work with anyone who wants to contribute.

For a very long time your penpal Waldo has been your strength and comfort, each of his letters telling you about exotic locales and the people he's met during his travels. But his letters have stopped coming. Wanting to make a change in your life, you set out to track down your lost penpal, following his letters as a guide through the world.

During your travels you meet a lot of interesting a cute "boys", they might be a bit weird, have several arms, a hard shell or even be only 5mm long, but their connection with you is as real as anything else. 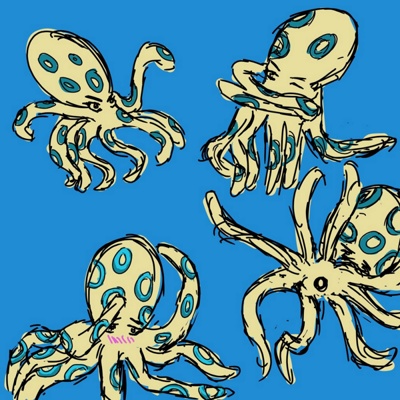 Concept art by CrouchingBacon
We would love to pick up a writer for a sea horse father with children, and it'd would be really cool if you had first hand knowledge of a location not in America, to diversify our travel aspect.
But we wouldn't snub any writer, programmer, musician or anything else.

We mainly communicate through google drive/docs and our Slack.
Everything is still in the planning stage, so you'd be a part of making decisions and tuning the story, tone and game.
Pm me or hit me up on twitter for more info

Hi! I'm Spring from Springroll Games. I like drawing and I want to join a group making a cute game for NaNoRenO!

[ Stuff I Can Do ]
- I can draw anime characters - sprites or cg is fine!
- I would love to work on UI, though I'm not experienced
- I have some knowledge renpy and html/css/javascript
- However, I don't draw backgrounds well

I can communicate through PM, but if there's another way you want to communicate, feel free to ask!

Heyo!! I'm an artist, I draw anime styled art, and/but this time i'd like to contribute as just a chibi artist!
If you want chibis or chibi CGs in your game, just message me a summary of what your game is about, and some character designs. (I'm kinda picky but we'll see haha)

I specialise in live recorded instruments but can also work with electronic music, and have a well equipped home studio.
If you are interested in discussing your project and what you are looking for, send me a message.
I can provide examples of my work if I feel my style will work with the project.

It's Owl back with another foray into the realm of sci-fi/fantasy! This year, we're re-visiting the world of Pairs!

Rejoining the team from last year are ButterflyWisps and Shida. (And possibly/hopefully more!)

Have you ever been distracted with a glitch in your wifi long enough to look up and see people getting eaten?

I know our coming MC has.

We need a sprite artist who wants to try a bit of gore. Haven't decided on realistic VS cutesy VS non realistic art style so we're keen to adopt any style you've got and make other designs around it.

Also if anyone loves writing death ends and wants to join us in pathing, killing off the MC... do itttt and join us on the dark side.

Hello there!
I'll be trying my hand at NaNo again this year with the only thing I know how to do what I do best, a light-hearted GxB rom-com.
This time it's a sort of idol-based story wherein the MC/protagonist comes into contact with an idol without really knowing it and then has to navigate through the difficulties/drama that comes along with their fame.
Possible love interests include a humble and cheerful singer/songwriter and his grumpy and overly suspicious band-mate.
This is a VERY shallow summary, more details can be conveyed through PM if required.
Possible word count 10-20k
Preferred art style- General anime art (like my avatar icon). Partial to light and fluffly colouring styles.

You can check out Pastel Rain or Straight Up : Sister-zoned to see examples of games I've released before.

PS- Please send me examples of your work/art if you'd like to apply for either post. You're also welcome to ask any questions/clarifications.
Last edited by Sayumi101 on Wed Feb 21, 2018 11:13 pm, edited 1 time in total.

Hello~ I'm Lily! I'd like to work on a GxG or BxG game or well any game that doesn't involve drawing too many males :^) (only because males take too much effort for me to draw aha).
I'd like to practice my skills in one or more of the following:

- sprite art
- CG art
- voice acting (new to this!).
*I can do female nudity/ecchi but nothing more than that. I'm fine with doing soft cell shade or hard cell shading.

My DevArt: https://paper-neko.deviantart.com/
Excited for nanoreno, feel free to PM me ^^
Top

Whats up dudes, Nano was pretty cool last year so I'd like to work on it this year too.
I can draw anything you need, including sprites, BGs and CGs, though I'd prefer to do BGs. Feel free to PM me or send me an email at bsquid131@gmail.com if you want me