Lovingly Evil is a game where you create a villain character and go to the Villain Conference where you get to meet many different villains, such as the evil stepmother, an evil AI -- and even the ultimate baddie, Satan. You can move around the conference area and chat with the other villains. Maybe you can find a new partner, whether it is in crime or love!

Lovingly Evil is a humorous dating sim game that plays with different villain tropes and stereotypes. For a bit more info & visuals, visit our website: https://www.lizardhazardgames.com/

We're going for partial voice acting, where each character has a few different words and sounds that can be re-used in different scenes, like "Hello!" or "Hmmm…", as well as some short sentences. The lines will be short, but they need to reflect the character's personality.

We're casting for the 5 love interests and a few secondary characters. This is a paid gig, but this is an indie game so please offer your indie-friendly rates. Each love interest will have about 10-20 short lines/sounds, secondary characters even less than that. The applications are open until the 7th of May, and the chosen voice actors will be notified after that. We need the lines in mid to late May, so the voice lines need to be recorded within about a week after the voice actors are chosen.

Requirements:
-At least some past experience with voice acting
-Quality setup (decent mic, no echo, etc), you'll be using your own equipment
-Reliability, you need to stick to deadlines and communicate well (previous experience working on projects helps prove this)

Please send your applications to lizardhazardgames (at) gmail.com or PM me on these forums. (replace the (at) with @, I'm trying to avoid spam bots). If you have questions, you can get in touch with me here, on social media or via email. Things to include in your application:

-Your contact info etc
-Your availability
-Your CV or a list/description of previous voice acting projects
-Your rates (how much do you charge?)
-Your demo reel / voice acting samples from previous work
-A sound file of you reading the lines for the character you're auditioning for

Love interests
(These are in the same order as the image above, from left to right)

Lucifer - Satan:
Gender: Male
Personality: Friendly, family-oriented, humorous, scary when angered, "dad-like"
Other details: Runs a hellfire-powered grill at the conference. He's very busy and works hard. Wants to be a good boss to all the devils who work for him.
Voice: Somewhat deep, warm, sounds like he's in his 20's-30's. Being able to go from warm and kind to a bit more edgy, slightly hoarse voice is a plus.

Lines for auditioning:
"Hello! What can I get you?" (Friendly)
"(Sigh) What a mess…" (Tired)
"Cut it out!" (embarassed by teasing)
"I am the King of Hell, the Morning Star!" (aggressive, threatening)

Imperia Maissard - The Evil stepmother:
Gender: Female
Personality: Sophisticated, sassy, ambitious, confident, selfish, calm
Other details: The queen of a fairytale land. She rules her kingdom with an iron fist and hates her stepdaughter. She lost her husband when they were both young, and has had to take care of the stepdaughter ever since.
Voice: Rich, "jazzy", smooth, mature. Sounds like she's in her 40's or 50's. A foreign accent would be a plus, so non-native english speakers are encouraged to apply. The origin of the accent doesn't really matter much (except no Finnish accent please, I'd cringe hearing that because I'm Finnish myself) since it's a fairytale land but please don't try to do a fake accent if you don't naturally have one.

Lines for auditioning:
"Oh. It's you again." (Dismissive)
"Preposterous!" (Offended)
"Amusing." (Intrigued, amused)
"I'm terribly bored. Perhaps talking to you would amuse me. Though I doubt it." (bored)

Nova - The AI:
Gender: Non-binary (since she's a robot) but talks in a feminine voice and looks feminine
Personality: 2 personalities, a fake chipper anime personality and her true personality, which is a bit more curious, intelligent, calm and observant. These can be voiced by 2 different people, but it'd be great if 1 actor could do both.
Other details: She's a cute anime-style robot who has a real artificial intelligence. She was created by a mad scientist to accompany him, but eventually developed her own personality and made modifications and additions to her programming. She acts cutesy around the mad scientist, but shows her real personality to the main character.
Voice: 2 voices: Cute, chipper, pretty high-pitched, soft and girly anime voice and a calmer, genuine, a bit less high-pitched voice. It'd be great if the voices resembled each other, but were different enough to tell that there is a personality shift. The second voice could somewhat resemble female AI assistants (like Siri, Bixby, Google Assistant, etc).

Genuine voice:
"So, what would you like to discuss?" (neutral, polite)
"Humans are so cute!" (genuinely excited, happy)
“Don’t worry. If I start to miss you, I can replay our conversation in my head.” (a reply to the player saying goodbye to her)
"Fun fact: It would take approximately seven seconds and 10% of my power to vaporize you!" (Chipper, yet threatening)

Felix - The Vampire:
Gender: Male
Personality: Sophisticated, forgetful, oblivious, charming, old-fashioned, polite, pessimistic
Other details: A classic vampire. This character is designed to fit many vampire stereotypes. He sometimes forgets what century it is, and he's terrible with technology. He has a flower arrangement stand at the convention.
Voice: Soft, sophisticated. Sounds like he's in his 20's-30's.

Lines for auditioning:
"Lovely to see you again." (polite, kind)
"Excuse me?" (confused, forgetful)
"Disgusting." (disapproving, offended, disgusted)
“I have hardly had any time to go through my daily existential crisis yet.” (a bit tired after a long day, half-joking half-serious)

The Clone:
Gender: Depends on the player character
Personality: Edgy, inexperienced, prankster, slightly 'tsundere', wants to look tough but is sometimes insecure
Other details: The clone looks like the player character, except shrouded in shadows. The clone struggles with insecurity due to being a copy of the MC, but tries to hide it. They play pranks which are blamed on the MC because they look the same.
Voice: Anrdogynous, edgy, but also has to suit silly moments. We're probably adding a slight distortion during post production to make the voice sound a bit unnatural

Lines for auditioning:
“I’m your clone. Isn’t it obvious?” (sarcastic/mocking)
"Hey, where have you been? ...Not that I missed you or anything!" (pretending that they're not interested in the MC)
"(Laughter)" (mischievous)
"Whatever." (uninterested, bored)

Mortimer the Skeleton
Gender: Male
Personality: Proper, preppy, polite, positive
Other details: He's one of the event organizers and welcomes the MC to the event.
Voice: Polite, suitable for customer service, but also a bit silly. Excited to help you! Not a very deep voice.

Lines for auditioning:
"Welcome to the Villain Conference!"
"Feel free to ask me anything!"
"(A tired sigh)"

Dr. Leon E. Everscum - The Mad Scientist
Gender: Male
Personality: Conceited, confident, nerdy, intelligent when it comes to technology, but not emotionally or socially intelligent. He has a somewhat 'incel' mindset.
Other details: He created Nova the AI to be his research assistant and his wife. He only sees her as a convenient tool, and is completely blind to her real personality. He believes his intellect is superior to anyone else, so he frequently cuts off both the AI and the MC and likes to mansplain things.
Voice: Not very deep, frantic, nerdy, silly, confident. Think of a stereotypical mad scientist!
Lines for auditioning:
"Remember, there's always 91289." (Casually threatening Nova the AI that she can be replaced by a newer model. The tone should be casual, happy and teasing; maybe with a bit of a "melody" to it)
"She's just a robot." (Dismissive, matter-of-fact)

Lily - The Succubus:
Gender: Female
Personality: Confident, sarcastic, casual, witty, confrontational
Other details: She quit her job as a succubus at the 'legal department' and became Satan's personal manager. She's very competent at her job and acts very professional when Satan is around, but she's much more casual with the MC.
Voice: Feminine, capable of sounding both relaxed and professional.

Daria - the teen vampire:
Gender: Female
Personality: Energetic, young, talkative, modern, active
Other details: She's Felix's 'sister' (part of the same coven). She's the opposite of Felix in many ways: She's keeping up with modern fashion, trends and technology, and while Felix is very posh, sophisticated and introverted, Daria is more casual, outgoing and relaxed. Her style is a mix of goth and sporty.
Voice: Energetic, talks like a teenager. Black voice actors are encouraged to apply since the character is black!

Lines for auditioning:
“Hey, you weirdos!” (happy, energetic, humorous; she's greeting Felix and the MC)
“Okay, quick vibe check." (she's sensing something's going on that they're not telling her)
“I wouldn’t be where I am now if it wasn’t for you.” (genuine) 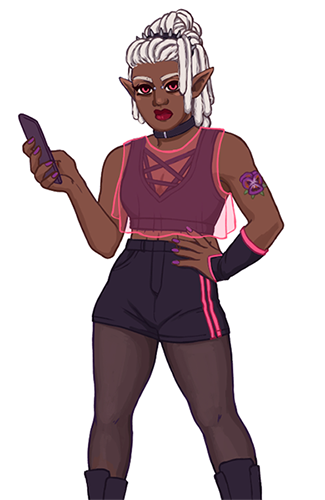 Emailed you!
Commission me for music!
Top

Not applying, just wanted to say that this premise is AMAZING and I'm so excited to play it. Bit sad that it doesn't look like I can date the mad scientist but it's all good, I'll be happy getting to know everyone else. I followed yall on twitter and signed up for the mailing list right away. <3
Have confidence. Let go of perfectionism. I love you!

You can also keep up with me on Twitter and Itch!
Top

Thank you!! That means a lot to me :) We're trying to make the best game we can and hopefully you'll enjoy it once it comes out!