I love your backgrounds.

Hm, it's been a while since I've posted anything. I'm still working on Tenkeiteki Tokyo although the last two months were a bit slow, there was a lot of Snooker on the television

Still doing the animation for the intro. The short 2 second ones where the characters do a little dance while their names are being shown take about a week to finish (1-2 days for the pencil sketch, 1 day for tracing on the computer, 4 days of coloring). The real killer is the opening shot where the logo of the game flies backwards through a Tokyo shopping street.

It seemed like a good idea at the time. I wasn't kidding when I said I'd be happy to just finish the intro this year

Here's one I just finished today (of course there will be a background and his name behind it).

Still in love with all your work, and highly anticipating this release. I know how time consuming animation can be... best of luck in pulling it all together. You've done an amazing job thus far, and I'm amazed and inspired by your commitment! Looking forward to more!

Thanks! Tenkeiteki needs to wait till after NaNoReNo though. As long as I finish it before the Summer Olympics of 2020, I'll be happy (the Olympics play a part in the story).

Amazingly, Tenkeiteki started off as a 2 month project. At the time I didn't realize that it wouldn't be the first two months of the project in which it would be finished but the last two months

Has it been 2 months already since my last post here? Still working on the intro. Finished the part of the logo flying through a shopping street while transforming into the Ameyoko sign (the line version of that is earlier in this thread). I'd show a gif but the thing is over 15 megs in size and I don't think it's decent to fill a thread with images that size

So I'll just post a single frame of a 48 frame animation. Besides : a still image shows the details whereas the animation flies by in 3 seconds (16fps)

Edit : And post a link to the first 10 seconds of the intro Intro.mp4 . Geez, could have come up with that sooner 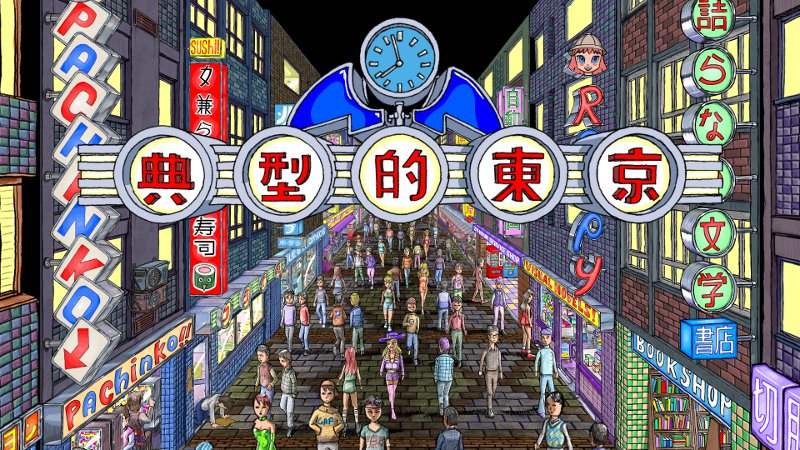 Animation is still very much a learning experience for me and one thing I learned from this part is that all of the detailing is completely lost when the animation runs. I can only hope some people pause the animation to see all the subtle jokes I put into it

The astute viewer might note that the perspective seems off. That's because it's a fake perspective. The shops, the groups of people and the ground are only drawn once instead of 48 times. Each shop is 0.6 times the size of the shop closer to the viewer and it takes 4 steps for a shop to travel its own distance (0.88 * 0.88 * 0.88 * 0.88 equals about 0.6). All the shops are the same size for the sake of simplicity. A couple of simple calculations give the correct resizing factor, placement and visible part of the shop as shown below. A dead giveaway for this fake perspective is that the shops appear to become wider the further they are from the viewer while they should all be the same size.

Of course, with such a fake perspective, one runs into trouble near the vanishing point. Luckily my big Tenkeiteki Tokyo logo sits in front of it

The shops are quite big. The detail above is at 50%. The animation is, of course, 1920x1080. By the way : this particular shop reads (in kanji) : "Seppuku Clubhouse" and hands out free trials. It's this kind of subtle humor that is lost because it flashes by in a quarter of a second