This is This and That is That [Kinetic][Drama][Complete!]

This is This and That is That [Kinetic][Drama][Complete!]

This is This and That is That

Story:
When two people are stood up by their partners at a camping site for the night, they play a dangerous game that dig at their biggest secrets.
A story purely told through dialogue with limited art.

Characters:
Morgan - A cautious person who hates being left behind.
Cameron - An eccentric person who is probably too curious for their own good.

About:
A very short story that's less than 30 minutes.
WARNING: Brief mention of substance abuse and domestic abuse, but no explicit details.

Comments and thoughts are encouraged! 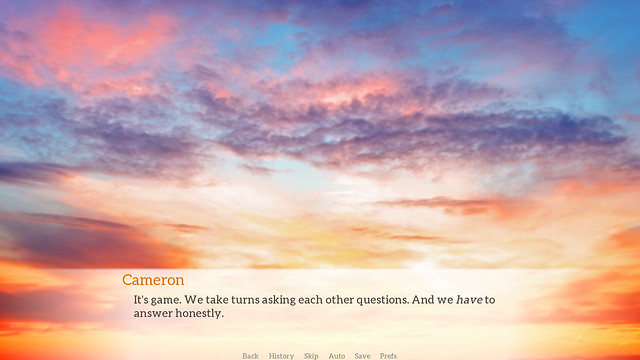 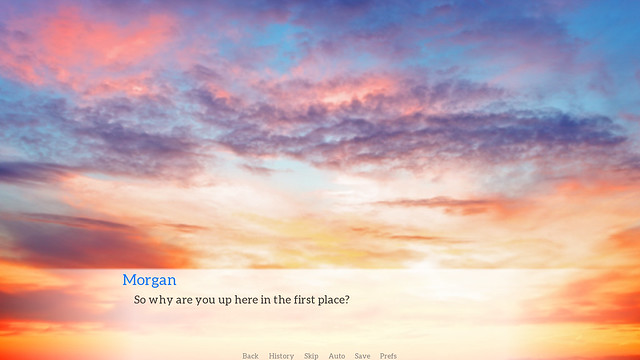 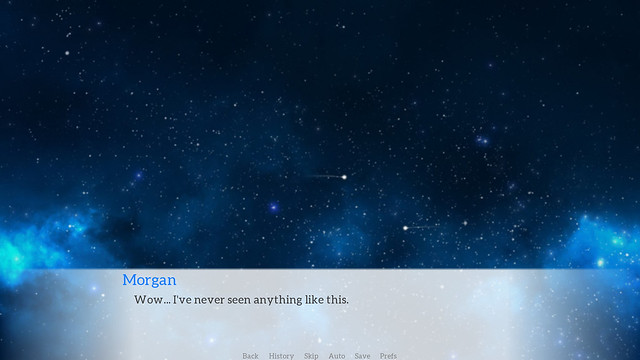 Re: This is This and That is That [Kinetic][Drama]

I think you've got everything you need here for a great 30 minute game.

The premise succeeds because it asks a simple question ("What are these people hiding?") and promises to deliver the answer quickly. That kind of direct setup / payoff captures my interest in a way most premises don't, because "What's going to happen?" is always more interesting than, "Here are some awesome characters, they do some stuff."

The limited art adds to the game instead of detracting from it. I don't think this story would work with character art. By using background images of the sky, the player is forced to rely on what the characters are saying to divine their intentions and personalities rather than relying on portraits for shorthand. This cuts out pre-made assumptions on the player's part. I had a sense that the player was looking through the eyes of the characters as they stared up at the sky, which made me feel close to them in a way that seeing them on screen wouldn't allow for.

The music is soothing, but also just a bit...off, with a melancholy kind of inevitability. Together with the disembodied perspective of the player, it creates a surreal feeling, and a tension.

I notice that you keep the gender of the characters ambiguous by using unisex names and avoiding pronouns in the game description. Interesting choice. I assumed at first that they were both gay, which I thought was an unusual coincidence for two strangers, then I remembered that those were names used by both men and women, and it drove home the point of just how little I knew of these people.

The major problem right now is the grammar. I think the dialogue is solid enough, but it is riddled with errors and awkward turns of phrase. If this were a finished game, I'd turn it off after the first few sentences for that reason alone, but that's something that can be proof read and edited.

I think this has a lot of potential if you can clean up the writing and deliver on the tension you've set up.
Top

Re: This is This and That is That [Kinetic][Drama]

Hello! Sorry for such a late reply, but I just wanted to say thank you so much for such a detailed comment. I'd quote the whole thing, but I don't want this reply being super long. Seeing your comment has been a great motivator to get this little mini-project finished — this was literally originally a project I'd do over winter break/month — almost a year later.

And thanks for pointing out that my sentences were pretty rough. I tried making the dialogue a bit more natural, so I hope there's a definite improvement in the final.

Thank you again for leaving such a thoughtful comment! Best luck to you and any project you're working on!
Complete: This is This and That is That
Top

Re: This is This and That is That [Drama] [Complete!]

Downloads:
Mac File
PC File
Linux File
Complete: This is This and That is That
Top

Re: This is This and That is That [Kinetic][Drama][Complete!]

Hi. I know I'm kinda late, but I downloaded your game for curiosity's sake. It's very sweet! I thoroughly enjoyed going through it, even if it was quick. Even though I couldn't see the characters, I came to care for them without issue. I agree that not using sprites worked out. It reminded me of reading an actual book where I let my imagination do the work. It was an idea I would have never considered but works perfectly in this short but sweet tale. The subject matter is kinda touchy, so props to for you taking the plunge. I'm still kind of a coward when it comes to writing about that kind of stuff.

There were a few spelling errors here and there. I don't know if you've gotten the chance to proofread it, but I'd look in to that. Personally, unless the spelling is absolutely atrocious, it's not a turn off for me, but it might be for others.

The names threw me off as well. No clue if that's what you were going for, but if so, good show. Not really relevant, but my name is Aaron, so when I saw it pop up in the VN, I kinda got a giggle out of it.

I enjoyed the game. Sorry, I didn't leave a more detailed review. Still getting used to reviewing stuff. I don't know if you have anything else planned, but keep up the good work!
Top

Re: This is This and That is That [Kinetic][Drama][Complete!]

Ooh oh oh! This looks promising! I doubt that I'd be able to give as good comment as the other two have done, but I'll download it and tell you how I enjoy it! I'm just starting off in making VNs, so I'd like to see others as learning experience too :3
Sleep, eat, game, write, repeat! Wait, don't forget to pet cat!
Top
Post Reply
6 posts • Page 1 of 1