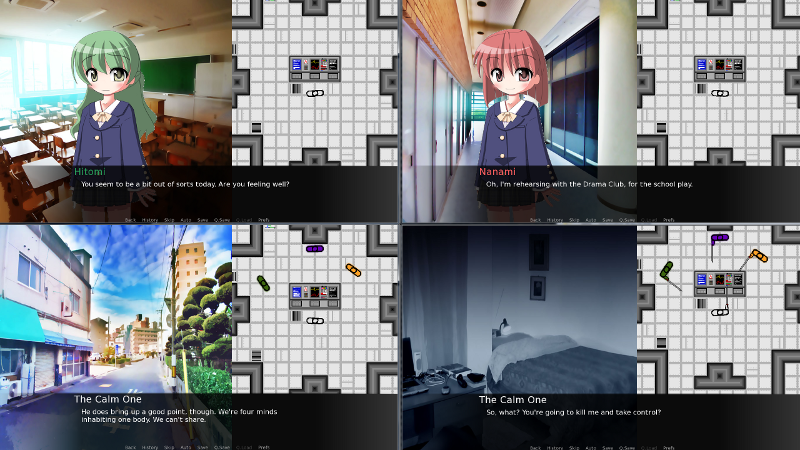 Overview:
This is a short game I made for Ludum Dare 41. Since the competition theme was "Combine Two Incompatible Genres", I decided to go ahead and try combining a Visual Novel with a Top-Down Shooter.

This is the first time I've ever written a visual novel or worked with Ren'Py, and I'm quite proud of how it turned out (even as incomplete as it is).

Technically, it's available to the public on itch.io. Really, though, since I made it for the Ludum Dare Jam, there are a lot of features and parts of the story that I had to leave out, for lack of time. I'm going back now and adding those, though it will take a while.

Plot:
You are a voice within the head of a typical dating sim main character: Kei.

Unfortunately, you're not alone within your mental control center: several other voices have just appeared out of nowhere. They have their own goals, and they're not afraid to use force to achieve them.

Meanwhile, in the outside world, the School Festival is coming up in three days' time, and if you can keep control, then Kei might just be able to find love at the festival...
...or, alternatively, you can just let the other voices take over and watch what hilarious and horrifying antics they get up to while at Kei's controls.

I'd really like any feedback or criticism you all can offer about the story, gameplay, or really just anything in general.