Discuss how to use the Ren'Py engine to create visual novels and story-based games. New releases are announced in this section.
Forum rules
This is the right place for Ren'Py help. Please ask one question per thread, use a descriptive subject like 'NotFound error in option.rpy' , and include all the relevant information - especially any relevant code and traceback messages. Use the code tag to format scripts.
Post Reply
14 posts • Page 1 of 1
Message
Author

Looking at my post for the fifth anniversary of Ren'Py, I realized that today marks the fifteenth anniversary of the start of Ren'Py's development. So, I thought I would take a little time to write about that.

This morning I was reflecting on how Ren'Py has changed over the past five years or so. And weirdly, I sort of compare it to what a child goes through in their life during these same years. For the past decade, it was pretty clear what the direction of Ren'Py would be. Well, not entirely - I went off on a ton of tangents. But I had set out some goals for Ren'Py 7 years and years ago, and last year, those were finally achieved.

For me, the story of Ren'Py is the way it's coming into its own. For years, it was a project made up of mostly my own work, but it is now getting a regular stream of contributions from others - features, bug reports, even ports to platforms I never thought possible. (And that's not the only one. :X) When I first started developing Ren'Py, I thought there might be 50 games made with it, tops. As of this writing, Ren'Py has been used to make thousands and thousands of games - and even been the star of a few of them, something I never would have even thought of.

Right now, for the first time in a long time, I really have no idea where Ren'Py will be in five years, as I and others work to guide it to new places. Ren'Py's future has opened up a bit - if I had to stretch a metaphor, it's getting to the point in the teenage years where the direction of your life is no longer completely set out by your parents, and there are many places you can go. And I'm here proud of all the places Ren'Py has been, just like I am of all the places it's going. I look forward to being a part of that future.

I'd like to thank you for reading this, everyone who's worked on it with me, everyone who's found problems for me to fix (or tested and not found any), and of course, everyone who creates with Ren'Py.
Supporting creators since 2004
(When was the last time you backed up your game?)
"Do good work." - Virgil Ivan "Gus" Grissom
"Silly and fun things are important." - Elon Musk
Software > Drama • https://www.patreon.com/renpytom
Top

Wow!! 15 years! Thanks again for everything PyTom! We really appreciate all that you have done for us.

Wow, I had only been around for a year as of your 5th year post. Feels wild that it's already 15. I'm happy to see how much the community has grown over the years. Looking forward to seeing where it goes from here.
sakevisual visual novels (and stuff) | sakevisual dev blog
Top

Thank you for all your hard work PyTom. You are the best parent Ren'Py(eileen) and EVN community could have gotten!
If you want any help in Ren'Py programming, drop me a message!
(I don't bite... at least not most of the time :3 )
Top

Man, time flies -- I've only been around for about 5 years, but even in what I remember Ren'py has come so far. Kudos and deep, deep thanks as always to PyTom and everyone else in the community who helps keep this engine growing.
Top

Funny enough I started being indie more or less around 15 years ago. My only regret is not having discovered Ren'Py sooner!

Thanks for all the hard work you do!
follow me on

Hiii PyTom! Since i am new here,

I would like to thank you for creating a visual novel engine for us, really cool!

I also been learning about your documentations, and it is really helpful!

Plus, for your very good effort, we are glad for you to create such a useful engine!

My first acquaintance with Ren'Py started with version 6.9.2. (I can't imagine how much time has passed since then...) 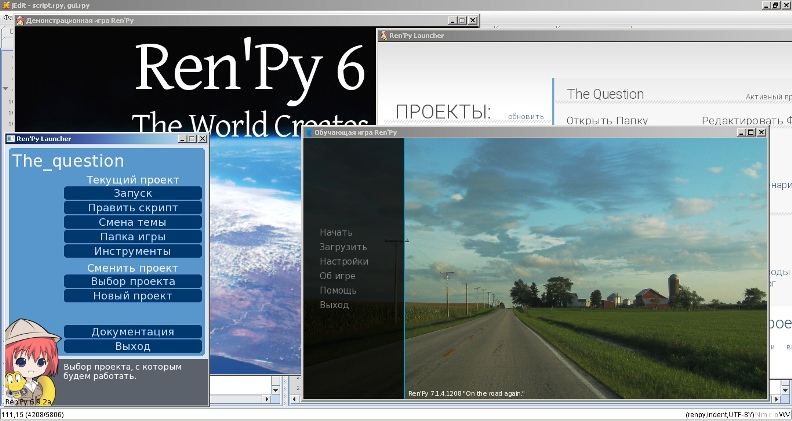 Thank you so much, Tom, for your hard work. I also thank all those involved in the development and promotion of Ren'Py.
I heartily congratulate us all on anniversary. I wish luck and success in the future!!!
There is a light at the end of the tunnel, just pray it's not a train.

Thank you so much for your hard work!
Congratulations for those 15 years

15 years... that is such a long time now... I'm happy I'm still alive to witness this milestone... I made many great memories with Ren'py... I could have gone and use other engine at that time to make my first VN and I chose Ren'py... many years later, I still use Ren'py... sometimes in unusual and unsupported ways.

You and your team's work has transformed the lives of many, many people all over the world, be they players, hobbyists, or devs. You have built quite a legacy. Thank you for everything, Tom & company.
Coming Out On Top - An Adult Gay Dating Sim
website
Top

as a really old-timer (albeit not precisely active...) I fondly remember wen I discovered ren'py (was version 1 or 2, don't remember now...) and perhaps I have given the most important contribuition (suggesting the IF community successfully recipe of a centralised forum and game repository/indexing) or not ?

I can't say, but when I pass here, yearly or so, I'm always amazed of the leaps & bounds done in Ren'py development and history.