Discuss how to use the Ren'Py engine to create visual novels and story-based games. New releases are announced in this section.
Forum rules
This is the right place for Ren'Py help. Please ask one question per thread, use a descriptive subject like 'NotFound error in option.rpy' , and include all the relevant information - especially any relevant code and traceback messages. Use the code tag to format scripts.
Post Reply
5 posts • Page 1 of 1
Message
Author

I'm working on something else I intend to give to the Cookbook/Public Domain, and it's coming along okay but I need some help (project files attached below). 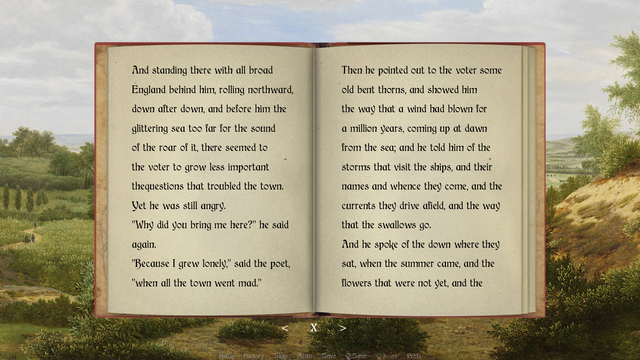 I'm displaying a book object with pre-defined text (so that many books could use this same code). It is supposed to do the following:

1. open as it drops in from the top of the screen (or close as it flies off the screen) --- mostly working
2. displays pre-defined text on two facing pages that change with buttons to go to the next or previous page --- working totally fine
3. uses an animated page flip graphic, which displays as the pages change --- sort of working
4. as the pages change - the displayed text should be hidden before the replacing page's text is revealed - and it should be hidden with either:
a. a transform that changes the xzoom, to squish its width as if it is turning with the page
b. an image dissolve that wipes across the screen as the page turns
5. the replacing text should be displayed using the same sort of transition.
4. & 5. --- not working at all. I have no idea... well I have some idea*

Currently, the code changes the displayed text INSTANTLY (then plays the page turn animation, which is kind of awkward) - I mean, that's how I coded it, so this is not unexpected. But I'm not sure how to reconfigure it to get a transition in there, or have new text appearing as the old text is being hidden, since it's currently set up to only display the current text and replace that display with the next text.

I don't know how to get any farther than this right now, but I'll keep working on it. I could really use some coding help.

Step 11. I figure out how to code any of the stuff I just said!

The project files are attached (updated since I originally posted):

You should use a function that trigger the animation, the animation that receive the computed parameter from the function, and the Function action.

Thanks for the suggestion. I've been looking into it, but I haven't been able to figure out how, where, or when to implement it. I've polished up my code since my original post, and things are working a little better, but...

For the moment at least, I'm really hitting the wall.

I hadn't seen that (and I've searched so much!) but that's very close to what I'm trying to do! Andredron does lots of interesting stuff. I'll see if I can work with it.
Top
Post Reply
5 posts • Page 1 of 1