The Blind Griffin is an otome game being developed by Asphodel Quartet for NaNoRenO 2015. Our team is made up of artists Auro-Cyanide and Rins, writer/programmer Lorelei, and composer/musician Noyemi K. The game will feature three different character routes (Giovanni, Alexei, and Emilio) and will have 12 different endings. The game will be free, with a pay-what-you-want system in place for people who'd like to leave a tip.

S T O R Y
It’s the roaring 20’s. Alcohol-loving Americans are chafing underneath the restrictions of Prohibition, but speakeasies have thankfully risen to fill the void with ill-begotten booze. The Blind Griffin is one such speakeasy in San Francisco, California, but it’s about to go out of business...because its employees are a den of magicians who are more concerned with their magical studies and experiments than moonshine! Desperate not to lose the building that has become their haven, they hire the first streetsmart guttersnipe they find with some experience to help turn things around, but could she perhaps turn out to be the strongest magician of them all? 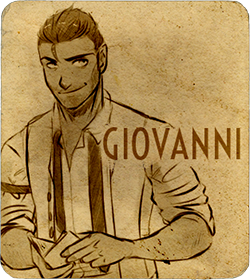 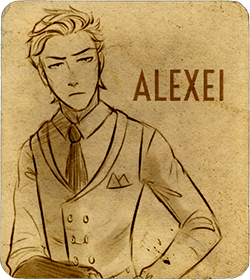 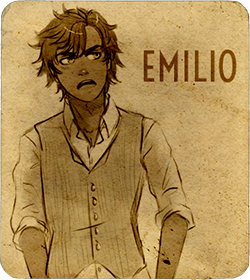 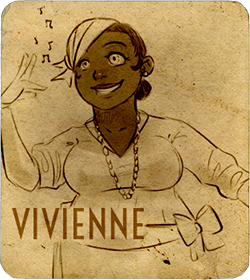 GIOVANNI (GIO) // The speakeasy's premier violinist. He moonlights as a saxophone player but he's awful at it (nobody tells him). The laid-back older brother of the group and widely regarded to be the strongest magician of the coven, Gio takes the safety of the group as a whole very seriously. Specializes in earth magic.
MARIE // The owner of the Blind Griffin. She was disowned by her high-class family because of her gender identity, but is allowed to keep the building provided the business turns a profit. Cultured and delicate, Marie is unfortunately a busybody for whom money seems like it's water. Do NOT make comments about her height.
ALEXEI // The displaced nobleman. He and his family were part of the Russian imperial court, but had to emigrate to America after the revolution. Though he acts cold towards people he's unfamiliar with and comes off as blunt and awkward at first, he is actually kind at heart and easily flustered. Specializes in water/ice magic.
EMILIO // The working class baby of the group. Emilio is the most junior member of the coven until the heroine arrives. His family runs a small bistro, but they barely make ends meet. His bad experiences with non-mages have put a chip on his shoulder and added fuel to his already hot-tempered, megalomaniacal tendencies. Specializes in fire magic.
??? // The heroine. The youngest child of a large Chinese family, she had to make herself useful from a young age and thus never received any formal education. She is practical, street-smart, and no nonsense. For some reason she hates her actual name so she goes by a nickname (that the player sets). The extent of her powers is unknown.
VIVIENNE (VIVI) // The songstress. A city slicker originally from New York, she saw Bessie Smith performing live once and was so totally star-struck that she decided right then and there that she would put her all into becoming a singer. Vivi is bubbly and sweet-natured, but also quite headstrong. Specializes in air magic.

S T A T U S
Writing/Programming: About 25% through Emilio's route.
Art: BGs and sprites are being lined.
UI: Almost done!
Music: About halfway!

We'll be keeping this thread updated as we work, but you can also follow each of us on Twitter for more updates, as well:
- Auro-Cyanide
- Lorelei
- Rins
- Noyemi

Thanks for reading and good luck to everyone else participating!
Last edited by Camille on Sat Apr 04, 2015 7:57 am, edited 2 times in total.
1/2 of Cyanide Tea | Break Chance Memento (BL) | Spirit Parade (Otome) | Portfolio/List of Works/Contact
I'm not around LSF very much these days; please contact me via Skype/Twitter. Ask me things!
Top

Oh my gosh! A historical piece, and one set in a speakeasy!

I can't wait to see what y'all make of this.

All the character designs are so nice! I love the art style. <3 I also like the blend of magic in historical fiction. I'm looking forward to it!
Top

I look forward to it.

I CAN'T WAIT TO SEE THE FINISHED ART ASSETS FOR THIS T____T Just thinking about two great artists joining forces is enough to make me drool HAHA;;; Excited to see what story is in store for us this time....

I stayed up too late last night when I got home in order to complete the GUI since time is of the essence. I still have a couple minor things to do and I need to clean the files, but the main bit have been designed.

These are some bits of the designs: Once that is done tonight I will be going straight into doing the sprites. Rins and I are tag-teaming all the art so I need to be on the ball. I'm a bit nervous since it's been a whole year since I did sprites last -.-;
The other 1/2 of Cyanide Tea l My Deviantart Account I My Tumblr Account I Break Chance Memento
Top

I wish you the best of luck with this!!! It seems super interesting so far!

I am so excited. Love the setting, characters, art, everything maybe I should draw fanart already

Very excited to see how this turns out! It looks fantastic so far

I'm really excited about this VN! I really like the 1920s setting (and I like how the art style reflects that), and mixing that with fantasy elements makes it very intriguing.

Blimey this looks and sounds incredible! Excited to see how it comes along and getting to play the finished thing

I always love your games, so I'm excited for this one as well. And I also like how it's based in a time period that's not too common in VNs. Good luck!
https://twitter.com/Yoshebb
Top

Woot, this sounds like a ton of fun and the designs are so nice, I love the outfits and expressions

I love this! The 20's setting is awesome and I'm totally digging the Asian protagonist wearing a newsie outfit of trousers and suspenders XD
And ofc the GUI is amazing!
Good luck! Definetly looking forward to this one by the end of the month!!
Top

Thank you everyone! I hope we can live you to your expectations.

I finished inking the base for the MC (2 arm poses, 3 outfits, 3 hair styles). I'll do the emotions tomorrow. I'm only doing the inking, Rins will be colouring