A place for game announcements, and for people to discuss games being made.
Forum rules
Please read the sticky before creating a new topic. Linking to Kickstarter/Crowdfunded games requires a demo. Updates to Patreon-backed games may be posted once every 2 months. Adult content should not be posted in this forum.
Post Reply
27 posts
Message
Author

This Page is Currently Under Construction! Thanks for Your Patience! Will Update with More Progress!

Love is Blind is a story with unique elements and scenarios(Also my very first VN). It took time to figure out what I wanted to say through this story and the project name changed twice. At first I called it 'I Do, I Don't..' But it didn't fit the way I wanted this story to go. I wanted to bring out different POVs and I wanted to tell stories of all the characters from one person, The female Protagonist. If I stuck with the first title it wouldn't be fun because I would have to all of the follow unwritten rules to VNs, Otome, and dating sims games. Because I wanted to be different and I wanted to have a VN made truly to tell refreshing stories and realistic stories, I named it Love is Blind.

When a girl, who solely believes in love it causes her to be separated from her family. Breaking away from her strict father rules, she leaves home to be with the man she loves. Only to be heartbroken and confused. The one thing she avoided when leaving is brought to her attention once again. It's time to grow up! When life and love starts to crumble down on her would she be able to take it head on?

This story follows a girl name Sora[Yuki Hayashi], who has to make a tough decision regarding love and life. In order to be her own person, she leaves her family, friends, her name, and her life as Yuki, behind in Osaka. The lavish life as a heir to a Hospital Osaka, she once lived and the name that followed her around which cause too much pain and heartbreak giving her a reason to leave it all behind. Only to end up as a broke intern living in Tokyo for the first time. A place she hasn't even visited other than going to school.

Her new life unfolds lessons that she never thought she would learn, love finds her in the city of Tokyo during these difficult times. Will she wholeheartedly fall in love but without thinking it through? Is she truly willing to lose her family after blindly falling for someone she barely knows? Is a stranger better than this man that she says she love? Or will she blindly accept this stranger offer when the circumstances is something she's against?

Each choice has it's own consequences and risks, will she choose to endure or give up halfway?

~Sora works at as a waitress at a bar, while in medical school. Can you see her apron?
~Certain parts of her stories jumps to when she's an intern.
~Sora tends to help her friends out with their relationships so they talk a lot via phone and messaging.

~He's a bit childish and acts like a kid a times.
~He was sleepy when asked to take this picture.
~There may be another reason why he likes Sora.

~There's a rumor that he's dating someone.
~ In Sora's phone his name is a bad word.
~Tomoko used to fangirl over Makoto but her love for Yuto is bigger.

~Hirito is the only one in the hospital that knows Sora as Yuki.
~Sora had a huge crush on Hirito in med school but he rejected her.
~The nurses have been gossiping about him breaking off an arrange marriage for someone.

~Yuki's childhood friend.
~ Both him and Yuki are using a secret identity.. But for the same reason? Dunno.
~Yuki is unaware of this fact but Toshi was one of the men for her possible arranged marriage.
Toshi's current placeholder..

~I need to spellcheck for his and Mike's profile.. Sorry.. I will replace the image when I re-download PS and GIMP..
~Courtney finds his crush on Yuki cute.. ^^
~Best friends with Yuto and Mike.. Also the reason he suddenly appeared in Japan..
~Yuki has mixed feeling about him and a little paranoid when it comes to him.. Wae?

~Yuto is had began to hide secrets from Sora once he moved in..
~Yuto is a trainee at Makoto company..
~It's unknown exactly how he feels about Tomoko..
~When Sora and her father argument becomes heated Yuto stepped in to help her..

~Tomoko sometimes use text (messaging) terms (in conversations) .. Yeah..
~Yuto is the reason that Tomoko, Courtney, and "Yuki" became friends.
~She has too many jobs for many different reasons.
"I think she should have her own story.. ^ ^.."
Sorry you guys the other girl was a placeholder for Courtney who I hadn't finished.. This is the completed Courtney..

~Courtney is in a arrange marriage with Jordan Carter..
~Once tried to escape to New York. Her dad bodyguards found her at the airport and forced her back.
~Being that Jordan is an Heir to an airline she avoids airports afraid she may get caught..
~Courtney father watches over her phone and saves her contacts so Court uses a separate phone to contact Sora and Tomoko..

~ Mike is closer to Yuto than Sora. But he let's Sora think that they're that close..
~ Tomoko got mad at Mike because his hair color is to close to Yuto's blonde so Mike force Yuto to dye his hair..
~ He has a huge crush on of the girls.. Who? But he can't like her..
~ Mike is the only one who gets away with calling Sora by her real name.. Which makes the others jealous..

Working on a Chapter List Page..
May go with the Basic messaging system..
Currently working on other ideas..

We are currently looking for Writers and Artists..

What I would love but is ok with:


What you will need to do right away:
~Tell me your email..
~Outlining and writing the character 1st chapter..
~Maybe a short entry of him in the prologue.. If he's not already in it..


What you will do possible after that:

~Outlining the character following chapters.. And Endings..
~Any inquires you can either PM me.. Comment Here.. Or Email @sharika.harris0825@gmail.com..
~ I check both daily..

What I will need:
~I have 6 male characters that will need CGs.. Sorry.. -_-
~But they aren't needed right away!!!!!
~Maybe 4 more will be needed for the demo..
~For the demo there aren't many BGs needed.. But the full version will differ..
~The GUI seriously need to be revamped.. HELP!!!

I'm not picky about writers are artist.. If you have just started writing I'm ok with that!!!! If anyone is willing to help!! THANKS!!!

Mostly Art for the Demo will be posted here. Screenshots, GUI concept art, and Demos for the programming..
Love Interest Selfies..

Art Made by Toki

Special Images made by Toki:
Hikari:

Hi hi, I'm Zenny Pai. Writer and Editor of this project. This WIP thread looks amazing and legit. Hell, the whole thing looks really legit. This is gonna be good.

Wow this looks great and professional!! Can't wait for the demo~~
Check my itch.io page out!

Thanks Coming ASAP!! Things working out pretty fast so it'll be soon!!


tokya2502 wrote:Wow this looks great and professional!! Can't wait for the demo~~

You can see why i'm so excited!!! Thanks Zenny!!

Sorry guys because of work and Internet no art post.. Toshi is completed so is Akira but neither designs are confirmed.. Also busy working my current ark..

I'm really sorry to ask but...
why do you do two full stops at the end of sentences?
Pronouns: They/them or He/him
Top

I can't wait to play hte demo! All of the characters seem so interesting! >w< And the story too!
Top


Rinima wrote:I'm really sorry to ask but...
why do you do two full stops at the end of sentences?

Yay!! A fan and yes.. The demo is soon!! I just haven't updated the post in a while but will start sometime this month.. I have to fix the laptop with all the art on it.. So sorry!!


Harmonywish wrote:I can't wait to play hte demo! All of the characters seem so interesting! >w< And the story too!

Updates!! Images of my confusion!! Please Help me chose Toshi...!!

As you can see I'm too mentally lost!! Help!!

Akira Design!!! Actual Design!! Which to Keep which to let go!!As you may see Akira place holder looks a hot mess.. Might let it go!! 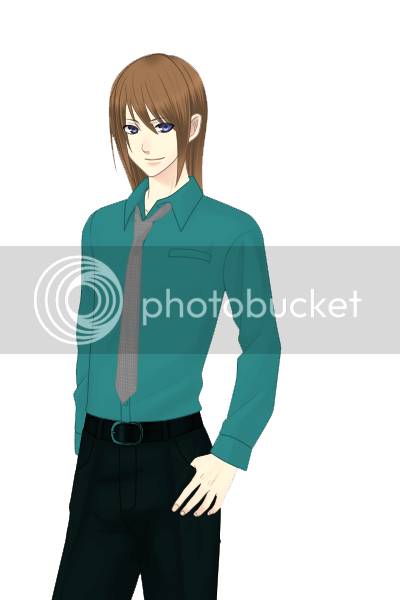 And yes certain aspect of the facial is different!!