A place for game announcements, and for people to discuss games being made.
Forum rules
Please read the sticky before creating a new topic. Linking to Kickstarter/Crowdfunded games requires a demo.
Post Reply
15 posts • Page 1 of 1
Message
Author Emory is an 18 year old noble of Sharan, a wealthy kingdom made even wealthier by Emory's father, an entrepreneur and prolific business man who's been the king's aid for all things finance for years. As such, Emory is best friends with the king's only child, Cordelian, a 19 year old boy who's being prepped to take over the kingdom. Along with Cordelian, Emory spends their days with Lisia, their personal maid, and Marco, Cordelian's butler. However, Emory's daily, carefree life gets a small wrench in it when they finally meets the princess of a neighboring, rival country, and finds out that Cordelian and her are engaged...

As the main character of the game, Emory's name and gender can be changed- Emory can be male, female, or neither. Emory is a business major like their father, and is typically studying international business law. Even though Emory is the one studying international business, Cordelian is the one with the love for travel. He loves every second he can get outside the castle, and eagerly agrees to his parent's wanting him to build relations with neighboring countries- if only to see the sites and such. When they were younger, Emory would frequently accompany him, but now as they get closer to being 20 years old they've gotten more focused on their own futures, Cordelian especially. At first, she seems like the standard princess- aloof, quiet, and cold. However, after talking to her for any longer than a quick conversation, you can see her quietness is a side effect of her social awkwardness. Despite being a princess, her royal advisers fix most everything for her, from her day to day routine to even most of what she should say. She is set to marry Cordelian to better relations between their countries, which have been on edge for years. Katherine is 18. She's bright, she's bubbly, and she's your personal maid. Lisia loves frilly things, dresses, coronations, princes, princesses, dances, flowers... she loves just about everything. However, she can be a bit clumsy and clingy, much to Emory's mother's dismay. Lisia is 17. A true workaholic, Marco spends almost every waking minute working. He doubles as Cordelian's personal servant and one of his advisers, but his duties don't stop there- he's also the decoration and planning coordinator for dances in the castle, Cordelian's scheduler, and- the castle's gardener. As part of a de-stress project the king and queen assigned him to, Marco takes care of the greenhouse on the castle grounds and organizes the gardening, something he's shown he's passionate about. Marco is 20. So... what is Paths Taken? Haven't I heard it before?
Hello there, Miko speaking! Prince's Choice, as it was originally known as, is an old otome I started back in 2014 and never finished- the furthest I got was a demo, and nothing else after years. However, it's now being rebooted/finished with a completely new look- being rebranded as Paths Taken- and new writers- I'll be doing everything art and programming wise while my lovely two writers will be focusing on writing!


Now, on to some actual details! Path's Taken will be a free to play dating sim coming out on Itch.io and will be about 2-3 hours long. The player can change the main character's name and gender (male, female, or neither)- changing the gender of Emory will change nothing gameplay wise except for how the characters refer to you as; so, no routes will be locked by picking different genders, all four routes are unlocked from the beginning. This looks super cute! Protag gender choice is always a good thing, and I love Katherine, she seems like a sweetheart and that long dark hair is gorgeous.
hey hey I made a thing
Top

Ohhhhhh my goodness, I love love love the new art!! I know I already posted about Katherine but I have to do it again, she's too gorgeous. I'm also loving Cordelian's color palette.
hey hey I made a thing
Top

Ohhhhhh my goodness, I love love love the new art!! I know I already posted about Katherine but I have to do it again, she's too gorgeous. I'm also loving Cordelian's color palette.

Thank you so much! We hope to be able to show more art soon along with a demo ♥

Update 9/19:
The demo has now released! Play it on Itch.io to get a taste of what the full game will be like.

The demo is now updated with a few fixes, edited art, and now an android version! Check it out below~ 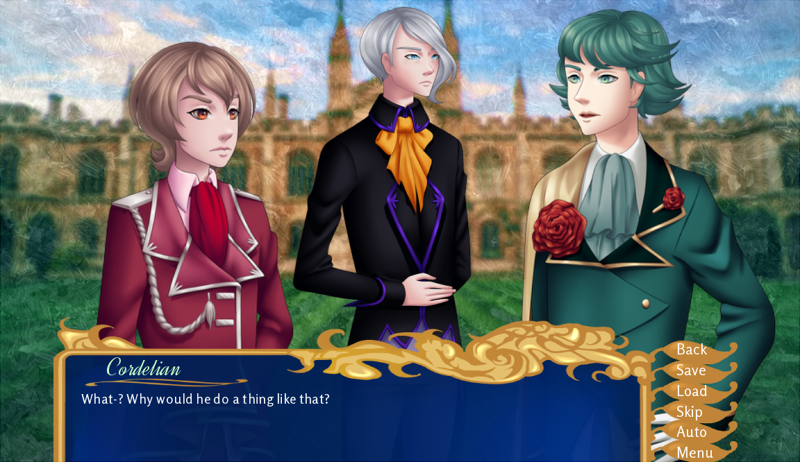 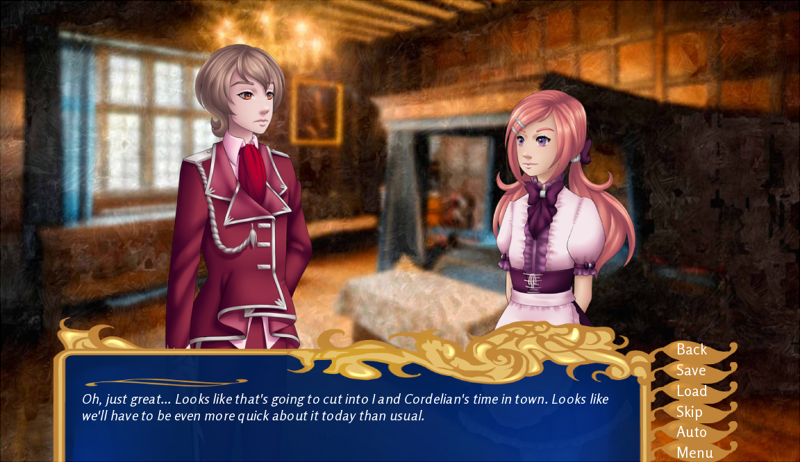 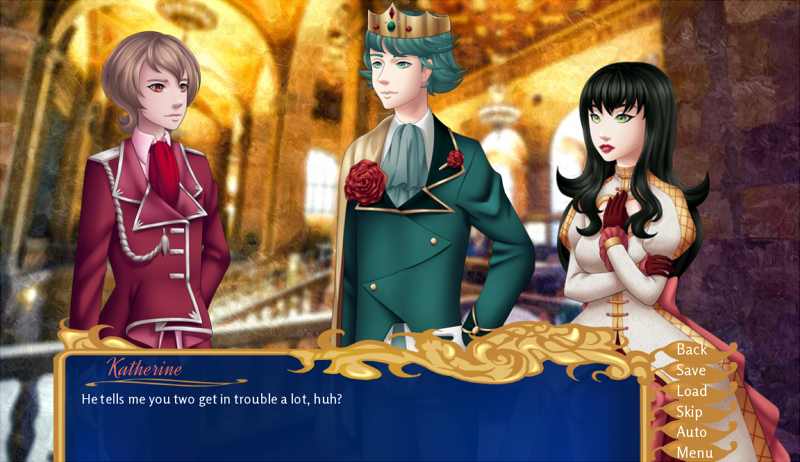 Hi guys, here's a preview of the post-demo game! We're hoping to start beta testing Marco and Lisia's routes by the end of the year. 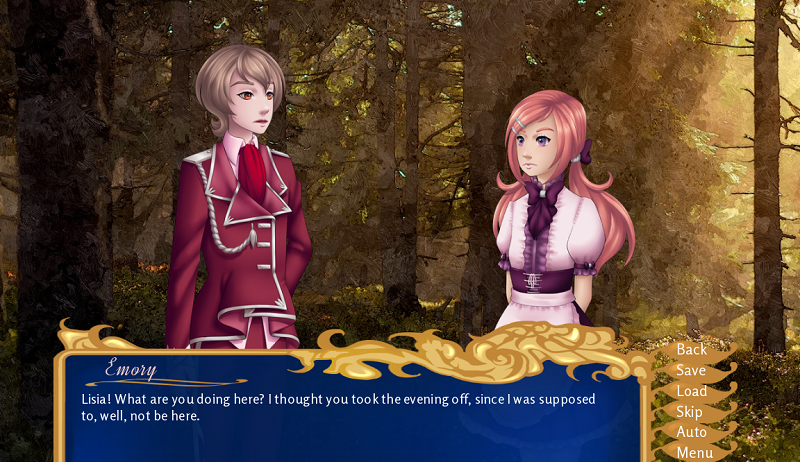 First update of the year- whoops! Development has slowed some but there still has been some progress made. For example, here's a recently added scene, a new day if you pick to spend the day with Marco.

As always, you can download the free demo here and join our Discord! ♥

Who's Emory making chocolates for? You can decide in the full game, coming soon~!

Katherine and Cordelian's common route is coming along nicely! Here's two screenshots from it. Cordelian is having doubts about something... but is it about his country, or something else?

As always, you can download the free demo here and join our Discord! ♥

Ooh neat, looking forward to this! The art is cute and I'm fond of the story idea and the characters from what I've played in the demo. Cheering you on!
Top

Slowly but surely, progress is being made! We're hoping to have the game completed by the end of the summer. For now, here's an updated screenshot with more polish now.

For a shot by shot look at how we went from the previous screenshot to this one here, you can see a mostly step by step look here.


We also have a survey right here for anyone who has or hasn't played any of our games! It would be extremely helpful if you fill it out- it only takes 2-3 minutes!

We have plenty of updates for Paths Taken from the past couple weeks! For one, Katherine and Cordelian's routes are now finished! Both are worried about something- is it the looming threat of war... or something else?

Our second update is the inclusion of different looks for Emory!

This feature was requested a good amount so we went ahead and added it- hope you guys like it!


Lastly, Paths Taken now has a Steam Page! Wishlist it so you're notified when it releases for free!

Paths Taken is now fully released! This game has been over 4 years in the making, starting from the original concept, and I'm glad to see it finally see the light of day in a finished state. I hope you guys enjoy it!